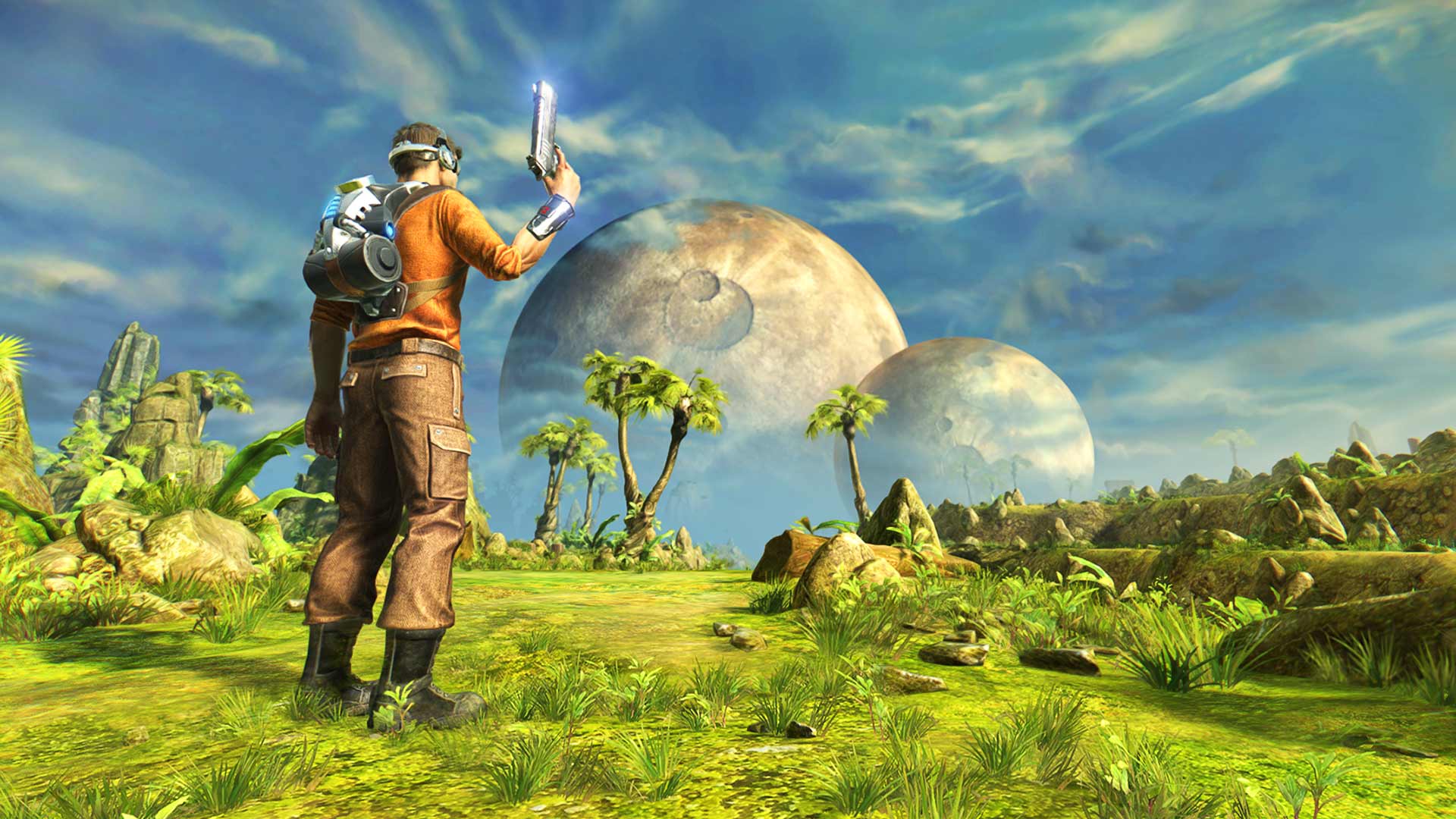 For many gamers who spent countless hours traversing the breath taking worlds of the original Outcast, news that this priceless gem has been remade for next gen consoles was nothing short of Christmas, Valentines Day and a significant birthday all wrapped up in one shiny, mouth-watering bundle.

Developers Bigben Games set their sights on revamping this classic in all its original glory with the added benefit of the PS4’s monster processing power – an element that was pretty much undreamt of back in  1990’s .

For anyone new to the Outcast franchise,  the story is somewhat reminiscent of the original Stargate.  You’re cast in the role of tough as nails Commander Cutter Slade who’s given the unenviable job of escorting a team of scientists to another world where they hope to stop a vortex that’s threatening to engulf the Earth.  As you can imagine,  nothing this easy is ever this simple.  Once you make your way to the other world,  you lose your scientists and all of your equipment and, if that wasn’t bad enough,  the local population called the Talan are convinced that you’re a prophesied savior called Ulukai sent to deliver them from the oppression of the Fae Rhan.  As a seasoned man of opportunity,  you  strike a bargain with the Talan; if they help you find your missing eggheads and gear,  you’ll help free them from their oppressors.  The intriguing plot provides a wonderful background for an opportunity to travel through numerous vibrant worlds,  meet aliens of all backgrounds and, more interestingly,  varied back stories. 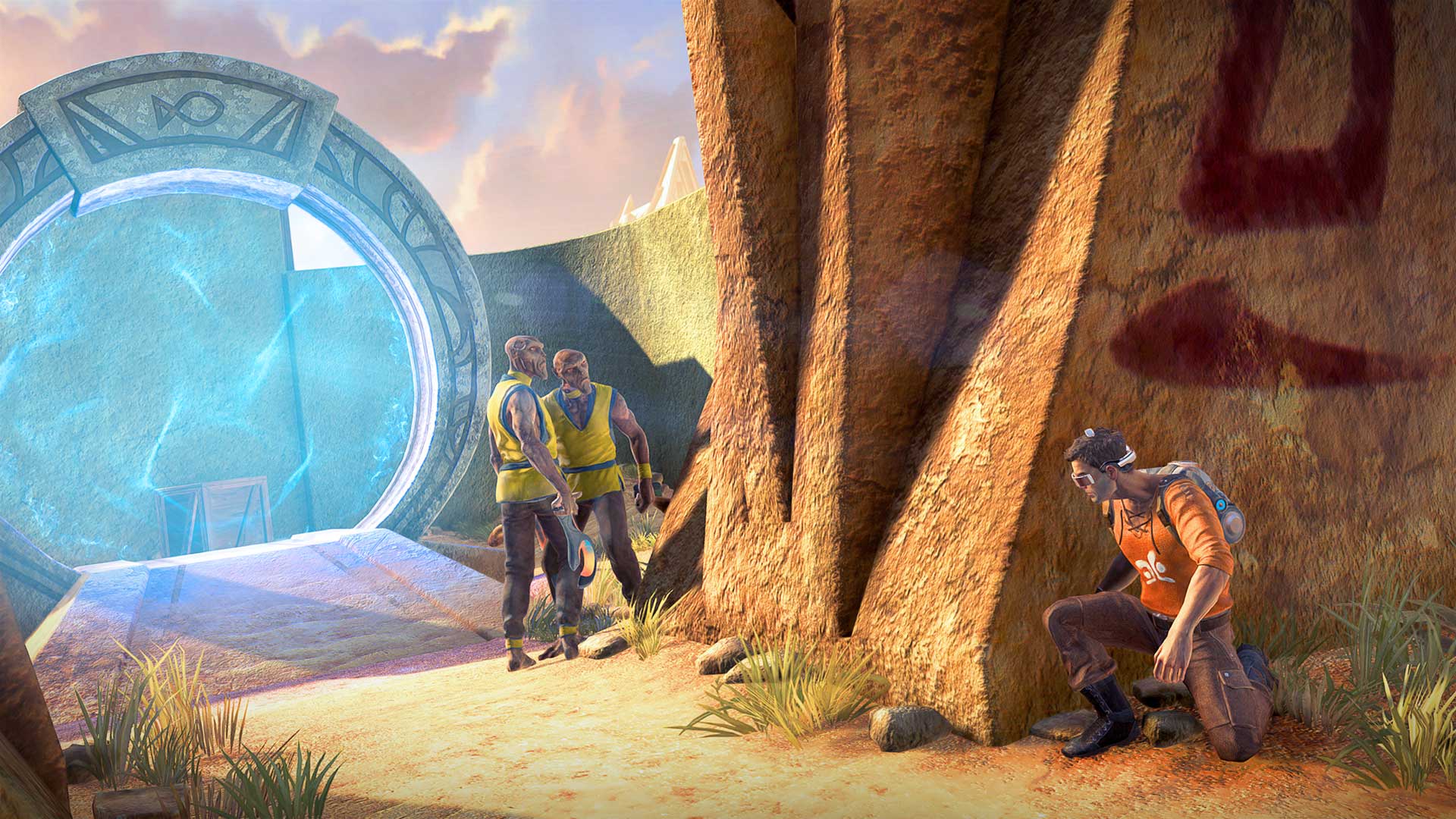 One of the things that helped the original Outcast stand out from its competitors was the (then) revolutionary idea of creating living worlds with indigenous people who went about their lives irrespective of what you did.  Yes, we know GTA has nailed this down to a fine art.   But, trust us,  back in the early 90’s this was something huge.

From the very start of Outcast Second Contact, you’re reminded that this is truly some old school flavor that you have to savour with your neighbor.  The opening hand drawn storyboards are reminiscent of an age when engaging dialogue was the driving force behind games and details were painstakingly spelt out.  Fast forward to the alien world and you’re presented with lush, colorful panorama’s, beautifully drawn landscapes and distinct architectural designs that tell their own sad and noble stories.  Back in the 90’s you would have needed a ninja PC with the processing power of a mini nuclear reactor to have just played the opening level of this game. On the PS4, it runs smoother than butter off a hot knife.  Excellent.

As you make your way through the game you embark on a variety of side quests,  take on alien soldiers, recover missing Essence Stones and hunt for missing people.  It’s all pretty standard RPG fare, but done in a style that’s undeniably engaging and challenging enough to make you want to come back for more.

In the audio department, it’s worth remembering that this is a plot driven  RPG and, bearing that in mind,  you need to be prepared for lots of dialogue.  There’s also a subtitle option on the screen which includes (sometimes) helpful reminders of who’s who and what certain words mean.   For the first few minutes of playing Outcast Second Contact these gentle reminders were useful.  But as most of the characters were more than happy to explain almost everything to you,  we could easily have done without these on screen reminders. 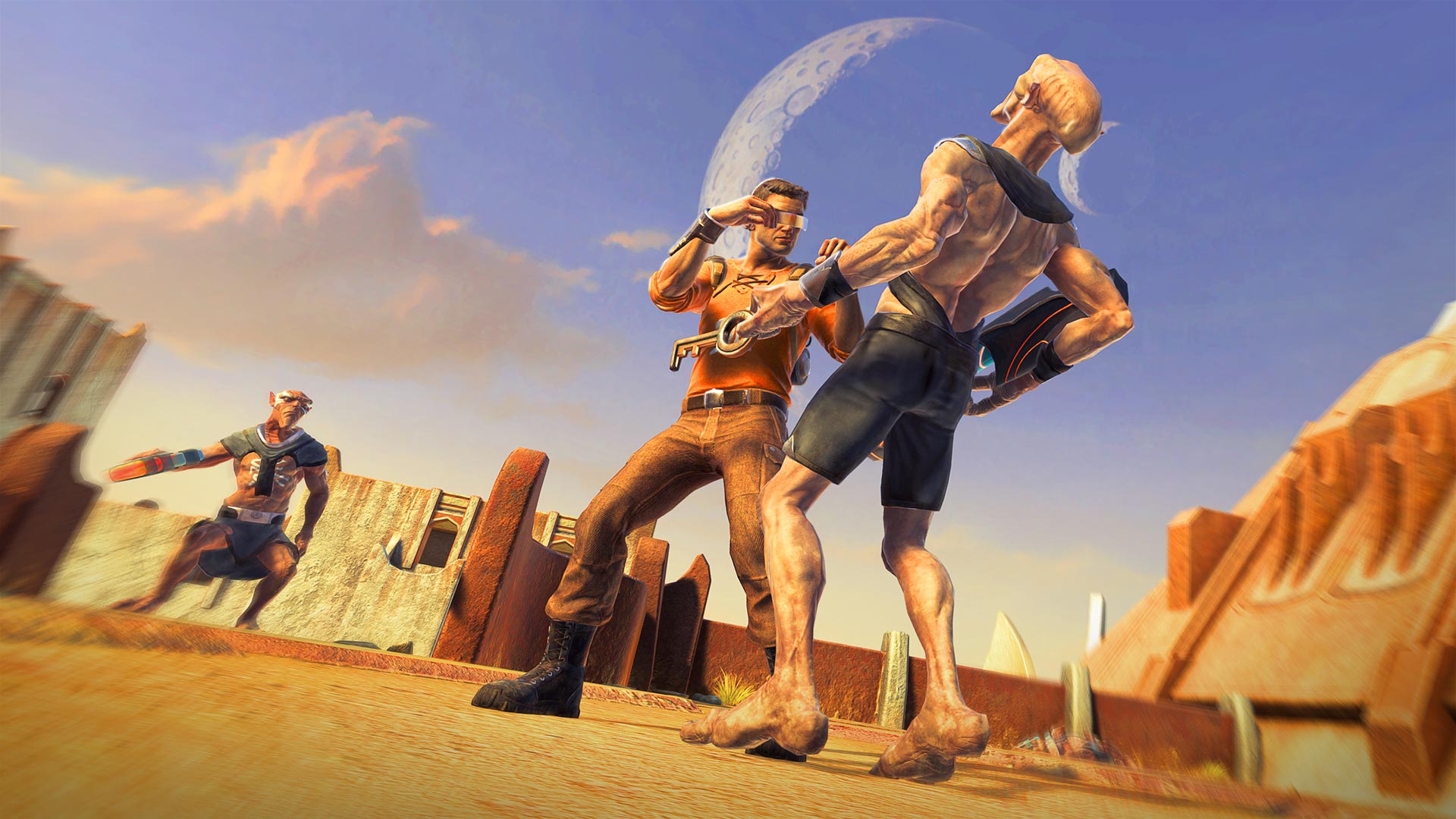 The voice acting in Outcast Second Contact has been taken directly from the original game and retains all of its 90’s charm.  We would have liked to have had the audio polished up a bit but, as it is,  it does a great job in immersing you in what turns out to be an emotionally engaging plot.  Somewhere along the line you will find yourself caring about the Talons and their plight and that has to be a great thing for any RPG offering.

If we had any niggles with Outcast Second Contact it has to be in the lack of detail in character animation;  the fact that lips didn’t move in sync with what was being said on screen and our protagonist Cutter Slade moved slightly better than early versions of Lara Croft.

The mechanics behind Outcast Second Contact, in particular the somewhat inelegant combat style,   may seem somewhat dated by comparison with today’s triple A offerings,  but the game retains both the heart and soul of the original classic.  Rather than a complete make-over, Outcast Second Contact is a worthy re-introduction, or renovation if you like, of one of the definitive games of the nineties.    Definitely worth a place on your game shelf.