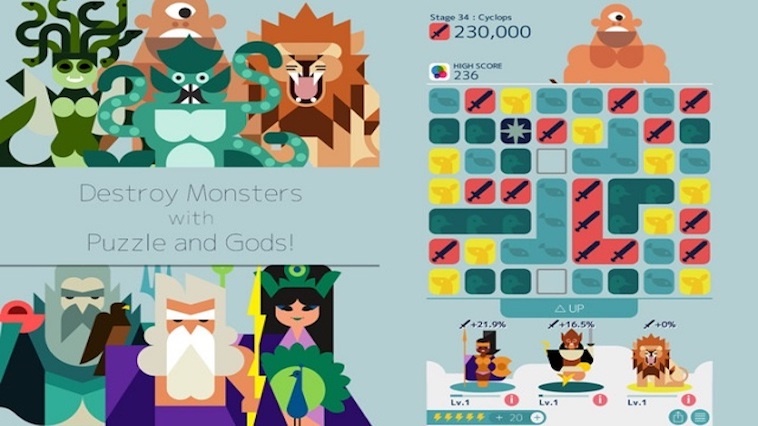 You ever meet someone who peaked in high school? I don’t mean the meek and embarrassed members of society who never moved out of their own hometown and still work at the same store they did when they were 18; those people don’t need to be embarrassed unless they want more. I mean the person who swaggers into a party or gathering like they come equipped with a crown, but the highest degree of royalty they possess is “homecoming.” These people may have been big fish years and miles ago, but, here and now, they’re almost embarrassing with how much they tout themselves. If they toned it down a bit, then, sure, there’s always room for one more, but how do you cope with a pawn who wants to move like a queen? This awkward metaphor is the unfortunate stage-setter for MUJO.

What makes things a bit painful is that MUJO, inherently, isn’t a bad game. Much like Levels+, my personal darling on the Switch, MUJO uses a fantasy/mythological setting to set up an interesting match-style game. You move through stages of colorful tiles, either creating sets of three to get a minimal experience increase or deal minimal damage. By long-pressing instead of short, you combine all the tiles into one super-charged cell, and matching that cell with two or more creates a significantly more dramatic effect. It’s fairly simple to pick up, and working out the technique and finesse of combining tiles, refreshing your screen and deciding when to activate your built numbers or holding out a bit longer. 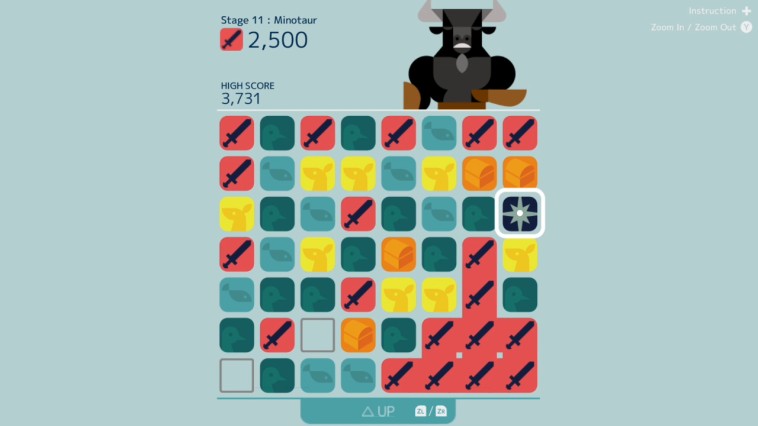 MUJO starts to ramp up almost immediately, however, and not necessarily in an interesting way. After the first four stages or so, the target number spikes to something astronomical, asking for 300 damage as opposed to 30. Before you even hit stage ten, the goals begin entering four digits, which is insane when a simple combination only nets about 3-5 points, at least initially. You can eventually level up your hero and her assistants, but the exp needed takes a while and the damage increase for a base attack isn’t substantial. Then there’s the matter of not being able to always get strong builds anyways due to the fact that, well, tiles interfere with clean combinations, and that’s more than acceptable in a game that’s meant to be challenging. The game knows the caveat of the tile blockage makes for a harder time, so the presence of “lightning strikes” exist to knock out offending items and make for easier setups. However, the number of strikes you can do is limited, and I should have been extra nervous when I saw that I got a “daily bonus” of strikes when I started up the game. Sure enough, once you’ve hit the wall and don’t have enough strikes left, the game graciously lets you connect to the eShop to buy more. Oh boy, micro transactions. There definitely hasn’t been a huge pushback against those in recent days.

Then there’s the fact that MUJO has crates that randomly appear, again, bad timing. The crates do lend gear and add to the effect of your heroes, but the implication of their importance and randomness isn’t wonderful. They tend to be scattered across the screen, making a three combo difficult, and basically inviting you to “open” them with your lightning strikes. You don’t have to. Then again, in the same kind of thinking, you don’t need to play the game, either. I’m about to turn a bit of a corner here, so bear with me. 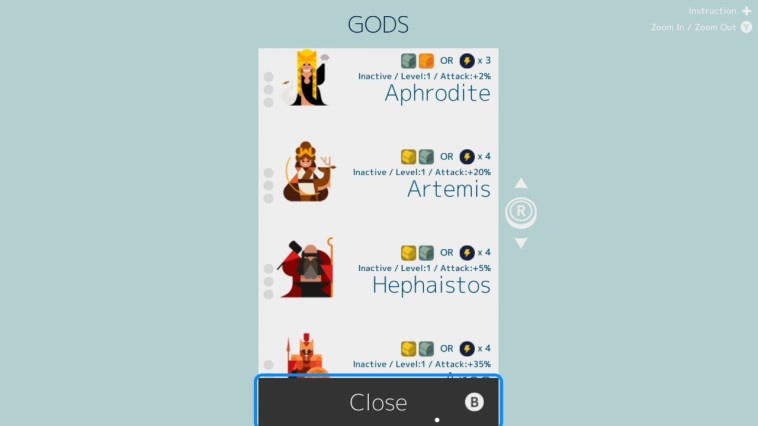 As a reviewer, it’s important to remain objective and look at the game as it performs, not at the price tag vs other platforms or how the experience stacks up to certain ideas of expectation. You look at the game overall, and judge it as a standalone merit. However, it’s very hard when a game that is 100% free on smartphones, both Android and iOS, is sold for any actual price and holds no actual benefits other than “it’s on the Switch.” There’s been a lot of presumption and arrogance for Switch owners in regards to ports, like they are owed something extra for buying an older game on their new systems. But when a game is normally free, putting any price on it is difficult to justify, porting costs aside. And then when the game functions almost exactly like the mobile version, people may get…angry. I personally am annoyed because it doesn’t feel like a great situation to be in, but there you go. It won’t affect the overall score that I give the game, but it’s important that players are made aware of the shortcomings since I doubt the developers will be sending them codes anytime soon.

In general, MUJO is simply ok. There’s a cute, jaunty soundtrack backing it, and the presentation of gameplay through a sort of mythological lens makes for an interesting setup. When the levels click and you can fire off multiple abilities from assistants, it flows and works in a decent way. When you hit the wall, though, and have to just grind and grind time, it really feels empty and pointless. It’s a drawback of smartphone games: the object is to occupy your time for as long as possible, so achieving the “ending” is something that’s far, far at the back of anyone’s minds. But since the stages are divided, it doesn’t even have the luxury of being a perceptively “endless” game, just a constant build and split that sometimes nets some extra exp and gear, but mostly just sucks your time. A majority of players will find better ways to spend their minutes and hours, and hopefully the developers will realize that they need to inject just a bit of glitter into their ports if they want to truly stand out.