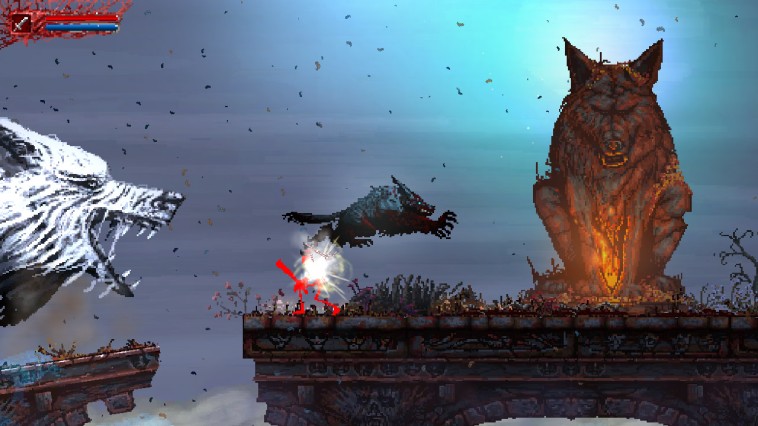 Heavy metal and video games go together like classical music and the club scene. They’re two totally different ideas and cultures that, by logic, should not co-exist, but, with a little help and ingenuity, they make a surprisingly good pair. It wasn’t that long ago that SEUM made everyone see the glory of thrashing about to Satan while also doing some pretty gnarly speedrunning, and Revolution X was golden age proof that rock and gaming belong together. And no, Aerosmith isn’t heavy metal, please don’t send angry emails reminding me as such. But having killer licks and dope drumbeats have given foundation to some of the more interesting games on the market, and Slain: Back From Hell is no exception.

Slain: Back From Hell is the story of Bathoryn, a long-dead hero who just wants to sleep but demons keep invading and messing up his eternal slumber. Roused and cranky by spirits who want the world to be cleansed, Bathoryn sets out to destroy demons, skeletons and many, many other creatures on his journey to defeat Vroll, an archdemon who seems to know Bathoryn in some regard. But it’s cool: Bathoryn has his kickass sword, he can throw magical fireballs, and he eventually unlocks other elemental weapons that seriously only need to be used on certain bosses and situations, but mostly the standard sword is all he needs. Oh, and some wet wipes, because there’s a ridiculous amount of blood here.

Slain clearly has a lot of influence and investment in some of the classic gothic titles, specifically Castlevania, and the way the game progresses shows as such. As a sidescrolling game, Bathoryn often has to work his way around a room laden with switches and buttons that need to unlock platforms and gates in order to move on. Along the way, there’s a bunch of flying, running and walking enemies, all intent on murdering you in some pretty interesting ways, such as liquefying you, decapitating you and stripping all the flesh from your bone. I appreciate the efforts of the developer to make the deaths at least a bit more interesting, because, spoiler, you’ll probably die a LOT in this game. There’s not a difficulty slider, and the game is inherently set at “metal” in an effort to capture the mentality of both the story, the gameplay and the soundtrack. 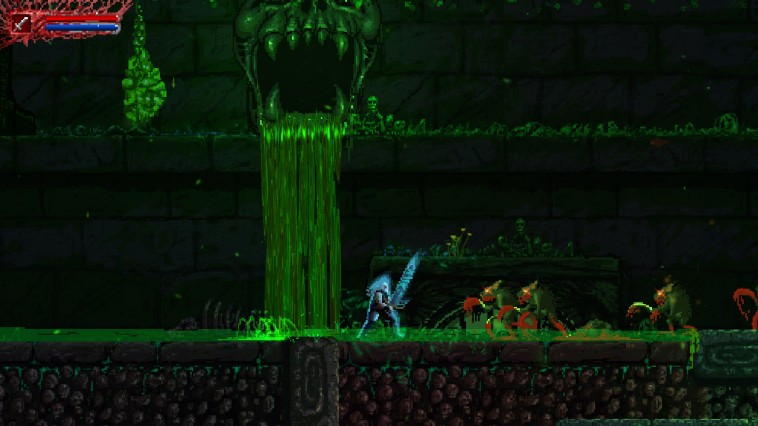 Let’s start with the music, because that’s the crux of this entire experience. Curt Victor Bryant, former 2nd wave bassist for Celtic Frost, took the lead on this one, and I must say it’s a pretty solid and satisfying experience. The entire game plays out in a vein of heavy metal that doesn’t go doom or black, despite the accompanying visuals, but it does deliver a lot of speed, heavy sounds and overall driving technique in terms of background music. This is one of those vehicles where the game understands where they need to pull their punches in musical terms to appeal to a wider audience, and I think they could have gone heavier if they really wanted to pander to metal heads. Even the name of our character, Bathoryn, is evocative of Bathory, which will immediately give enthusiasts the wrong idea. If you like metal in a borderline casual sense, then the music of Slain will be a great ride for you. If you’re pretty aware of works by Mayhem, Burzum or even Melechesh, you will straight up hate how tame the music sounds. Still, in terms of game soundtracks, it’s one of the better ones.

Visually, Slain: Back From Hell rides the line between being true to its own message and getting just absolutely muddled in display. We get it, the game is dark and menacing and full of blood and gore, but you need juxtaposition to keep the game from becoming one-noted. With an overabundance of reds, browns and blacks, our hero’s white hair can sometimes be the only beacon to indicate where you are on increasingly complex levels, and this goes right out the window when you hit the ice territory. I didn’t hate how the game looked, I just felt that there was almost an inherent safety pulled off by making it so over-the-top to the point of it feeling bland. Though I do applaud the use of blood with a geysering effect and still keeping it from being nauseating. The pixel art approach is the best way to do games that are inherently “gorey” (see also Butcher), and the executions of the bosses after defeating them in battle gave credence to the hardcore attempt of the game. But again, since the game is kind of pulling its punches in terms of full commitment to the “metal” aspect, having Bathoryn headbang at the end of each level was…weird. It was weird, and I never really felt like I earned the headbanging.

The gameplay itself is the final note to touch upon, and that can be broken up into two different categories: running and killing. You see, there’s not really any progression for Bathoryn in the game: he starts out as strong as you’d like and only really changes in terms of some elemental weapons that he obtains along the way. So killing monsters serves three purposes. Firstly, getting them out of the way so you can go to the next room. Secondly, getting them out of the way so you can reach a switch. Lastly, getting them out of the way so I can go to the next level. As odd as it sounds, I wasn’t really compelled to fight any of the mobs if I didn’t absolutely have to. In fact, it was almost more fun to try and jump, dodge and get past the hordes without needing to swing my sword, which feels like the antithesis of the entire game. And when I was left in positions where fighting was a must, you had to consciously hold off on the kneejerk reaction to just swing your weapon as fast as possible. Nine times out of ten, waiting and then either blocking and then attacking (dealing a super lethal strike) or deflecting a shot object (most of the wizards and gargoyles were guilty of this) was the best way to approach anything. You can go for rooms and rooms without suffering any damage as long as you can pace out enemies and be patient. Even when beset by four things at once, as long as they’re on the same side of you it’s simple to wait, block and do a critical strike that’ll level all of them at the same time. 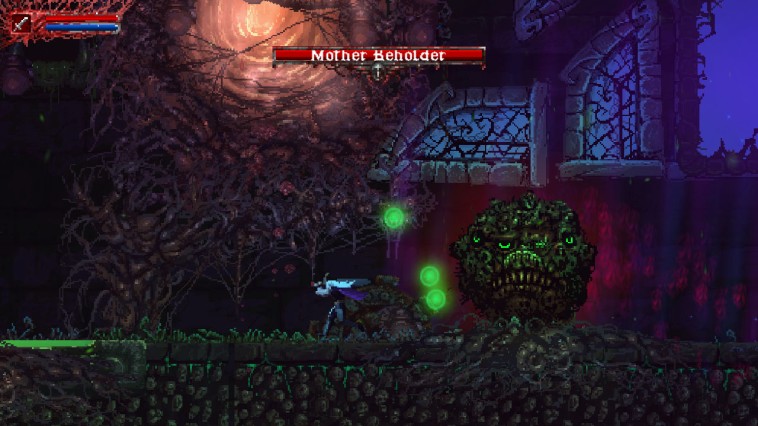 And it’s a good thing that I figured this out, because the regeneration points are a bit few and far between. Slain: Back From Hell doesn’t disguise the fact that it likes death and punishment, but the infliction on the player can sometimes be a bit unfair. Healing items are either too spread out or too clumped together, making them essentially useless. Critical strikes will regenerate some mana but not health, and firing bolts from afar only seems like a good plan if you have a clean shot and can safely have a second to recover and jump afterwards. There’s nothing worse than working your way to the top of a tall room, missing a jump because Bathoryn isn’t exactly a gymnast, and then falling all the way to the bottom, landing in blood lava and needing to trigger all the damn switches and dodge all the damn skeletons AGAIN. There isn’t anything metal about sucking out on a simple jump. I don’t expect the game to magically get easier for me, but man it felt awful to redo the same stuff over and over.

All in all, Slain: Back From Hell is a pretty good platformer and a decent homage to the 16-bit pixel punishment that gamers of the 90s had to endure. Though it’s nowhere near as difficult as Volgarr, it also doesn’t have the same kind of charm due to the graphics being murkier. For people who passively enjoy metal and love a good bloodbath, then Slain is going to look pretty dope on the Nintendo Switch. However, for the enthusiasts who are truly looking to thrash, you may need to take a step back and lower your expectations before embarking on Bathoryn’s quest.