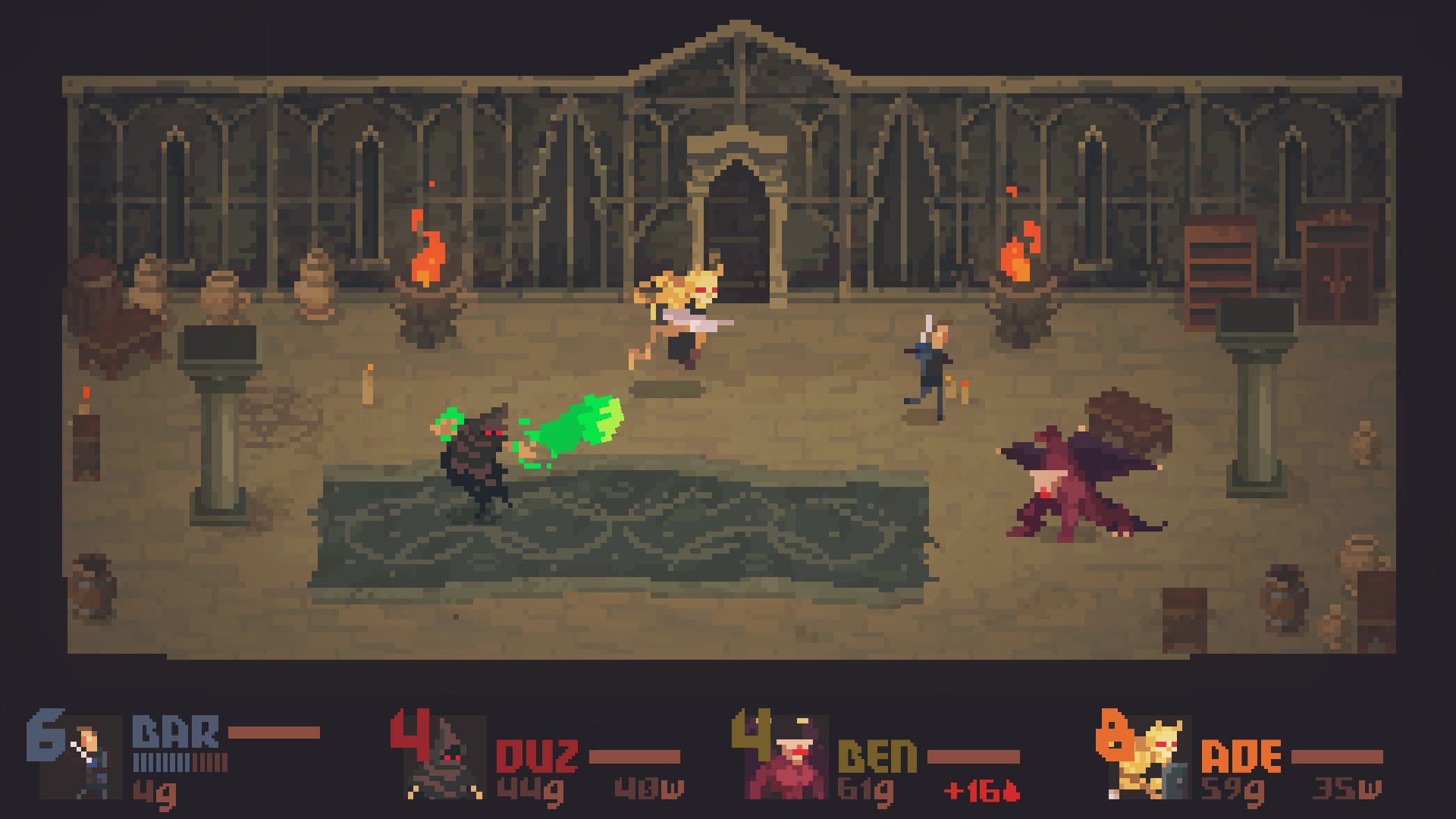 They have often said that you have nothing to fear but fear itself. The very concept of being afraid is what renders great men and women powerless, and there is nothing scarier in this world than what your mind manifests during anxiety. That is, unless, you’re afraid that your friends will be your very undoing in their own quest for glory and power. Then, in the world of Crawl, your fears are very much real and your friends are all jerks.

Crawl is a fantastic take on the classic dungeon adventure with a massive twist. You are a hero, trying to escape a dungeon of some fantastic and horrible design, and are fraught on all side with traps, monsters and even slightly damaging furniture that could hit you in the head. Along the way, much like Jacob Marley, you’re visited by three spirits, but these spirits follow you everywhere and actively are trying to kill you. Not to punish you or show you the error in your ways, mind you. No, these spirits know that slaying a mortal human is the fastest way for them to be reborn in the flesh, and so your demise may mean their salvation. But worry not: dying at the hands of these apparitions doesn’t end the game, but merely reverses roles. Now you, too, are doomed to haunt this dank, cavernous place, waiting for a chance to deal the killing blow yourself and regain your life. 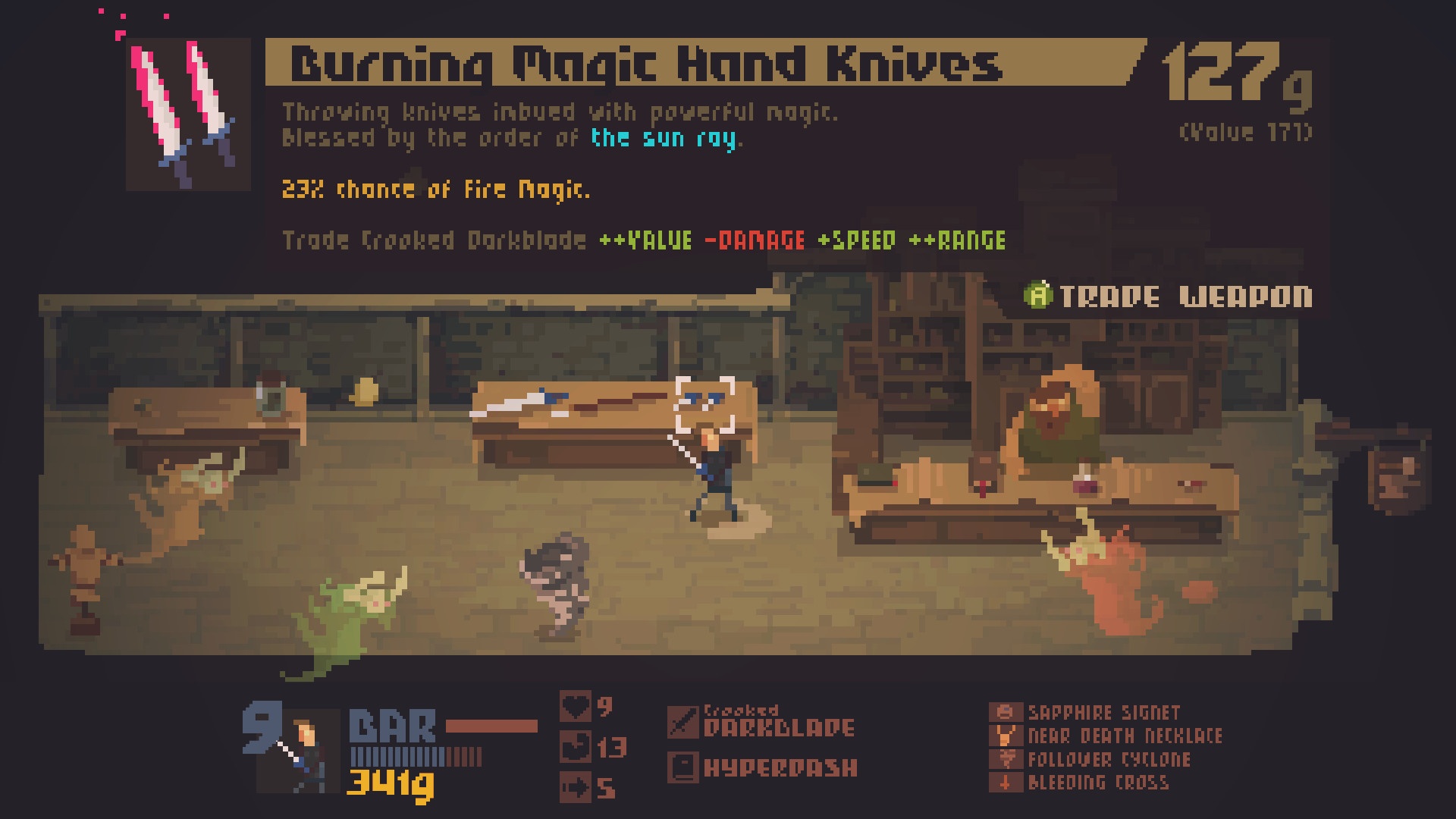 Dark and crazy premise aside, Crawl plays out exactly how I described above with incredible mechanics and strategy. At first, the spirits can only take possession of bowls and chairs, possibly the errant crossbow launcher, but soon you encounter pentagrams that summon randomized monsters that the spirits possess. Since this is meant to be a multiplayer game, player one will always start out as the hero, but this can quickly and easily be changed through a little cooperation with your fellow ghosts. Heroes gain EXP and gold from slaying the monsters summoned, and the spirits gain Wrath from watching their familiars get slain. A hero can then use gold to purchase different weapons and accessories from the hidden shops in order to stay alive longer, but it can all go up in a puff of smoke if the spirits get the drop on you. The Wrath that’s obtained is used between dungeon floors to power up the monsters in different ways: add flames to the skeletal archer to make the arrows more powerful, or combine wolf and rat to make something truly annoying and terrifying.

Crawl, to me, plays out a lot like a good round of Mario Kart. When you’re in the lead (i.e. the hero) you have to maintain that lead as best you can with limited resources. After all, you can change up your weapon and maybe get some additional skills, but, mostly, you’re still a bag of meat that can’t easily recharge. The spirits, on the other hand, and coordinate some amazing attacks by figuring out who’s the flamethrower, who’s the monster to draw fire and who’s the guy who thinks throwing a pot at the hero is the best way to win. Dying as a monster doesn’t do a damn thing to your stats, and building up enough Wrath enables you to create monsters that are devastating against the hero. Not to mention the little clouds of “summon” powder that spirits pick up, eventually letting them summon a couple of slimes on the fly to annoy and distract the hero. Every single partnership is one that’s completely paper thin, however: no one is going to be supporting another person to be the final champion, since it’s literally one winner and three losers.

As you may have already guessed, this is definitely a game that plays best when you have other players around. Crawl doesn’t do much in terms of AI: the CPU characters are competent but pretty much running the same formula each and every crawl. Buy what they need when they’re human, upgrade one monster at a time when they’re ghosts, and work out a predictable pattern for when you reach the boss at the end of the Crawl. It’s certainly not a bad thing: they do what they need to and they make it challenging for new players. But veterans are going to find the most enjoyment and success from other players being beside them. I think there’s some inherent criticism for any game that focuses on couch co-op versus online, but online simply doesn’t work in this case. Crawl brings out the best and worst in people, and that’s something that needs to be witnessed, not just experienced secondhand through a screen. Not to mention the very aesthetic of crawl emulates that of an oldschool arcade game. Even if the developers weren’t going for a fully retro feeling, the pixel art and blocky blood really throws you into a era before online, and keeping that localized helps preserve that entire mentality. 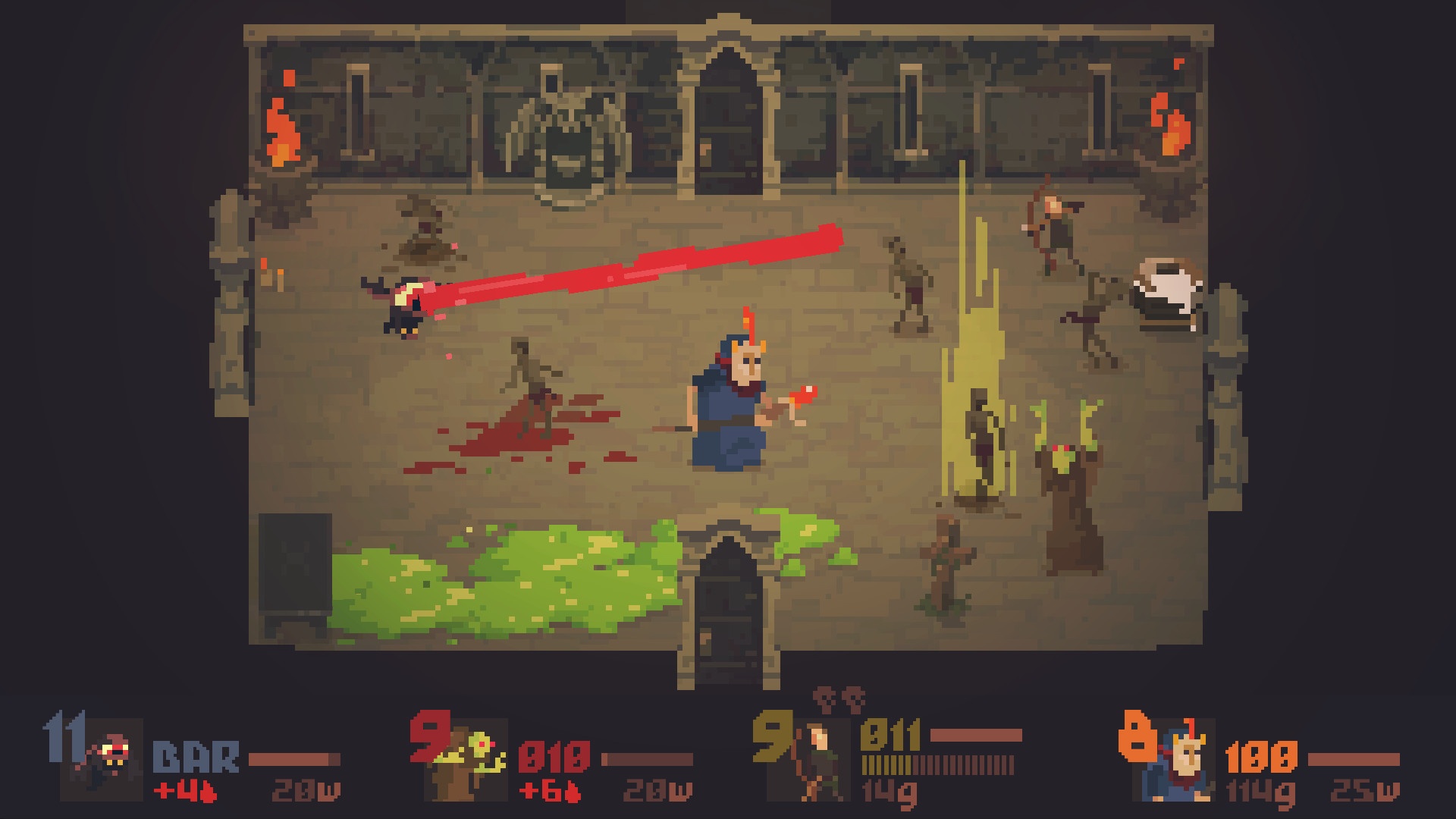 However, as a result, Crawl is going to have limited appeal to players who prefer to do their gaming alone. Sure, there are variables that come up in every game (monster types, the occasional secret boss, whatever’s in stock at the store) but the goal is identical: get to level ten and get the hell out. Without someone else there to enjoy the mayhem with, you end up with a relatively same-same situation every time, until you’re finally just sort of bored with it. Which is a shame, but, at the same time, keeps the game true to what it is. Without the focus on the multiplayer and the fun and confusion it generates, Crawl could easily be forgotten or simply written off as another wannabe dungeon crawler. Instead, you get something that’s entirely unique: a more aggressive, harder flavor of Dungeon Keeper. And if the contingency on that is to need other players, then so be it.

And what better system to demand that you have more players than the Switch? Since the screen doesn’t need to be divided in order to work as a multiplayer situation, Crawl is a wonderful addition to the indie library, and one that gamers are going to want to grab soon and fast. Without running in circles too much, this is a great centerpiece to point at and say “This is a game that was great on the PC, but it’s even better on this portable console.” Grab some swords, gain some Wrath and have a couple friends on deck: it’s time to Crawl.