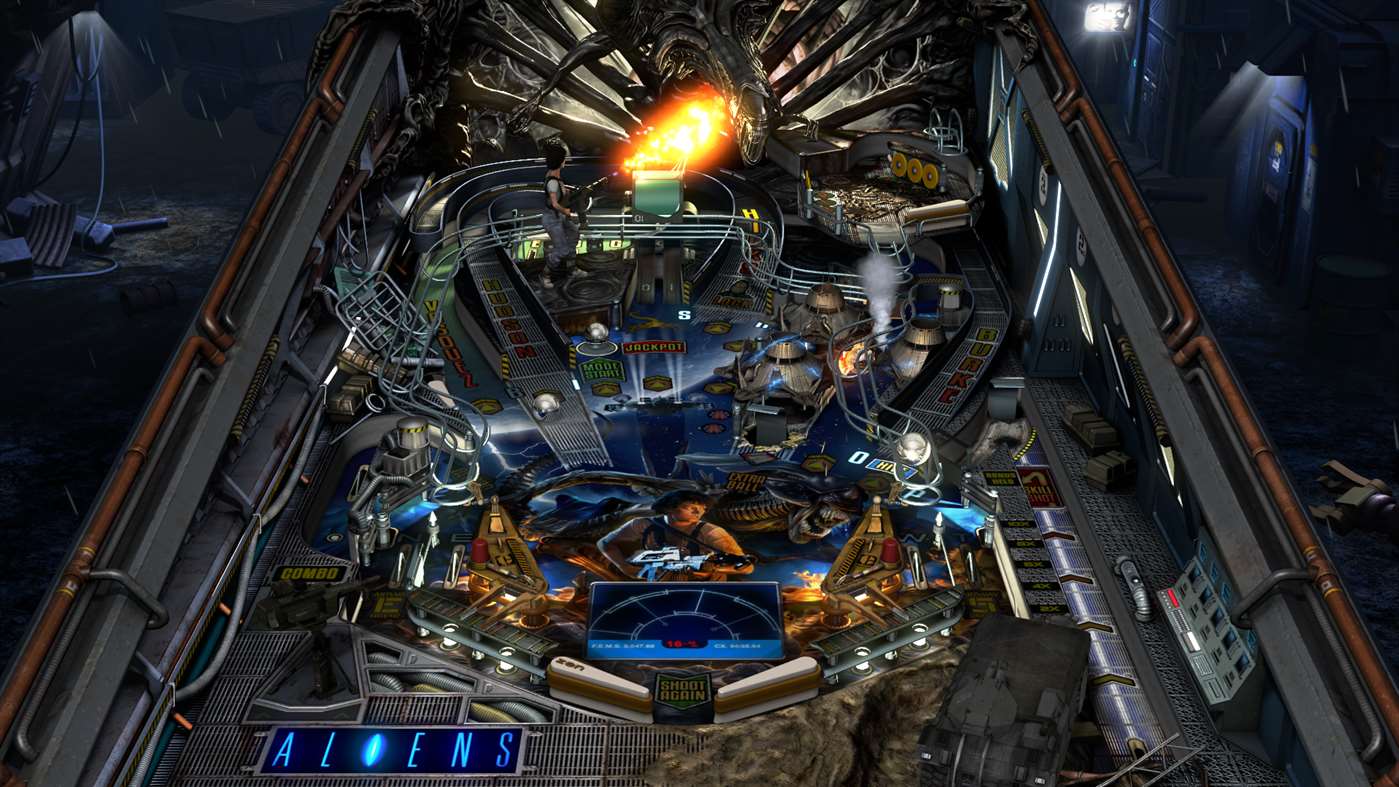 As we continue to look at the number of tables that Zen Pinball FX3 has to offer on the DLC side, it’s important that we do take a moment to admire the level of detail that has gone into each and every one of these beautiful designs. Sure, you may not be able to logistically see something like this in real life, but there’s a huge amount of craft that’s gone into making the tables work even better on a digital landscape than they would in real, tangible life. Keep in mind that pinball tables go for thousands of dollars, with many of the models that we just saw in the Stern Pinball sets selling for 5-6k a piece from secondhand collectors. So to have models and ideas that not only work as great games but function as fantastic displays is truly something to behold. And these ideas of beauty only help to project the full horror (in a good way) of the Aliens triple pack.

Notice how I didn’t say Aliens trilogy, which, for many people, is as many of the movies as they’re willing to recognize. This DLC kit contains three tables that encapsulate the Aliens universe in a big way (and leave Prometheus at the door, thankfully). The first table, simply titled Aliens, is a nod to the first two movies and focuses most heavily on “story” as far as the pinball table goes. Sigourney Weaver as Ripley stands tall and proud, looking as she did in these classic horror films, while the mother Alien itself slithers and sways at the head of the table. The entirety of the board is designed to look like the USS Sulaco, with the ramps and targets resembling corridors and vents that need to be navigated to safety. Each of the unlocked missions takes something from the movies themselves, be it trying to escape from the xenomorph by following lit pathways or nailing different targets to keep the enemy at bay. This is going to be the table that attracts the most number of people, as it’s a fantastic composite of a movie homage and a decent game experience overall. 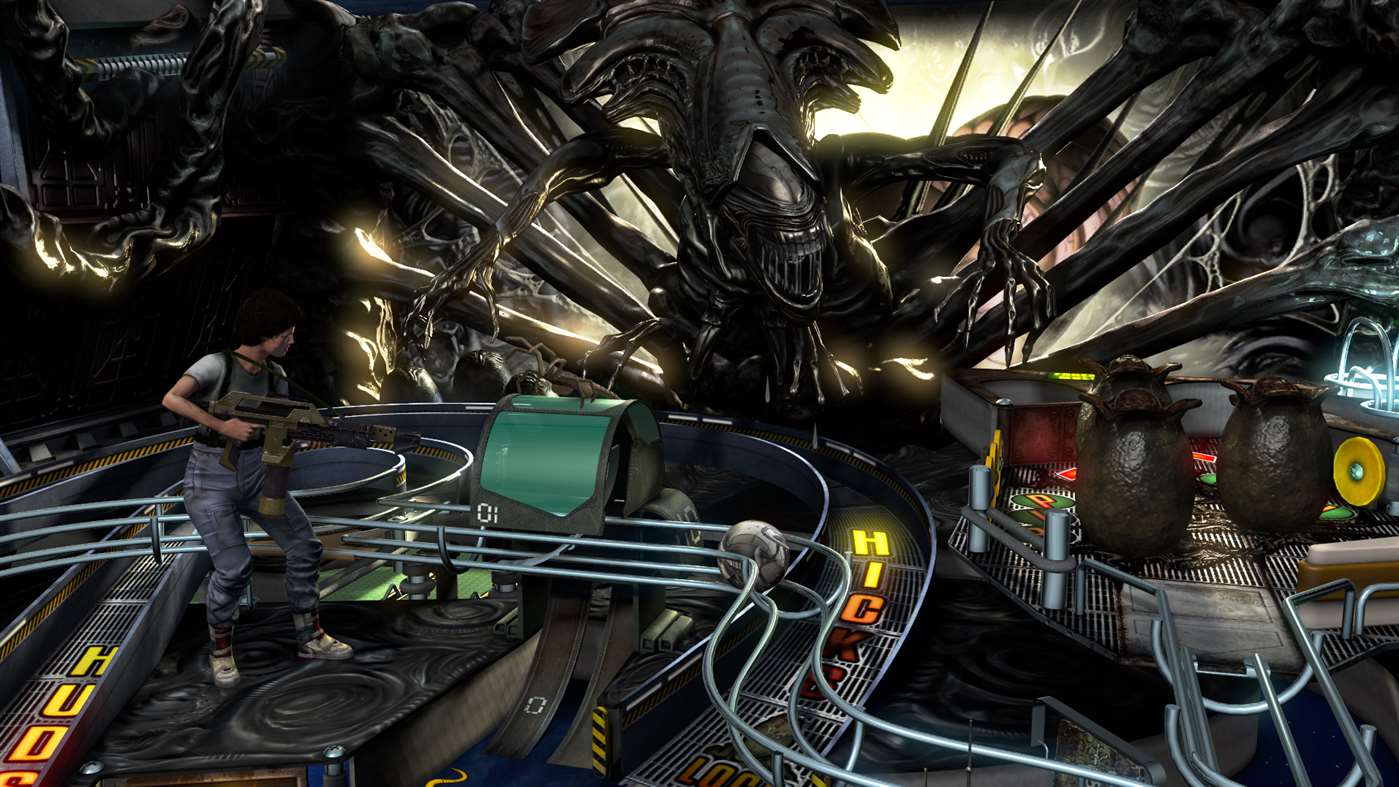 The only shortcoming that you may find with the Aliens movie table is that it claims to support different storylines from the films, but everything just feels mishmashed together in an effort to keep the game itself cohesive. I think, ideally, it would have been nice for Zen to create two separate tables to better give the duality of the movies (Alien and Aliens are very, very different beasts) but I understand the need to cut down on overhead and not create two items that could be, fundamentally, similar, and thus make it seem like there’s just repetition for the sake of fluffing the table count. No worries, let’s move on.

Our second table, Aliens Vs. Predator, has nothing to do with the movies, and I think we can all thank our individual deities for that one. Focusing more upon the highly acclaimed game series, the imposing visages of both a Xenomorph and the Predator himself loom on either side of the boards, with the ancient temple of Predator’s trophies sitting like a monolith in the background. The animations here are especially fantastic, as you will see. The Predator take potshots at the Alien throughout the gameplay, while the Alien hisses and tries to strike from a distance. The different missions that get unlocked focus on the POV of each of the three factions (Alien, Predator and Human), although I would argue the missions for Predator are some of the most fun. While the Human missions tend to be “get the hell out of here before we get eaten,” the Predator is constantly on the hunt, the true Apex of the gameplay, and you even get to shift into the infrared vision mode to try and stalk targets, both human and Xenomorph. Given that Xenomorphs don’t show up on this heat vision, you get an exceptionally higher payout for nailing Aliens than the glowing, delicious humans. This is the table that delivers the ideas and mentality of the basis concept the best, and should be enjoyed in heaping quantities. When the game over appears and the commander’s voice vaguely mutters about everyone being doomed, that should be your cue to drop another credit in and get ready for the fight of your life. 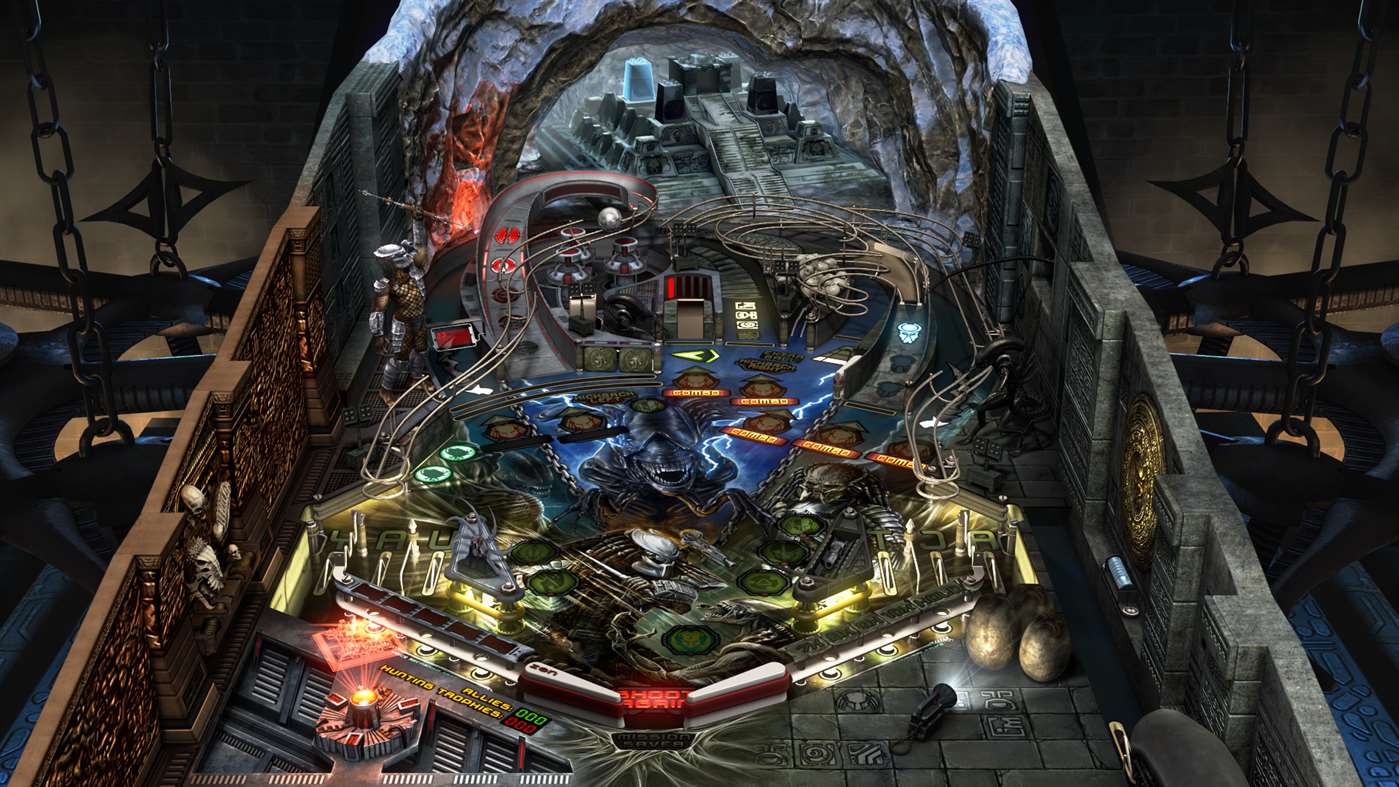 The final table takes place in the more recent gaming world, Alien: Isolation. To the untrained eye, this board will feel like a sparser version of the Aliens table, and the detail and effect will be lost to players who haven’t had an opportunity to enjoy Alien: Isolation (which everyone should try to play at least once, it’s fantastic). Ripley returns as an active sprite again, but the world and effect are totally different. Here, the Xenomorph is HIGHLY active on the board, and this is the only time I’ve ever been scared by pinball. When certain targets are triggered or missions begin, the Xenomorph will move, chasing Ripley down and even leaping the length of the board to try and attack her. Of course, this is a game of pinball: you won’t die instantly if the Alien reaches her. Still, it brings back the looming fear and creeping suspense that the horror title inspired, and that’s monumental to have in a pinball game. Again, the board here is much more spread out and empty, with ramps and bumpers existing primarily in the corners. The dead space in the center really helps to build the anxiety of the entire play, as you always feel eager and desperate to put your ball somewhere so you don’t feel so exposed. Once the play is over, there’s almost a sigh of relief that you don’t need to keep going.

This set of tables is not for everyone. The fact remains that Zen has crafted a wonderful triple pack that will appeal heavily to the horror and sci-fi crowd and, of course, to the pinball enthusiasts. Unlike the Universal Classics pack, however, there isn’t “something for everyone,” and not everyone’s childhood was scarred by the sleek black maw of death that burst out of the screen and into your subconscious. I will say this once, and take heed: if you don’t like horror movies, do not get this pack. It’s that simple. But if you’re curious and you think you might be ok to play with the lights off, go right ahead, but don’t say I didn’t warn you.