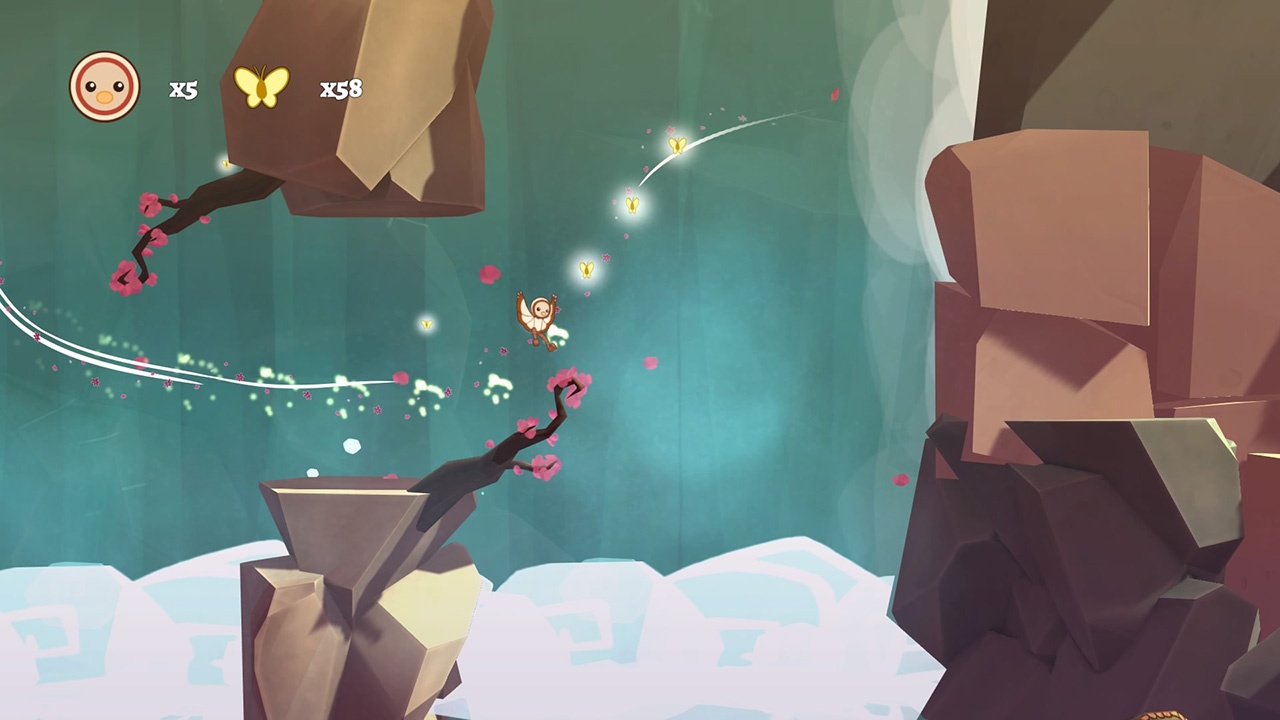 Ever read up on the story of the inception of Dennis the Menace? It’s totally wild how two different people, who had never met, launched two different comics with completely different tones and protagonists on the same day and called both Dennis the Menace. It’s the world of coincidence, and, believe it or not, it exists in many forms. When it happens in gaming, many critics (ok, critical players) are quick to pass judgment and call one developer or another a hack who steals ideas, even though, believe it or not, running around and grabbing power ups is a great foil for many games, not just ones with plumbers. So when multiple games came out in approximately the same time about flying main characters who resembled birds, people decided to choose sides even though no one asked them to. Many stood proudly by Owlboy, which had a long, long history of development, as the true blue original, and, in turn, shunned a little indie game by the name of Shu. Which is a damn shame, because this game is fantastic.

Shu tells the tale of a birdish boy who, once upon a time, lived in a great little village near the seashore and just had a life that was simple yet happy. That’s really all we want, right? To be happy? I mean, reasonable people, for the most part. Well, Shu, and his other, birdlike companions, were all pretty damn happy. Except for grandpa, who sort of knew a monster that was shaped like a storm was coming to destroy everything and slowly devour the world, and decided to tell Shu about this mere seconds before it happened. Shu, being a young lad and not really having any other recourse, decides to run like crazy and advises the other villagers to do the same. We all then take it in turn to flee this sinking village after grandpa gets murdered by the cloud monster and now the plan is just to run and figure things out later. I guess, along the way, we slowly uncover mysteries and ideas about how to stop Te Ka before we no longer have a planet to live on. I’m not sure if it’s quite that serious of an end goal, but you just lost your damn home, I’d take it seriously. 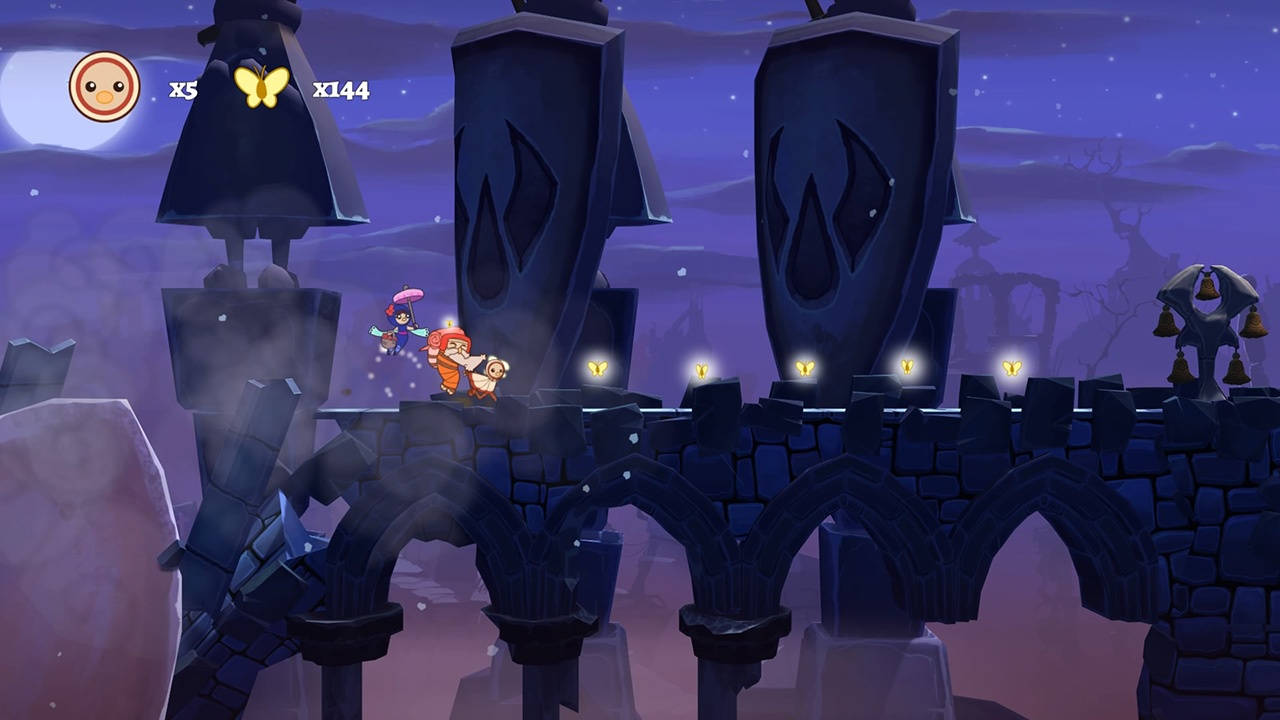 The first thing you’ll notice upon firing up Shu is that it’s a visual masterpiece right out the gate, and it should look fantastic: it’s all hand drawn. I don’t know where Coatsink got its talent from, but I completely and unapologetically adore how the characters and worlds of Shu look. Starting off on the wasted beaches and the cavernous cliffs and eventually moving deep underground and into a bizarre, beautiful futuristic lair, every second of this game is eye candy in a way that’s still somehow modest and controlled. With some games, they really get up in your face about how good looking or artistic they’re supposed to be: I’m not judging Monument Valley fans, I just think the game gets a bit full of itself sometimes. But Shu is humble from start to finish, allowing you to observe and drink in every sketch and stroke that made the world you see, but still keeping things in line so that you aren’t forced to stop and say “ALRIGHT, IT’S PRETTY, I GET IT.” Seriously, it’s damn pretty.

Shu is a sidescrolling adventure/platform deal that asks you to do a bit of exploration in order to make the most out of every stage. Shu, as a bird boy, can flap his wings to glide a bit and he can also ride some of those delightful thermal winds to get to some places, much like Tobias did once upon a time. Naturally, the main goal is to simply get to the end, but there’s a few things you’d ideally like to find in the process. There are butterflies everywhere, why not grab as many as you can? There are six colorful hatchlings that have been abandoned in the exodus, surely you don’t want to leave those behind! And there’s also this mystical tome that is incredibly rare and powerful and hidden in each level (but not too tucked away) and that probably has some answers as to what ya’ll should do next. Overall, this is a game that is going to give you the passage out, no matter what, but it does make you feel better and like you got a better ending if you’re able to find any and everything you need to complete a level. If you manage to grab every single hatchling, tome and butterfly in a single level, you do get a nice checkmark that lets you know you are DONE with that level, and there’s no sense in coming back. Very satisfying, that one.

Shu is far from alone in this quest, although the game can sometimes make you feel a bit lonely along the way. You see, there are other villagers who are still trying to find their way to sanctuary, but aren’t exactly sure of which way to go. Since they saw Shu last talking to grandpa Bird before he was eaten by Darkness, they figure that Shu knows the way, so they follow him without hesitation. And all of the villagers have different abilities, from smashing through barricades to providing safe passage through the wasteland by giving you a double jump. If Shu were able to collect all the villagers in a single go that he encounters throughout the game, he’d be a damn unstoppable beast boy, truly a wicked beast of a raptor. Instead, what keeps happening is, every so often, the villagers basically find a good point to get off, bid Shu farewell and then leave him to keep doing his own thing. There’s this particularly titchy part where someone in a hot air balloon appears and suddenly rescues three of the villagers who are with you…and then departs and leaves you there. The hell, man! If you know where to safely go, bring me with you, don’t just take my abilities! There are times when I wonder if it’s worth saving the others, because it’s clear they don’t give a damn about saving me. 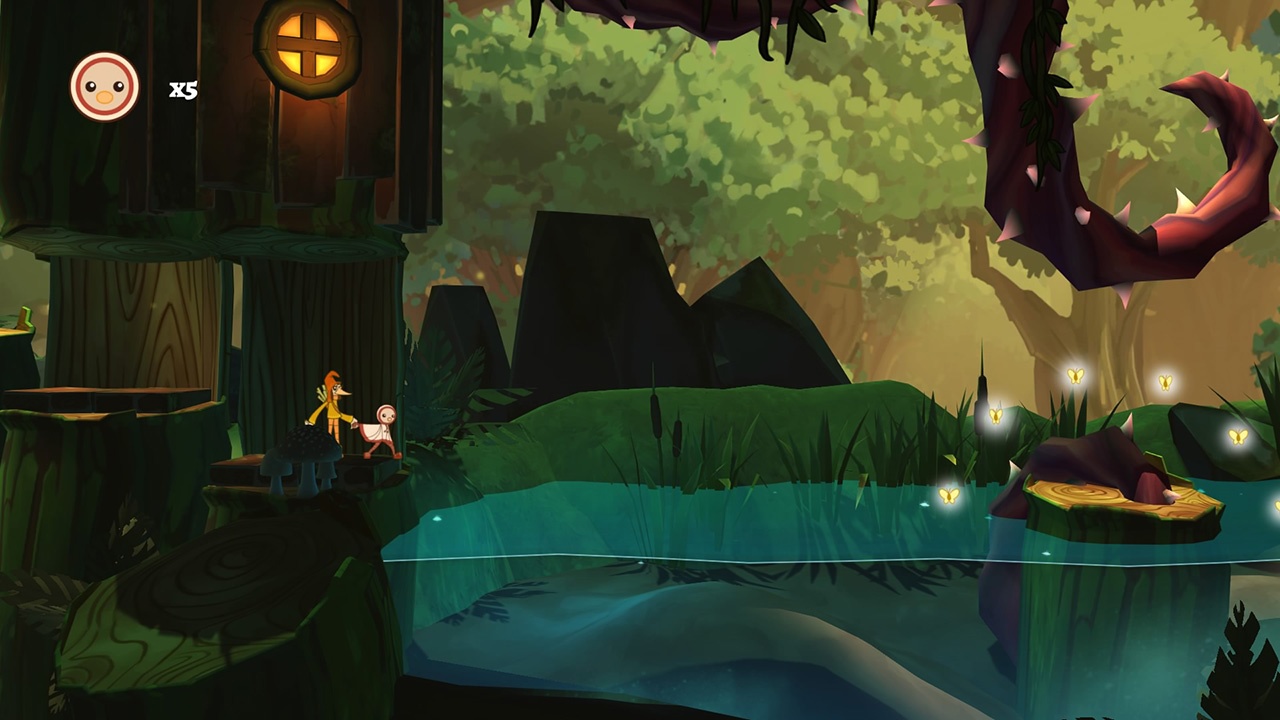 Also, Shu is surprisingly difficult. I don’t say that like I didn’t expect it to get hard, I say that because of the degree of difficulty that it levels at you. The game does gradually increase in platform distance, shorter periods of time to pull of great maneuvers and more unforgiving destruction, but the cap is way, way higher than I thought it would be. I got through the first five stages thinking this was going to be a pretty cakewalk and I would get all of the birdies and butterflies I could ever want. By the time I survived through a rather dismal crypt-like area, I was just thankful that I crossed the finish line at all. There are plenty of checkpoints, which also give you extra lives to try things, but Shu doesn’t have hit points. He has a single instance of dying and that’s about it, and you have a maximum of five times to die before you gotta restart the stage. There’s a lot of trickery afoot, and it’s well done and well deserved. You will definitely die several times, but that’s to make you learn the power of good level design and to let you know “Yes, I’m gorgeous, but that doesn’t mean I don’t have thorns.” It’s like a rose, but instead of thorns it carries bayonets. I loved it, it was awful.

Mix in the beautiful graphics and great gameplay with a stage-setting soundtrack, and you end up with a game that’s an absolute joy from start to finish. Sadly, the finish does come sooner than you’d like, and the ending never really gives you this spectacular boss fight that many people have come to associate with games like this. No, Shu makes it clear from the start that he’s a sprinter, not a fighter, and we shouldn’t hold that against him: it would have really been a weird tonal shift if he had to fight the cosmic horror of nothing right at the very end. Still, this is an experience that seems to have eluded many people’s scope, and I urge you, from the bottom of my heart, to give Shu a try. If the Switch is all about giving exposure to the games that deserve it and are truly indie treasures, then this is the title to add to your library. You sincerely won’t regret it, and I definitely won’t forget it.