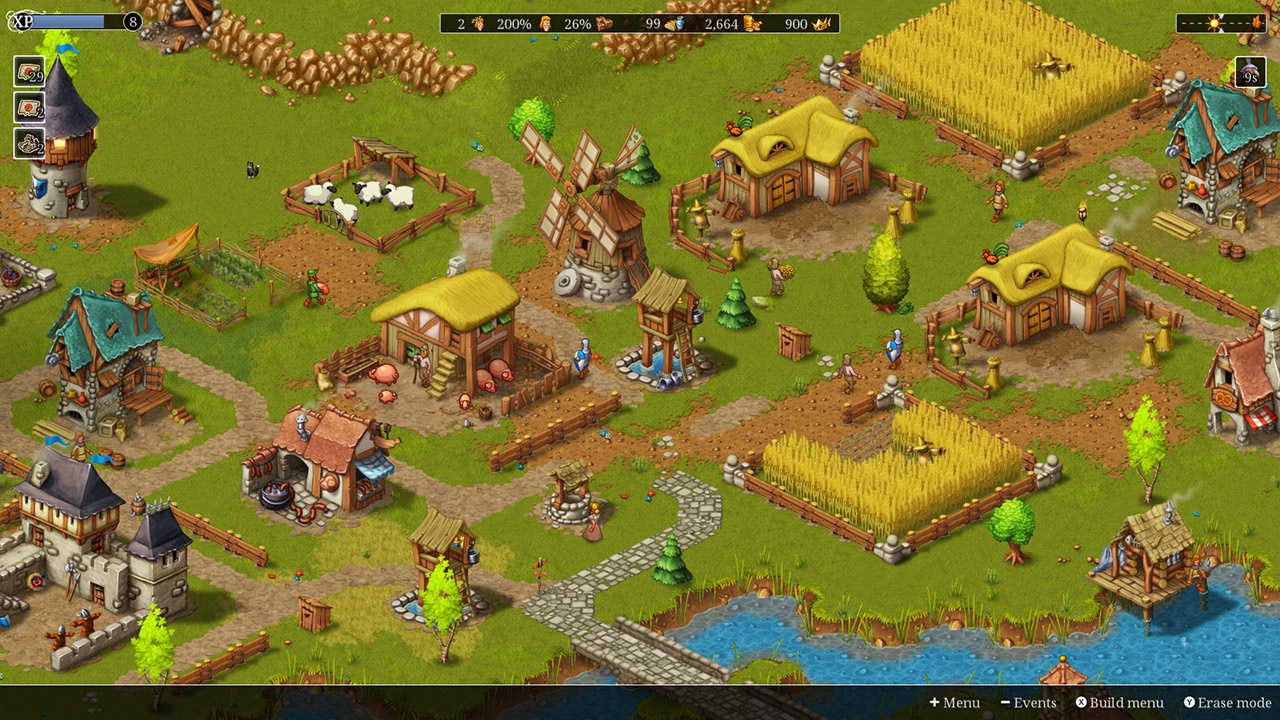 I like a game where I get to control everything. That’s why Townsmen is the perfect game for me. I get to build my own Medieval village and then turn that village into an Empire. It’s easier said than done but put enough time in and you will have the greatest Empire there is, my Empire is still being built as we speak… I’ll get there one day!

Townsmen is a strategy game in which you build your own city/village/empire set in Medieval times. Beginning as a tiny village and expanding into a glorious empire, you must manage your villagers happiness, harvest crops, mine ore and even collect taxes. With dozens of different buildings to construct and manage and a complex economy, this game is surprisingly in-depth. In my experience with this type of game in the past, it’s usually a case of just placing buildings and then they do the work for you. Not in this game. Each building has its own uses and you must assign workers in those buildings to get the resources you need. Not only that but every building eventually needs to be repaired and a little tip, be careful where you place your buildings, don’t place a coal burner next to some town houses. I learned that the hard way… and everything got burned down. Oops. It’s not all good though, you have to prepare for bandit raids. Without guard towers or barracks the bandits will take everything you own and destroy your buildings along the way. 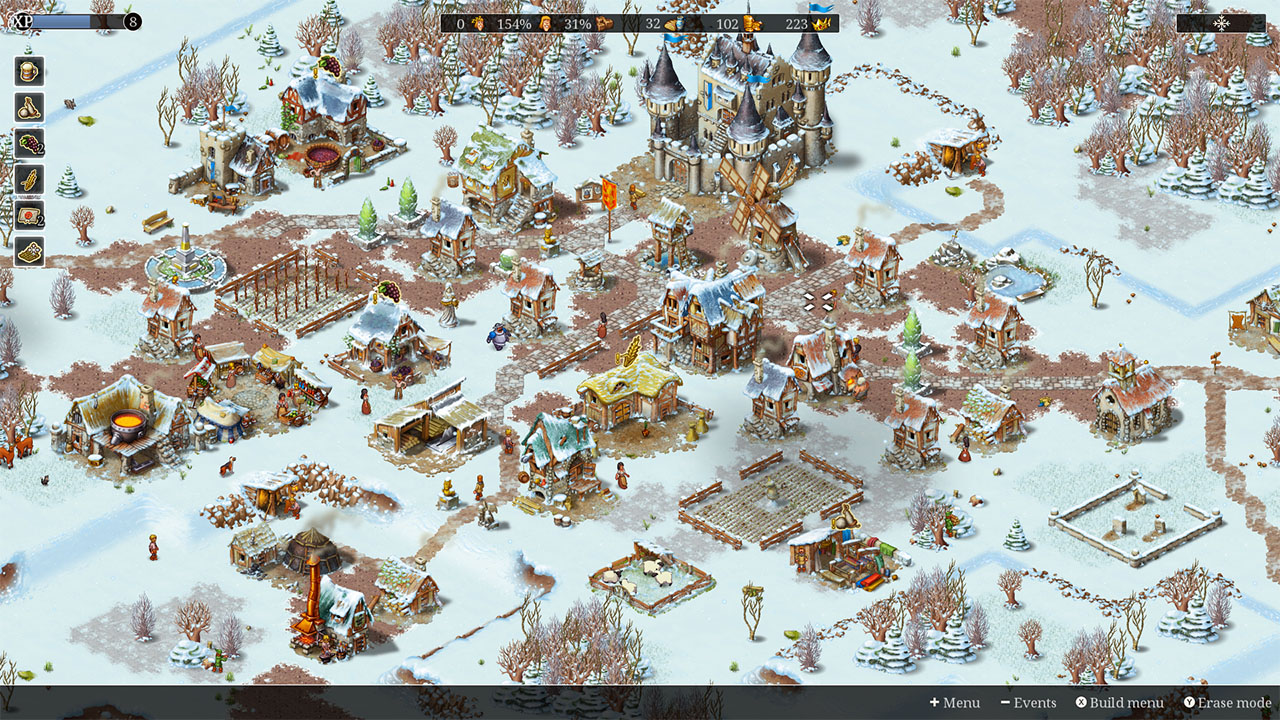 One of the main objectives in Townsmen is to keep your villagers happy. There are many ways to do this but it really is just a case of putting things in your city that villagers need or want. Build a tavern or place some decorations. Basically, listen to your villagers. Now and again you will be given quests. Whether you complete these quests or not is up to you, but it will usually be worth your while to complete them as you will usually earn some XP and some coin. Coin is very important in this game. You obviously require it to build anything or buy anything, which is equally important.

There are two different game modes to make use of in Townsmen. You have 26 scenario levels which you must accomplish various tasks in order to complete that specific scenario. Each scenario has a specific map size and difficulty, starting off which small, easy maps and increasing in size and difficulty along the way. The second mode is Sandbox. There are 24 sandbox maps for you to create your dream medieval village on. It’s also worth noting that there is a pretty extensive tutorial consisting of 6 ‘steps’. You don’t have to complete any of these levels before starting the game, but it is highly recommended. As I mentioned earlier, the game is very in-depth so the tutorial will help to understand this. It’s very long, but get through it. You will need it. 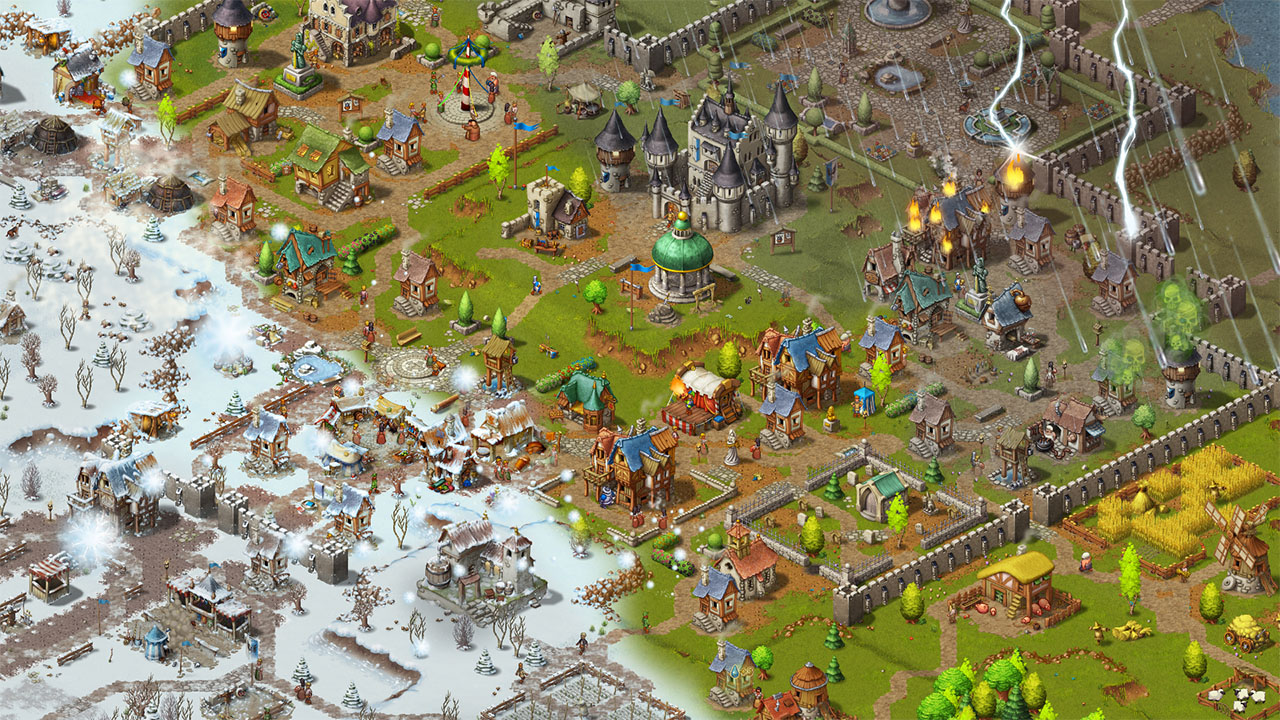 One of my favourite things about Townsmen is it’s weather system and seasons. Purely because it was so unexpected. Yes, the game goes through all the seasons, each one affecting your villagers in different ways, bringing new challenges to overcome. During each season the weather will change based on that, for example, during winter you will experience blizzards. Another bonus of the game? You also have various achievements to unlock. You don’t get anything for them but hey, who doesn’t love achievements?

Overall, Townsmen is a brilliant game for those who enjoy strategic, city building games or if you just want a game you can sit down and relax with, passing the time without realising. The amount of depth this game goes into crazy, but it isn’t overwhelming which is great. It’s easy to pick up and play for an hour here and there and is the perfect game to play on your Nintendo Switch.

Build your own Medieval village and then turn that village into an Empire.