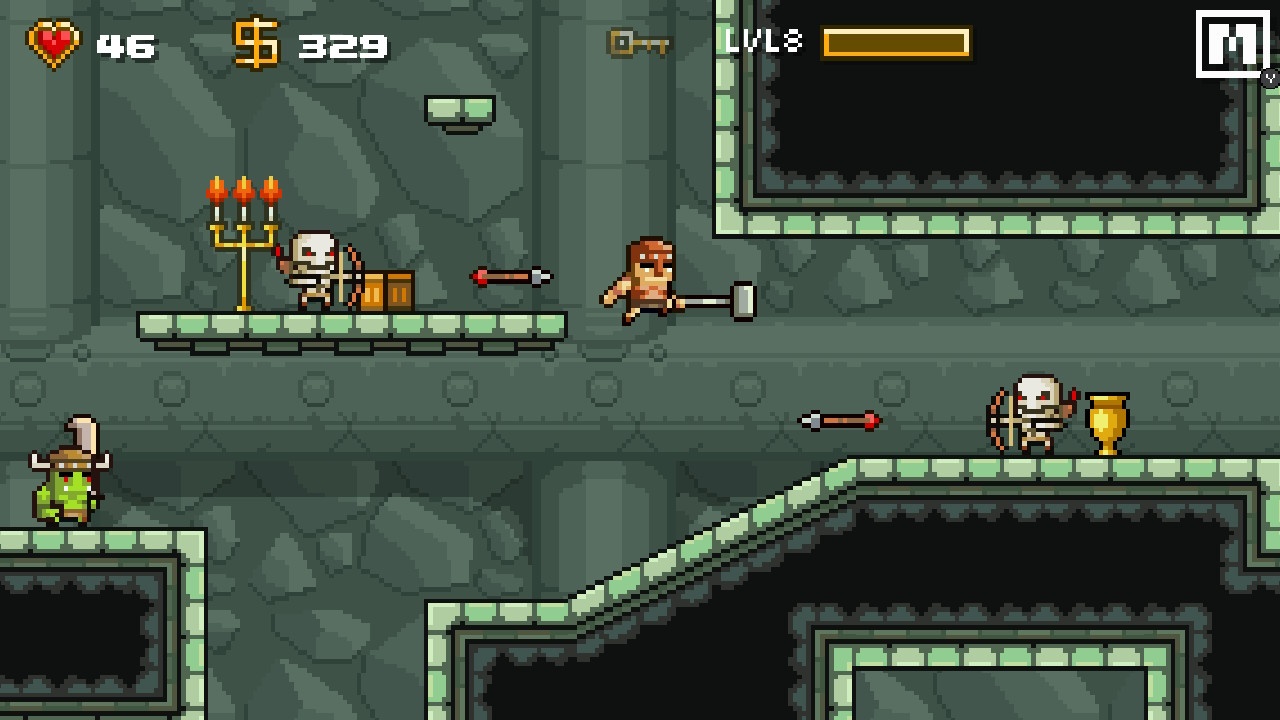 Fidget spinners have come and gone, and it’s easy to see why: it was a fun enough idea that the market at large jumped onto a little too heavily. What began as something that was somewhat interesting and clever enough in its simplicity became this overwhelming saturation point, with terrible developers making unironic fidget spinner video games, creators making weird YouTube videos and businessmen – people with ties and suitcases and JOBS – handing them out at career fairs and for making new bank accounts. Sometimes, people don’t seem to understand that something can just be simple and fun, have a bit of a unique twist to it (I did enjoy the Batman shaped spinners) but not need an extraordinary number of bells and whistles. So, for this reason, I’m incredibly happy with the creation and Switch porting of Devious Dungeon.

The plotline here is so thin it’s basically transparent. There’s this big evil under the castle, all the brave knights are dead, and you’re this heavy metal warrior who’s gonna go fight it to death. Along the way, there’s cash, mini bosses and plenty of quests to fulfill. You don’t have magic. You don’t learn archery or whatever. You move forward, you hit things, and you go down. That’s it. And it’s glorious in its delivery. 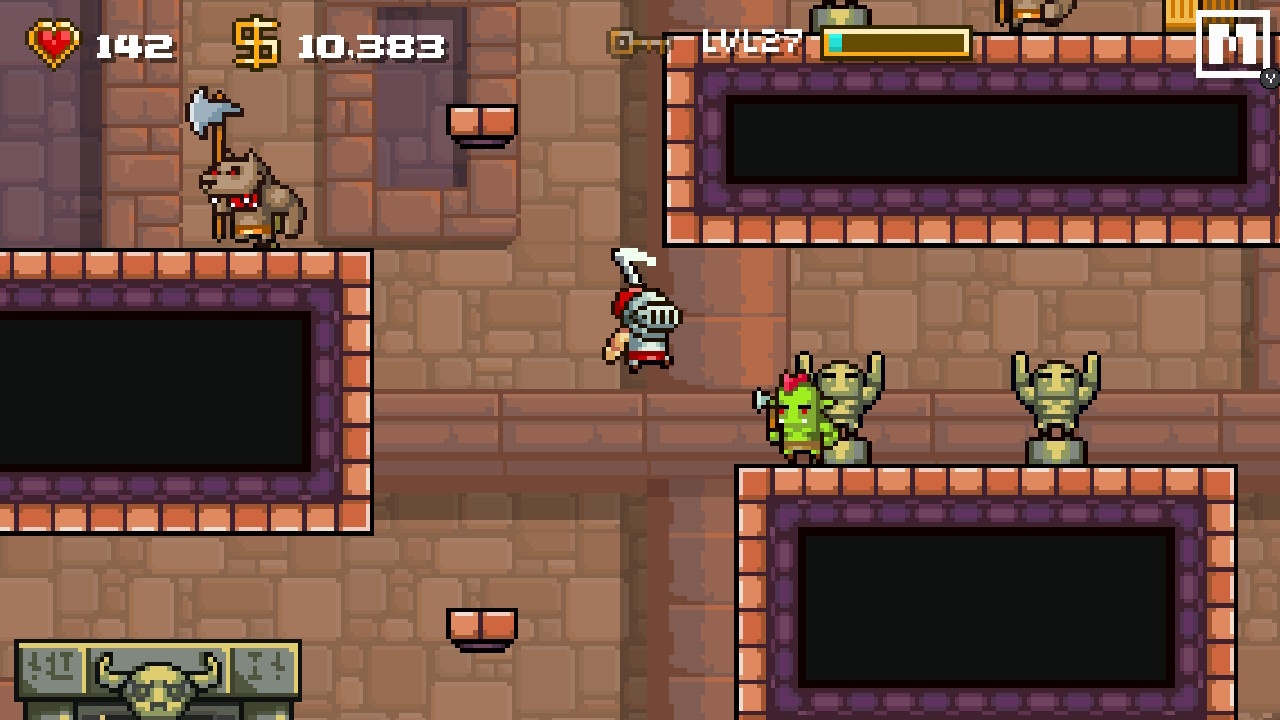 Ratalaika has been hit and miss when it comes to bringing their mobile games to the Switch: League of Evil was a pretty good representation, but Squareboy vs. Bullies was pretty humdrum and bland. The secret is to pick something that did well on mobile not because it was an inherent time sink, but because it was a well executed time sink. In the case of Devious Dungeon, you’ve got a slightly roguelike sidescroller that gradually progresses into gradually more difficult and dangerous situations. Starting off with slow, skeletal archers, you quickly work your way up to powerful wizards, wolves and even dragons, all of which want to keep you from getting to the lowest level. Smash things and kill dudes to collect cash, buy and unlock new armor and accessories. Continue on until you win.

Now, this is what separates the wheat from the chaff. On the one hand, this could be something that might go in any number of directions. Maybe the game is an endless runner of sorts that involves just mashing the same button over and over until you die. Maybe you can unlock a legendary sword “for a small, one time payment.” Or maybe the game is simply plagued by boredom and failure from the word go, and you spend all of your time trying to argue with Nintendo over the refund charge because you don’t want this to stain your Switch. But none of them are the case. Instead, what you get in an incredibly simple but polished, tight and fun adventure/action game. You only have two buttons to worry about: jump and hit. Hold down jump to jump higher. Hold down hit to keep swinging nonstop until whatever in front of you is dead. It’s not complex, but it is well done, thanks to the smallest of role play elements. As you continue to kill things in Devious Dungeon, you get EXP, which, in turn, levels you up and lets you beef up a single stat. Increase Strength, Stamina or Dexterity to help build yourself a heavy hitter, an HP hoarder or a nimble hero. Each level is only one point, but death doesn’t reset your level so it just keeps building.

As you gain levels, you get coin from treasures and random quests (kill five things or collect ten things), and the cash gets redistributed back into new EQ. The equipment also stays unlocked, but not purchased, so you have to use the money on you when you died to outfit yourself before jumping back in. I appreciate being able to make progress where it counts but not just staying an immortal, infallible host. I may be godly in level, but I’m broke and naked as a result. It’s good, it’s a proper balancing act to keep things from going bananas. 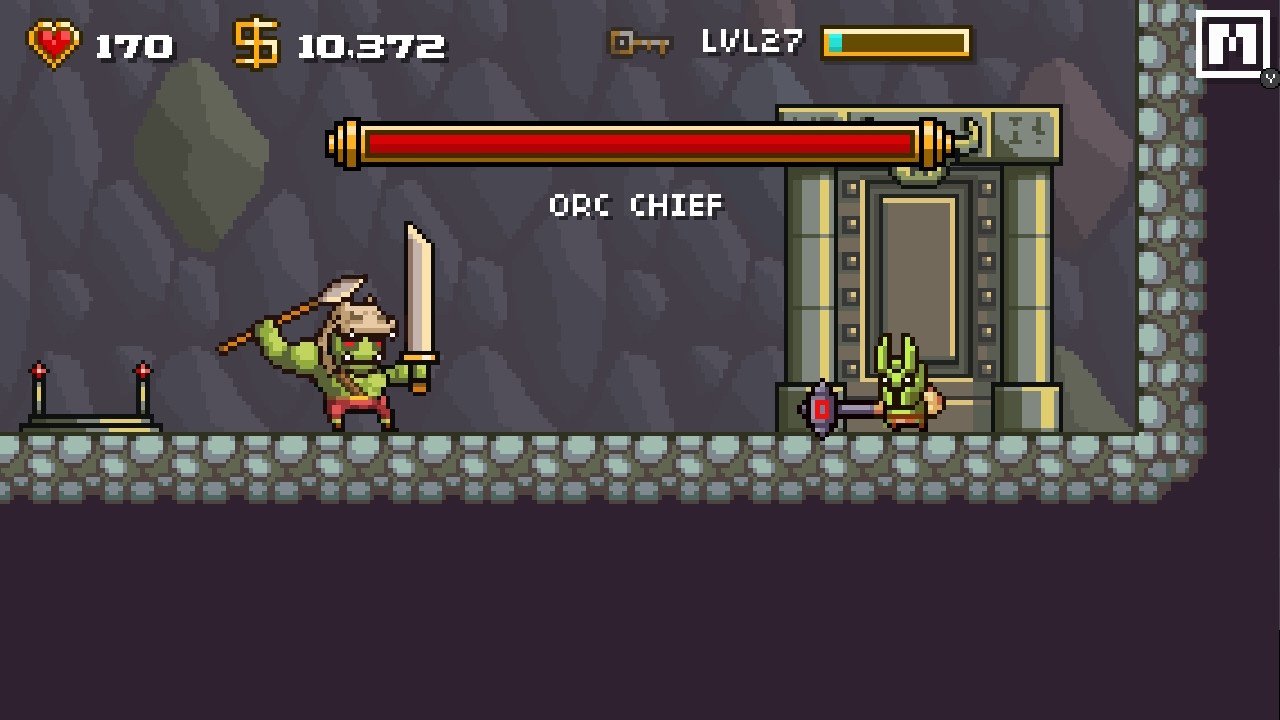 Speaking of which, if you prefer to take a running start, when you die you can restart from any number of level checkpoints (which the game decides) or simply start again from the beginning. There’s a traveling caravan of a merchant and healer every five levels or so, so you can jump back to dungeon one with you big-ass self and brutalize your way back to where you left off, collecting coins and crushing dreams in your wake. The game gives versatility as to how you want to play. Additionally, going back is a good way to unlock more of those achievements that have been generously baked into the game, even if there’s still no central, online way to enjoy and share your achievements (c’mon, Nintendo!).

You know how everyone likes to play some kind of ridiculous time-sink of a game, usually a puzzler? This is a fun and progressive time sink for players who want something different. Devious Dungeon is a no-pressure, no frills kind of game that lets the RPG or adventure fan play a little something on easy mode without totally automating the experience. There’s plenty to do, unlock and enjoy, tons of enemies to slay and a lot of loot to discover (not to mention the occasional hidden room in some dungeons!). All in all, this is a really decent mobile port, with some minor button issues that are easily overlooked by simply getting the hang of the game. If you’ve got a very light thirst for adventure that can be easily quenched again and again, then Devious Dungeon is a decent fit.