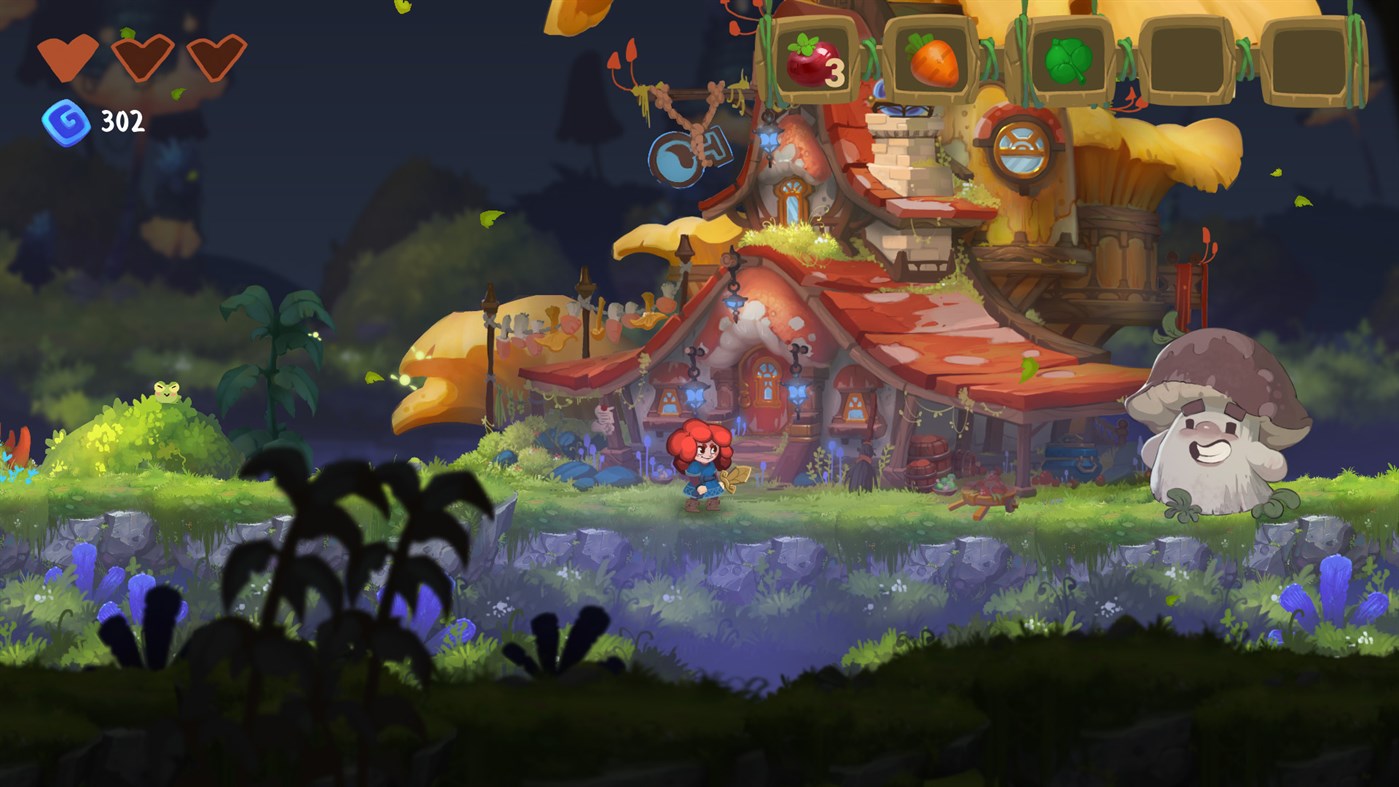 Platform games really have evolved from the early days of Super Mario Bros. The simple run from start point A to end point B simply doesn’t do it for the new generation of gamers. They want something more in depth; puzzles, battles, and a compelling storyline. When I was asked to look at the latest title by Potata Company, Potata: Fairy Flower, I had my reservations. As a child, I loved the simplicity of the platform genre, the 8 bit sound effects, and the joy that could be had when I eventually found a secret location. As I’ve grown up I’ve left these games behind. For me they have moved too far away from what makes them great, they are trying to please too many people, and have diluted the pleasure out of the gameplay. Can Potata: Fairy Flower convince me to return to the genre? Or will my concerns be justified?

You play as Potata, a young witch who allows herself to be distracted from her daily duties, due to her love of fairies and flowers. The story begins in your house, you awake to find that your Totem fox is unwell, keen to make it better you speak to your mother to obtain a cure. From here your adventure begins, you must obtain several items from the opening level, these will be used to make a potion. Little do you know that as the stage ends, you will approach a rather angry fairy who is not happy that you have damaged her flower. She takes all the ingredients off of you, and subsequently you begin the true adventure for this title. You are now commanded to retrieve the 6 petals of the damaged flower, by doing so, you will undo your mistakes, and make the world right.

This side scrolling 2D colourful adventure is particularly challenging to master. With very loose guidance, you are left to your own devices to solve any of the problems that you may face. As you move from left to right, you will observe tokens located in various areas, these must be collected as they form the basis for all transactions within the game. With minimal hearts available to keep you alive, and seemingly every spiky object causing you permanent damage, you will be required to act carefully and cautiously in order to survive. Save points can be found throughout each level, but using one will cost you some of your tokens, so you really must weigh up whether it’s worth spending the money just in case you were to die. As you progress you will encounter several puzzles, some of these are particularly challenging to complete. You are given the option of a solution, but again this costs you, and at one point I didn’t have enough tokens, and no idea how to complete my task. I spent many hours cursing my luck, but eventually I was able to work it out. I hear you shouting YouTube has guides, you would be correct! However, what’s the point of taking on a puzzle game if you take the simple solution? 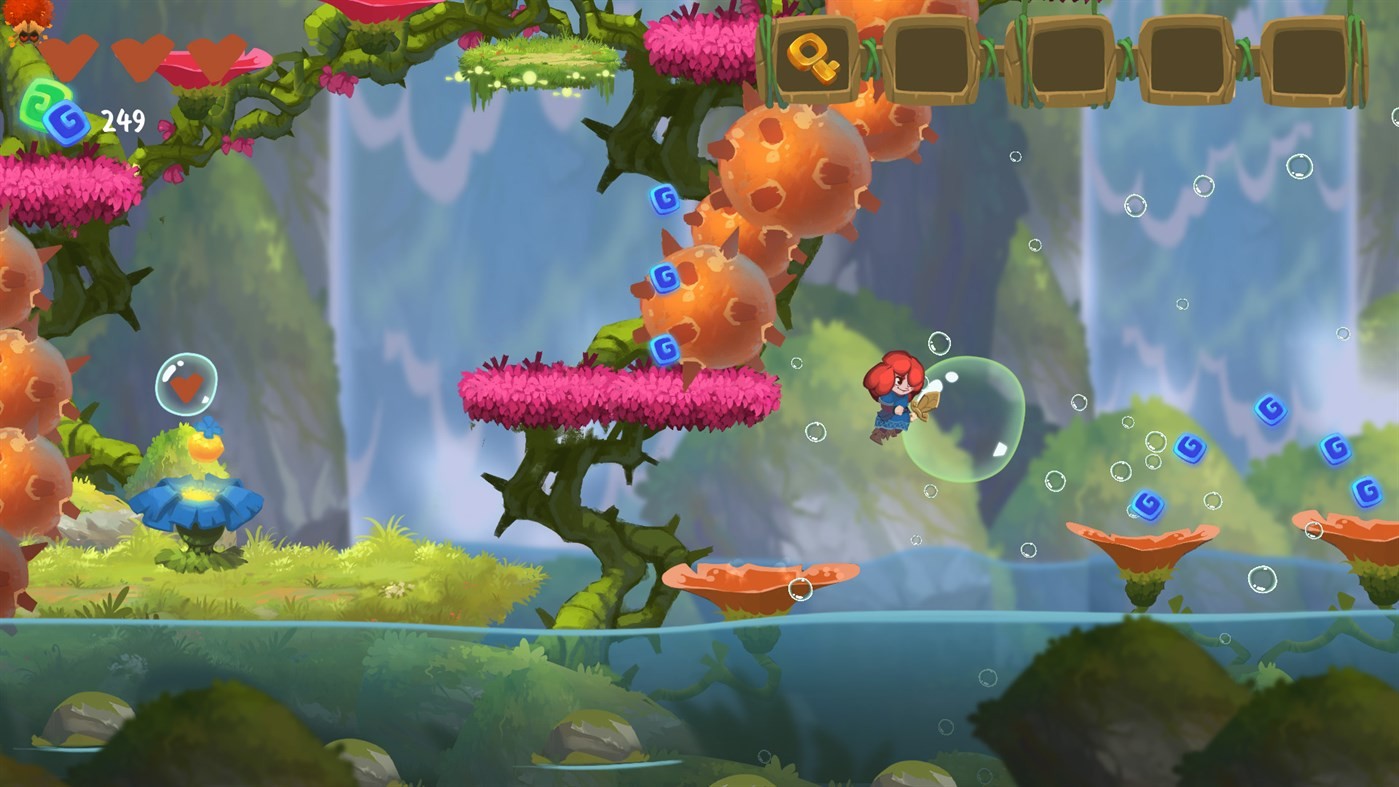 As the game develops you are given more options to attack your enemies, this adds a nice twist to the otherwise slow gameplay. Like all platform titles, you will need to be patient, and plan your approach. An accurate eye is required to complete each jump, and a fair amount of observation skill is needed to find all the hidden objects. I really liked that all the items that were collected were needed to solve the stage. If you are particularly OCD about collecting everything, then this will be quite rewarding for you, as a clean sweep ensures that you will be able to proceed. The storyline was a little confusing to begin with. As already mentioned, the first fairy is angry at you for destroying her flower. You never observe this happening, so this curveball comes out of the blue, and suddenly puts the story on a whole new path. It doesn’t impact on the gameplay, it just makes it feel very inconsistent, and bitty.

None of the levels are particularly long, but they seem to take an age to complete. With the slow, contemplative action, and death all but a certainty. You will find that these deceptively short stages, will take some time to complete. This approach really tested my resolve, I desperately wanted to enjoy the game, but, I just found it frustrating. I struggled to convince myself to keep pushing on with it. Its saving grace was the puzzle element, though tough, it made me think outside of the box, and for me was probably one of the best elements of this title.

An extremely colourful and cute presentation was my first impressions. The design didn’t feel modern, more like an early Xbox One title, but this didn’t matter too much. The level designs were great, well thought out, relatively easy to navigate, and really nicely detailed. The colours used were vivid, and matched the magical theme well, this made all the collectible objects stand out, so they were easier to spot. The developers failed to allow you to pan the camera around the world, this meant that falls from the high areas to the low points, were always a bit of a gamble. The amount of times I died due to this issue was annoyingly high, it certainly increased the levels of frustration, and was probably an aggravating factor in my disdain towards the title itself. All of the narrative takes place in a written form, which appears at very odd times. It fails to explain many aspects of the story, and as such, you will no doubt be very confused as to what is going on. What also compounds the issue was the poor translation. There were plenty of spelling mistakes, amusingly I noted that Potata, was referred to as Potato on several occasions, this made me chuckle every time.

There was something quite magical about the music used throughout. A slow tempo flute music accompanied the action, this airy and simple track gave the game a light hearted feeling. It was reminiscent of a medieval song, and had a sense of mystery and magic about it. The nice thing was how well it matched the pace of the gameplay, it never made you feel rushed. The sound effects were; fun, and playful, yet nothing that you haven’t heard before. It was sufficient for the genre, but not spectacular. 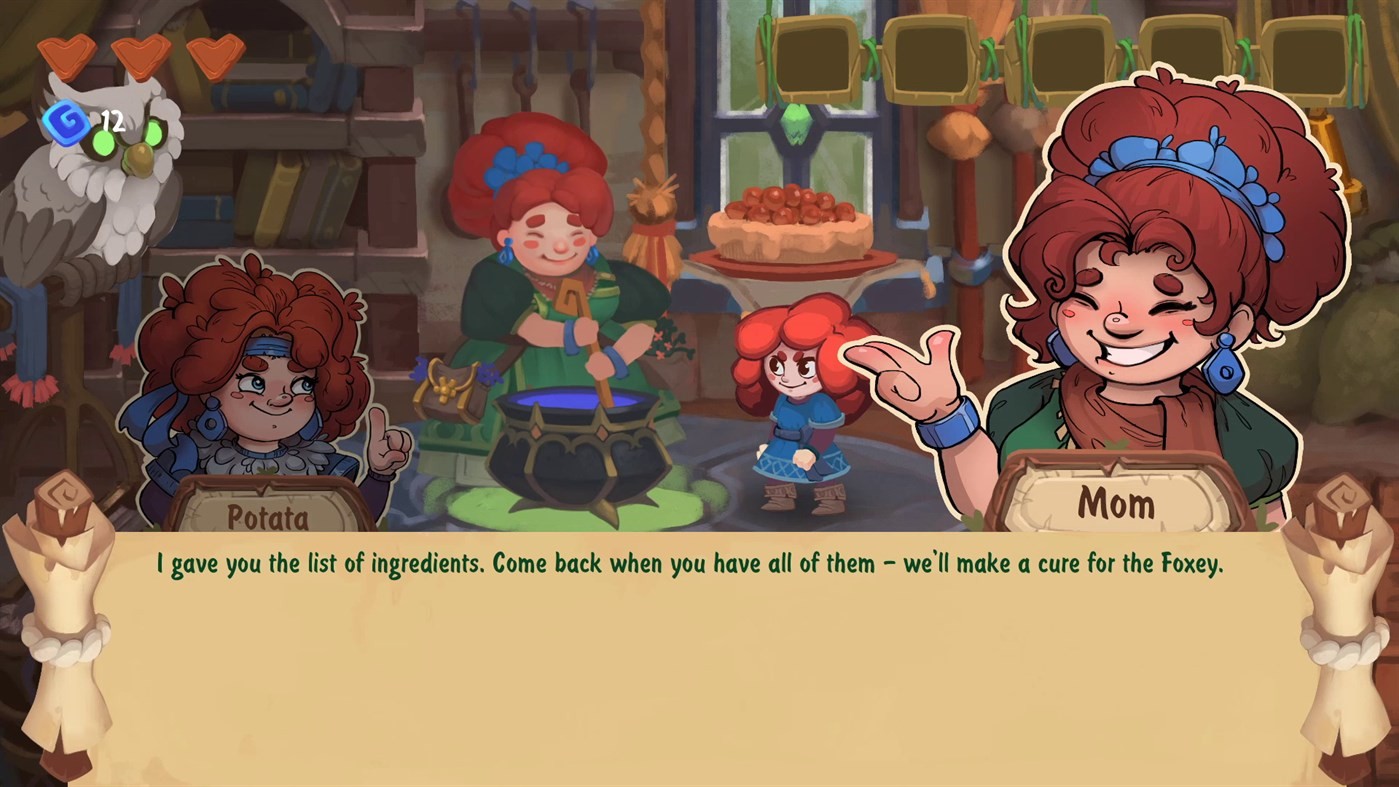 With so many precision movements required to succeed, it was necessary for the developers to create a tight and easy to use control setup. Fortunately, this was the case, the movement and jump functions are quick to respond and were accurate. The only thing to let you down here, will be your own skill! Potata has done well to keep everything as basic as possible, even the puzzles were simple to interact with. It was nice that you could master the controls pretty quickly, so all you had to focus on was the task at hand.

If you happen to suffer with a lack of patience, you probably won’t want to return to play through Potata again. If you love a platform game where you must be focussed and careful, then you will adore this. I personally found it a bit too slow paced for my liking, and though I want to get the 100% completion on it, I probably won’t. For some unknown reason Potata Company hasn’t allowed a level select function, so if you happen to miss an achievement, then the only way that you will be able to obtain it, is by playing the whole game again. You will be looking at somewhere between 10 and 15 hours to complete this one, but, this obviously depends on your ability within the two distinct genres, platform, and puzzle.

A vibrant, and cute looking game that has a delightful audio. The slow pace, and cautious approach will not be to everyone’s liking. A lack of fluidity within the storyline will cause confusion, and the tough puzzles, and almost guaranteed death will be a deal breaker for a lot of casual gamers. Easy to pick up and play, but tough to complete both physically and mentally, this one is going to be successful in a very niche market. If the developers had allowed for a level select, free saves, and an ability to pan the camera around, then this would have been a much more accessible game. Unfortunately for me, I’m not going to be able to rave about it, therefore, would I recommend playing it? Probably not. It’s not a terrible title, but falls short on too many elements for my liking.

A colourful platform adventure game that is designed for the patient gamer. Damaging that flower was a big mistake! Time to right the wrongs, and collect each of the petals to put things right.