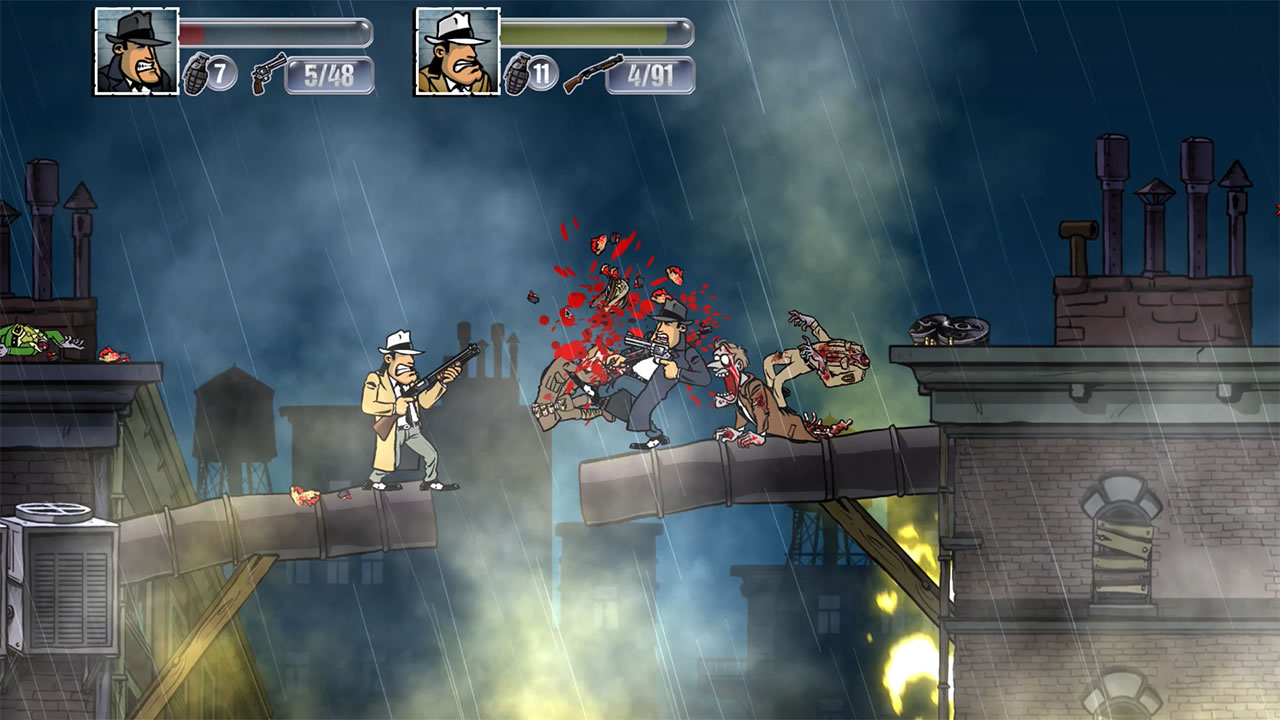 The city. A hotbed of crime, opportunity and badly made up Italian stereotypes. It’s a tough world to be in, but you, Vinnie Cannoli, are one tough guy. Not everyone can be an enforcer that is somehow both independent and working for the mob, but when you’ve got a gun with unlimited ammo and a full belt of pretty run-of-the-mill quips, you can make it work. So when it looks like your latest gig is full up of zombies, why not just shrug your shoulders, holster your weapons and fuggetaboutit? And with that last nod to whatever poor imitation that just was, we dive into the world of Guns, Gore & Cannoli.

This sidescrolling shooter is certainly something to write home about, and it all starts with the art style and animation, which is pretty top notch given what the developers,Crazy Monkey Studios, were going for. Vinnie is a pretty stocky little dude, but he’s armed to the teeth with guns that just keep getting left all over the place, as well as various throwing weapons that do some decent blast damage. The city of Thugtown is as gritty as you can imagine a caricature of 1920’s New York to be, and you spend plenty of time diving into busted apartment buildings, run down warehouses and dockside encounters that can only be described as “unpleasant.” But everything is exceptionally well drawn, and really draws you into the overall world and effect with minimal effort. I especially liked that the tables, doors and crates do a solid job of popping with wooden presentation to make you aware of them and, in many cases, remind you that you need to blow them up. 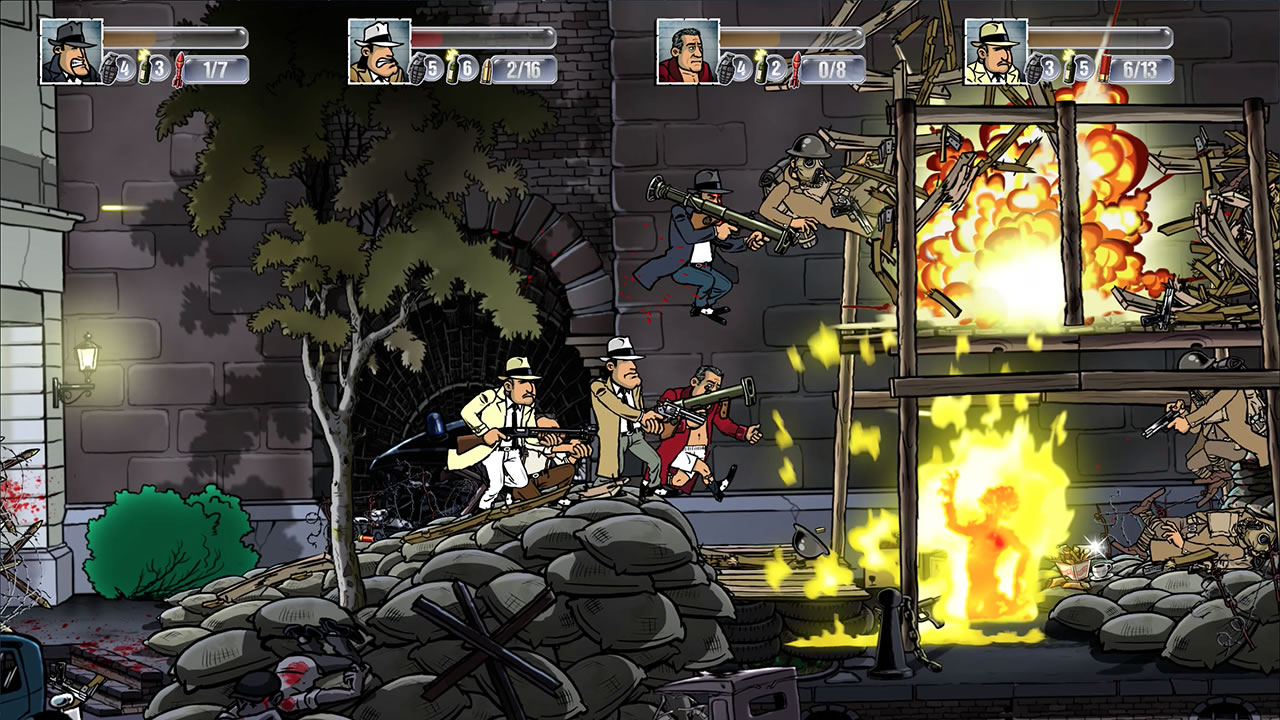 Guns, Gore & Cannoli is straightforward in its expectations of the player, giving you a walking tutorial as the game starts up (after selecting the difficulty) and then dropping you straight into the madness right away. Your primary weapon has an unlimited number of bullets, but does need to be reloaded every eight shots or sooner, something that always catches me off guard in some gunplay games. If I have unlimited bullets with this gun, why should I worry about reloading? Still, it gives players a chance to use the coveted “kick” button for something other than triggering switches, but it barely buys you more time than you’d get if the zombies just bit you. As soon as possible, you’ll want to swap to another gun, be it the tried-and-true shotgun approach or the “my God this is stereotypical” Tommy Gun. Though, if I’m being honest, I wouldn’t recommend the Tommy Gun: the rate of fire doesn’t deal a ton of extra damage, plus there’s no kickback to make the situation worthwhile. At least with the Revolver you find later there’s some serious damage to be done, but Tommy doesn’t offer a lot except for “lots of bullets.”

Now, as for the baddies, the zombies (who make up the majority of the enemies) are nothing to sneeze at. Shifting between shambling and sprinting, every single AI is one thing in particular: tenacious. No matter how far you go, how high you climb, as long as there’s a path available, the zombies will continue chasing you. I made the mistake early on of thinking I could just blow past a few of the undead with some well timed jumps, but, when I needed to bunker down to deal with a cleaver-chucking chef, I suddenly had a team of angry biters coming up directly behind me. This teaches the player an important lesson: you are the protagonist, everyone knows it, don’t neglect the fact that you need to shoot the crap out of everything. Thankfully, at least on the lower difficulties, there are plenty of powerups to be found, from additional ammunition to some wonderfully Italian foods that just get left around for Vinnie to slurp down and recharge, with an exclamation that you would imagine from this character. 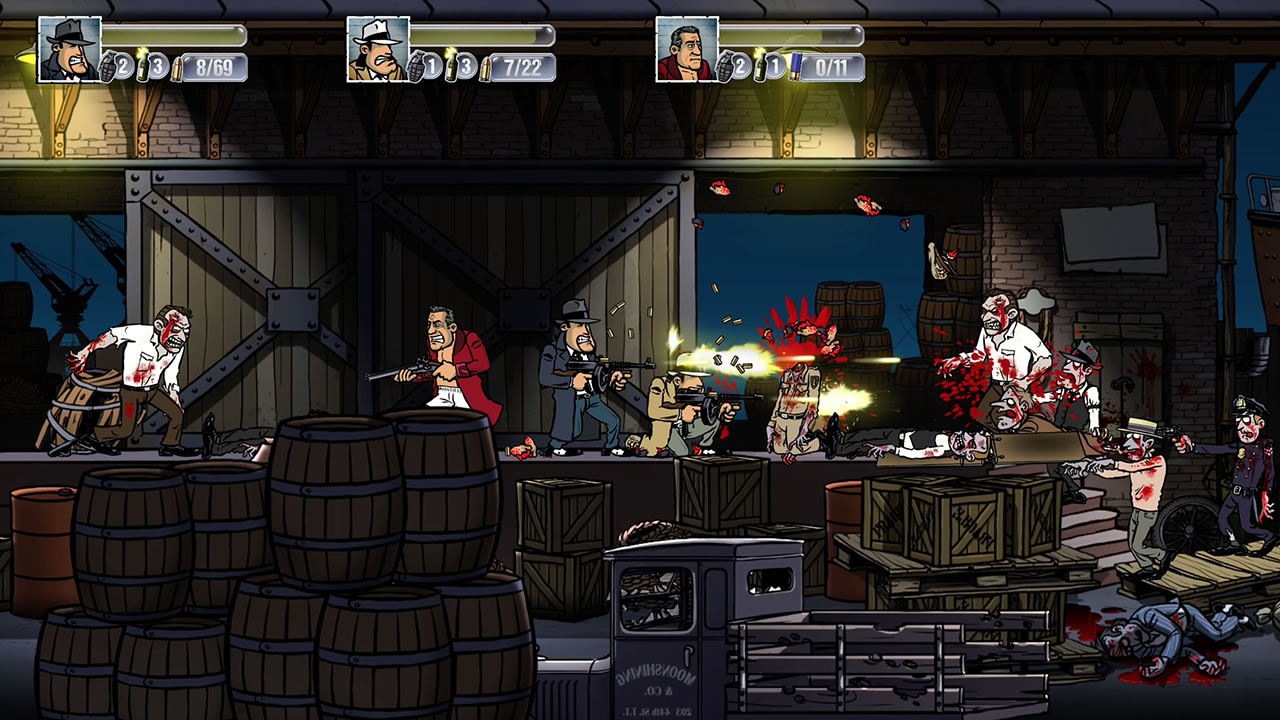 Let’s make one thing crystal clear: Vinnie is an amazing, hyperbolic version of what you’d imagine a gangster from the 1920s would be like when faced with a zombie apocalypse, plenty of ammunition, and also facing off against the army, other gangsters and, inexplicably, leprechauns. Most of his existence is dedicated to some severe braggadocio in the face of a situation that has literally no protocol or existing contingency in his mind, and he does it with a bit of grim humor and an almost admirable unflappable personality. At first, I felt like it was a bit too easy to lean into the tone and ideas of this character, but then I realized it really helped to build the world and the atmosphere of where Guns, Gore & Cannoli takes place: otherwise it’s just a rather simple side-scroller with zombies. This is compounded even further with the multiplayer avenues, which, straight up, are a blast to play. When you have a grand total of four mobsters running around with flamethrowers and spouting the same damn lines over and over, it’s campy fun that no one can ruin.

Even as the Switch now has the most crowded marketplace I’ve seen flourish in such a short amount of time, it’s still plain to see why indie devs continue to flock here, both with the hopes of grandeur, but also redemption. A game like Guns, Gore & Cannoli is fun but forgettable in a simply choking Steam storefront, but there’s still a chance to live and breathe comfortably within Nintendo’s playground. And with something that’s both dead simple and well executed, you can bet that the right crowd – the “finally returning to console, what did I miss” group – is going to find a lot of replay in the alleys and apartments of Thugtown.