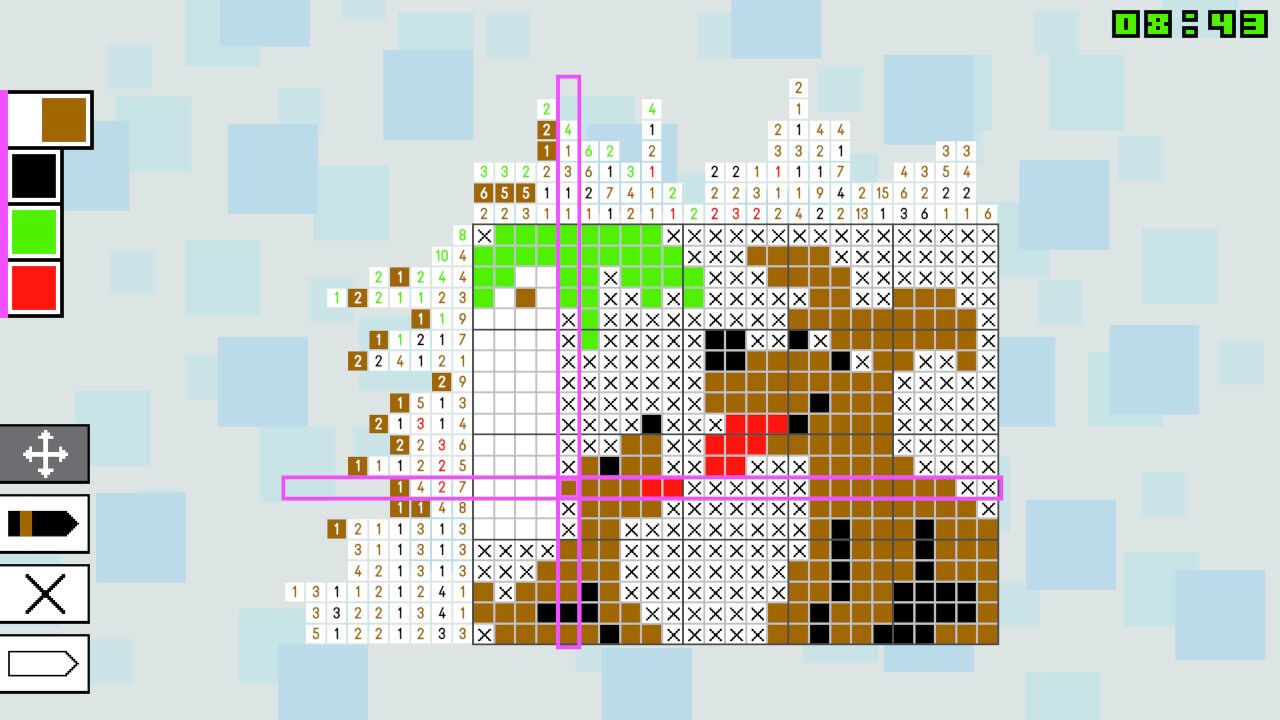 Pic-A-Pix Deluxe is one of the most simple, bread and butter pixel design games that I’ve ever seen, and I say that in a really positive way. One thing that I do notice is designers always attempting to reinvent the wheel, which can, usually, work into something grand and interesting that captivates the audience for hours, if not days. But it can also be arduous and, frankly, bizarre if not handled correctly. I recently took a swing at Puzzle Box Maker, which left me scratching my head with several choices the developer made regarding mini games and odd controls. Pic-A-Pix Deluxe, on the other hand, removes any and all mystery regarding your goal, and sets you off to make a pixel picture.

Unlike a lot of other pixel games that are currently on the Switch’s market, Pic-A-Pix Deluxe is incredibly no frills and jumps right into things with barely a warning. There’s a very limited number of choices when starting up the game: you can download some additional black and white levels from the Nintendo servers (highly recommended if this is your jam) and there’s a ten page explanation under “info” that lets you know how to play, which, if you’ve done a second of any pixel drawing game ever, you won’t need. After that you get thrown into the game with your choice of one hundred and fifty different pictures, all unlocked, starting with simple 5×5 grids and expanding massively in no time flat. Each column has a set number of colors and pixels that you need to fit in somewhere, and the game lets you know when it’s done when it reveals the full picture you’ve just drawn. 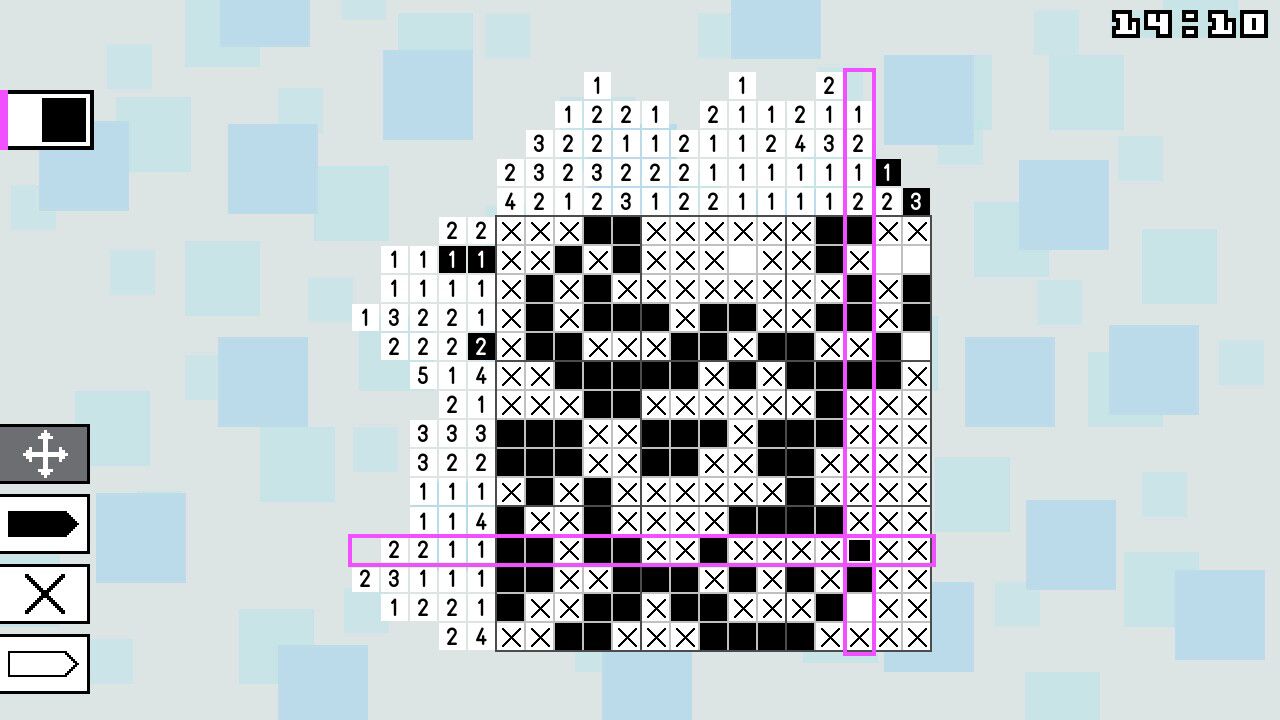 Now, this is a rough game to come into for someone who’s never done pixel design before, because there are zero hints or indications as to what you’re drawing beforehand. Whereas with Picross you usually get a subject or something, this is simply “red, green and yellow, get moving” and then you need to logically put things together. Pic-A-Pix Deluxe is definitely the colorful version of Sudoku, and that should be all you need to figure out if this is the game for you or not. If you have the patience for the number puzzle normally, good news, this is a great variation on that very idea. If you hate methodically putting things together and then finding out one number is out of place, then skip it.

I personally loved the interface of the game and how Pic-A-Pix Deluxe functions as a title. It was simple to move between the lanes with the joystick and then draw in the colors with A, deleting with B, and toggling between colors with the shoulder buttons. Touch screen interaction is a possibility, so my main complaint of Picross S doesn’t exist here, but I actually liked the buttons better for the smaller puzzles. If there’s a lot of mistakes happening, you can simply click on the menu and hit the “fix” button to remove any erroneous tiles and just focus on what you’re doing right. This might seem a little cheap for serious players, but two quick notes. One, you’re a serious Picross player, consider that when you move forward in life. Two, the fix button is invaluable for people who play this style of game in a more relaxing fashion. Sometimes you just want to draw a pretty picture and get surprised to find out it’s a duck, not bash your head against the wall while screaming about needing three green in a row but it won’t fit anywhere. Just hit fix and poof, your problems are solved. 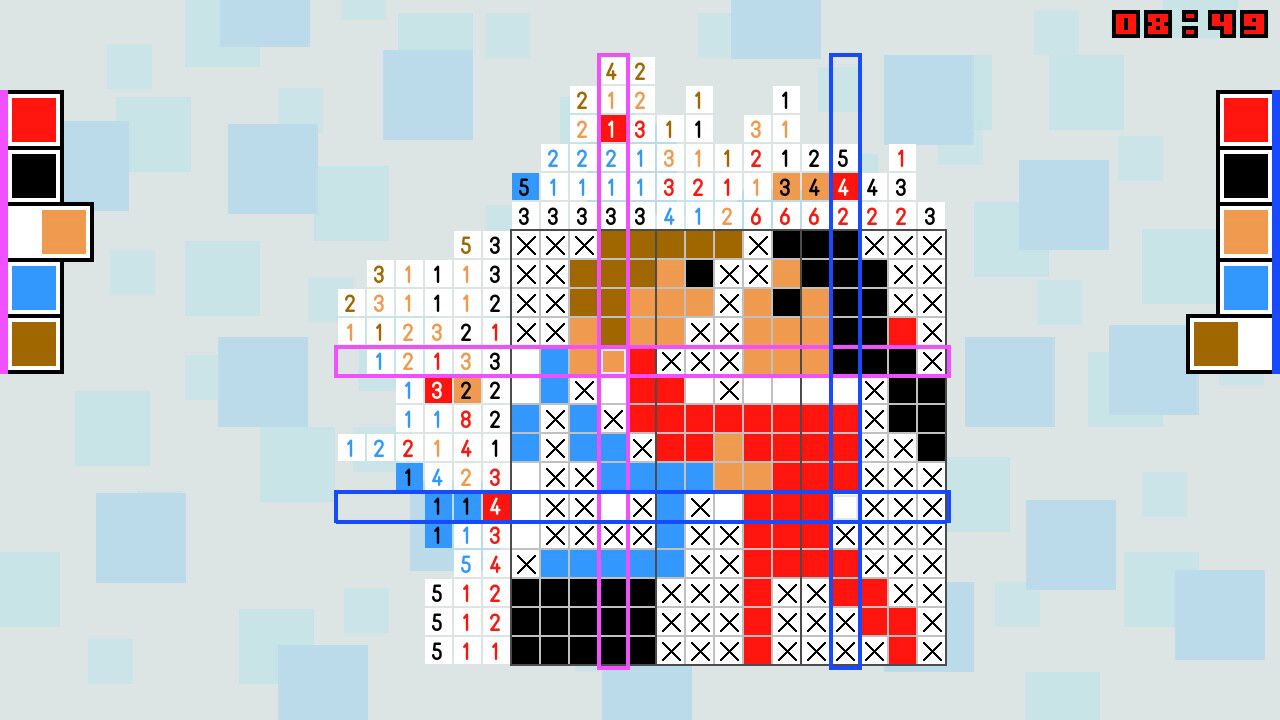 This review seems especially short, but that’s because there’s not much else to talk about. Complete the picture fast and accurately to get medals and download more when you’re all done. This is the game equivalent of the puzzle book you impulse grab at the supermarket when you’re checking out. It’s a lot of fun, there aren’t any competitions or people to fight with, and, when you’re done, you’re satisfied and happy that you spent the time letting your mind focus on other things.

Unlike those books, however, you can delete your save game and start fresh in a few months when you’re itching for something to pass the time and you simply can’t muster the strength to get into a serious RPG or action adventure. Pic-A-Pix Deluxe is simple, delightful and will instantly appeal to the players who like this style of puzzle. By all means, get it when you’re ready to let hours slip by.