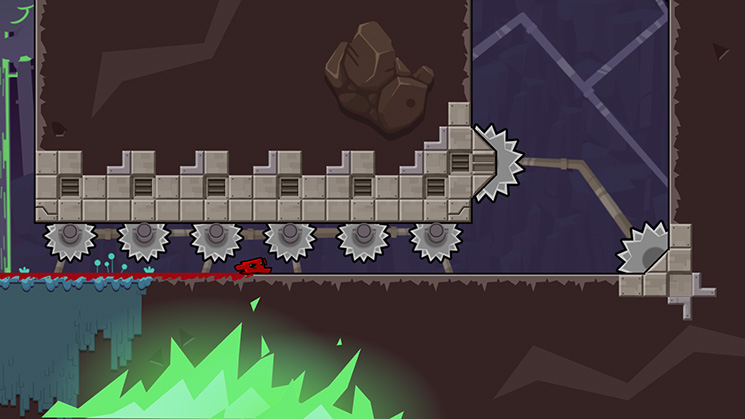 Quick show of hands, who’s bought a game on multiple platforms? Alright, fair number of people in that boat. Ok, who’s bought a game multiple times and hasn’t even beaten it? Huh, ok, good times, glad to see I’m not alone. Yes, there are games that have been added to my library three times over (thanks, non porting Virtual Console) but I have, at least, completed every time I re-purchased them. But, thanks to Steam, there’s an ever growing number of titles that I have barely even launched, much less played to completion, and Humble Bundle is mostly at fault here. But the nice part about my love affair with the Nintendo Switch is that it presents games to me in the way that’s most likely to get me to play them: fully installed with no worries about if my rig can run it or not. So, after existing for almost eight years, on more systems than I care to list, I finally, finally dug into Super Meat Boy. And I’m so glad I did.

You know you’re in for a nostalgia trip the moment a Newgrounds logo is splashed across the opening credits, but don’t let that be a hallmark for quality or substance for what happens next. If you’ve never entertained the story of Super Meat Boy, it’s the classic tale of boy tries to save girl from an evil doctor. We’ve all played it. Only this time, the boy is a giant cube of bloody meat. And the girl is made of bandages. And the evil doctor is Dr. Fetus, which is literally a fetus inside of a robotic suit that he’s designed. The whole thing smacks of the bizarre and frankly ugly humor that made up a lot the quality flash content back in the day (this was a few years after Salad Fingers, thank God), but it’s certainly not over the top or raunchy in any way, shape or form. In fact, you realize there’s this tenuous balance that’s been struck to keep the game surprisingly light hearted in spite of everything you see. Meat Boy obviously leaves a sanguine trail everywhere he goes, and the game’s design and atmosphere speak of something dark and sinister, but there’s somehow a lighthearted spin that keeps everything afloat. I don’t know how they do it, but Team Meat (who went on to make The Binding of Isaac) is able to control the narrative in a way that keeps this from becoming something awful and morbid.

The game itself is a side-scrolling series of time attack puzzle platforms, with the objective of each stage being to get to Bandage Girl as fast as you can. The way each stage lays itself out is an ever evolving situation, and it does start fairly simple and innocuous before riding the difficulty incline straight up into the Sun. For most of the levels, Meat Boy has only two abilities: jumping and wall jumping. He can stick a bit to vertical surfaces, being made of meat and all, but not every wall and pillar is hospitable, and sharp debris and angry mobs can make it a bit trickier than simply running your heart out. Every time you touch something deadly – saw blades, flying death, rapidly spinning fans – you’re out, one hit, no saves. So it becomes essential to make sure that your targeting is on point and exact, because the game is purposely unforgiving and doesn’t clean up your messes. Meaning, depending on the level, the entirety of the floors, walls and ceilings may be stained red by your mistakes before you finally reach your beloved. Best of all, the completion of a stage triggers a replay of every single one of your defeated attempts at the same time, so you get to see dozens of yourself foolishly running into the same exact pit over and over again. Joy! 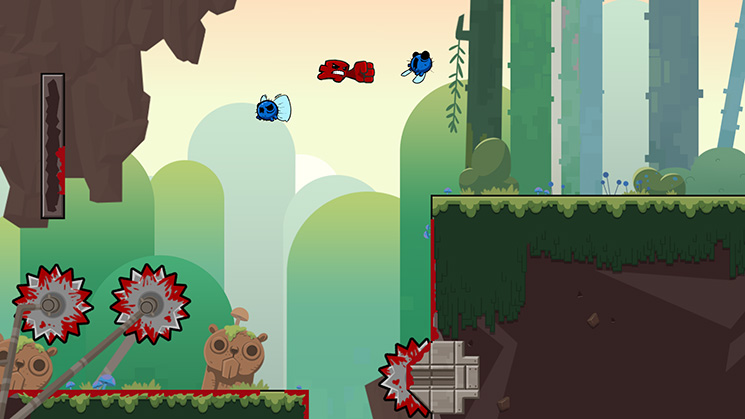 Besides the main levels, there is a never ending bonanza of extra stages and ways to play that present even greater and more insane challenges. Many of the core levels have bandages (presumably dropped by bandage girl) that can be collected, and they’re always far, far out of the way. The Dark World exists, which is a parallel land inhabited by even more difficult and bloody stages that mimic levels you’ve already accomplished impeccably and gotten an A+ on (A+ comes from really great speed). There are boss fights, which amount to you trying to survive Dr. Fetus’ direct onslaught the only way you can: don’t die. And, best of all, there are Warp Zone levels where you get sucked out of the main world  These warp zones put Meat Boy in a stylistic homage to any number of games, from classic Gameboy mode (complete with monochrome screen) to direct nods to other indie games (such as Bit.Trip Runner).  These Warp Zones are terribly difficult unto themselves, as they have limited numbers of attempts on each of the stages and, generally, don’t play out like the typical levels of Super Meat Boy, but it’s incredibly satisfying to accomplish each one.

In fact, that’s the main thematic of Super Meat Boy that I’ve noticed, and I’m digging it in such a big way. The game makes zero apologies for how difficult it is, and only gets harder the further along you move. Being precise with your jumps, runs and collisions leads to mere millimeters that garner success or failure. Players will have to adjust their expectations and grips in order to figure out the best way they can comfortably run, and it’s advised to stay the hell away from YouTube, where some of the best players have dedicated years to getting better and better at this game. When you get that final landing and grab Bandage Girl after dying over and over, the rush of glee is almost intoxicating, and you can’t say that about many games. This isn’t a matter of poor code design or controller input lag or whatever other excuse you’re looking for tonight. This is skill, and it’s learned, not inherent, and you have to be ready to be obliterated time and again before you’re ready to really run into the future of Meat Boy. 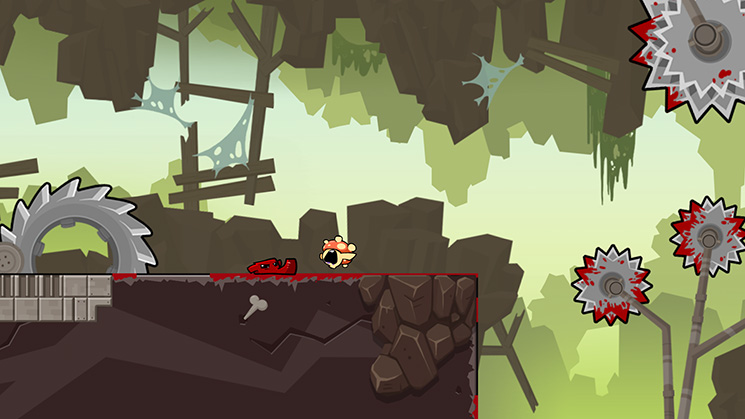 And you don’t even need to stick with Meat Boy himself. Through bandage collection and certain Warp Zones, you’ll unlock a variety of other characters to pay with on virtually any level, and their successes count as the successes for everyone. A level requiring too much hang time? Switch to Commander Video and float through certain sections. Long tunnels got you down? Captain Viridian of VVVVVV fame can swap things around to make them more exciting! Absolutely every level is playable to an enjoyable conclusion with Meat Boy, but why not take things from a different angle and enjoy them with a different vehicle? The only sadness is that Tofu Boy is not available, but that’s probably for the best, as, from everything I can tell, it’s truly a miserable character to behold.

Super Meat Boy runs like a shiny, bloody dream on the Switch, and finally makes the haunted tales of Super Meat Boy Forever vanish into the dark night (and I never owned a Vita, so I really can’t comment there). With detachable JoyCons being the perfect catalyst for race mode wherever you go, this is the definitive and absolute edition of a game that has been lauded and hailed and, finally, played, by me, in a total capacity. Even if you’ve given it a go before, it’s worth checking out if even a kernel of you is interested in seeing if you’ve still got the gumption to outrun and outlast this punishing, enticing title. And, for those of us who’ve overlooked this long respected game for whatever reason, Nintendo’s taken away your last excuse: it’s time to do some meat mashing.