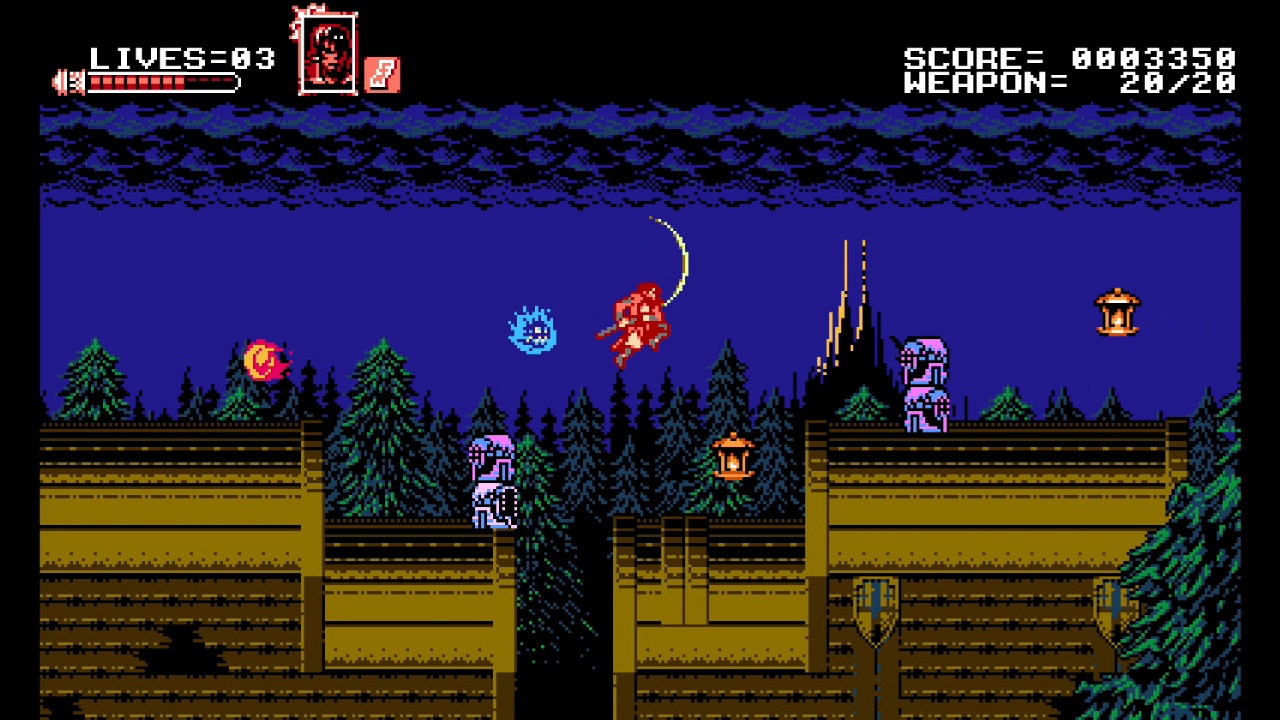 Bloodstained: Curse of the Moon is pure 8bit perfection. The moment the title screen pops up you are taken in to pixel heaven and a warm fuzziness will envelop you with a towel made of nostalgia and the tears of the Belmont family will quench your thirst.

Disclaimer: Curse of the moon was part of a kickstarter campaign for an action adventure also running with the Bloodstained name which will release at a later date but Curse of the moon is so much more than that.

Inti Creates has taken everything that we loved about 80s, 2-D Castlevania and repackaged it, reframed it and somewhat modernized it delicately. It’s not big on story telling but there is a great little twist at the end that opens the gate for one or two replays. Essentially you have to guide the demon slayer to slay the darkest demon of them all in a creepy as fudge castle. This simple premise worked back in the day and still works today. 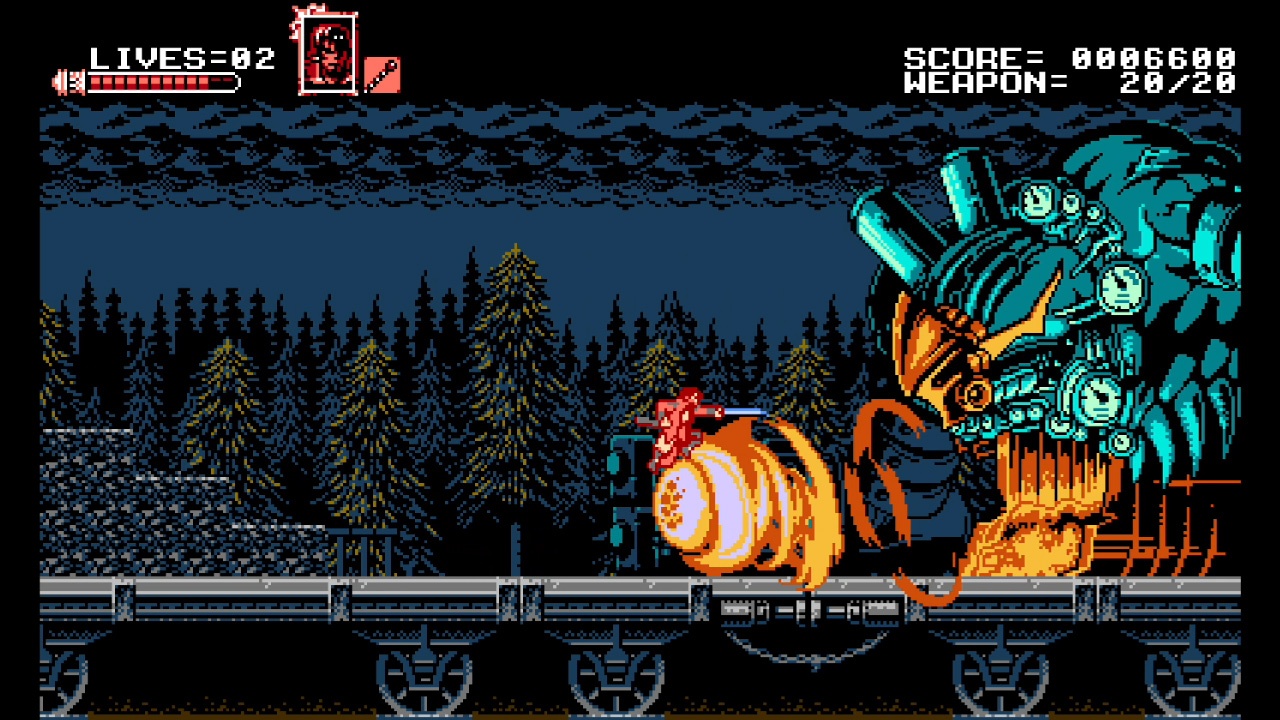 In the beginning its just you and your sword and whip and, oh boy, does Bloodstained whip it good. These mechanics are spot on and timeless. You’ll jump and slay your way through non-linear levels with branching paths and you are quickly and reluctantly making new friends with new abilities you can take over with a press of the shoulder buttons. All of these characters’ abilities are seamlessly fitting in the level design and you will need them to progress through short cuts, find secret passages or just to get that out of reach item. All but one character have secondary attacks which can vary depending on which item you have collected. This mechanic does introduce a bit of strategy and planning to your game. Each Level ends in a beautifully choreographed boss fight and, depending on chosen difficulty, ranges from casually fighting off a demon to rage quitting and almost throwing the Joy-Cons at my son (no baby was harmed during this review). Speaking of throwing: When you take damage you are not being thrown back, as 80s games usually have your do, into pits of a lava or something. Delicately modernized.

Bloodstained’s art style is spectacular. Each level has the look and feel of that 8-bit greatness that you would expect from a spiritual lovechild between Castlevania and… well Castlevania and while you slash your way through the levels you will experience beautiful, animated backgrounds with each level having several sub-levels with their own environment and enemies. Speaking of enemies: They are basically handpicked from every 2D-Platformer with abilities to love and loathe. There are jumping hounds, hammer wielding knights, towering beasts and bats. Yes bats. I hate those guys. I found myself, especially on the big screen, gazing for minutes at the beauty of this game. But graphics isn’t the only thing that will take you to your favorite NES happy place. 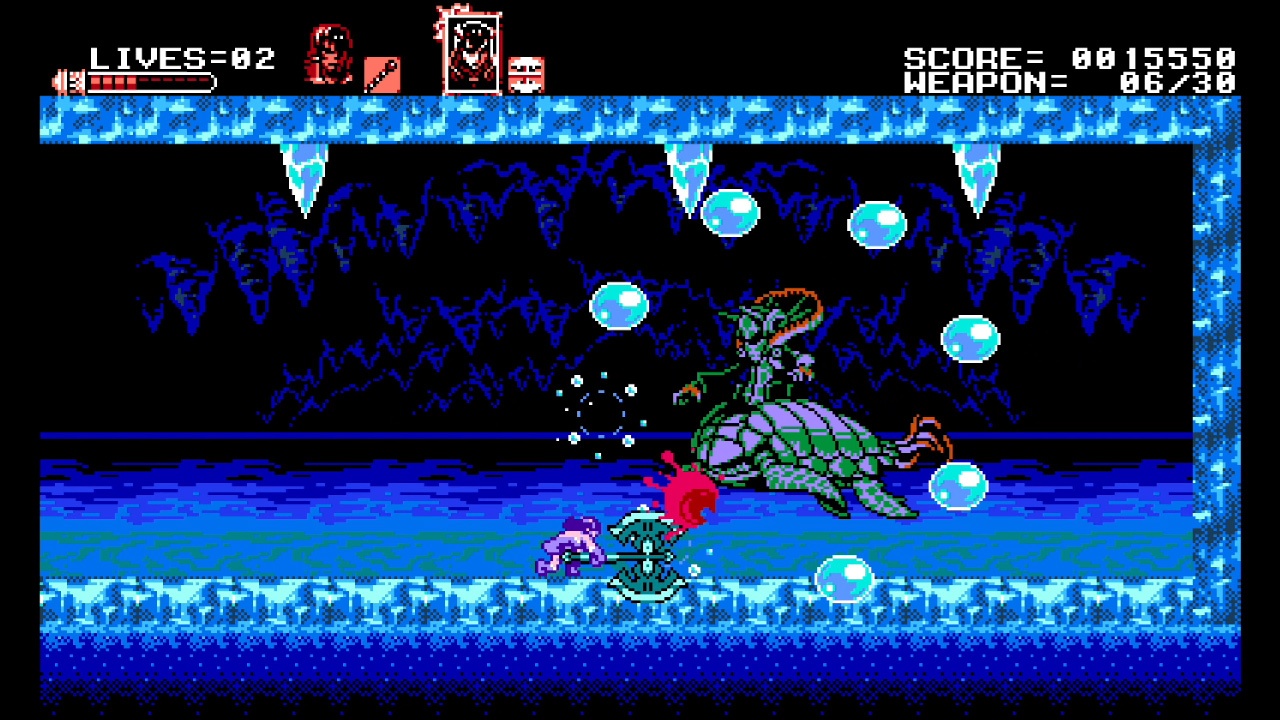 Sound design and music play a big part in Bloodstained’s perception. From the title screen, this game takes you on an acoustic journey that will have your auditory nerves crave more even after the credits run. From slow serenades to hectic battle themes Bloodstained has them all and in great complexity. The sound design is equally fantastic and fits in seamlessly with the rest of the game.

Sure, Bloodstained: Curse of the Moon does serve as somewhat of an appetizer for a different game and therefore its initial campaign length is relatively short with about a couple of hours but, as mentioned before, a plot twist at the end offers high re-playability. However, I feel that Bloodstained stands on its own. The game is just too good to be just regarded a prequel or an add on to a later game. It will find it’s place in between 2018s highly regarded games not just for the fond memories it evokes but also because of impeccable design choices.