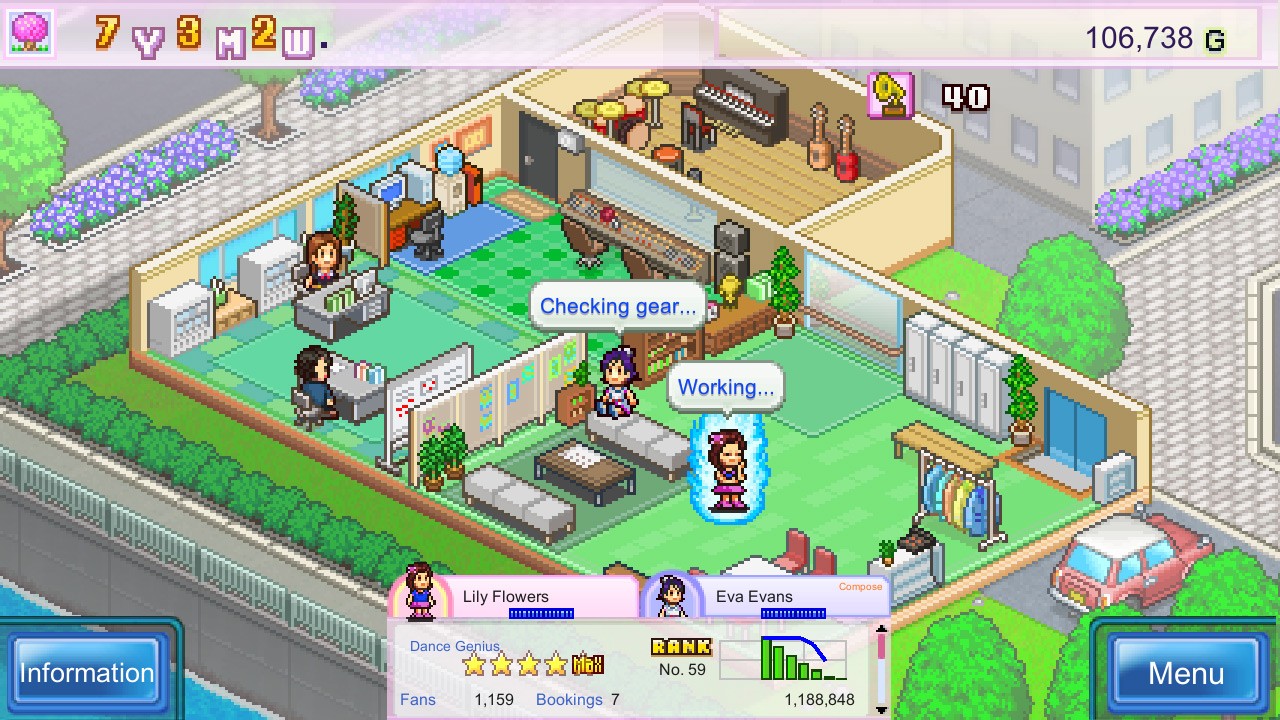 I normally don’t go for simulator games. They don’t challenge my sense of fantasy, and it’s the reason why I play video games. I play video games to escape into a different universe and do things I’m not capable of doing. March to a Million, however, fulfils one of my genie wishes of, “I don’t have any natural talent. What would happen if I managed it?”

March to a Million is a talent agency simulator. You start off as a standard talent agency, but you soon acquire different talented singers to help get your name out there. The usual three archetypes are available, the pop star, the dancer, and the idol. For the sake of this review, I will be focusing on two specific story arcs of two different singers I recruited: Kitty Cat and Kimmy Stiles. I did recruit another singer, Erin Hart, but her role won’t make sense until later in this review.

There are many layers to management in this game. First, you have to level up your singers’ abilities. This will guarantee success at concerts, recording an album, and fighting your way to the top spot on the record charts. The next thing you have to manage is what type of gigs you take on. I learned the hard way that accepting “shady guy’s alley club” gigs are a definite way to lose fans. Fans power your singer to level up their abilities. It also increases the singer’s motivation to continue their career. All of these activities will give you money to upgrade skills or buy stuff, but you make a risk each time you do so.

Speaking of fans, they are divided into different demographics. They range all the way from kids to senior citizens. Certain songs you make will appeal to that demographic, causing you to rack up more points at a concert or when you release a new song. If you can figure out what you want to focus on, gaining fans should complement the success of your singer.

Another thing you have to manage is deciding what record label to go with. There is a cut scene that triggers when you decide on what label to sign up for. Each label has their own rankings, one star being the easiest to sign up and win a spot for, and anything higher than three stars is a challenge. 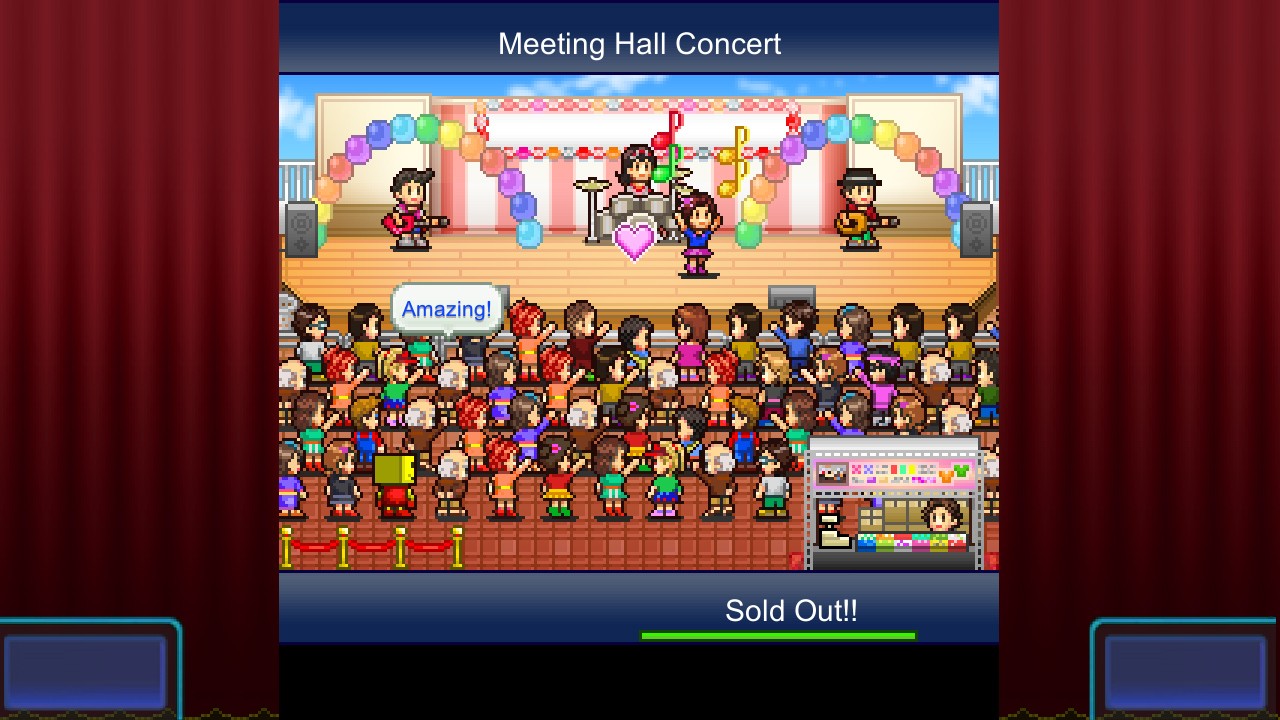 Your singer walks into the selected talent agency for an audition. From there, your singer gives their best effort to appeal to three different judges with random taste. On the left side, is an approval meter that will determine whether you get signed on or not. Your singer will spout out random notes, trying to exceed the meter. If they manage to do this, a bunch of confetti splashes from above their head and you immediately get signed on. If you fail the audition, the judges comically drops a heavy object on you, which seems less of a laugh and more degrading than anything else.

Of course, to make sure that this game wasn’t easily winnable, I had to test the worst case scenario of this mini event. To test this theory, I had my star pop star, Kitty Cat, try her hand at a four star record label. Despite the hefty entry fee of at least five thousand dollars, Kitty Cat didn’t succeed. I also kept in mind that I did land Kitty’s top five songs at least in the top thirty. With the money you earn from record sales and gigs, you are able to upgrade your talent agency office to allow for more equipment, different singers, and even level up the band members.

Something that correlates with the singers is their motivation. The game goes on for twenty years. In this time span, you are expected to expand your talent agency, recruit more singers, get as many concerts and gigs as you can, and lastly fight your way to the top of the record charts as many times as you can. If the motivation of any of your singers drops below a certain bar, they may leave a resignation letter on your desk.

There is a silver lining to the resignation route. Before the motivation meter gets too low, you can choose to retire them. If you go this route, you can stop them from leaving your talent agency altogether, but also leave them available when you compose songs or form a super band with one of the main pop stars your building. Also, if you choose to retire a singer and get a new singer to take over, you can choose to inherit the maxed out skills the previous pop star had. Or you can choose to take on a new one altogether. Regardless, if you decide to do this, you will inherit all the previous singer’s fan base. This is a nice boost to start over again.

This exact thing happened with Kimmy Stiles. She had three to four years of a solid career, but she couldn’t quite eclipse the fame that Kitty Cat acquired. Instead of waiting for an inevitable resignation letter, I had her retire and she joined Kitty Cat’s band.

One of the most important things to accomplish in this game is writing a good song. There are certain traits in the game, such as candid, cute, original, stylish, cool, charming, rocky, and lively that factor into the composition of your song. Without looking at an online guide to see what the perfect combos are, you have to somehow use concept points to level up each of these traits to crank out the perfect song. It can go disastrous and not score you any points on the record chart. Luckily, before you compose a song, it gives you a ranking of different themes from normal, good and bad. Normal ratings yield an average amount of luck to gain popularity, whereas a bad condition will not project to gain any new fans and might even cause you to lose them instead.

Your singers earn concept points from booking different gigs, accepting offers from business owners, putting on concerts, and training your abilities. I would say it’s good to have thirty to forty concept points banked up to write a solid song. Each song you make also has different themes, such as disco, love, vain love, and others. You can level up these songs starting from level one and onward. The highest I’ve been able to get so far is level four, which is great for using at concerts.

Concerts also play an important role in your singer’s career. There are a couple of different venues listed, from a community centre all the way to some stadium that can hold twenty-five thousand people. Your goal is to sell as many tickets as you can. A secondary goal during concerts is to sell merchandise. This ranges from t-shirts to badges. You can restock your merchandise after concerts to keep up with the demand. This also helps your sales and drives up motivation in your singers. 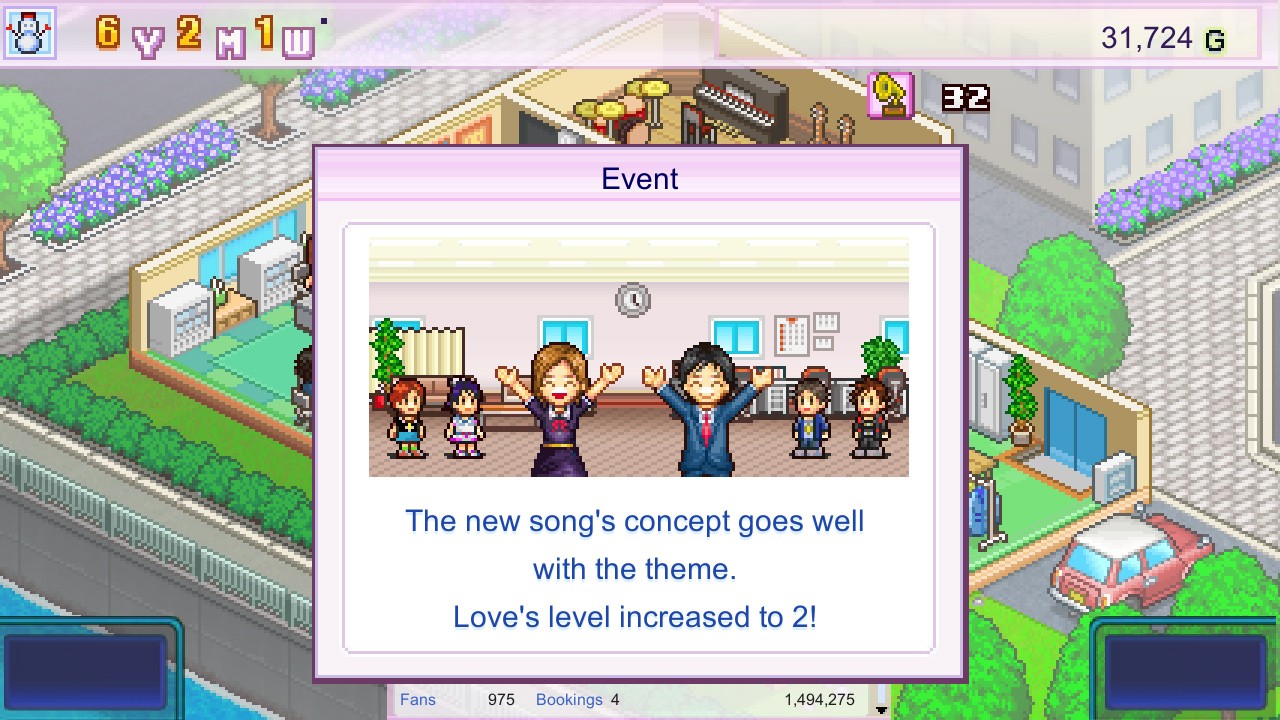 At the core of your singers, is their abilities. They are graded by a couple of different main traits. They are voice, dance, lyrics, pitch, charisma, and composition. A brief gist of all of them is voice factors into the overall presentation of your songs and concerts. Lyrics and pitch are secondary traits that tie into your voice. Without good lyrics, your song won’t catch on with fans. If your skills in pitch aren’t high, it is possible to dissuade fans from attending concerts or losing out to an audition with a record label. Charisma ties into the motivation of your singers. If their charisma is low, they will likely want to retire or leave altogether from your agency. And composition is how put together each song you create is. Without this trait, the rest of your traits will suffer. All of this training costs stamina. You have a limited amount of stamina and every single activity uses this. Concerts, writing a song, or training all use stamina. If you get too low on stamina, your singer will let you know they are tired. If you leave them alone for a while, they will regain their stamina gradually.

Another aspect of the singers is auras. Think of them like physical power ups that help out during specific events.The auras come in a multitude of different colors. The strongest color is the rainbow one, which instead quadruples your bonus concept points or sales during an event. The auras can be triggered during a concert, booking a gig, or writing a song. If used correctly, they can give you that extra boost needed to sell out a concert or land your song in the top five.

March To a Million is the game I never expected to keep me distracted for more than a couple of hours. What kept me drawn in each time is the connection I built with each pop star. The first time I encountered Kimmy Stiles retiring, I couldn’t help but be sad. I had done my best to get her gigs and drive up sales with songs, but things just played out as they did. The only thing I could do is keep building up Kitty Cat and recruit new talent to complement hers, as well as build up a secondary pop star.

This game’s history is interesting. The company mainly focused on simulator games and they all originated on mobile. The game was priced at 5.49 USD and on the Switch, it was about 14.99 USD. During my research, I didn’t notice any differences between the mobile version and Switch version, other than price to buy the game. Otherwise, each version appeared to have the same features. The only other flaw I found in this game was the instructions were limited. Unless I fully wanted to succeed, I would have to resort to the Internet for a guide or two. Because I believe in playing a game on a fresh run, I didn’t do this, but eventually I found a basic guide with tips in the game. They talked about all the concepts explained in this review, but the rest was up to me. I wish the developers would have different difficulty modes for beginners or maybe a “coaching mode” where it guides you to your first successful singer. I can see the other side to this as the game wants you to earn everything on your own.

I’d recommend this game to those that like a good simulator or want to live out their dream of managing a talent agency. Although I can’t vouch for the price on Switch, I recommend waiting for a seasonal sale and pick it up if you can wait.

March to a Million Review

I normally don’t go for simulator games. They don’t challenge my sense of fantasy, and it’s the reason why I play video games. I play video games to escape into a different universe and do things I’m not capable of doing. March to a Million, however, fulfills one of my genie wishes of, “I don’t have any natural talent. What would happen if I managed it?”