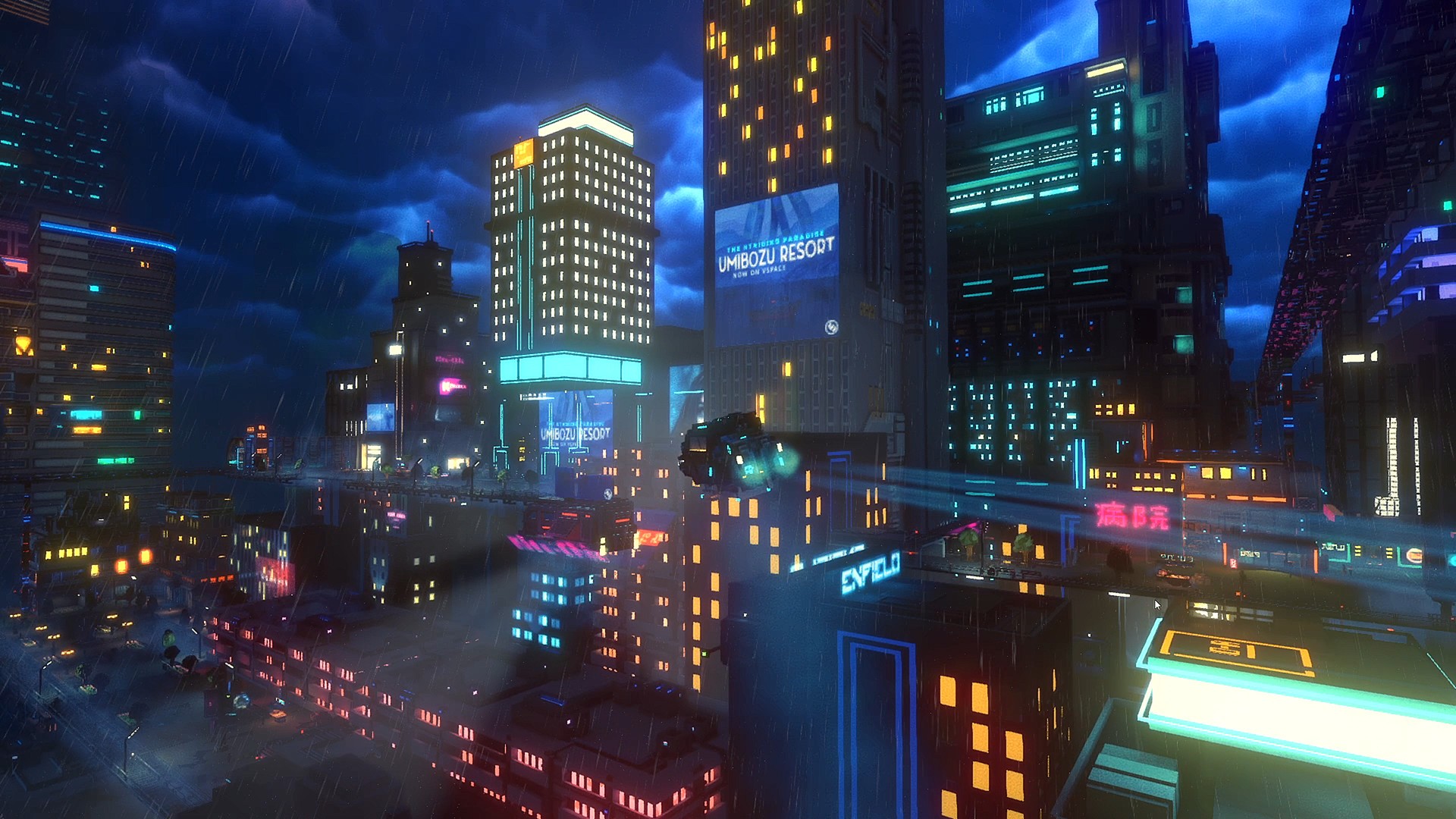 Cloudpunk is a synthwave & retro gamer’s dream. This story-driven, delivery service game, bleeds neon lights and rain soaked nights bringing Bladerunner and Fifth Element to the forefront of everyone’s minds, with its striking, Lego-style voxel graphics presenting a modern twist on the 8-bit resurgence in recent years. As Rania, you have come to the city Nivalis to make some money for yourself as your passion to be a flute player won’t pay enough. Working for Cloudpunk, a delivery company known for its shady clients, you have the simple task, and I’m putting simple in air quotes, of picking up an item and delivering it. Can’t be too difficult can it?

We dive straight in with Rania’s first night on the job, we soon learn a few things about the city and the people within it. It’s dirty, it’s grimy, and the characters range from drug dealers to androids and everything in between; including your trusty sidekick Camus, a dry and somewhat clueless AI that has chosen the form of a dog in digital form. Camus immediately replaces the drab, Siri-like Tomtom in your hover car and accompanies you on your adventures. He questions life, being a dog trapped in car form, and talks to any passengers you may pick up along the way. His interaction with others, both helps and hinders Rania’s plans as he sways the minds of some who are going on a journey both mentally and physically. Stories of the city presented through these characters quickly demonstrate the extreme class division in this dystopian future, including robot racism, megacorporations, and the power of the elite. The majority of deliveries are spent driving through the rain-heavy mid-city, but you also get to see how the super rich live, as you drive high above the clouds to deliver a pizza to a CEO. 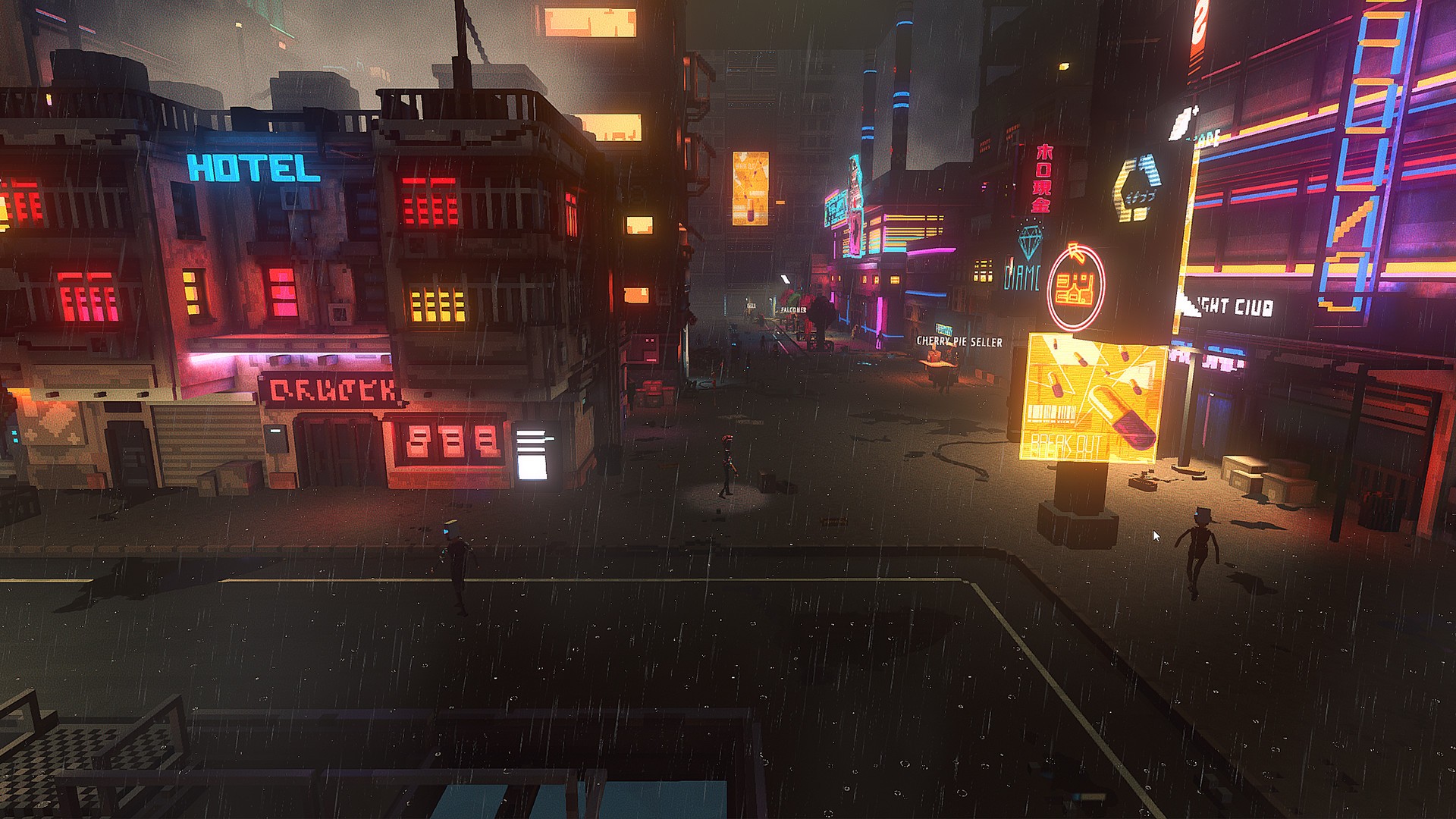 The city landscape is filled with skyscraper tall holographic ads and super highways filled with the rushing traffic of waste disposal units and sky police. The buildings themselves have different styles depending on the area you’re in, and it’s always a great moment when you first encounter a new apartment complex. The music fits perfectly with this neo-future modelling, hitting straight away with some Vangelis-esque Bladerunner intros, and moving into Daft Punk, Tron Legacy dithers. With synthwave gaining heavy momentum at the moment, this ticks all the boxes as the perfect accompaniment to your current playlist.

As you play through, Rania has to make moral decisions that will alter NPC’s lives, but these make little to no difference to your own playthrough. You spend most of your time flying around in your own hover car which you later get to choose yourself with speed boosts and different coloured vapour trails. You have choices such as the classic, boxy yellow taxi, a Delorean-like rectangle lit up with lights, or something similar to the old three-wheelers you’d see pootling down the high street. Consider your car purchase before buying as once you’ve made your decision, you have no option to buy any others. Some of the larger ones for example, offer slower handling, and can be quite a chore to turn corners. Choosing to stick to the roads or not, makes minimal difference, in that, outside of the highways, your car flies a little slower. Driving between buildings and taking in the scenery is certainly the main event for this game, and it’s mostly all open to you right from the start. In a future update there will be a cockpit view giving a whole new angle to the driving experience. They will also be adding in city racing with new characters asking you to scream through traffic so a general knowledge of the layout will be a bonus. 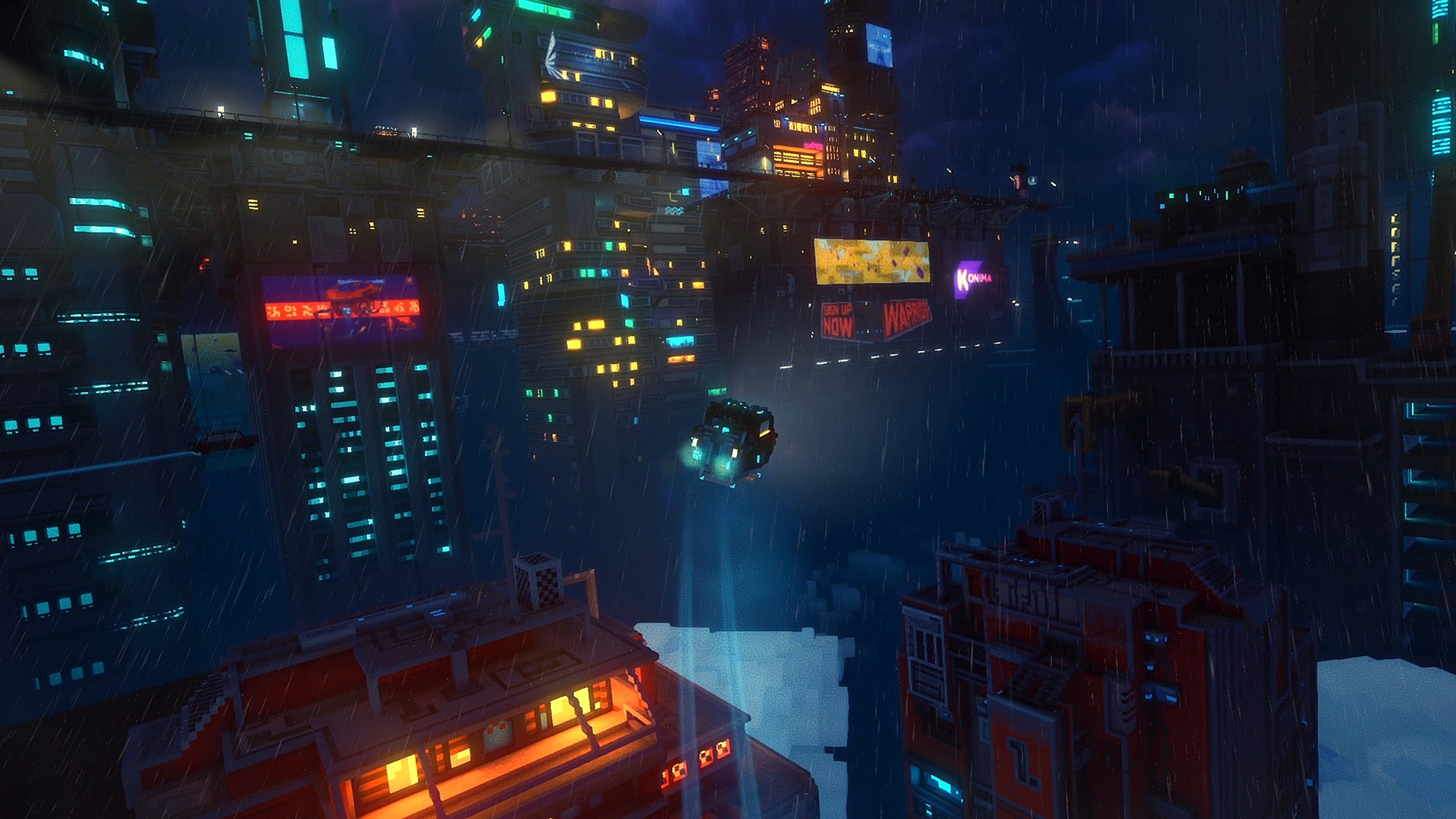 Along with the main storyline, you can also choose to talk to random NPCs along the way who may give you a side quest such as collecting cards. You also have street merchants selling food and supplements, though these have no real purpose for the main game. Rania herself can’t be changed with new clothes, but you can buy additions for her apartment. Although, this also doesn’t have much purpose as you only really need to go there three times in the entire game, and it’s mostly just to listen to more dialogue. The game has been updated to allow a 360 degree view of your character whilst on foot, and will soon include new characters and storylines creating many extra hours of gameplay and giving more incentive to buy now and keep coming back for more.

Overall, this game is very narrative driven, and there are times when you’d rather it be quiet so you can take in your surroundings rather than pushing on with the main story. Your character doesn’t have a health bar, so for those who like the thrill of mortality, it’s simply not that kind of game. As a cyberpunk buffer, Cloudpunk will keep you entertained with breathtaking views, satisfying driving, and a perfectly fitting soundtrack.

Cloudpunk is a synthwave & retro gamer’s dream. This story-driven, delivery service game, bleeds neon lights and rain soaked nights bringing Bladerunner and Fifth Element to the forefront of everyone’s minds, with its striking.