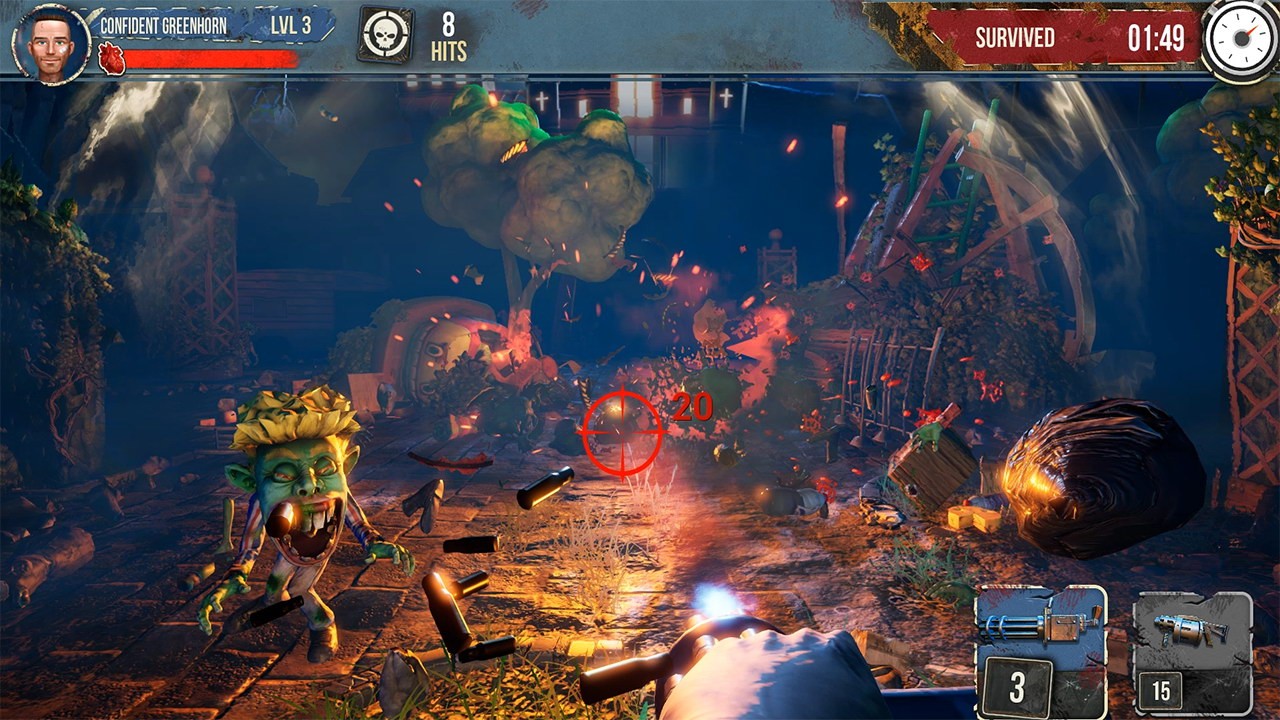 The zombie genre has been done to death – forgive the choice of words, and I, for one, am over it. However, that old spark of death has reignited my interest in killing zombies (again) with this first-person shooter, Dead Z Meat. To offer some clarity, this isn’t an FPS in the style of COD or similar but a static first-person viewpoint where waves of zombies will approach, and you blast them with an on-screen crosshair, using a joy-con.

These sorts of games are great in the arcades and made the transition to home consoles relatively well. House of the Dead 2 on the Dreamcast was a particular highlight, as was Time Crisis on the PlayStation. With widescreen TVs, lightguns don’t work as they did on a 4:3 CRT and with the exception for a few games on the Wii, they’ve died a quick death.

The Switch could do with some of these games as the arguably the joy-cons should be sufficient enough, and in some ways, they do with games on the Switch such as Mad Bullets. Dead Z Meat is a straightforward setup as it isn’t on rails and just one stationary screen populated by a variety of the undead, waiting to be shot. 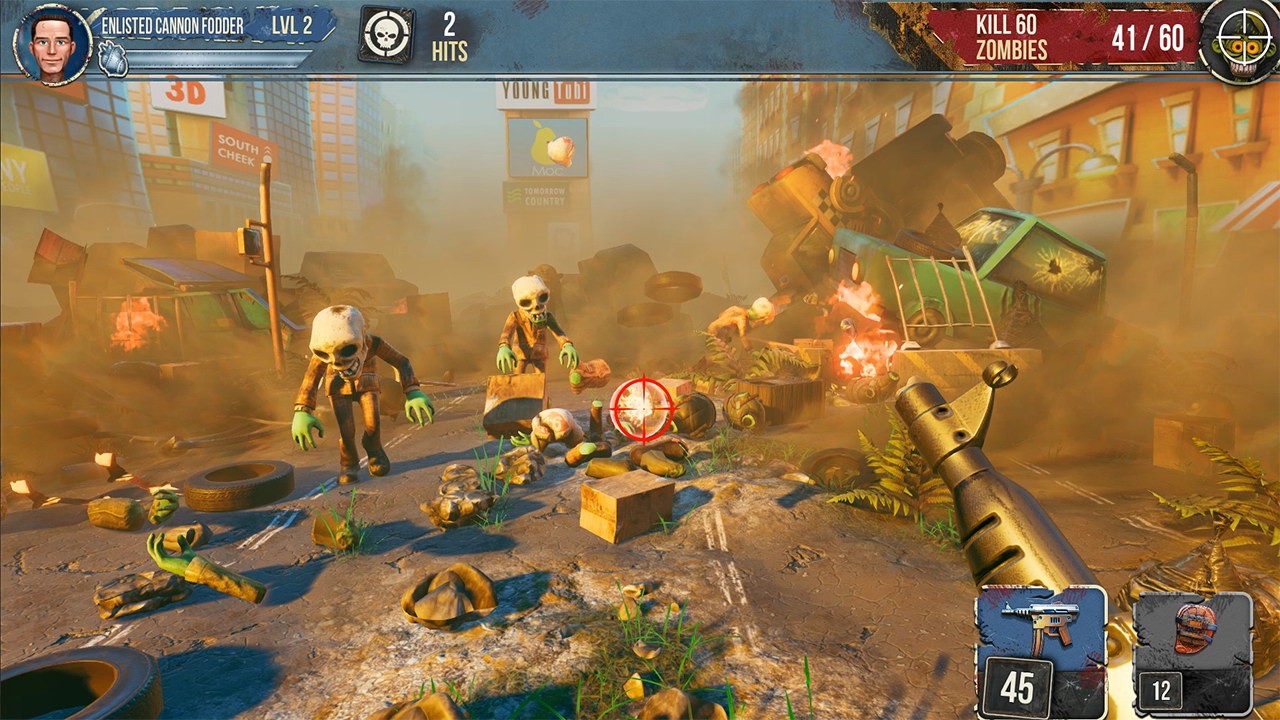 Calibrating the settings for Dead Z Meat was an incredibly swift, but the crosshair was well off. I ended up putting the sensitivity to the max, and despite facing the large screen head-on without any obstructions, the crosshair was shaking like a jelly on a washing machine. It was serviceable, but not enjoyable. By the time I got to a sniper stage, the timing was so atrocious that I was about to give up, but instead, I reduced the sensitivity briefly. Like a Eureka moment, the controls were set and frequently hitting the re-centre button resulted in a fantastic experience.

There’s no real story or anything worth mentioning other than zombies plaguing society, and you have to blast them with your pistol. The visuals are brilliant – I loved their 90s MTV/Mad comics aesthetic as they fumble their way into your space, keen to eat your brains. There’s no reload in the game as it’s automatic, so no shooting off-screen or similar.

The reload speed here is dependent on the weapon you use, and thankfully, you can upgrade the stats. Options include improving the damage, reload speed and ammo capacity using the coins you earn from each mission. At first, you start with the pistol and pending you upgrade it, you can get through a good dozen of levels until reaching the shotgun.

Without a doubt, the shotgun was a game-changer and once again, upgrading made this a go-to weapon that was great at dispersing crowds but also handling the very many bosses in the game. However, Dead Z Meat makes excellent use of the foregrounds and backgrounds and naturally, a shotgun doesn’t have much range, so you’ll either have to wait for enemies to approach or use a different weapon. In this case, you have a secondary weapon you can switch to with a flip of the analogue stick which complements your close-quarters weapon, or bombs strapped to meat options. Yeah, there are those too. 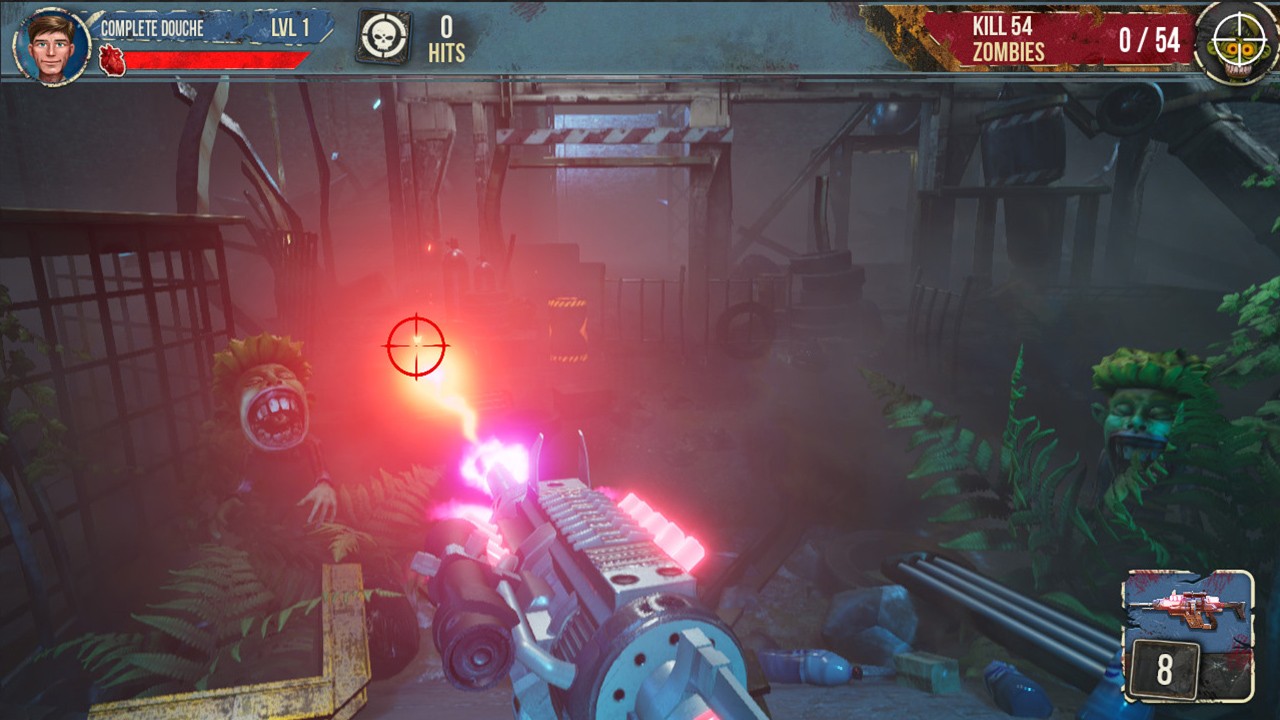 A world map is displayed between waves which shows hexagon-like tiles that you can hop to after completing each wave. The rest of the map is covered in fog, but as you progress, more of the map is revealed. It’s good to know that you don’t have to do every single stage, but it’s recommended for levelling up, but more importantly, for the sheer fun of it. Not that Dead Z Meat has much competition, but this has been the best experience in this sort of game, and if you miss the glory days of the arcades or perhaps being able to play a Time Crisis-like shooter, then Dead Z Meat is a game worth considering.

One thing worth noting is this is a single-player experience, unlike Mad Bullets. This was a minor disappoint as it’s easily one of the best games in the category and would have been great to share with someone else. I found this out the hard way in that I was rapidly pressing the buttons on the other joy-con only to look up the title to see that a second player wasn’t an option, which is a shame. Additionally, there were no other modes, but the game makes up for that with the variety of stages – survival until time runs out, destroy many enemies, protect a cure or kill the boss et al. Top that with the upgrades, and Dead Z Meat has heaps of longevity, despite being a solo affair.

Dead Z Meat is an excellent throwback to the first-person perspective shooters from the arcades and works surprisingly well on the Nintendo Switch. If only there were a two-player option, this would be even better.