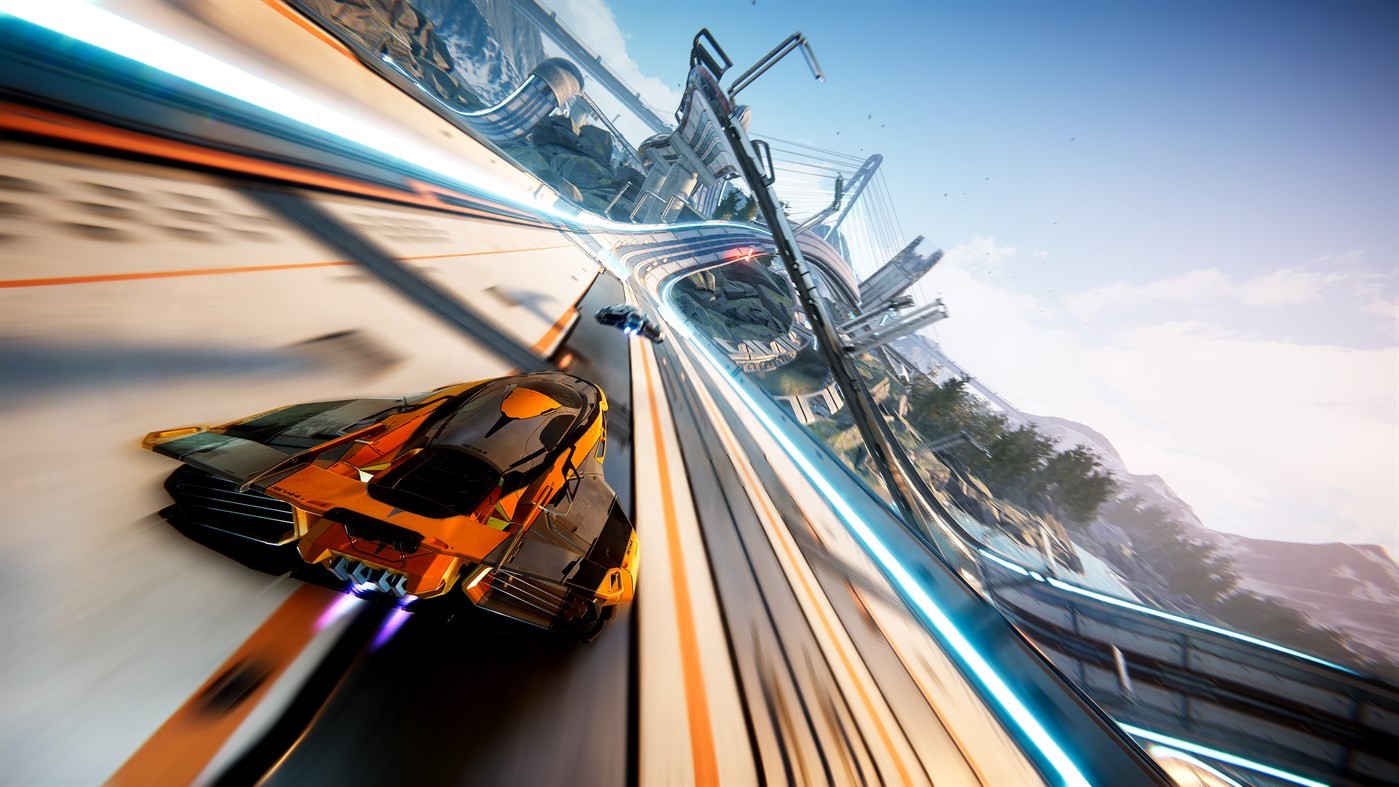 Admittedly, I’m jealous of some of the Playstation 4 exclusives that they kick out and the Wipeout series is one of them. It was a unique racing game that made its own mark back in the 90’s and was one of those games that the majority of players owned when they first purchased the original Playstation. As far as I’m aware, nothing has come close to Wipeout on the Xbox One, so I was eager to see what Antigraviator had in store as when I observed the screenshots as I could see a glimpse of similarities.

Antigraviator is developed by Cybernetic Walrus, probably the most radical name I’ve heard for a developer. Published by Iceberg Interactive, the game is best described as an anti-gravity racing game. It’s important to note that Antigraviator isn’t a new title by any means and is almost two years old, as it launched originally on PC way back in June 2018. The development team is composed of alumni of Howest University in Belgium; so it is worth bearing in mind that this could be a first outing in the video game world. It’s refreshing to see so many new indie developers delving into not only the gaming world, but expanding from PC onto consoles as well.

Antigraviator is set in the year 2210 which doesn’t sound too far away in the grand scheme of things, and racing has evolved far beyond its expected limits. New terra-forming capabilities paired with scientific breakthroughs in the field of anti-gravity have birthed a new spectacle known as the Antigraviator tournament. There are three specific gameplay modes in Antigraviator which are Campaign, Quick Race or Online Multiplayer. Players can play locally in split-screen or head online and play with friends or randoms across the world. The game weighed in at around 8gb upon installation on Xbox One X, so it won’t be too heavy on your hard drive. 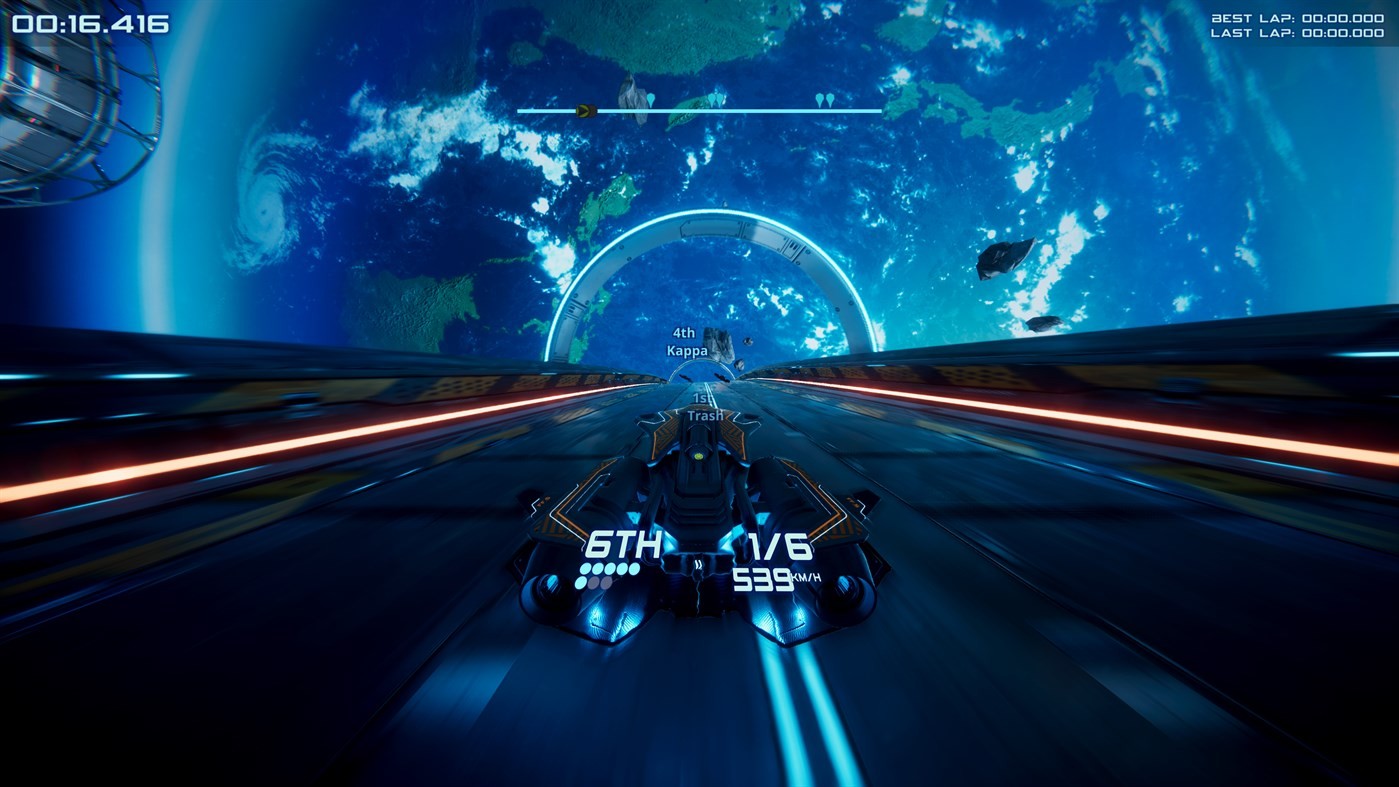 Before I was ready to tackle real life people I decided to start my anti-gravity episode in the Campaign mode. There is a short tutorial which wasn’t really warranted because the control scheme is extremely simple and I found myself just using analog sticks and my trigger for acceleration. Pretty standard analogy for any racing game really. What will stand out to you at first play is how fast this game is. We are talking ultra fast and faster than any Wipeout game I’ve played. Even though you are accelerating at crazy speeds the handling and navigation of the spacecraft is simple.

The spacecraft appear to be fluid with movement, but what I did find at first was that I struggled to be consistent. And what I mean by consistent is because I was progressing so quickly around the track I’d be hitting the walls. Hitting these walls however didn’t appear to slow me down a great deal and I could just carry on. There is the ability to brake and also do barrel rolls which comes in handy during races to dodge enemy players or obstacles around the course. Recalling previous games like Wipeout and other attempts in this particular genre, this was definitely the easiest game I can remember to adjust to.

There are different aspects in Antigraviator though in comparison to other titles in the genre. For example, in Wipeout the objective was to do a certain amount of laps and attempt to win the race. During the course of the race you had power ups to use to try and throw the competitors off course. Pretty much like a futuristic Mario Kart. Here in Antigraviator though, there is a feature called “traps”. It took me a few races to figure out what was actually going on here as there didn’t seem to be any inclination of explanation of how this all worked. At the top of the screen there is a bar to show progression along the course of the race. There are symbols on this line that will indicate when a “trap zone” is approaching. It is here that you’ll have a small limited amount of time to activate these traps which could range from mines, missiles and even environmental hazards to try and trip those up going almost at the speed of light. 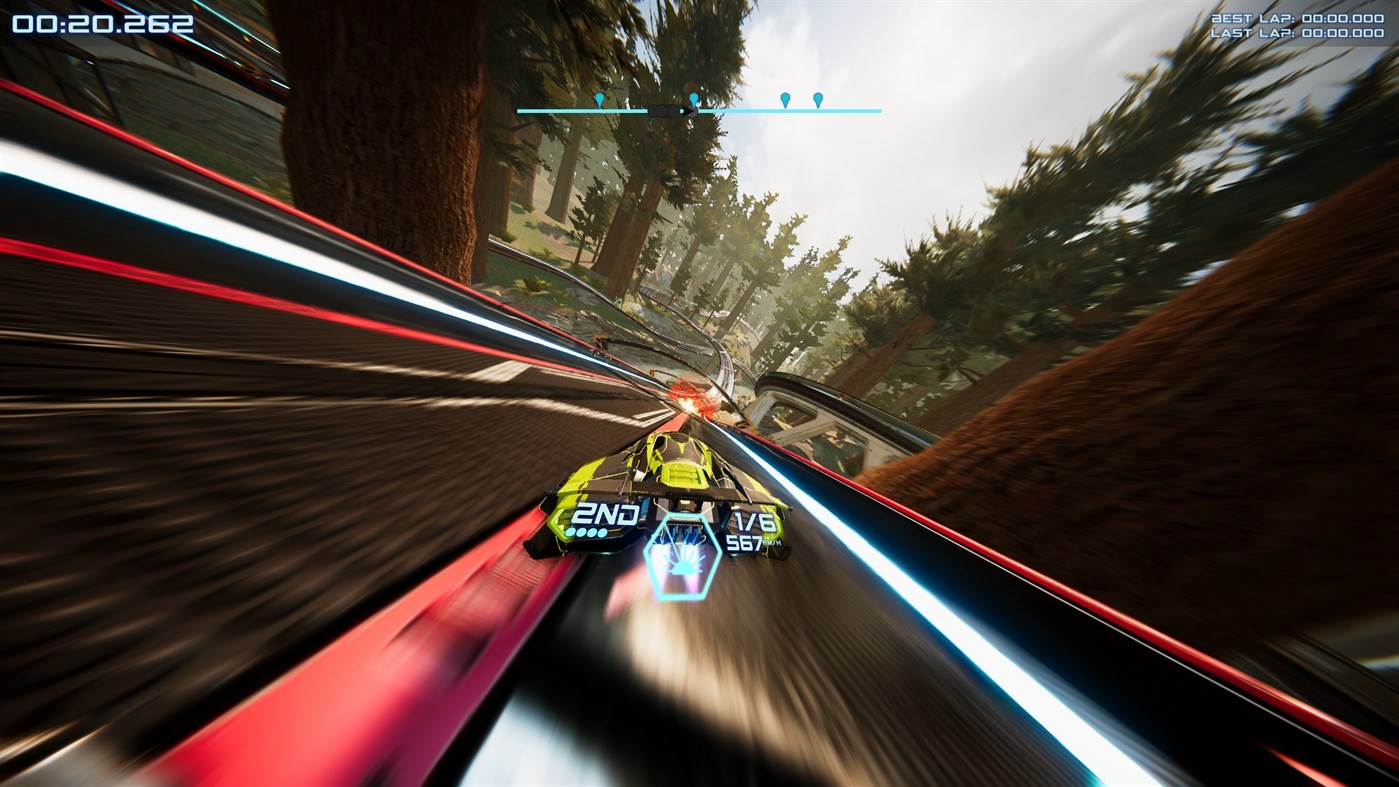 Whilst this all sounds fantastic, I didn’t feel like it was particularly exciting or blended into the experience very well. It kind of made parts of the race a bit frustrating as you’re attempting to catch up who is ahead of you but the only tool you have is to wait for the trap zone, which appeared to always be in the same areas of the course. The “traps” aren’t like a pick up like when you drive over power-ups in Wipeout or crates in Mario Kart. Another annoyance was that it seems like you can only activate once per lap and if another opponent takes the opportunity then you then lose out on that moment. I found upon progression on the Campaign it became more common and frequent towards the endgame when the difficulty seemed to ramp up.

There are small pick ups that almost look like batteries as you hover around and it also took me some time to figure up that this was power to activate the traps themselves. Each time you activate a trap it exhausts this energy and you will then have to attempt to build it up again. It all became a bit repetitive and mundane. If you activate a trap you are immune from being destructed yourself and you’ll have a green indicator when you land a successful hit. You do have to utilise the energy you accrue wisely though as you can also spend this on boosting your speed as you try and keep first place in your glance. I did find the speed you could travel at very satisfying and there is plenty of variety in the different tracks themselves.

Campaign mode sets you off in four races against AI bots as an eight player race. The four races finish and then if you have finished at the top of the scoreboard you’ll win a cup for that particular tournament then move onto the next. They do try and mix it up a bit with the racing styles where you have your standard race, deathrace and countdown. Standard race is self explanatory and its a case of completing the laps and hopefully coming home with the gold. Deathrace expects you to keep going and try and survive the experience without being destructed. Countdown is a little like Outrun in the fact that it’s a timed checkpoint mode which adds seconds onto the clock every time you pass through one.

There appears to be 15 tracks on Antigraviator across 6 different locations and these can be reverse directional as well. This is much more than I was expecting in terms of content here so this was pleasing however the campaign was fairly short and not much of a challenge really. There are unlockables and these are achieved with the currency you earn. You can buy new ships, decals and even parts but it won’t take you long to unlock these either as there is currently only three ships in the game. It isn’t the be all and end all that there isn’t much here but some more customisation would have added some great features to the game.

All in all Antigraviator isn’t a bad game at all but it isn’t particularly exciting either. Sure it follows the mechanics of games such as Wipeout but you never feel completely in control of your craft, its surroundings and what you can do. I feel as if the powerups were similar to games like Mario Kart, Crash Team Racing and Wipeout where you could shoot and drop items it would be more enjoyable. The addition of online multiplayer will add to longevity but I struggled to find online players at the start of its life so unfortunately did not get to try this feature out. If you’re a fan of the genre then it maybe worth it to you, but for the price point it may be worth waiting for a drop.

Antigraviator is an exhilarating racer that is short lived in excitement but may instantly appeal to fans of the genre.