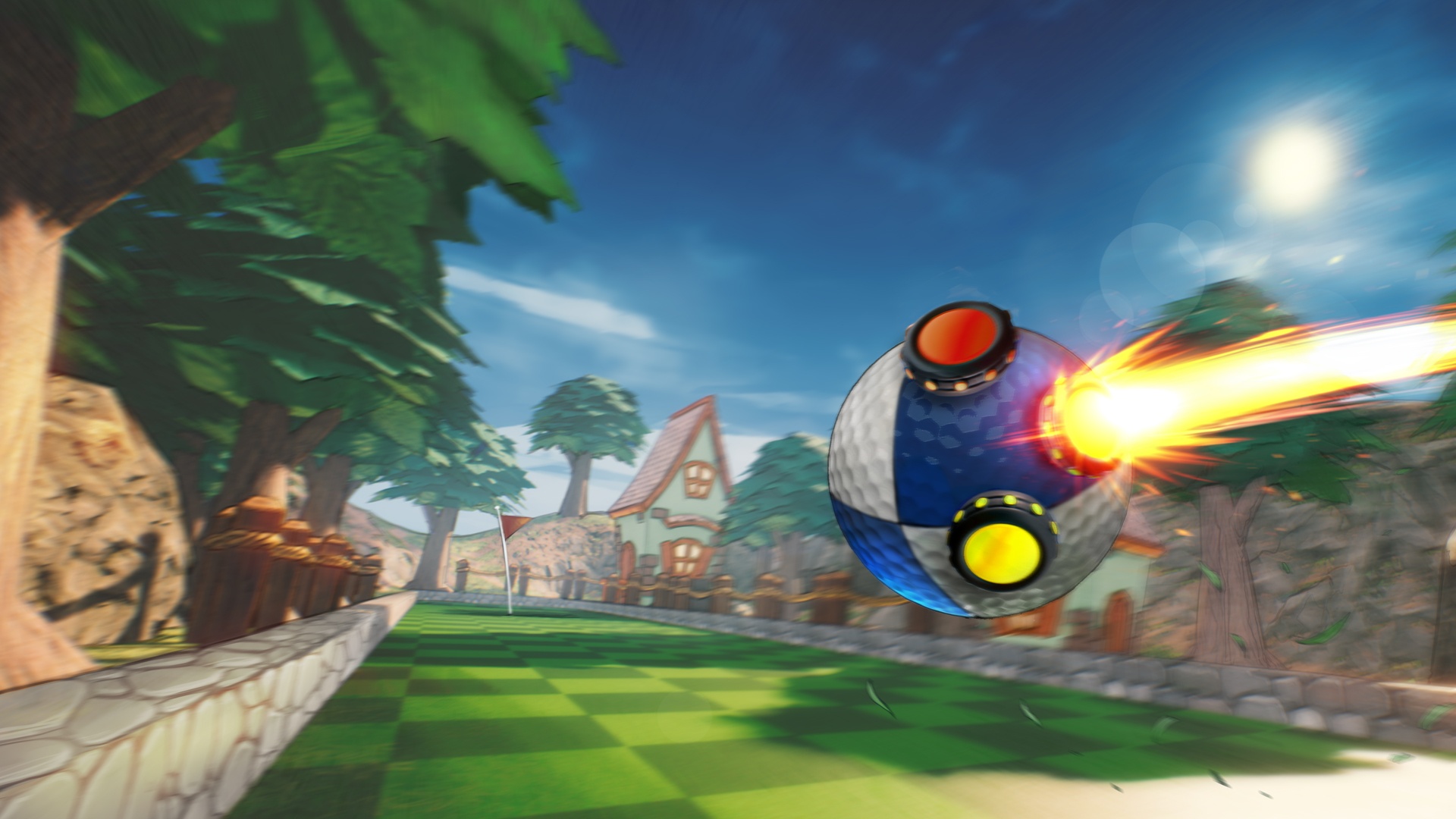 Everything is supposed to be better with explosives. When you add a bunch of pyrotechnics to a scene, moment or reveal, it can give that finesse that tells people they should be excited or terrified by something. Hell, one of the reasons that Vlambeer’s classic Ridiculous Fishing works so well is because the idea of dynamite fishing is a real thing, and they just went the extra mile. In addition, being able to make everything seem like Michael Bay directed it adds a level of giddy pleasure that taps into something primal in your brain. Probably why July 4th is so freaking popular. But the point of the explosions is to add something to the moment, not take away from it. That’s the balance that 34BigThings attempted to find with the Nintendo Switch port of Super Inefficient Golf. And, sadly, the explosions were slightly marred by the sheer technical errors of the game.

Super Inefficient Golf is a mini-golf inspired game that uses a somewhat unorthodox approach to the sport. Sure, you have a bunch of holes on smaller greens, and you want to get the ball into the hole by way of clever curves, strange obstacles and, in this case, physics and logic defying layout. But you’re not swinging putters or even larger clubs: you’re setting of a series of remote mines to detonate your indestructible, beach-ball sized sphere and propel it, screaming, towards the goal. You have four different colors of mines (each tethered to one of the four primary buttons) and you can add one to four mines of said color anywhere to trigger different amounts of propulsion and torque. Figure out how to use the fewest number of mines over the fewest number of strokes in order to reach your goal, and, by God, you’ll be an explosive golf champion!

Right out of the gate, there’s one small sadness to state: Super Inefficient Golf is totally single player. Mini golf is a fun game on it’s own, sure, I’m not gonna try and say otherwise. But most people have fond memories of either hitting the windmills with friends (sober or otherwise), or taking a special someone to the Putt Putt and having them show you the proper way to shoot. Or, in my case, getting totally schooled by my future wife during 18 holes of pirate-themed fun, but I digress. It’s clear that the game would take an extraordinary amount of time with a multiplayer layout, but it’s not like there would be any more or less cheating then there would in normal golf games. Set mines, explode, copy your friends if it looks like their strategy will work better, have some laughs and continue on. You can probably do that with just everyone suggesting ideas on a single ball, but that’s neither here nor there. 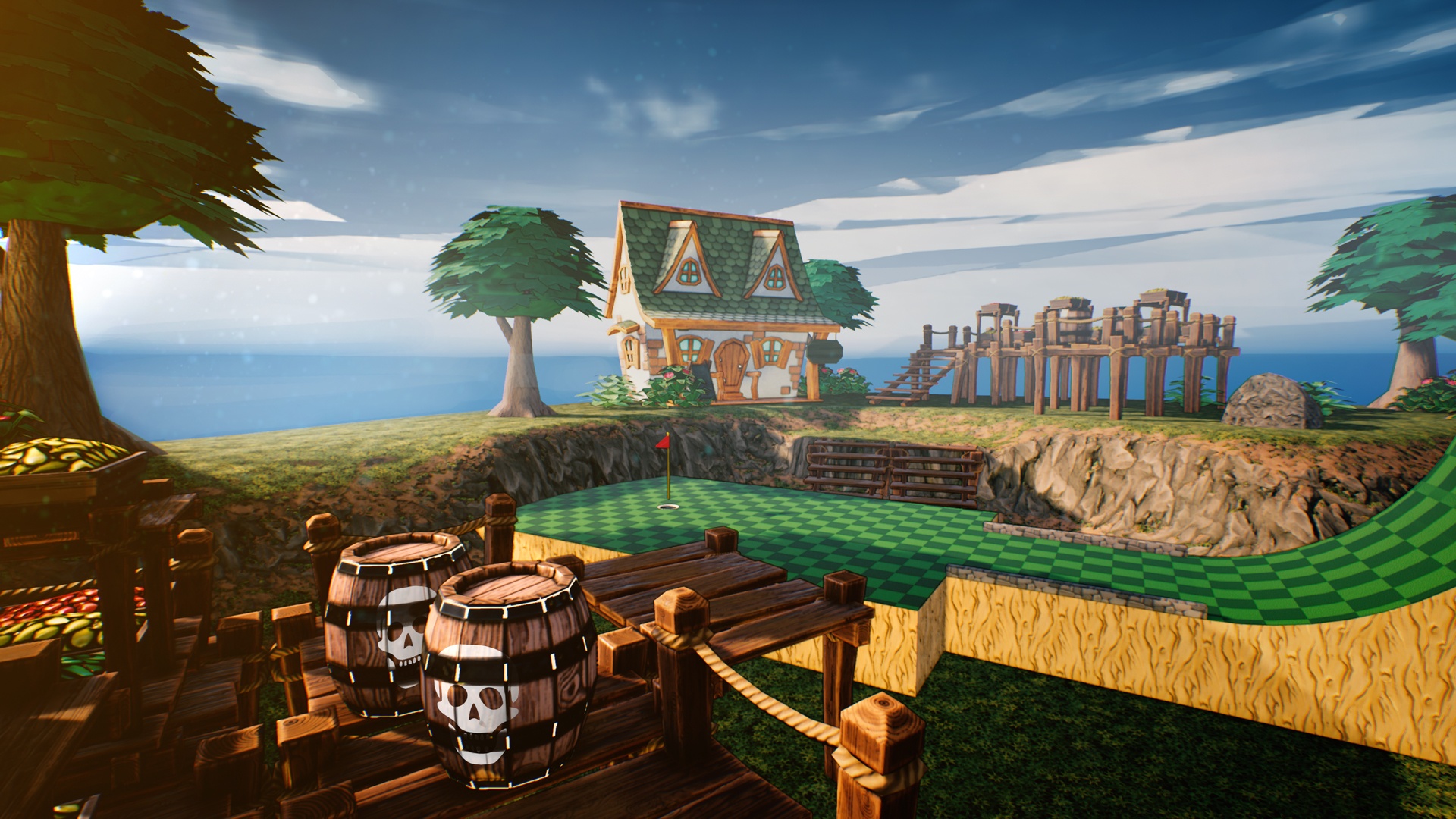 So not a group game, fair enough. Super Inefficient Golf still has a lot of potential in terms of execution and interest, and this is where things get pretty interesting. There are three distinct gameplay plans to success: the scientist, the opportunist, or the madman. The scientist is going to be the person who understands the physics of the game right away and knows how many mines to lay down and when to fire them. This person is going to really grasp the spin of the ball and when they can and should fire off counter mines to stop a singular path, or to create a new one. They might even show off and purposely make it look like their ball is going to head out-of-bounds before they stop it in mid-flight and nail a Birdie. This guy is going to champion the game, and good for him. The Opportunist doesn’t care about the number of strokes, they’re just going to get to the hole as safely as possible, and this person is just playing for the sake of playing. No worries there, Opportunist, but you’ll never get a high score at this rate, as you do get bonuses for leftover mines and number of turns.

The Madman is going to try bold and excessive sets without any real reason for it, and this is the methodology that I adopted pretty early on. Since the levels are all pretty bland in comparison to other golf games, I wasn’t here to drink in the scenery. I was here to impress myself by guesstimating where the hell I should put mines and, in all cases, I put as many as I could, every single chance I got. The result was constantly, consistently launching myself way outside of where I should be, laughing, and resetting, or getting a hole in one against ALL odds and being astounded with my good fortune. The game is fun, don’t get me wrong, but it’s one of those titles where wacky and stupid results make it even better. Still, I bet that, were I going against other people, I’d need to tamper it down just a tad to avoid losing by a massive margin.

The end result of Super Inefficient Golf is a solo exploration of just what you want to do to find a balance between amusement and actual skill and attempts. On the one hand, since the ball never explodes and very little of the landscape is affected by collisions, you don’t really get to explode things and go totally off the rails a la Grand Theft Auto or something. You really need to stick to the idea of the golf mechanism and what you want to accomplish in terms of score. On the other hand, it’s definitely not like a traditional golf game, so, when you need to nail a surprisingly difficult shot, it’s not a matter of skill and precision with your sand wedge or whatever. It’s being able to understand different chain reactions of the explosions and how they will affect the ball plus whatever else is affecting the ball. There’s this great course where your ball has, with some luck, the potential to be carried all the way to the hole by giant fans if you use the right amount of force and coordination. Failure to do so drops your ball far, far away, leaving you to essentially work out explosive stages to make your way back to the green. It’s interesting, to be certain. 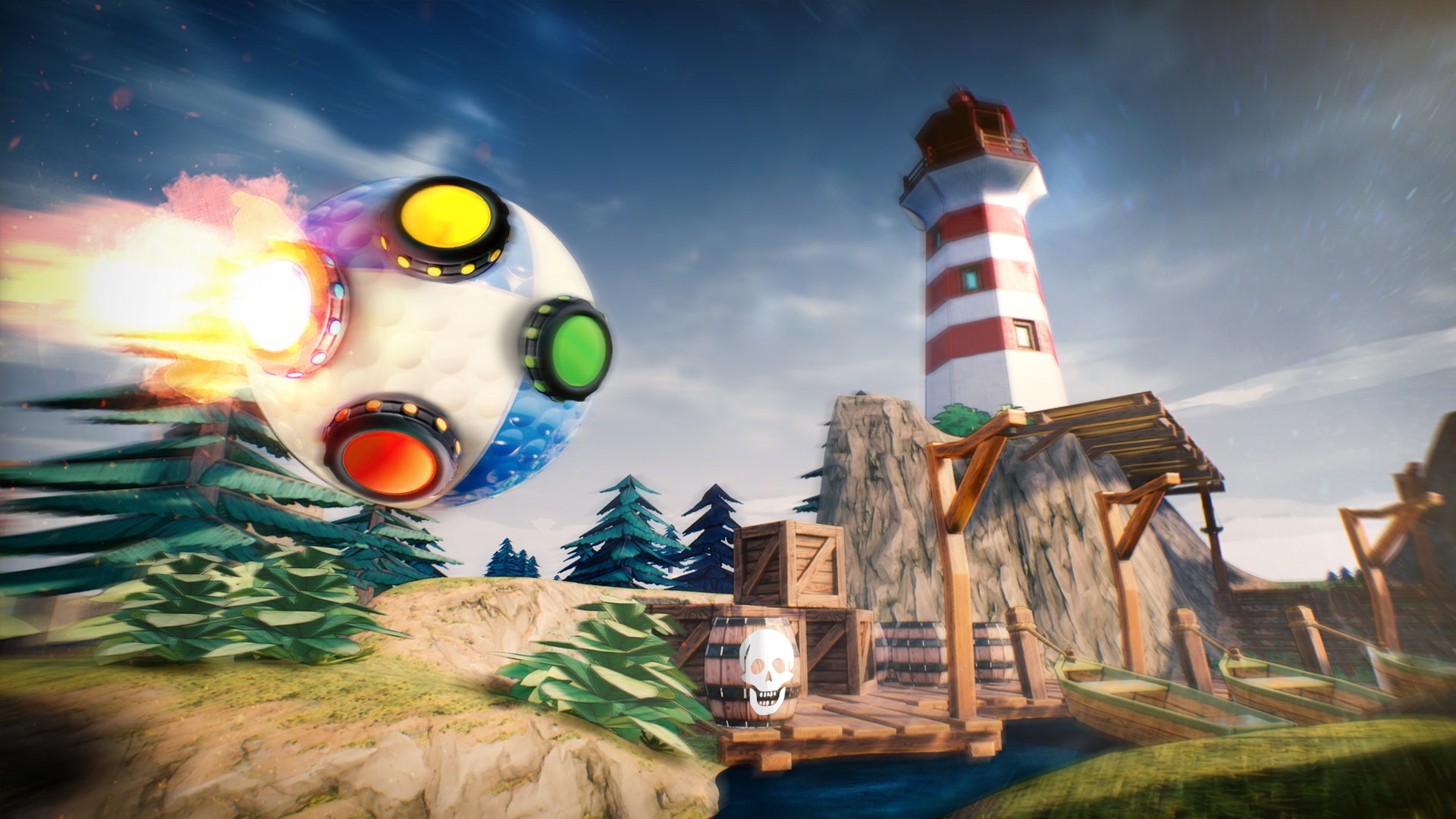 But the actual execution of Super Inefficient Golf on the Switch is what ultimately impairs it from truly taking off. Firstly, the angles of the camera get incredibly disorienting when trying to figure out where you want to go and what you want to do. The auto adjust doesn’t always swing back around to where you’d like it to be when the first mines detonate, so you’ll be confused as to whether you want to trigger the X or A mines, and the difference is making it to the hole or blowing yourself up and over the ridge over yonder. This technical issue can be solved with a lot of extra time spent after moving from “mine placement” mode to “explosion” mode, and being sure you’re looking exactly where you want to and where you THINK you’ll want to.

The final weight on the scale of my score is the constant, nagging, incessant attempts to check for Internet connection to upload scores. The reason I enjoy the Nintendo Switch is that it’s a mobile console: I can take good games with me on the go, which often means on the train or the subway so I can play in peace before I get to the office and slowly lose my mind. Instead of being able to sink into a game of tactical mines and demolitions expertise, I’m punished every time I finish a hole by being reminded that I’m not online and I can’t upload my scores. It’s a solo player frigging game, and I seriously don’t care about the feats of others. Even if I did, I’d prefer it was optional, but Super Inefficient Golf doesn’t have a toggle for that anywhere in their very sparse options menu. You can adjust volumes for music and SFX, and you can invert the joysticks, and that’s it. Meanwhile, I’m going to hurl my Switch across the Red Line because the game doesn’t understand that, no, I don’t really have access to any wifi points when I’m near Packard’s Corner, and, even if I did, I don’t need to show everyone it took me eight rounds to do a par 3.

There’s some good and interesting points to Super Inefficient Golf. It’s novel, it’s fairly well executed, and it’s a nice breakup from the monotony of traditional golf games (you know, besides Golf Story). On the other hand, it’s relatively short, has no multiplayer, and the Internet nags will be the death of me. If you’re really pressed to decide if this is the game for you, then maybe you should jump on in and give it a shot. But if any of the things that I’ve just mentioned are a big turnoff, just let this game sail on by until the next explosion rights its course.

It seems this game was destined to be a product of its own naming, as the technical problems outweigh the fun of explosive mini golf.