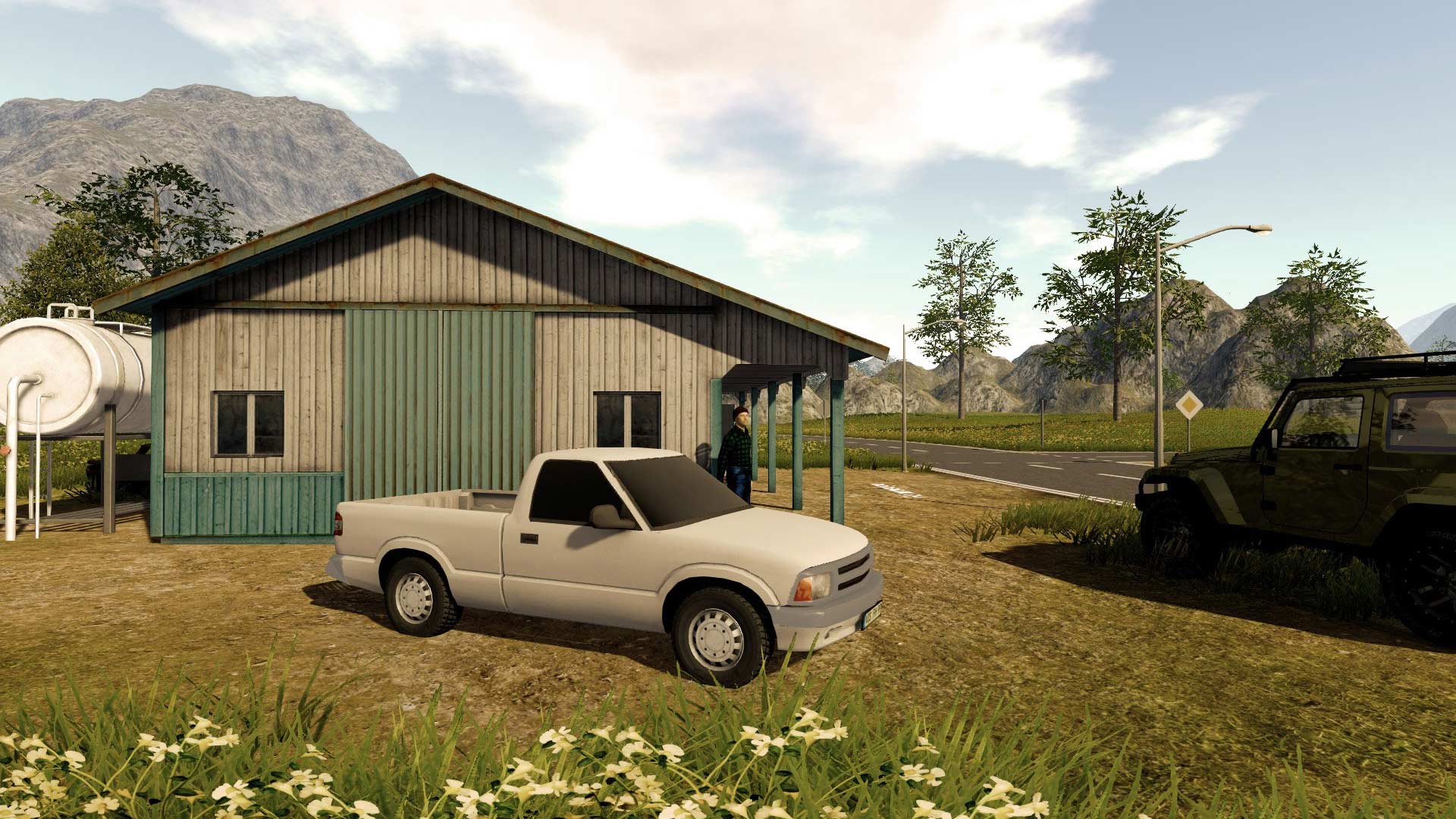 The developers of this game are trying to con you. Seeing the rise in simulation games over the years, Join Dots and Silentfuture have cobbled together a crude and unfinished program, slapped on a font similar to the popular Farm Simulator series and made it available in the hopes you’ll part with thirty-five pounds. If you have an unopened copy of this game sitting around, take it back for a refund, immediately. This is a complete shambles and whoever made it should be ashamed of themselves. I should have followed my instincts and turned it off after the first ten minutes, but instead I actually sat and played through this game for hours so I could give a complete review of this shameless cash grab.

Upon starting the game, alarm bells immediately started ringing when I opened the options menu to find only four choices, none of them being the option to invert my aim. Nevertheless, I awkwardly managed to position the camera to have a look around only to find myself in the middle of a bland looking town, that would look more at home on the ps2. The trees are spindly poles covered in absurd 2D branches that look far better in the screenshots above then they do in the game, and the rest of the town is an ugly assortment of boxes scattered together in an area completely devoid of life, save you and your horse. 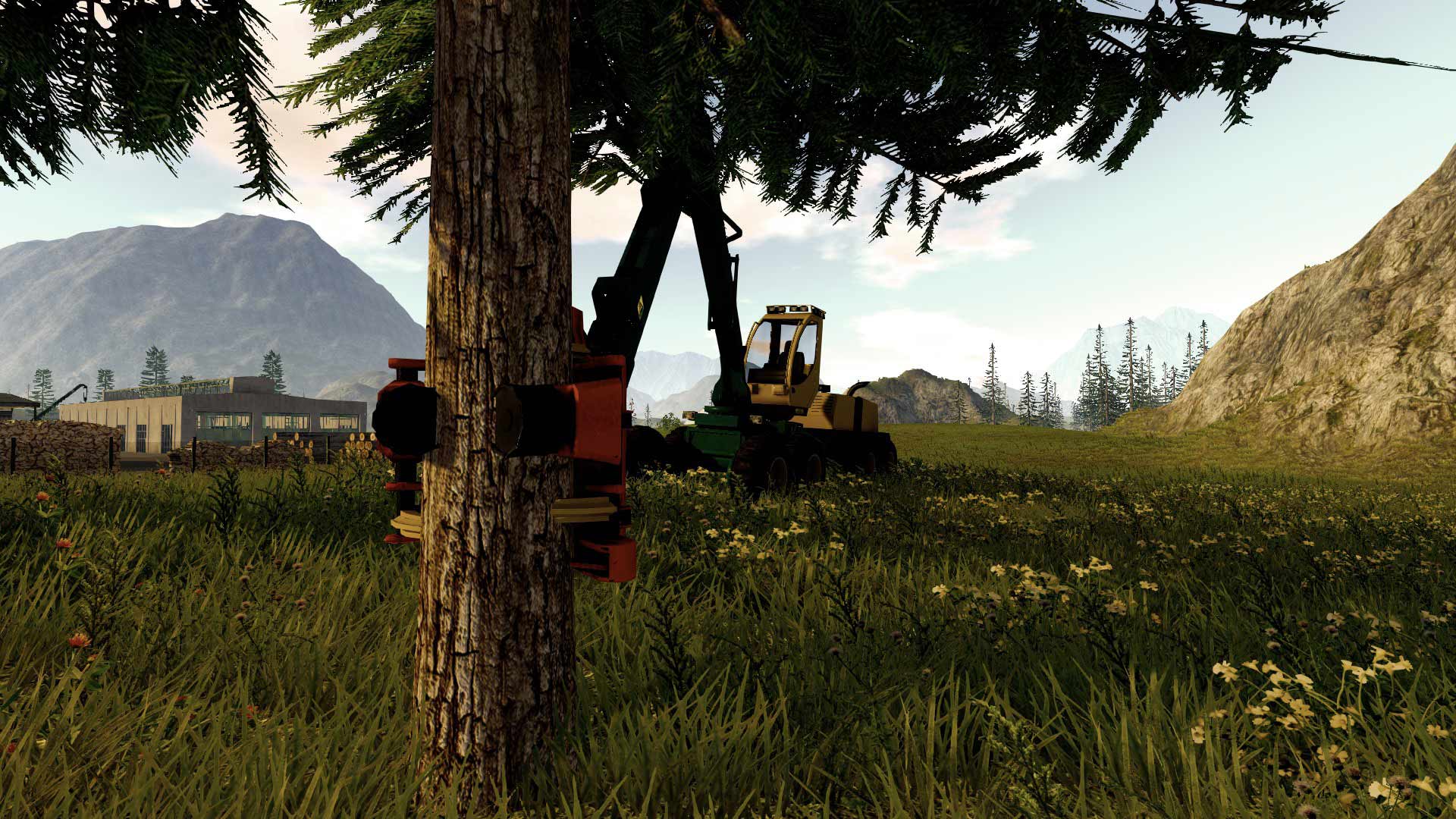 The game gave no indication of any goals or objectives, but all of the controls are displayed down the right hand side of the screen at all times, so finding my chainsaw was no problem. I grabbed my trusty logging-steed and made way for the nearest tree, and was appalled once again by just how ugly the game looked and felt. Cutting the trees down is done by rotating the chainsaw and holding either shoulder buttons to ‘saws’ (the games exact wording) until the saw cuts through the tree in a shower of extremely unrealistic looking wood chips. After dragging a few trees to the lumber mill I levelled up, and was allowed to invest some skill points in certain aspects of my character, such as earning more from sales. After cutting down several trees, night fell swiftly upon the ghost town I inhabited and the game became even worse, as the darkness of the night reduced my screen to an almost pitch black assortment of jagged lines and boxes.

At some point the game introduced me to buildings I could buy to make my operation more efficient, such as an office that allowed me to hire and fire staff, and a garage to purchase better logging equipment. I had to grow my character to level 10 to acquire all the buildings, and it took me less than five hours to unlock everything in the game and have 1.5 million credits in the bank. The only thing I was unable to unlock was a ps4 trophy that must be bugged, because the network shows o.o% of people who play this game having unlocked it. 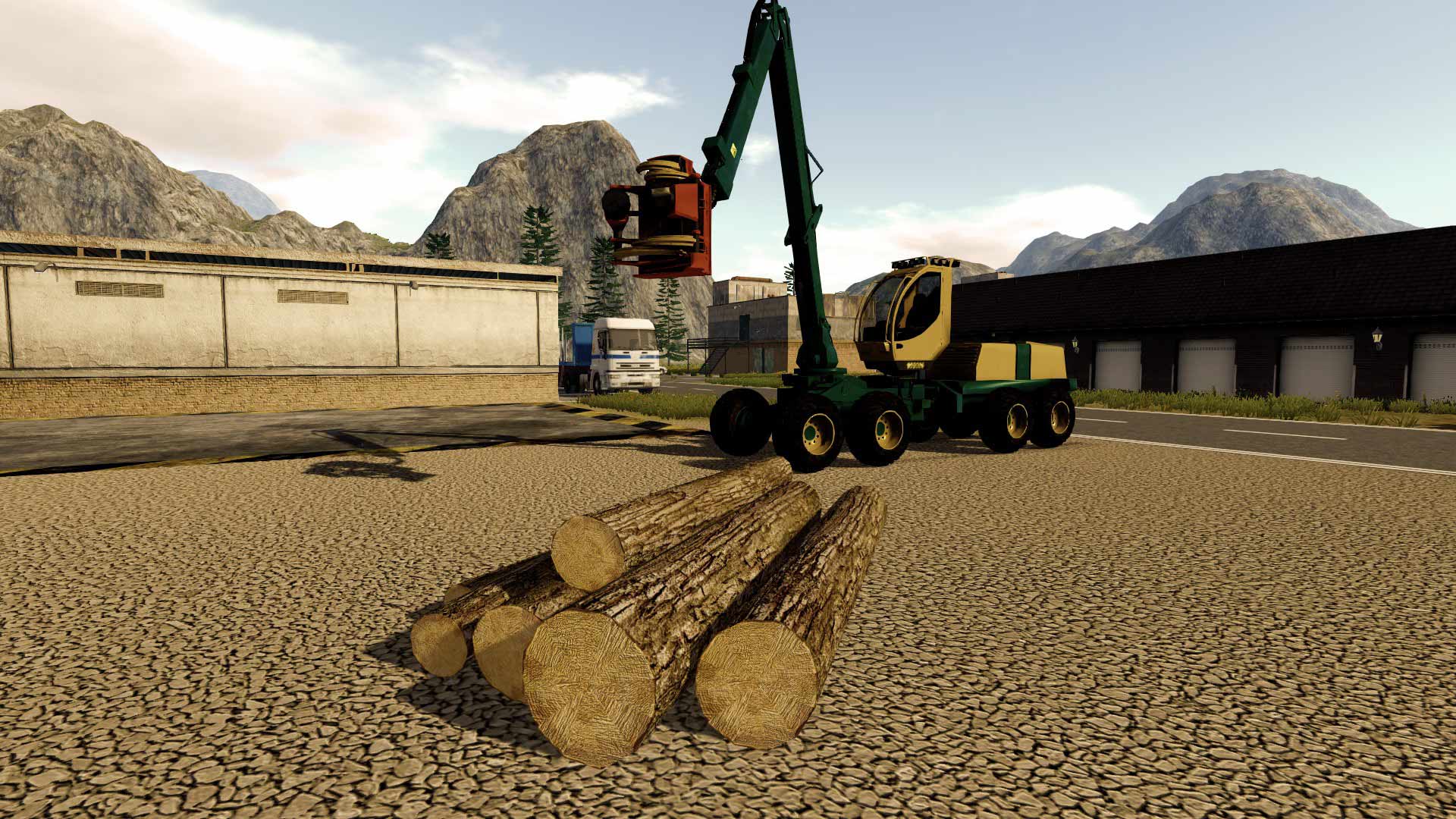 The equipment you can buy doesn’t make the game any more fun and looks just as bad as the environment. Expect textureless and generic kit that handles like crap and is awkward and frustrating to use. Using the machinery pictured above will also require a crane to pick the logs up with, and a flatbed lorry to transport them, and each piece of equipment will randomly get caught on invisible objects or even float magically into the sky as the game confuses itself to the point of becoming unplayable. The sound design is also absolutely terrible and after an hour I muted my television.

As I expressed at the start of this review, this game is a con. If I had paid anything for this, let alone thirty-five pounds, I would be incredibly angry. The developers have done the absolute bare minimum required, and it honestly wouldn’t surprise me to learn that all of the assets used were stolen from a version of one of the earlier Farm Simulator titles. Any music or sounds used are within the public domain, and as such are free, and the credits seem to indicate that this is some sort of family project cobbled together and made to fool people into thinking its something that it’s not, i.e. a game. Avoid like the plague, this doesn’t even deserve the one-star rating I’m forced to give it.