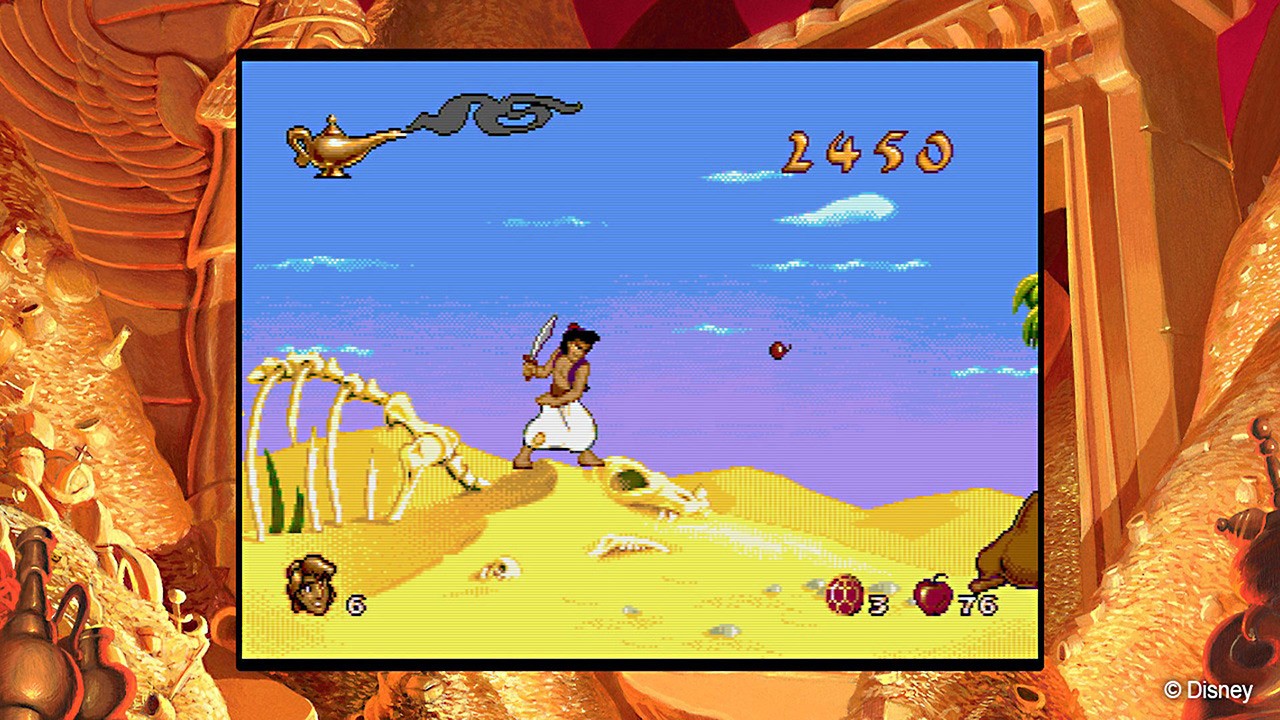 From the day they arrived on the mega drive (genesis), and blinking, stepped onto the SNES. OK, pun over, most people will have heard of these games. Whether having played them in the heyday of their youth or having heard about them from those who had played them when young, Aladdin and The Lion King were two incredibly popular games from the 90’s.

The 90’s were big for both console gaming and Disney. The films have their own success story, but in terms of video games, Disney had a number of big hits in the NES era with games such as “DuckTales” and “Chip ‘N’ Dale’s Rescue Rangers” and these success stories continued in games such as “Castle of Illusion” and “World of Illusion” and later with “Mickey Mania”. Naturally the progression would be to include characters from their ever increasingly popular movie franchises. Thus Aladdin, and later The Lion King, were released onto both consoles. Now in 2019, we have a release that combines the two games thanks to the expertise of Digital Eclipse, who have had previous successes with Disneys “Saturday Morning” Collection of games on the PS4 and Xbox One.

There’s far too much to take in here is definitely a theme that fits these games. It’s quick to point out that the “main” games are from the original “Virgin Interactive” iterations of the games, so anyone looking specifically for the Capcom release of Aladdin will be disappointed. Taking each game separately, the Aladdin game is split into 4 versions of the main game, the S console version, the “Final Cut”, a Demo version that was shown on the shop floor to showcase the unique art style and a Japanese version. This is replicated in The Lion King to a degree, but with an “N” and “S” version of the game, no demo and a Japanese version.

There are also the inclusion of “bonus” games for each, which essentially is the Game Boy/Super Game Boy versions of the games. and packed in with these are a real cave of wonders of bonus features. The museum area contains documentaries, film clips and art galleries of the development process and the art assets used, including some that didn’t make the final cut obviously. There are also soundtrack sections where fans can relive their favourite 16-bit renditions of the films main songs.

Ultimately, there is a strong element of nostalgia attached to both of these games, and the Publishers will be banking on that driving a number of sales. But the real question is, do the games stand the test of time and are they worth a hefty price tag for what are 25 year old games now?

For the uninitiated, these are predominantly 2D platform games that loosely follow the plot of the popular Disney films. Interspersed with the platforming are levels that take the user out of their newly formed comfort zone, often with fast paces on the rails style levels where the player has to position the character to avoid obstacles, such as when Aladdin is flying on the magic carpet, or Simba is avoiding the wildebeasts in the gorge (I’m not crying, you are!) 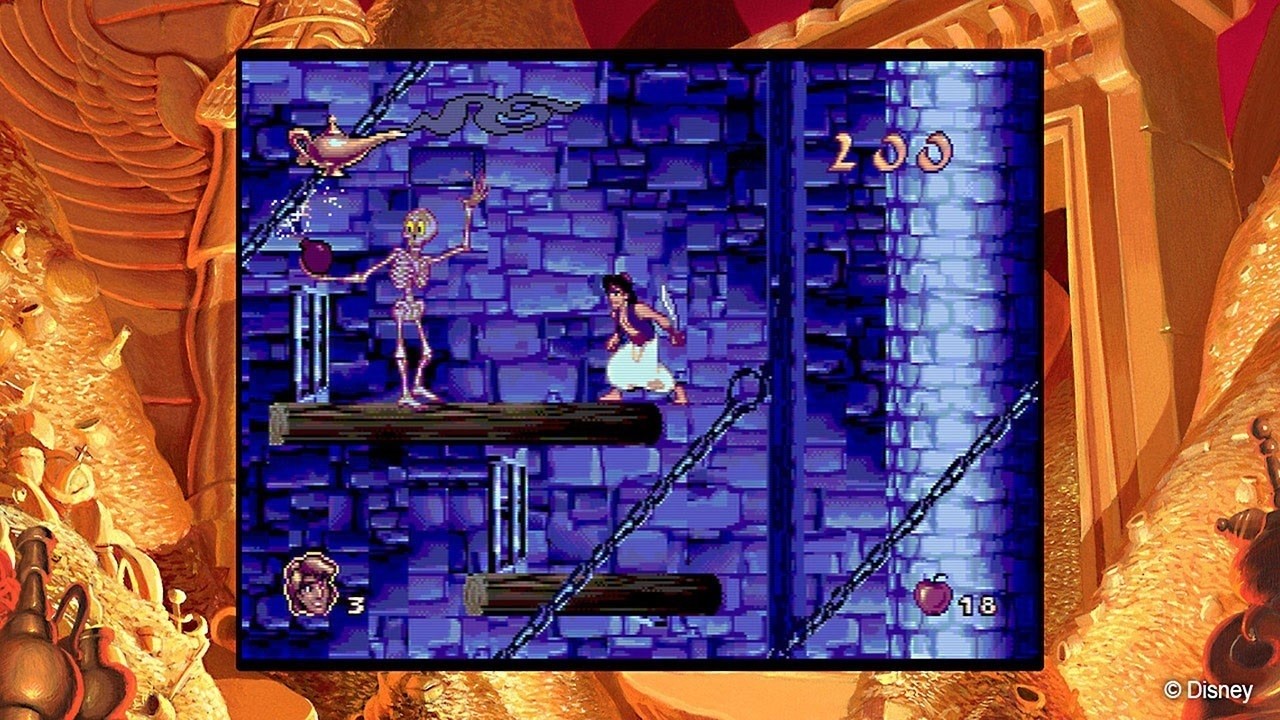 Both games have their own collectibles that increase the life bar, replenish life, earn continues etc. In Aladdin you use gems to buy new lives and continues from the merchant, in The Lion King, you simply find these scattered around the various levels, often in areas that are hidden from view. There are also bonus games that can be triggered to earn more collectibles to use in later levels. In Aladdin this is a simple “fruit machine” style game where you select from a rotating group of items, only losing if you select Jafar’s icon, or a level where you avoid obstacles whilst playing as Abu in a “one hit kills” scenario which drops various prizes the longer you survive. In The Lion King, the games revolve around that lovable duo, Timon and Pumbaa. The first is where Timon is dropping bugs for Pumbaa to catch, where a large belch can clear the screen, the second is a bug hunt where Timon must traverse the jungle to collect various bugs, the proviso is, don’t eat spiders.

The gameplay is where we find the most controversial minefield in this entire review. One thing to remember about the 90’s is that games were short, but difficult. Indeed, it has since been proven that the release of The Lion King intentionally had the annoying monkey characters added to reduce the number of players who could complete it within hours to prevent the popular rental markets at the time from cashing in at the expense of the publishers. And this is where the problem begins.

These games are hard. The difficulty hasn’t changed, what has is the addition of tools to make the game more accessible. This leaves players with a conundrum, do you play the games as intended and have the frustration of difficult levels with few lives and continues. Or do you utilise functions such as the “rewind” which lets you go back and correct mistakes, or simply “cheat” your way through bonus levels to gain enough lives to make the hard work justifiable?

When it comes to level design the levels often overlap themselves, having the player climb up buildings in Agrabah, or climbing down cliffs and ledges in the pridelands, the twisty-turning nature of the levels had it’s purpose in its glory days, but creates for very repetitive levels when combined with the factors mentioned earlier. Boss battles are often quite repetitive too, relying on similar mechanics to dispatch enemies and a “hit x times to win” scenario. Its almost anticlimactic when defeating Scar, as the actual defeat of the boss is quickly replaced with the corresponding animation before you realise you’ve actually defeated him.

A new feature added to these games allows players to watch as the CPU plays through the level for you, allowing you to bypass difficult moments, such as the monkey puzzle in “I Just Can’t Wait to be King” level in The Lion King. Again, most players would consider this as cheating, but it’s very hard to recommend games of this difficulty without including the option to access otherwise restricted content.

However, with these features added, there is little content in the main games. Taking only a few hours to complete, the game shows how little actual content was contained in an original cart. There is also little replay-ability once the games themselves are completed, which is where the extra content fits in nicely to a degree. 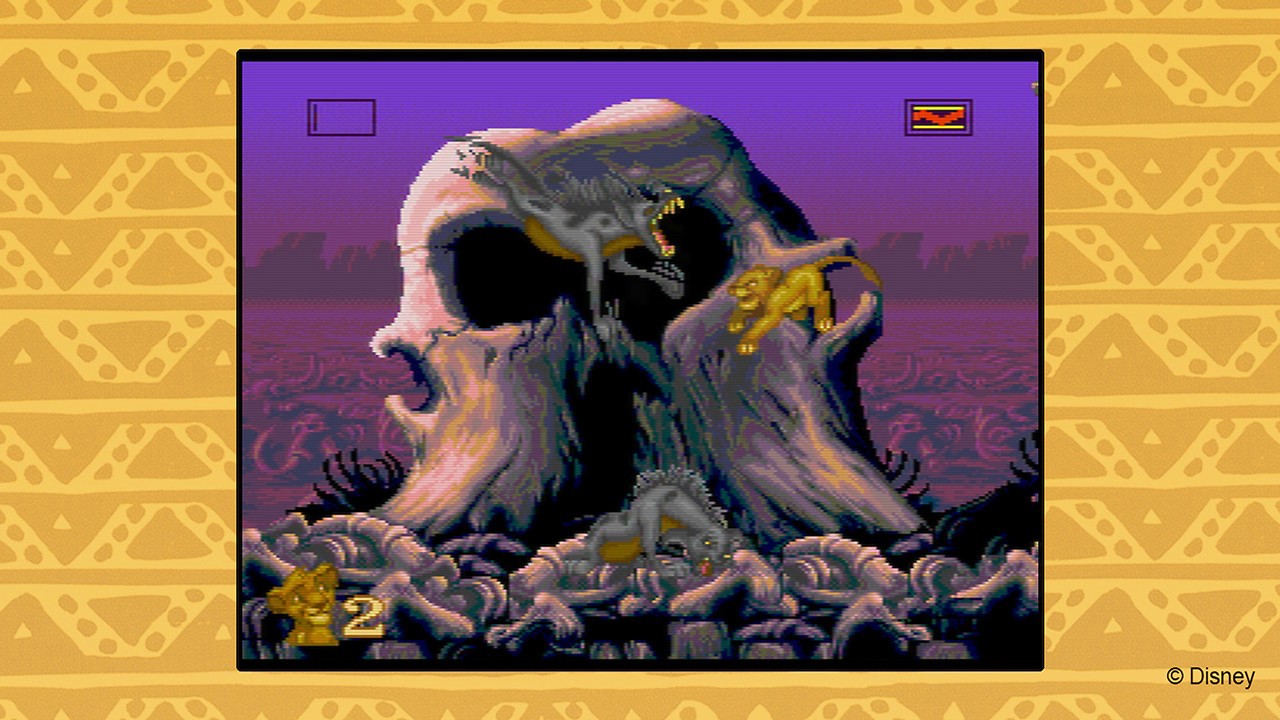 The audio in this game is stunning, and provides a bit of a skew in reviewing the games. The game consists of chip tune renditions of songs that themselves were hugely popular. Any Disney fan will happily be singing along to “Prince Ali” or “Can you feel the love tonight” where their main tune plays repeatedly. Levels also have some added renditions to help in levels that were adapted from the film rather than following on exactly. The soundtrack is fantastic at adding atmosphere to the games, and giving a sense of the environment and it was clear that in a lot of love was poured into the aesthetics of the game.

Added to this is the unique style of the graphics. A lot is mentioned of the cell sprites and fluid animation of the Mega Drive version of Aladdin, having spent time working alongside Disney artists while developing it, and a lot of these skills were transferred to The Lion King. Both games have stunning use of colours and art to make them feel like they are part of the movie in their own right. The sprite art of the main characters is meticulous in its detail, though slightly less so in characters that were designed specifically for the game, probably owing to the lack of available art assets from Disney. The background art was taken directly from Disney assets where applicable and the upgrade in processing power in the 16-bit generation meant that the screens could be a little more busy than their 8-bit counterparts.

Overall, its hard for me to want to promote these games. My own memories of sitting around the TV with my younger brother as he played The Lion King immediately came to mind as I booted up the cartridge. Closely followed by the memories of him getting upset over not being able to complete the very level that had been designed to prevent easy progression. But looking at how far we’ve come since then, quickly brings this game into perspective.

Ultimately, the games are only fun in a small series of circumstances. In their own right today they would be quickly panned but critics and players alike. The additions made by Digital Eclipse, who clearly know their stuff after previous successes, make what could be a terrible port into an average remake that many will actually enjoy. The art and soundtrack add to this saving grace and turn this into a game that can be enjoyed and shared by the family. Finally, the museum pieces and other bonus content bulk up the otherwise limited main games and give that little bit extra for those who are interested in the history and development of earlier games.

The final issue for me is the associated price tag. The cynical gamer in me notes that for the same price you are gaining so much more content in similar games. Lets face it, while not in the same genre, you are offered a lot more content from similarly priced games, including remasters of popular titles. This is definitely a title to pick up in a sale rather than rushing to get it at full price.

25 years on, these titles still have a degree of nostalgic charm. But with the addition of new features it also highlights it’s flaws.