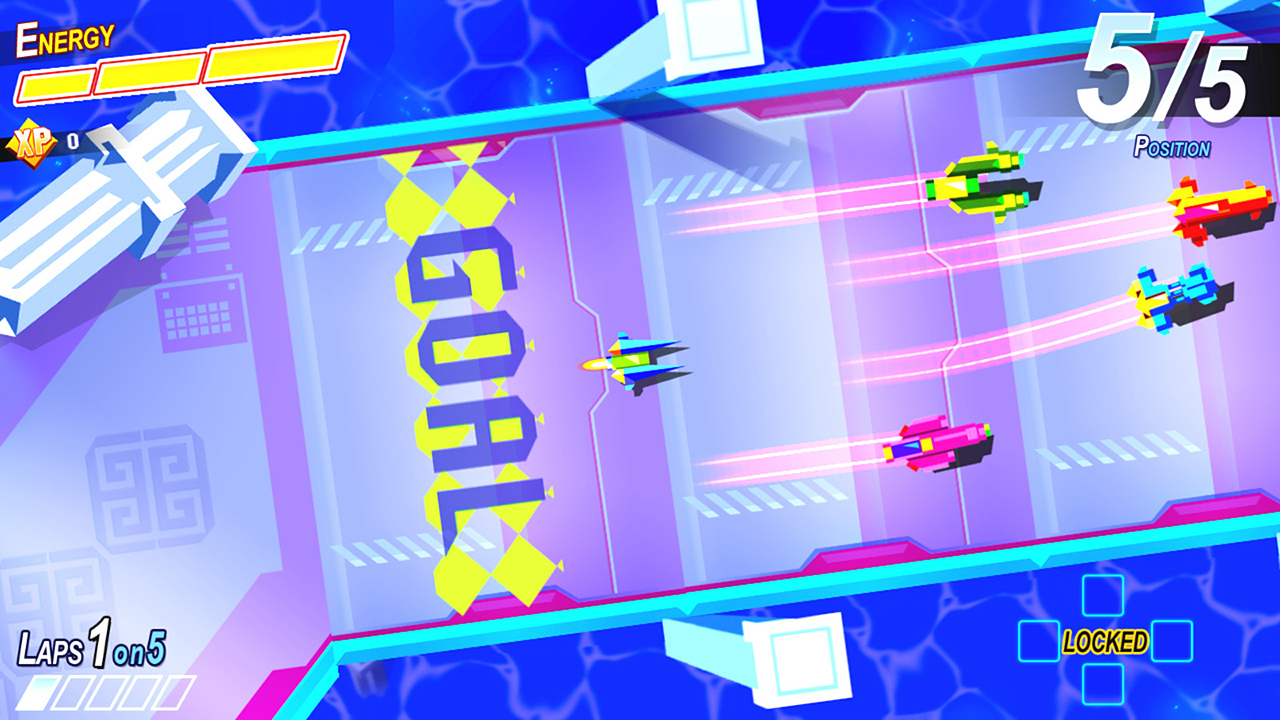 Futuristic racers are never in short supply. Between people being generally disinterested in cars and hoping to eventually reach a Jetsons level of engagement, we always want alternative transportation to be our primary vehicle, be it in the air, under the sea or slightly above the land. But why stop there? Why not give your car LASERS and other ridiculous things, because that’s also how we should travel in the future? Regardless, it’s fun (if impractical) and there’s always a unique take on how we move about the universe in the not-too-distant future.

The Next Penelope is a very cool re-imagining of Homer’s classic The Odyssey, put in the perspective of Penelope, Odysseus’ wife who, according to the Epic, spent several years just sitting around, waiting for her husband and fighting off would-be suitors. In this futuristic take, set somewhere in the year 3044, Penelope understands that her husband is experiencing the wrath of Poseidon, who is very much still the father of the cyclops but also one himself. Wanting to end this war with the Gods and also get rid of the suitors entirely, Penelope makes a deal with Poseidon to bring back her husband for judgment in exchange for this feud to end and everyone to get on with their lives. Naturally, the quest isn’t simple, and Penelope must venture to different pockets of space, each controlled by entities inspired by Greek mythology (The Minotaur, for example) and race against the suitors who still want to win her hand in marriage, thus controlling her husband’s empire. 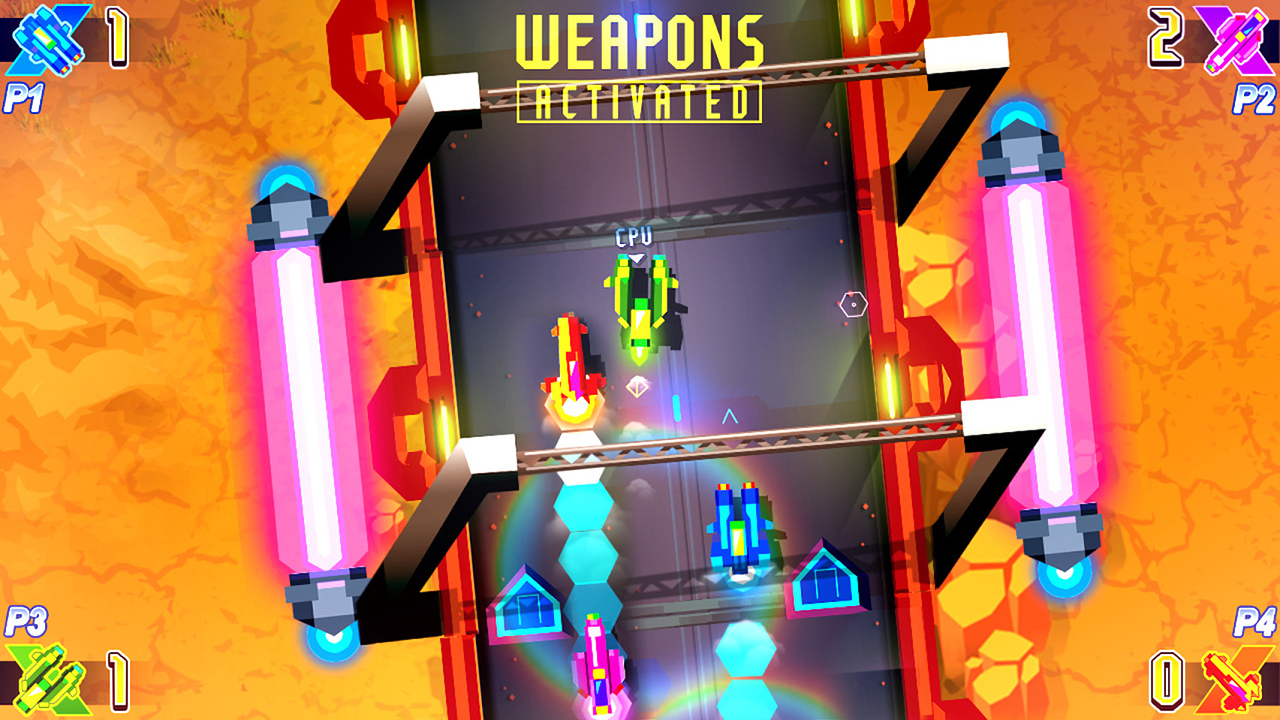 This incredibly compelling story is the backdrop for a racing game that’s done up in a stylish, polygon-heavy setting that’s not quite Race the Sun but very much in the same vein. Penelope cannot and will not control her acceleration: it’s pedal to the metal all the time. Instead, the racer is given a chance to control her turns (which can be very tight) and also a series of power up abilities that unlock over time. Each of the abilities is a massive game changer, and some must be used in order to win. The teleport ability, for example, is your only hope to even exit the Labyrinth, not to mention you still have to be a decent racer in order to place first ahead of the suitors. Well placed mines are the only way to destroy certain bosses, while others simply need you to catch them as fast as can be. Regardless of which course you’re on, your first ability, the Booster, is going to be the key to victory overall. Serving as equal parts speed, attack and debris clearer, the booster is the Swiss Army ability and you’ll want to make sure you get good at when to activate and when to release that boost.

Each of the courses of The Next Penelope are pretty well designed, making sure (initially) to give you a proper grounds for experimenting with the theme of the level, and then really throwing you into it for the next two. The name of the game is constantly tight turns: the game basically telegraphs that to you at the very beginning, when it shows you both control setups (C buttons or shoulder bumpers) and URGES you to do the C buttons, and I completely agree. For whatever reason, the tightness of these turns just felt like they responded better to the C buttons, and also freed up my right hand for better reactions with abilities. I’m still not sure how that works (I’m guessing muscle memory magic) but players serious about making any form of progress in The Next Penelope need to admit they need the C buttons and move on from there. It’ll also ensure you’re either a.) winning the multiplayer races or b.) better equipped to deal with friends who drop mines and shoot you constantly. 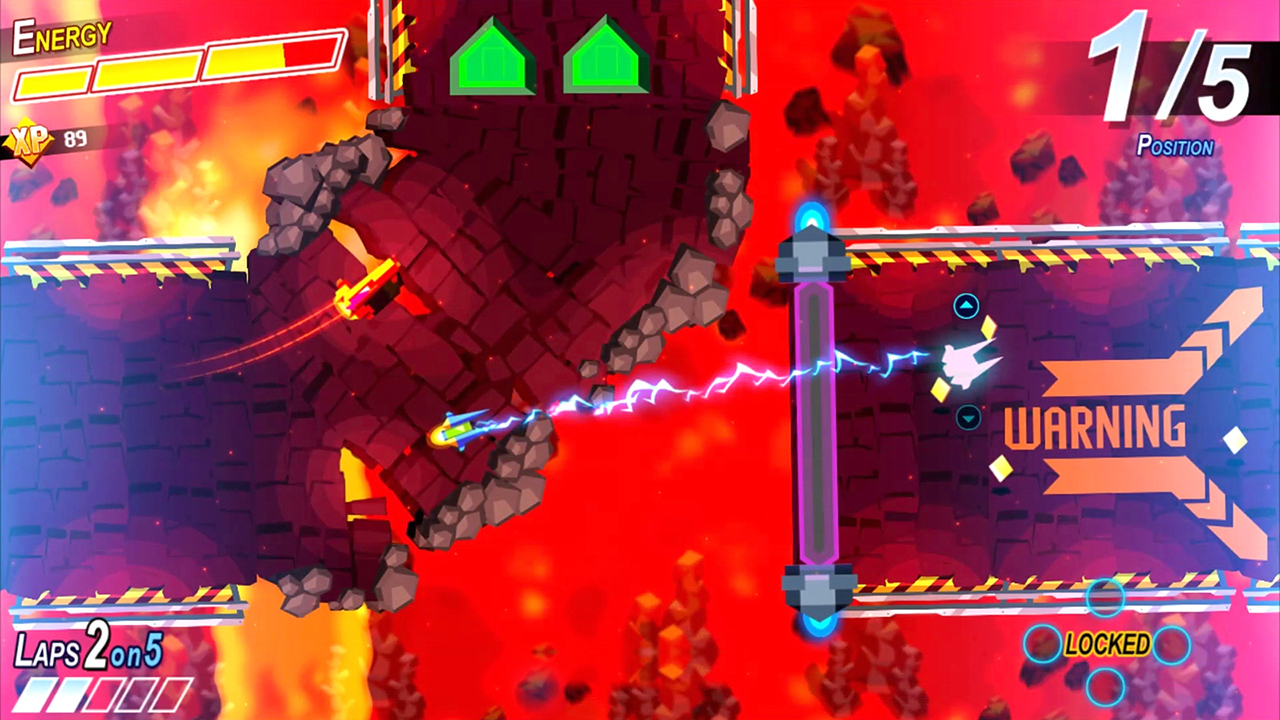 The leveling system is also interesting, in that it’s a real “take it or leave it” scenario. You see, as you win races, you get EXP, level up, and get points to dump into various stats (speed, response, camera, etc.). But these all exist to help players get better when their inherent driving isn’t exactly on par. It’s completely possible to get all the way to the end without spending a SINGLE stat point to level out your ship, and that’s downright compelling. Should you avoid spending your points? Hell no, dump them all into acceleration and kareen around the track like a mad person. But if you’re really set on perfecting your race abilities, you can legitimately do this without needing to level up. Not me, I suck, but it’s possible, so your own investment in Penelope will dictate your future.

Sadly, The Next Penelope is shockingly short: you can seriously get through the whole of the story in fewer than three hours, less if you’ve got good reaction times. But I suppose it’s the classic racer’s conundrum: as long as you enjoy the multiplayer race and competing against people, the full amount of replay isn’t really limited. Still, it’s hard for me to justify coming back to the game time after time when the races themselves are relatively short. But I love the story and I seriously love the aesthetic of it all. There’s something grand about what i call a “Grimy Future,” one that’s both glitz and garbage, needing to delve into dark, cavernous areas only to return to a pristine capital and bask in beautiful displays. This is a cool world for a cool game, and it deserves some attention. I don’t know how many people played it before, but I was a bit surprised to find out it’s a game from 2015. Still, welcome to the Switch, Penelope: I hope your journey forward is fruitful and satisfying.