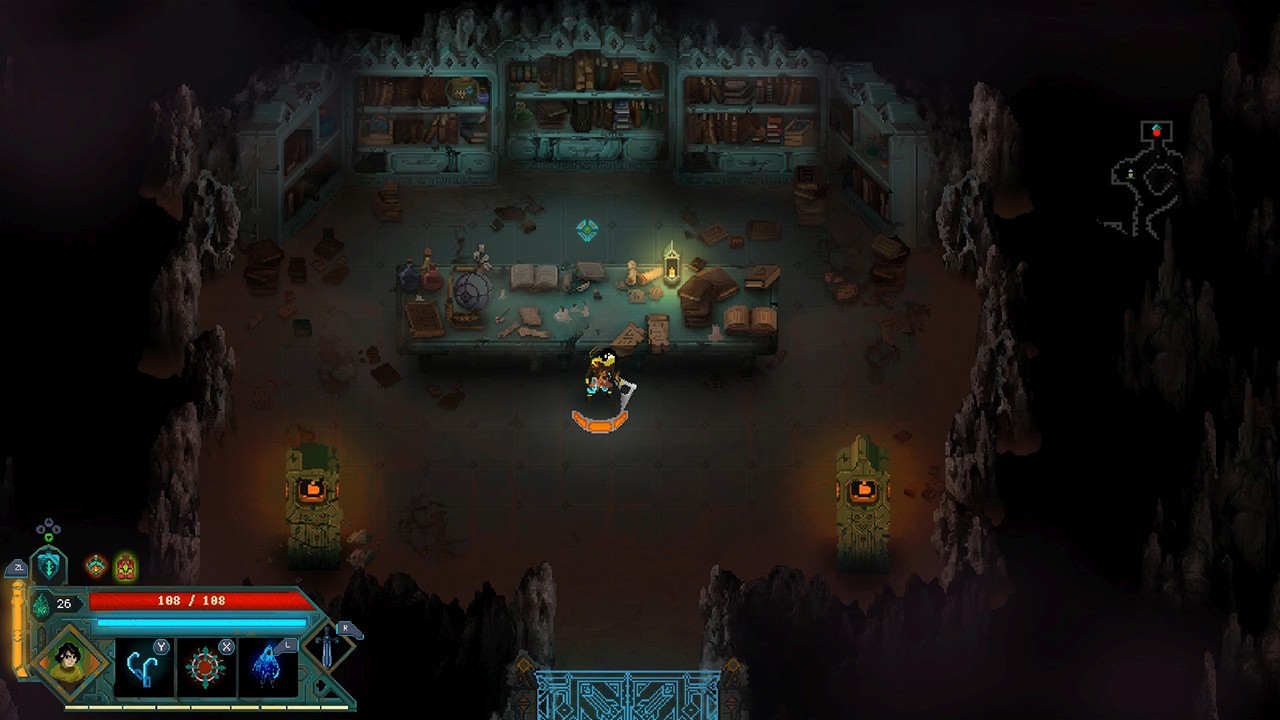 One of the most difficult things, in my opinion, is injecting a story into a roguelike game. For the most part, when you have a great, procedurally generated experience that allows for dropping in and out in a few minutes time, muddling things up with extra details tends to bog the whole vessel down. Games like Rogue Legacy and Neon Chrome do a great job of having the story lie on the outside, letting players dip their toes in and consume bits of lore as its happening, but not stealing focus overall. However, it’s not impossible: when done correctly and offering up ideas of “madness moves around familiar places,” the roguelike elements can enhance the story base. In the case of Children of Morta, a hack-n-slash roguelike from Dead Mages, the story is this amazing glue that holds the entire journey together, and, without it, there wouldn’t be nearly the level of compelling excitement to keep it moving forward.

The Bergson family is one of those special families with deep running ancestry and even deeper running veins of trust. For ages and generations, they have been the Guardians of Morta, living at the base of Mount Morta and keeping the world around them safe and unaware of the danger that creeps out on occasion. Grandma Margaret, the Matriarch of the family, has seen the signs and encountered the shadows enough to know something is awry. The Corruption – a faceless, consuming evil – has begun seeping out of the Mountain, and it infects everything it touches. Trees, animals, plantlife and more are becoming twisted and vicious, bleeding poison and aggressively attacking anything nearby. The Bergsons are well versed defending their world, though, and are ready to dive into the heart of the Corruption, through multiple caverns and levels, to strike down that which would threaten their world. And they won’t do it alone: the family that slays together, stays together.

As we mentioned up top, Children of Morta has a lot of monster mashing ahead, and the different levels change with each iteration of your run. When your character is depleted of health, Grandma Margaret invokes some old magic to pull you out of the Mountain and bring you safely back home to nurse your wounds and try again. The monster density is variable, but, honestly, tends to be quite crazy: even within the first level, I was able to amass a fifty death combination before I had enough cooldown to break my streak. Monsters come in all shapes and forms, from spiders and bats to shambling skeletons and even physical manifestations of Corruption: putrid, purple imps that are relentless and offer almost no XP upon defeat. The monsters also have elite forms, which have glowing, yellow skulls above them and move faster, hit harder, and have significantly more HP. Defeating them usually yields additional rewards, from the coveted HP healing potions and gold to the occasional artifacts. 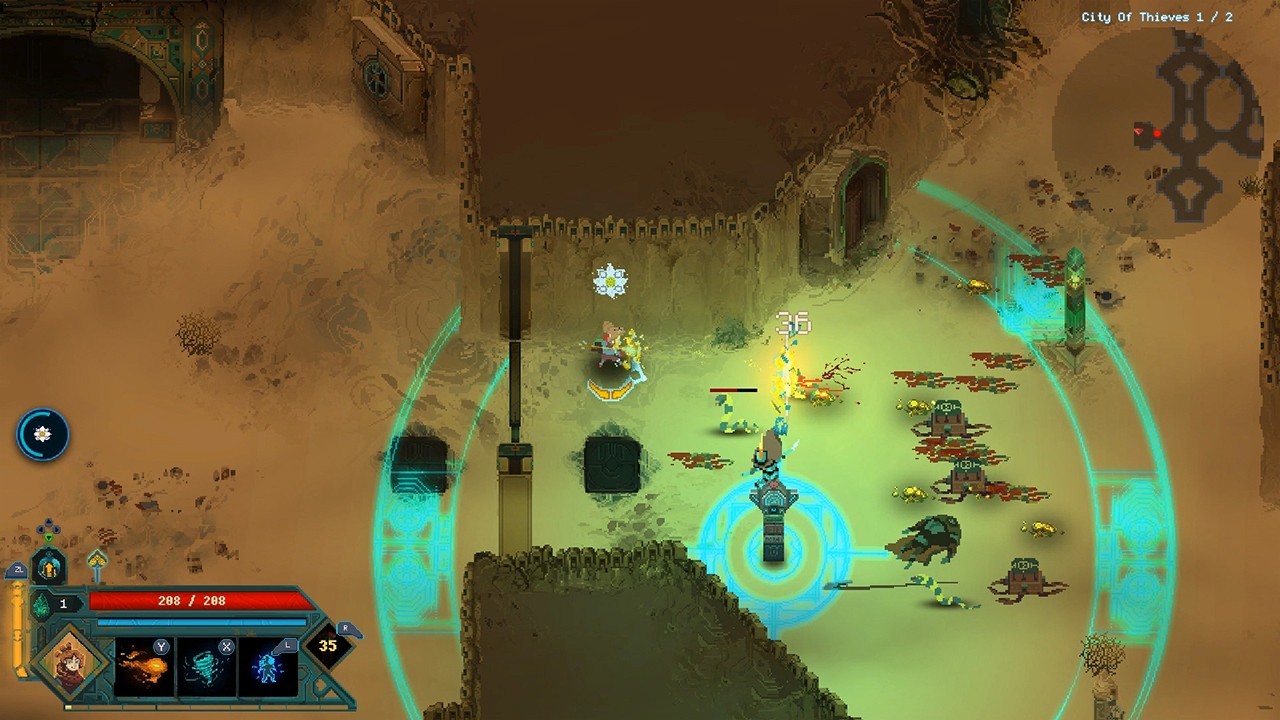 Given that the Bergsons are a family of Guardians, there’s a good range to how to approach the game. The initial characters available, John and his daughter Linda, are totally different approaches to the fight but represent some equally important strategies. John is all brute melee with a shield to back up his powerful sword swings, and Linda is the archer, fitted with unlimited arrows and the awesome ability to keep walking while shooting (at least for a while). You eventually unlock other members of the family, who fill the roles of mage, rogue, berserker/brute and monk, so you can really don any hat to get the job done. I personally recommend Linda because walking and arrowing puts me more in a twin stick shooter mentality, but I can’t ignore the power of Kevin, the youngest, and his blazing fast daggers. Each character gains skills as they level up, adding passive and active traits to their person, such as stronger damage from combos, slower stamina drain, or adding a critical strike with a cooldown period that can change the tide of battle.

The dungeons of Children of Morta are exciting and complex, and sometimes generous in drops and loot. You’ll always be able to return to the Bergson estate with plenty of gold in hand, which can be used to upgrade the overall health, strength, speed and other “stats” of the clan, as well as upgrading the power of the Obelisks, which are stone monuments you find strewn about the dungeons that grant temporary powers, like increased XP gains or faster running speed. The number of artifacts are what really excite me in games like this, because it’s what makes the roguelike approach enticing and addicting. You’ll find these great items that either add special cooldown moves to your character (a blast of knockback, a distracting totem, a last-ditch heal), as well as buffing you up through stat boosts and passive damage additions (burn damage!) and, best of all, orbital, drone-like helpers to give you help that another family member couldn’t. Having a little ball that occasionally locks all enemies it touches into a stasis field for a couple seconds can make all the difference in “not dying”.

The difficulty of Children of Morta is daunting, and I say that as someone who tried to temper expectations coming in. If you approach the game in a solo endeavor, it could seriously take a while, as the madness starts to border on Souls-like in some cases. You need to get really good at striking, dodging, running, and gambling that you aren’t about to end up in a cul de sac with only ten health left. Boss fights are positively insane to go at alone, and Children of Morta makes it very clear that this is a better game as a multiplayer approach. Not only can you mix up the assault by having two or more bodies on the playing field, you actually get benefits from being in a group. The Bergsons all have special “family traits” that are unlocked as they level up that grant bonuses to the group as a whole. Kevin and John may not see eye to eye in being in the fray together (Kevin is the youngest, after all), between Kevin’s addition of critical hits and John’s boosted HP, the two compliment each other to create a whirlwind of destruction. Grandma would be so proud. 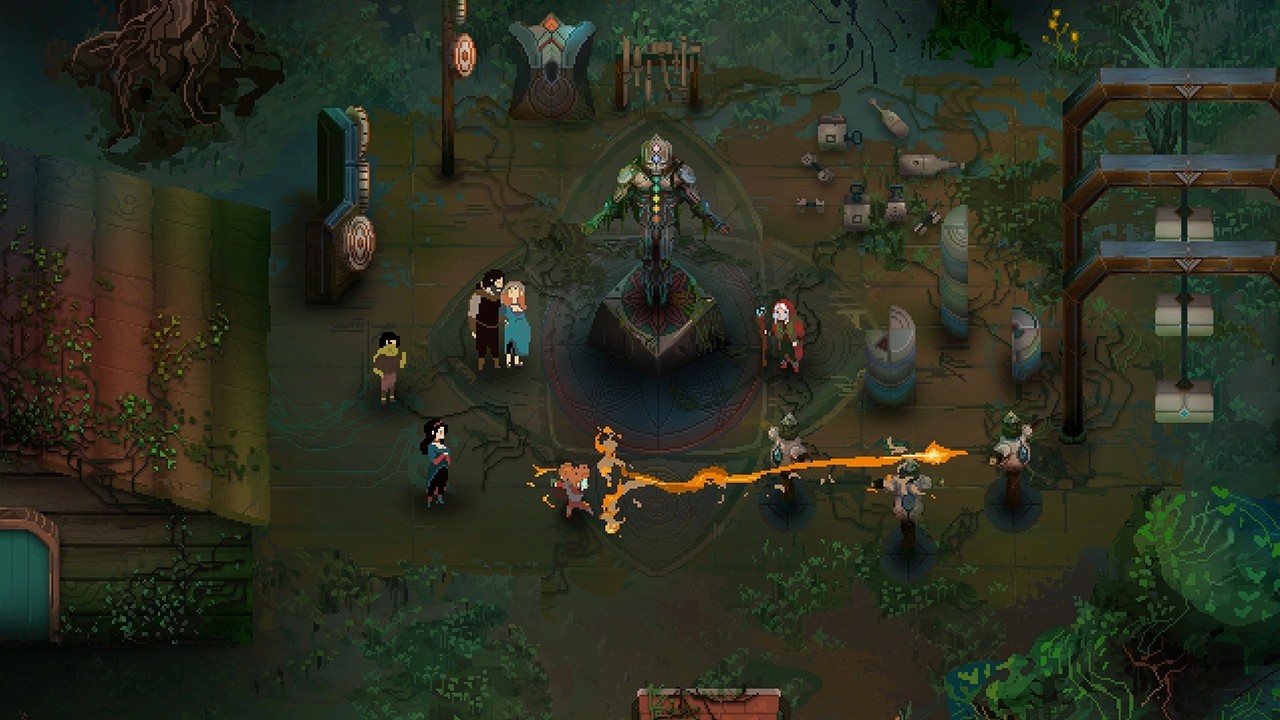 As much as I adore the gameplay, it’s the presentation that makes Children of Morta such a spectacular event. Firstly, the graphical design is out of this world. Working with a dense, scaling pixel art approach, Children of Morta gives a distinctly detailed but angular view when you’re close up in the dungeons, allowing for separation of different NPCS and items, but also allowing this beautiful “indie” vibe to pump through the veins of the players. When the camera pans out and you see the full scope of things, such as Mount Morta itself or the Bergsons home, it’s wonderfully crafted and full of color, shape and attention. It’s a visual feast to behold, and it gets hoisted even higher with the strong soundtrack that pulls you deep into the lore of the story. The game scales well between looking at it in handheld mode and docking it, though I recommend putting it up on the big screen both for appreciation and for better real estate use during co-op mode. Family members don’t want to be stepping on each other’s toes.

Finally, the story presentation. Children of Morta often bookends each run into the dungeons with exposition about the family’s inner discourse, both in discussion of what to do next and the musings of individual characters. The battle against the Corruption is as much a part of saving the world as it is in coming together as a family. As much as I love the narration, I sometimes mute the volume and read it myself. It has a dramatic pacing and deliberate heaviness that gives the gravity of some important, ancient epic that draws you in. If you’ve ever seen 300, there are several times where David Wenham is describing the thoughts and depictions of what he saw during the battle of Thermopylae. It has that level of weight as you read, and it sends chills down my spine. When the narrator is giving context and thoughts about love when the Bergsons discover the wolf pup, it damn near tore my heart out. It almost made me forget about the long, long load times between levels. Almost.

The only downside to playing Children of Morta on the Switch is that it really does have some long, long load times. For a roguelike game, you gotta be able to get situated, clean up and dive right back into the fray. In this case, there’s some allocation and grace given during the story parts: we gotta hear what Grandma Margaret has discovered, or what we should be doing next to move the quest forward and unlock other family members. Still, you stare at that load screen both when you jump in and when you’re pulled out for a while, and it gets you feeling antsy. I’m sincerely hopeful that a future patch from Dead Mages can speed things along, because that is the only thing that’s keeping this game from totally dethroning every other roguelike on my Switch, and I’ve played a few.

If you can teach yourself patience and understand that you might need to practice deep breathing exercises between runs, then you’re in for a hell of a ride. Between amazing graphics, exciting gameplay and a serious difficulty curve with plenty of co-op benefits, Children of Morta is a wild swing that connects for critical damage and positively stuns the competition. Clear your schedule grab some cocoa and put it in a spill proof cup: the Bergsons have quite a story to tell you.

Children of Morta is one optimization patch away from being my favorite roguelike game of the last few years.