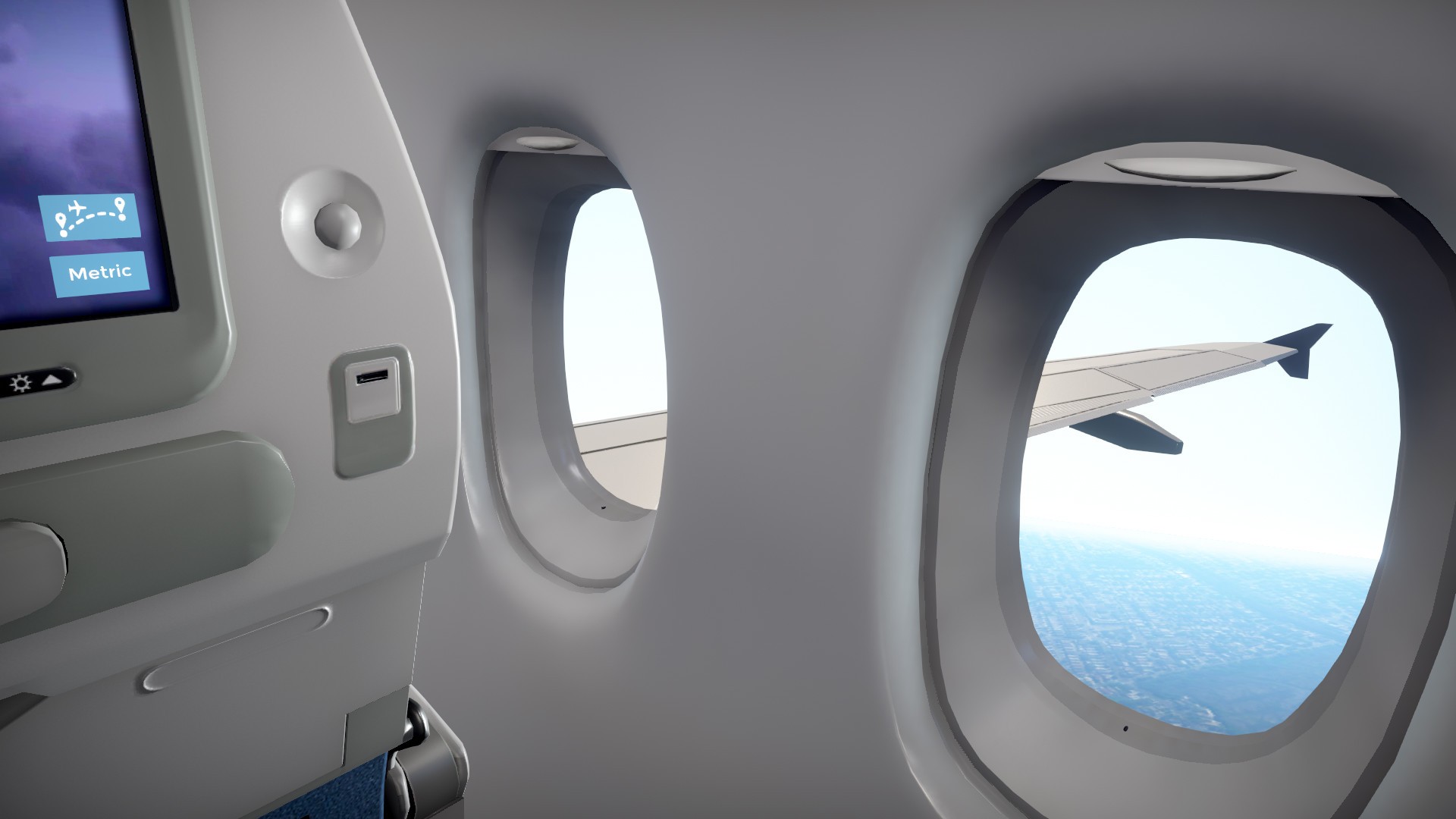 In the modern era, taking a flight is as commonplace as driving a car. Flying used to excite people, you’d start your day in one country, and end it miles away on a beach in the middle of nowhere, you know no one, and nobody is interested in what you are doing. It is what dreams are made of. Nowadays, taking a flight for a business meeting is the new norm. That was until COVID-19 impacted global markets and made us all stay at home. Planes were grounded, and peoples bedrooms became their new offices and meeting rooms. Those who take regular flights may find that they are having withdrawal symptoms from their everyday routine. They may miss their interaction with the flight attendants, the uncomfortable feeling of someone stealing their armrest, the cheery announcement from the flight desk, or the over priced snacks and dry tasteless inflight meals being as predictable as the sun rising and setting each day. If you are one of these people, or you love flying, my latest review title will be right up your street. Airplane Mode is a flying simulation game that allows you to experience all the thrills and spills of modern day flight.

Developed by Hosni Auji and Bacronym and published by AMC this title asks you to take on the role of an everyday passenger on a commercial flight. Now, I’m putting it right out there, I have no problems with flying, in fact, I enjoy the experience, but that’s not because I’m some plane spotting geek, no, it’s because I know that once the arduous journey has ended, I get to go on holiday. So, for me, I don’t really get the concept behind this game, especially in its current build. Let me briefly explain why. The whole gaming concept revolves around you sitting in a seat, not moving around a plane, not interacting with any of your fellow passengers. No, sitting in an open spaced solitary confinement. Heck, I went toilet more times than my character, this guy has a bladder of steel, and he drunk several coffees.

Anyway, let’s get back to the game. I’m going to try to look at this from a neutral perspective, taking into account my own experiences with flying, and how the game played out. I know that there will be a market for this simulation title, people will yearn to get back into the seat of a plane, and this is the safest way in the current climate. So, what can you expect if you take on this game? You will be given the opportunity to take 2 different flights; one around 2 hours long, and the other 6 hours long (that’s 2 or 6 real time hours of your life, with no ability to fast forward, or pause). You are confined to your seat throughout, so the only form of entertainment that you have at your disposal is what you find in the vicinity of your “prison”.

Each journey starts out the same, though the layout of your fellow passengers changes. You are in your window seat (thank goodness for that, no one wants an aisle seat) looking out to the tarmac. Your table tray is in the upright position, window blind open, and your seatbelt is ready to be fastened. The seat pocket in front of you has all the normal paraphernalia, and your hand luggage is stowed under the seat in front of you. You will hear a friendly announcement from the staff, and the usual waffle from the pilot, and then your journey begins. You watch the world outside the window slowly roll past you, the engines roar, and you take off. From this point onwards the peaceful, yet mundane existence of being a passenger on a flight begins. 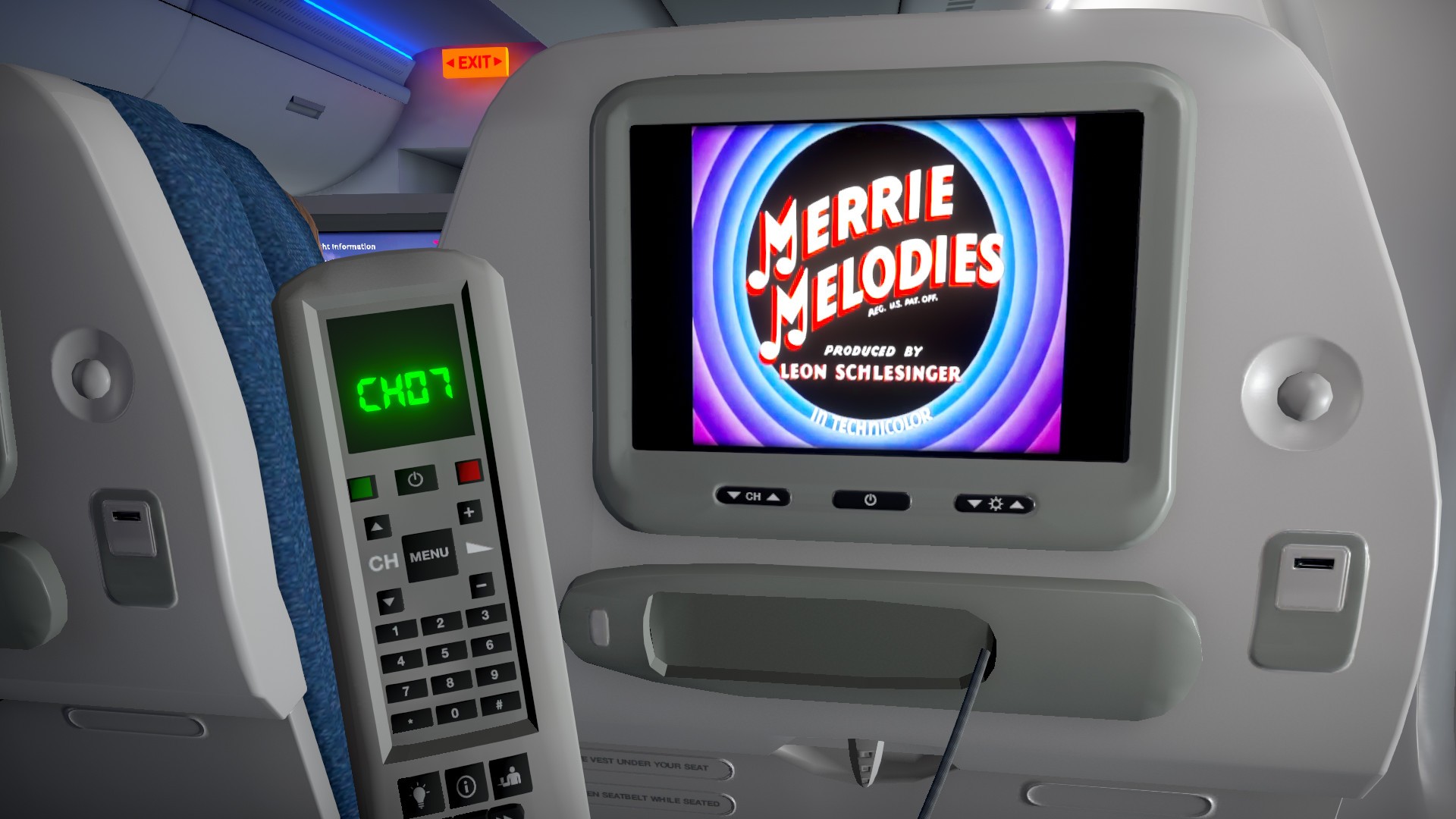 Even the old school cartoons won’t save you from the never ending flight.

From the moment the game loads in you are free to do what you wish (except move and interact with people). The instructions given over the PA system can be listened to, or like most people who fly, they can be totally ignored. After all, who cares what happens if you crash into the sea and don’t know what you have to do. I spent the whole pre-flight section playing with everything I shouldn’t; turning on the lights, playing with the air, dropping my tray, playing with my phone, and shock horror, not doing up my seat belt. For me, the most fun in this game was when I blatantly disregarded all aviation laws (oh what a rebel). Once you finish larking around, you are free to read through the inflight magazine, complete the crossword or Sudoku with the pen you have with you (don’t make an error mind, as it can’t be undone and you are not provided a second magazine). The TV screen in front of you allows you to flit between channels, and there is a small selection of cartoons and films to watch to eat into your time.

“Is that it then?” is probably the question on your mind, pretty much, though you get some surprises on the way, and the cabin crew provide you with a delicious and nutritious meal. So what is the point? I guess there isn’t one. You either obsessed with flying, or you are not. If like me you fall into the latter category, then you’ll probably want to steer well clear of this, but if you are a lover of all things mile-high, then you will probably already have this in your library, or on your wish list.

I don’t want to talk negatively about this game just because I didn’t fully appreciate its concept. All the game mechanics perfectly represent the travel industry, and the monotony of modern day flying. You know that you are going to be trapped in a metal tube for hours on end, you must fill that time wisely, for me that usually involves plenty of alcohol, unfortunately I didn’t have any at hand while trying this game out. Unfortunately, this Airplane Mode isn’t without its issues, it tends to crash a lot, and it has several bugs that impact your ability to use certain items. There are workarounds to get them working again, but I hope that the developers soon iron these out as they ruin the game, and make it extremely frustrating to play.

Being a simulation game, I have an expectation that the world around me looks as I expect. The gameplay feels like the real-life situation, and I’m absorbed and immersed into that experience. It was a bit of a mixed bag, really. The plane looks good, the equipment moves as it should, and feels very familiar with any flight that I have taken in the past. The character models are dated, but do work, and the finer details are rough around the edges. What was unforgivable was the look of the environment when you look out of the window. I was reminded of a PS1 game, it was truly disappointing, I simply shut the window blind and couldn’t bear to look outside again. 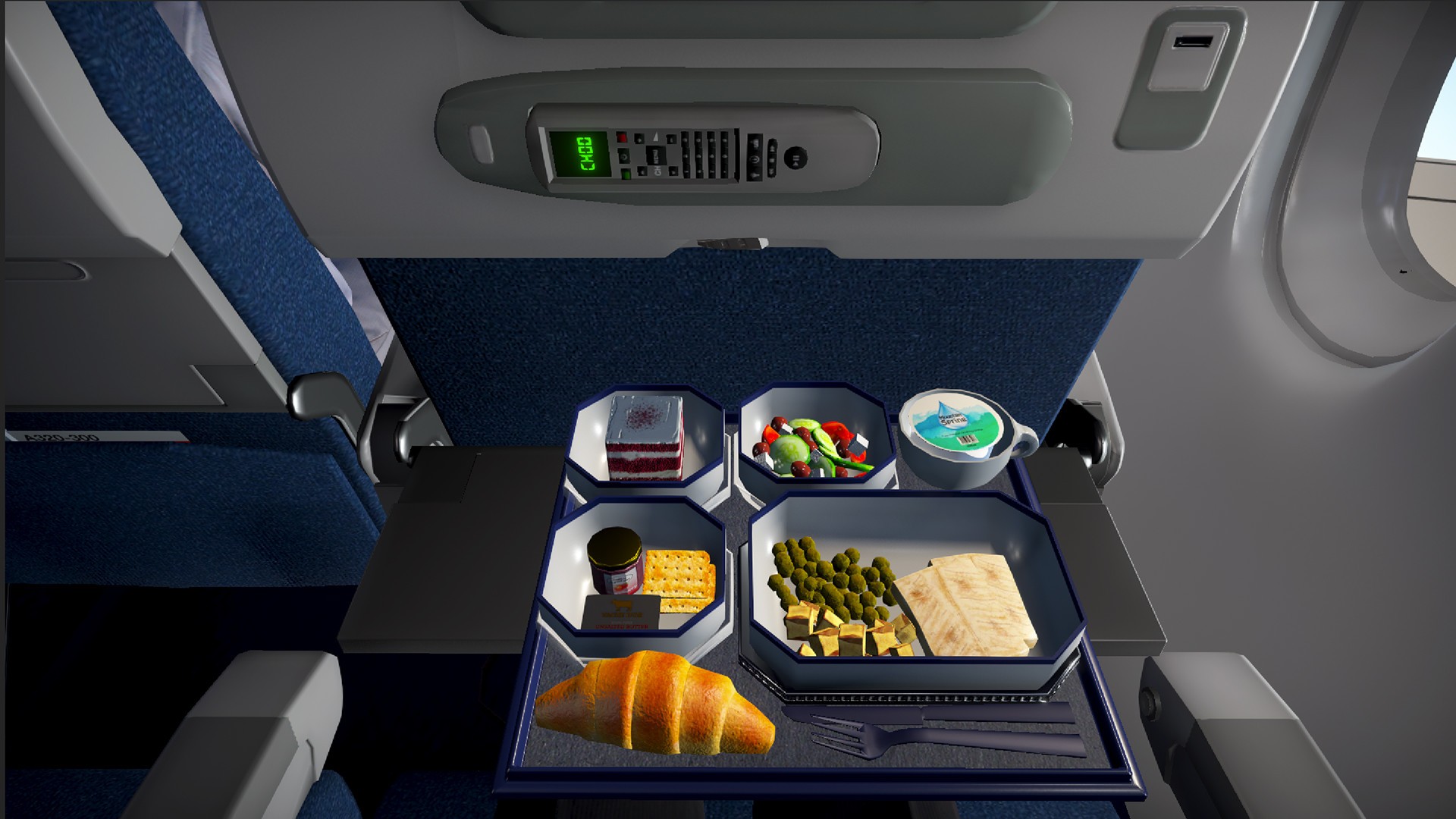 This looks as appetising as a real inflight meal.

The graphics may have let this down, but the audio didn’t. The speech from the cabin crew and the pilot were fantastic, it was well scripted, and timed just like in real-life. The roar of the engine during take off, and the squeak of the wheels during landing transported me to that seat inside the aircraft. The constant humming of the engines, and the ambient sounds that come with travelling by air all worked well to set the scene.

As the whole game is restricted to no movement, and actions are kept to a minimum, it won’t surprise you that this is easy to pick up and learn. Each item that can be interacted with is shown with an orange highlighted circle, and when you select the object you are asked to move the cursor as if you are turning a page, flicking a light, or opening a bag. The replacing of items can be a little cumbersome, and I found this to be very frustrating.

The replay value in this genre is down to personal taste. For me, I won’t be returning to play, not because the game is not good. No, I just didn’t get the concept. Flight for me is about going from A to B, and not the experience in between. I want it to be an enjoyable one, but I’m not bothered as long as I get there safely, and usually half-cut. If you are a person who loves the bit that happens between your house, and your destination, then you will probably return to play this repeatedly.

This won’t be a game for everyone, and it needs a fair bit of polishing to make it more accessible and reliable. It was a shame that the developers focussed most of their energies on the inside of the plane. Your character is forced to sit in the window seat, and the only thing he gets to see is the blocks of hideous colours floating by. Daydreaming out of the window is one of my favourite parts of flying (except for the beer), and to have this removed by poor rendering and graphics ruined my experience. Do I recommend this? I’m not sure it matters what I say here, if you enjoy flying you’ll buy this even if I say it’s trash, but yes, I recommend it, even if it’s not quite the finished article. Grab your passport, and your hand luggage, it’s time to go on holiday, even if you never get to leave the plane.

Fancy taking a flight without the holiday? Well, now you can! Airplane Mode is a simulation game that gives you all the thrills of flying economy.