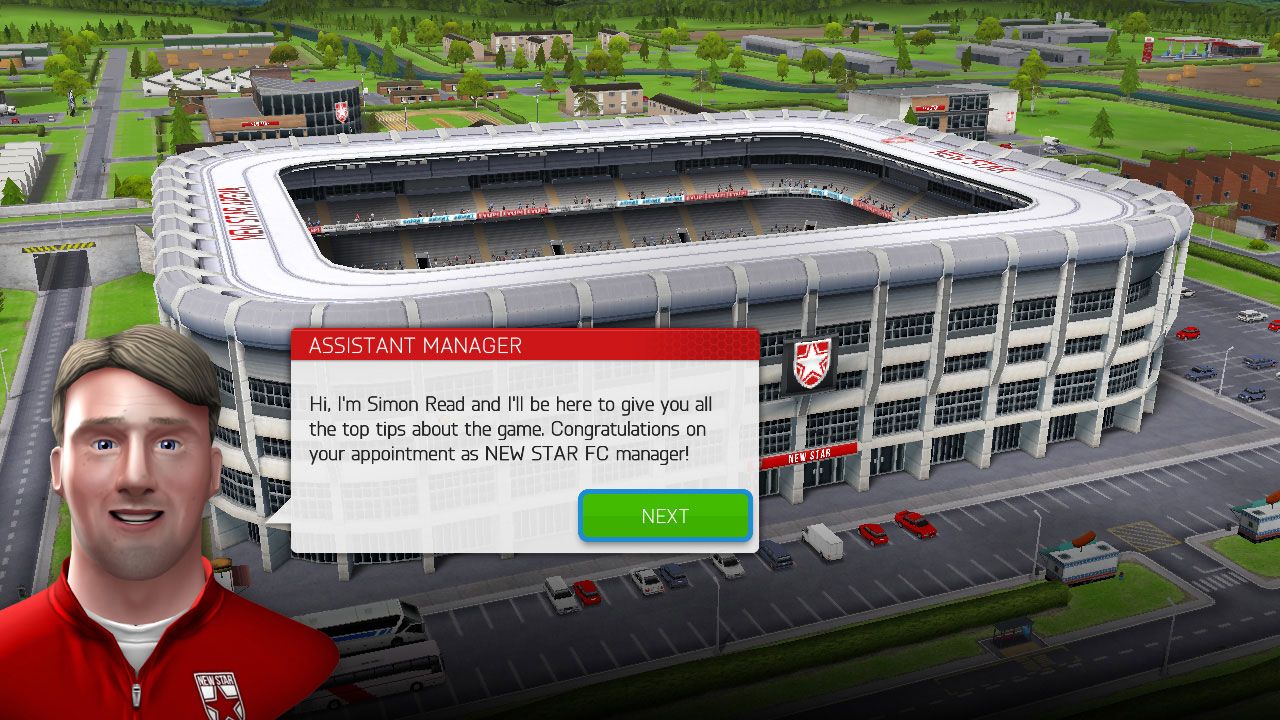 Football management sims can be quite off-putting to some gamers, especially with its usual stat-heavy formula and daunting premise in maintaining a successful team; especially when it’s all done from behind your desk and rarely with any input on what happens on the field. All that is set to change though, with New Star Manager kicking a release onto the Nintendo Switch to bring football home to a wider audience of wannabe managers.

Developed by New Star Games and published through Five Aces Publishing, this latest title within their series of soccer games follows on from New Star Soccer, but whereas you controlled just one player in that game, this management version now sees you taking charge of a whole team, both on and off the pitch. The game places you in the hotseat as you take charge of New Star FC, although a wealth of personalisation options does allow you to create your own team name, kit and badge, as they struggle at the latter end of the season under the threat of relegation. As the season draws to a close, the game takes you through a tutorial of final matches as you learn the mechanics with which to save the club and begin your journey to steer the sinking ship onto a glorious future.

The first thing you’ll notice about this title, is its presentation. Everything here has a vibrant and welcoming feel to it. There’s no stat-heavy databases to trawl through or player comparisons to spend hours within. What you do get is an overview of your ground and available surrounding land, a quick and intuitive menu and a user-friendly interface that instantly lets you glance over various aspects of running the club. It immediately creates an attractive viewpoint as the game’s home screen, with its aesthetical appearance changing as you develop and upgrade the club and its facilities. Invest in the stadium and pitch and it changes its appearance from the Sunday league to a premier division. Add youth and scouting facilities and the stadium develops annexes to produce a footballing village that even Real Madrid would be envious of. 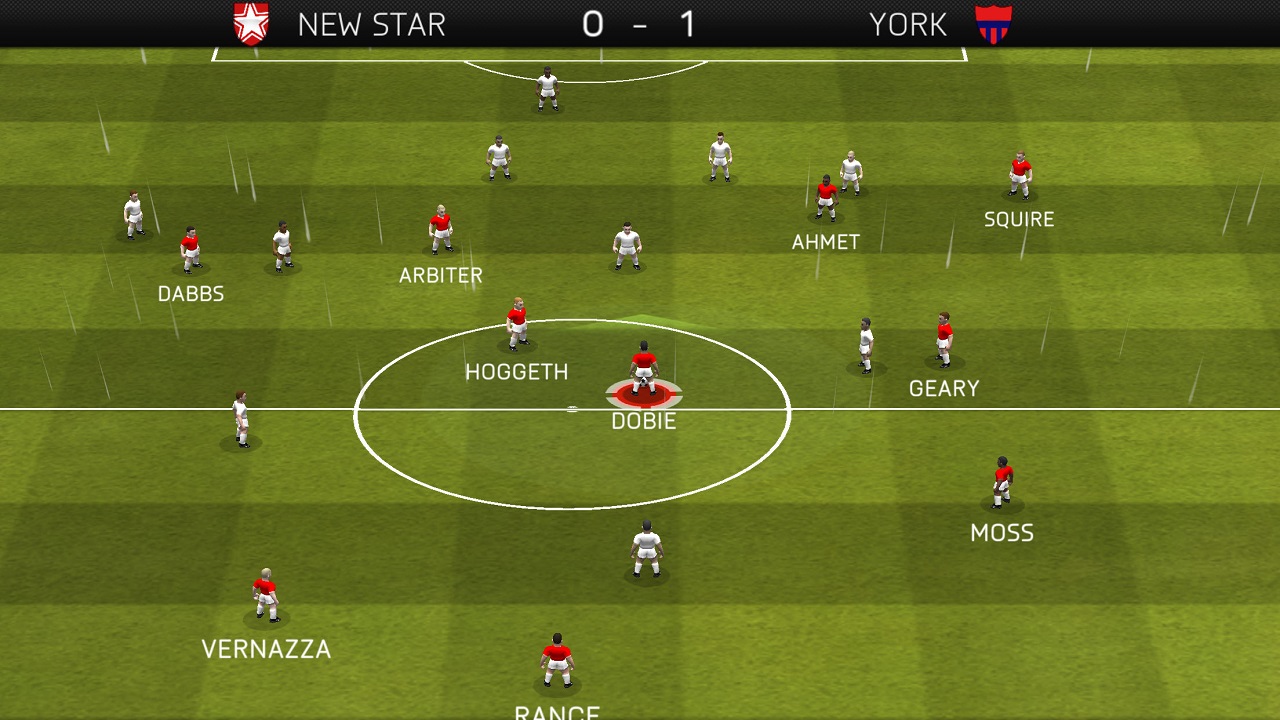 There’s a high degree of depth here, with various elements that need to be maintained in order to produce results. Not only can you invest funds into projects; something that needs to be maintained through gate receipts and sponsorships, but you also have to ensure that your fans are happy, through ticket pricing and pitch performances, the chairman is satisfied and that the press want to give you coverage. Keep all these balanced and the books will balance themselves, allowing you to invest in better facilities, youth opportunities and other players who may be available within the transfer windows. Although the level of depth may appear quite daunting, in reality its been implemented in such an accessible fashion, that it becomes an interesting aspect of the game and one that never feels complicated or difficult to manage.

As well as running and developing your club, you also get to control the action of each match day. Team selections, formation and tactics are all here and again, are presented in an easy to follow format. However, if you want to delve deeper, you can also investigate player relationships, traits and star qualities. When your team selection and tactics are ready, you then partake in a variety of league and cup matches to return your team to winning ways. This is achieved by controlling the action on the field through a series of highlights that follows the progression of each match. Again, there are variety of different aspects to this part of the game with determining ball paths, player runs, defensive tackles, as well as maintaining fitness and even giving team-talks at half time.

Using either touch-screen or conventional controls, the on-screen action pauses as you plan out tactical positionings and ball plays through a series of instructions. Want the player to make a particular run? Then you simply draw a line for him to follow, while you direct the player with the ball to make a through ball. The action runs in a start-stop mechanic, as you build up your play towards the ultimate prize of scoring a goal. Much like the day-to-day planning of the club, playing the matches is an easily accessible premise with a variety of options; even one that rewinds the action should you make a mistake, although this function can only be used once per match, so make you sure use it wisely and tactically. 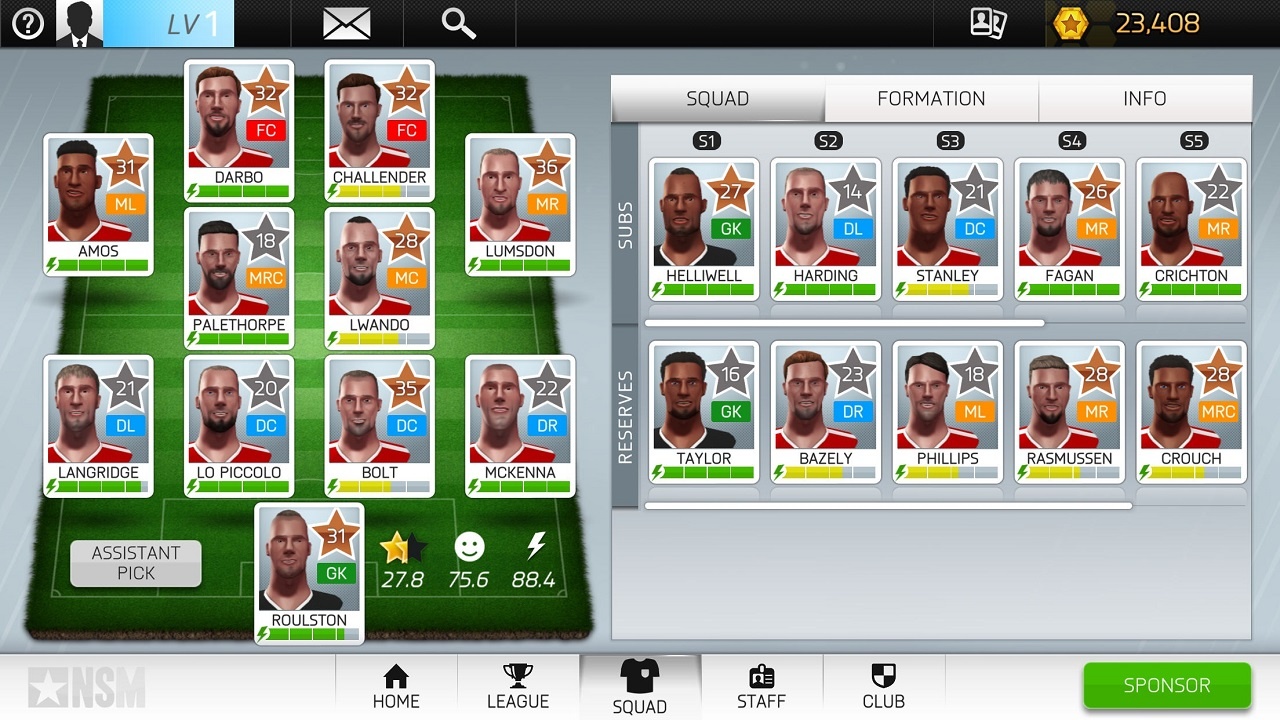 Player management is implemented through the use of special cards that can maintain fitness levels, change positions and give a team-boosting half-time talk. Through staff and personal progression, you gain packs which you can open, that contain a number of cards that can be used to enhance your team. Upgrading facilities and completing a series of objectives awards more cards that opens up further areas of the game from scouting to youth development and contract talks to management board meetings. You even partake in pre or post-match interviews with the media; their questions often touching on issues with the club which you need to answer successfully to maintain a happy camp. It all adds to an investment that makes you care about your club and its players.

There are so many elements to the game, that I wouldn’t be surprised if I’ve missed anything out within the writing of this review. The amount of depth, personalisation and options are simply staggering here, yet none of them ever feel out of control of complicated in their nature; on or off the pitch. The simplicity of its nature makes management a fun prospect and playing the matches a thrilling affair. There’s a real focus on making this a management game that is accessible to anyone and in this premise, is a game that succeeds in what it’s trying to achieve to great effect.

Overall, New Star Manager is a perfect fit upon the Nintendo Switch. It’s user-friendly, fun to play with an addictive quality and rarely feels out-of-hand or loses the player invested in it. Playing matches and upgrading facilities offer a rewarding experience, one that is further enhanced with its rewarding card mechanic and team successes. In fact, thinking hard about it, I can’t find anything that is remotely bad within any of the games’ elements. If you’ve got the slightest interest in football, or have ever fancied yourself as a manager, but have been put-off with the other titles that are available out there, then this is a game that will provide a high level of entertainment with a form of longevity that can last for many seasons. In short, the beautiful game just got more beautiful.

This is a game that will provide a high level of entertainment with a form of longevity that can last for many seasons. In short, the beautiful game just got more beautiful.