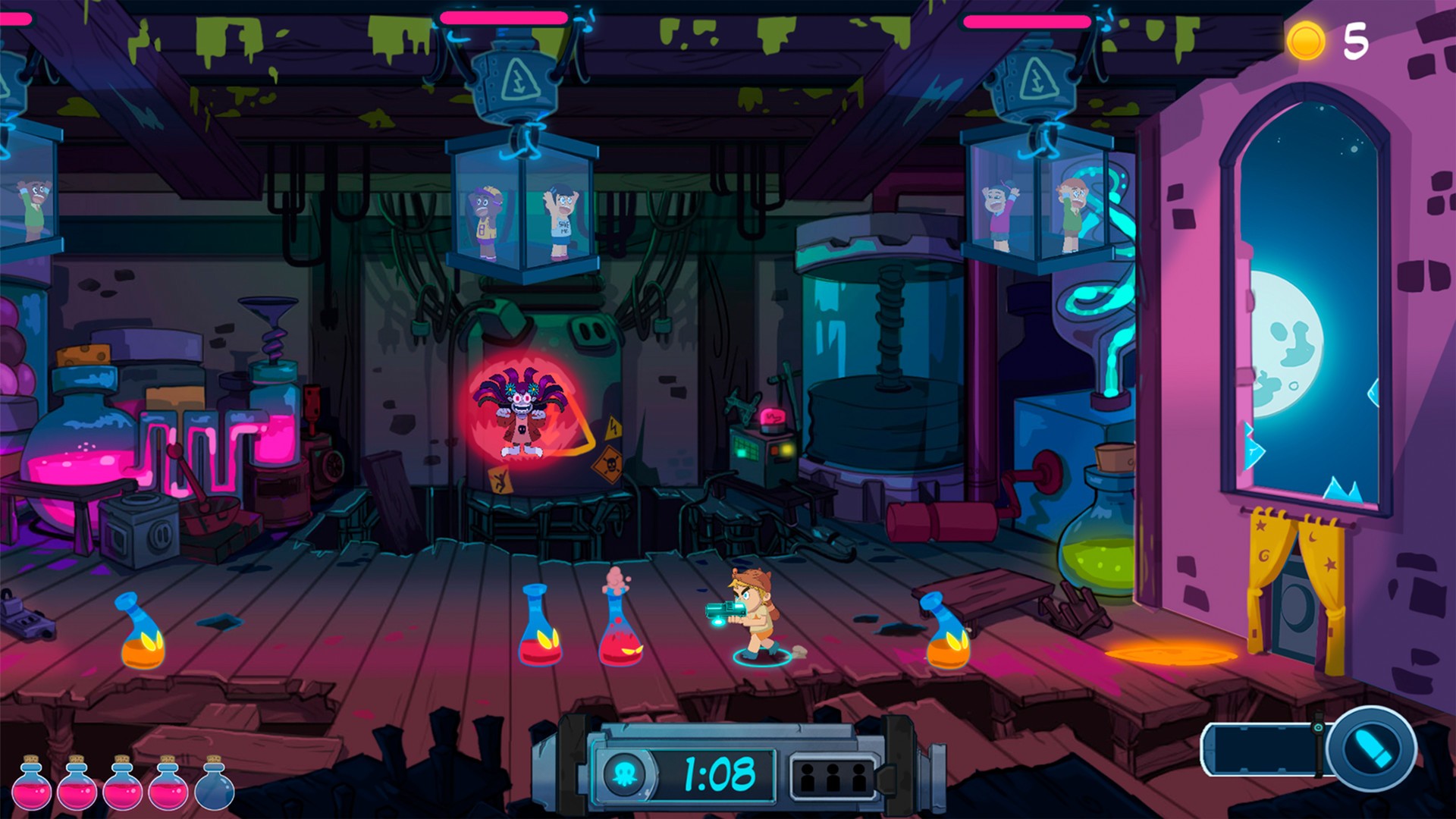 What a mixed bag Max and the Book of Chaos is. On the one part, it feels like it will be a run and gun platformer (based on screenshots and the tutorial), then it shifts to a modern Space Invaders with power-ups galore, then after completing a stage, we have a few RPG elements to play with to give you the edge in the next round. Few! It’s a little bit mental, but those are both good and bad points.

Playing as the title character Max, you’re on the lookout for Mr Brownstone. No, you’re a kid, not looking to score, he’s been knockin’, and he won’t leave me alone. Someone will get that reference. Anyway, he’s the school janitor that’s gone missing and when Max catches up with him, finds he’s been turned into a hulking pelican. Naturally. Max too has become a racoon, but only with Naruto-like whiskers on his cheeks.

It works out that Mr Brownstone was trusted with keeping the Book of Chaos under protection, but he’s ballsed up, and now it’s run loose, turning him into a pelican, trapping children and causing all sorts of mayhem. Well, it isn’t called the Book of Serenity. Max, with his racoon abilities and savvy with a gun, sets out to rescue the kids, retrieve the book and return Mr Brownstone to his former custodian duties. It’s mad as anything, but it doesn’t need to make sense as the gameplay is sheer mayhem. 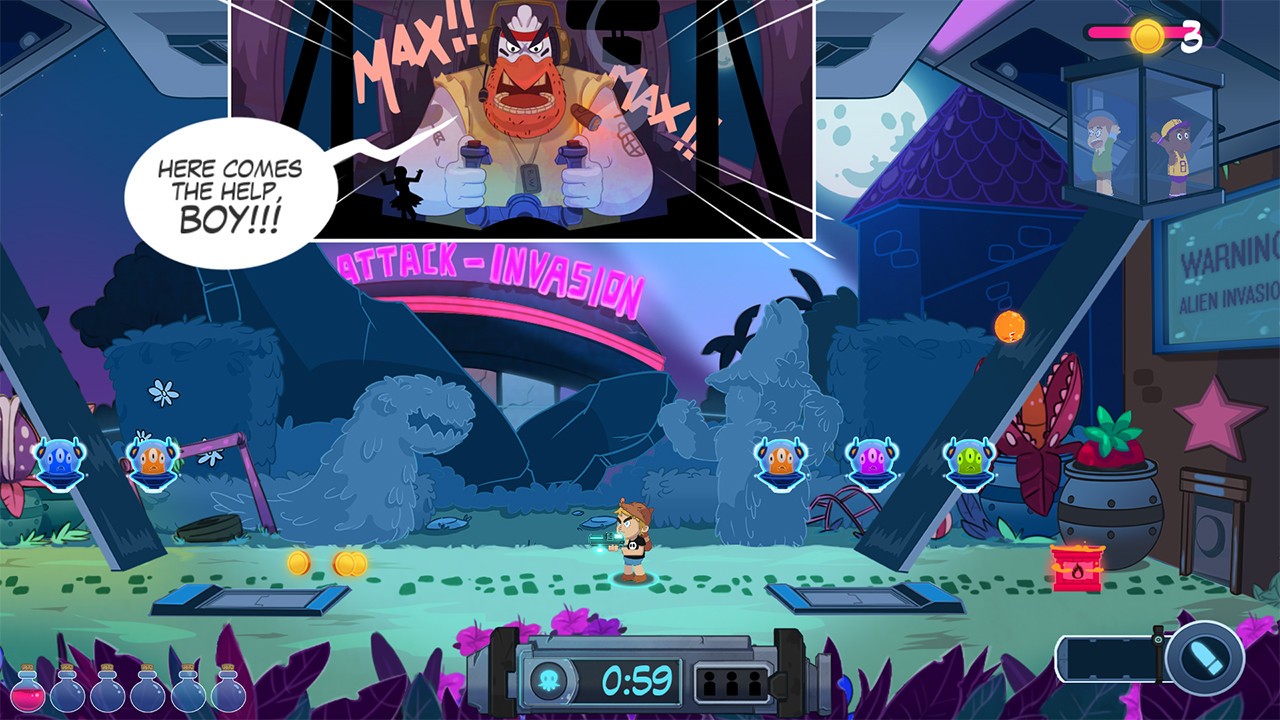 Now I could lie and say the game is a walk in the park, but it’s not. Admittedly, I adjusted the settings to fast track my progress, but even that was challenging. Max and the Book of Chaos is split into various levels with an end boss for each, respectively. In the build-up to the boss are numerous stages that add a bit more time to the countdown in the game. You see, you have to survive by the time the clock reaches zero and adding more time and harder enemies, makes it increasingly difficult.

Armed with a gun that automatically powers up with each enemy you kill, Max can shoot to the left and right, up but not diagonally. With this lack of direction, it means you’re constantly having to move across the screen to either dodge attacks or position yourself under aerial enemies, preventing them from hurting you. Throw in plenty of power-ups, and you get the picture. You don’t have a base to protect, just your health, and once it’s gone, you’re dead.

For each enemy killed you get coins which can unlock new gear, and every stage has kids locked in a cage, held captive above your head. If you shoot the cages and rescue them, you’ll get a star – a total of three are available, and these go towards goodies. After a successful run, you head back to your supplier, Mr Brownstone, and he’ll sort you out with permanent power-ups, buffs and skins. Skins for cosmetics, mind. Each time you purchase them, the price goes up for the next, so it took some time to earn enough for the next instalment. My disappointment, however, was that you could only have one active at a time, so you’ll get an extra bit of health, boosts for a specific gun or a magnet to collect more coin, but not at the same time. 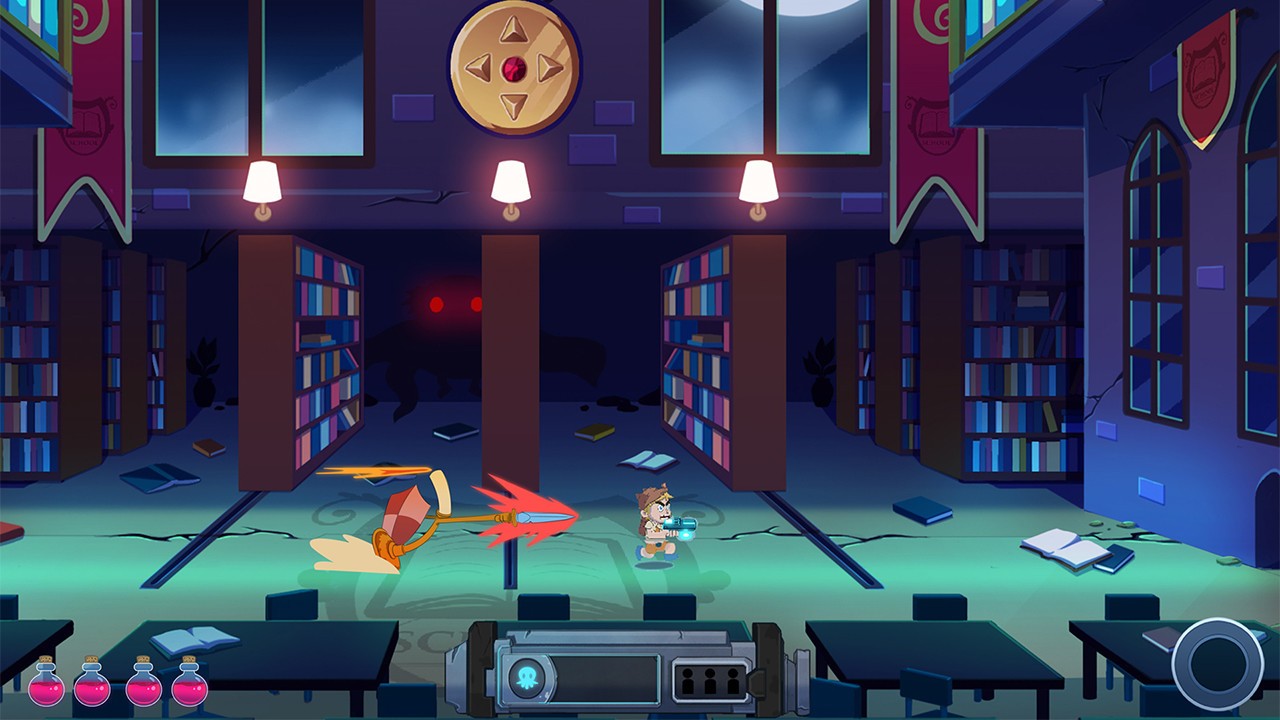 This was quite frustrating as the game is so hectic and you do need the perks to get through. When you finally get through the staggered difficulty of the stages, you’ll fight a boss who plays tribute to Cuphead in so many ways. It was incredibly challenging to dismiss the design choice – there’s no vintage cartoon filter present, but the characters feel like they were borrowed from the title above – the first boss looking like one of the first bosses in Cuphead. The boss levels play well, but they are quite drawn out, and you have to defeat the boss following how it was designed – you can’t blitz through, instead take off a bit of health, wait for a wave of minions, then repeat.

Max and the Book of Chaos is a challenging game, and I was quite surprised how enjoyable yet challenging it was. As with the fusion of genres, I’m not sure who the audience is as the art style and dialogue seem to be for a younger audience, but the gameplay for die-hards. Well, casual too, but don’t expect it to be easy. A quick note on the dialogue: it’s riddled with spelling mistakes and the misplacement of words. I was quite surprised that the game passed through the checks as these were evident from the get-go. Of course, it doesn’t ruin the game as it isn’t a visual novel, but I don’t expect to see so many in the opening of a game.

Overall impressions of the game were good, however. It caters more for shooter fans as the RPG elements are an after touch to fine-tune your game. It reminded me like Metal Slug, Pang, and Space Invaders all rolled into one, which isn’t a bad thing at all, but as they say ‘too many chefs spoil the broth’ and with so much going on, it misses the mark occasionally and feels a little rushed. Nevertheless, a game recommended to run and gun fans.

Max and the Book of Chaos Review

If you don’t mind a single playing area without scrolling, Max and the Book of Chaos is a modern Pang/Space Invaders hybrid with a running story about a dodgy book and magical powers. It does feel like it copies the best parts of top games like Cuphead, but just a little messy in places for it to be a read standout title.