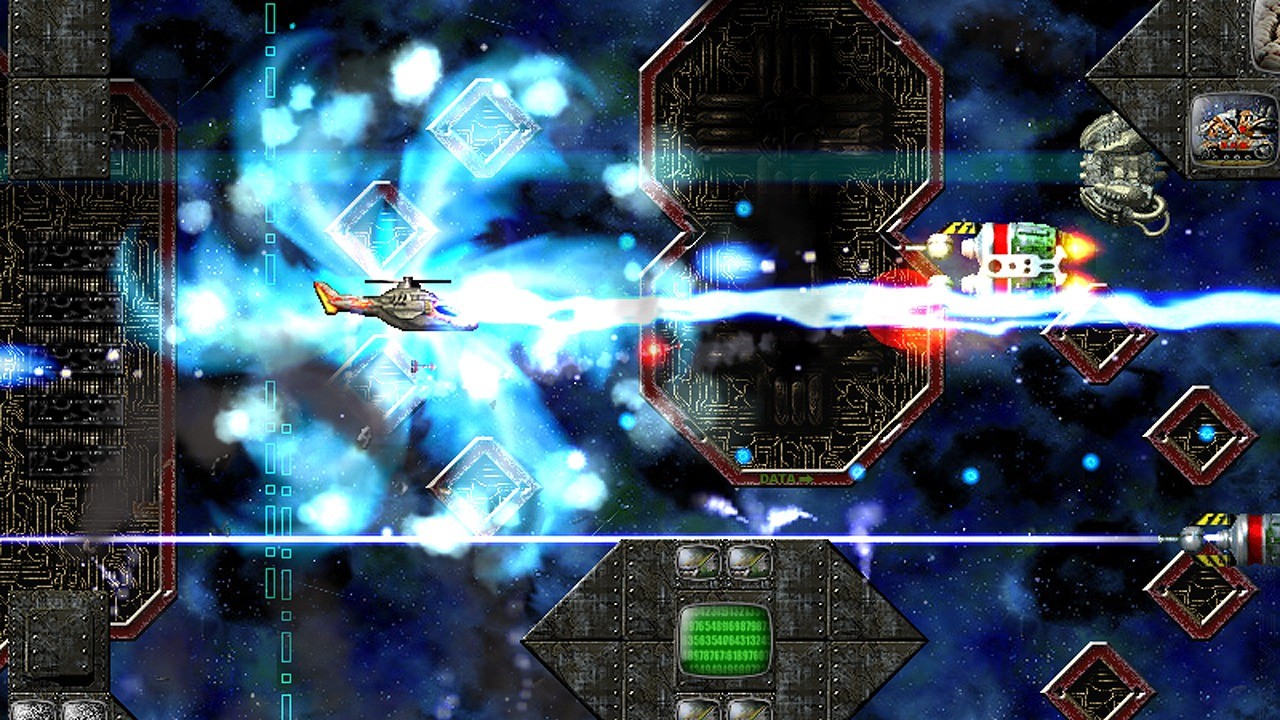 The horizontal shooter is a many faceted beast that we’ve seen in tons of forms over the years, and even over the brief lifespan of the Nintendo Switch. Shooters have a natural home with the portable console, as it allows for anywhere gameplay with arcade level quality, plus vertical shooters have been able to incorporate the original perspective into the games with a bit of originality. Horizontal, however, still is one of the most natural, as it directly correlates to how players of the home consoles know games unfold. That’s why it’s unsurprising that Rake in Grass’ original game, Jets’N’Guns, was first released for Windows before anything else, as it fit most naturally with PCs rather than arcade cabinets. Also, it allowed for them to tap into the audience they hoped to reach most easily: Tyrian fans.

Yes, we’ve returned to the stage of gaming where we are, again, hooking players with promises of shared experiences from yesteryear. Jets’N’Guns makes no attempt to hide their adoration or connection to the evolutionary vertical shooter that tore up MSDOS machines around the globe some 25 years ago, and that’s easy to see why. It’s one of the most lauded and appreciated home shooters of the generation, and still rings true today in the execution and excellence. Jets’N’Guns, to its credit, still tries to do its own thing with a good air of humour, grittiness and original presentation. For example, we get the game plot that feels more cinematic than anything else. You’re a former soldier who’s now retired into the world of freelancing, which can occasionally turn to mercenary activities when the price is right. We’re in the far flung future where moving between planets and galaxies is just an afterthought, and ships can be retrofitted with any number of missiles, guns and other goodies, so working as a hired ship for whatever is not unheard of. But then you’re contacted by your old commanding officer, begging you to save a captured soldier from the evil dictator Xoxx, who we thought was defeated but is back again. Soon the hero is thrust into a world of mayhem and chaos, with terrible plots unfolding that could mean the destruction of the very universe if we cannot stop Xoxx. See? Cinematic! I’d watch that movie. 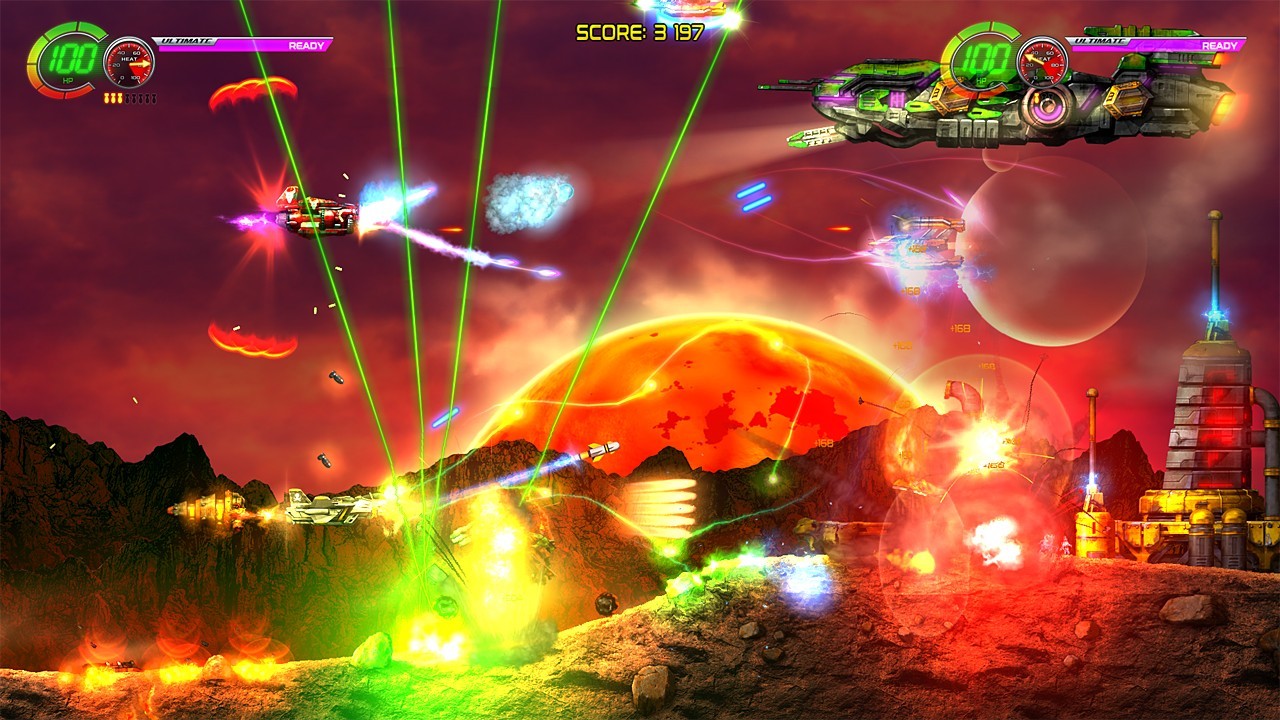 Jets’N’Guns works in a traditional horizontal scenario, with enemies, debris and unmovable landscape objects peppering the screen in front of you. You need to navigate around the landscape, shooting anything that isn’t you, and doing your best to dodge around bullets and lasers intended for your hide. Your hull can gradually get depleted if you get struck too many times, so keep your eyes out for any holes where you can hide from shots and also for hull upgrades to patch up the damage. Enemies will, occasionally, drop some extra goodies, so look out for abandoned cargo boxes, rubber duckies and other secrets and fun things, plus intergalactic hitchhikers looking for a ride. Oh, and you can’t hurt the hitchhikers, so don’t be afraid to flood the screen with whatever weapons you can get your hands on to combat the enemy ships, of which there can be MANY, particularly later in the game.

What keeps Jets’N’Guns a bit separated from other horizontal shooters is the execution of the upgrade system. As we mentioned up top, inspiration from older games allows Jets’N’Guns to incorporate a customizable, purchasable set of components, many of which have some clever descriptions thanks to Rake in Grass putting in the effort of actually writing stuff about the different guns. Even from the very beginning, the number of options is quite varied, allowing players to choose to invest in traditional bullet-based guns, more for plasma/pulse ammunition, and even offering up a different kind of ship right from the drop (though I highly discourage using the Wiener-mobile inspired ship unless you’ve gotten plenty of practice beforehand). Weapons can be assigned to the front and the back, and different ship models offer you a different variety of bombs or missiles for secondary weapons. In theory, being able to start out on a normal difficulty with a bit of coin in your pocket (or the easier “too fat to die” setting) means that you can upgrade your ship before the first mission and get some serious mayhem going.

However, the upgrade system is also the learning curve and ultimate challenge of Jets’N’Guns. You need to strike a balance between what you can afford and what your ship can handle. Larger weapons and more upgraded turrets means faster overheating and you needing to cool down the system as soon as possible. It’s great to be able to unleash death for a couple of precious seconds, but what happens when you’re physically unable to shoot back for a couple seconds afterwards? It might not seem like much, but the enemy density in Jets’N’Guns can get heavy, fast, and you need to be more worried about where you can move versus what you can dodge. The bullets, though pithy from the enemy, can add up over time, and larger shots like rockets or energy blasts will absolutely tear a hole in your hull before you can even think of what just happened. As a reckless individual, I got my ass handed to me no fewer than eight times by the second stage (first boss) before I figured out the ebb and flow of it all. 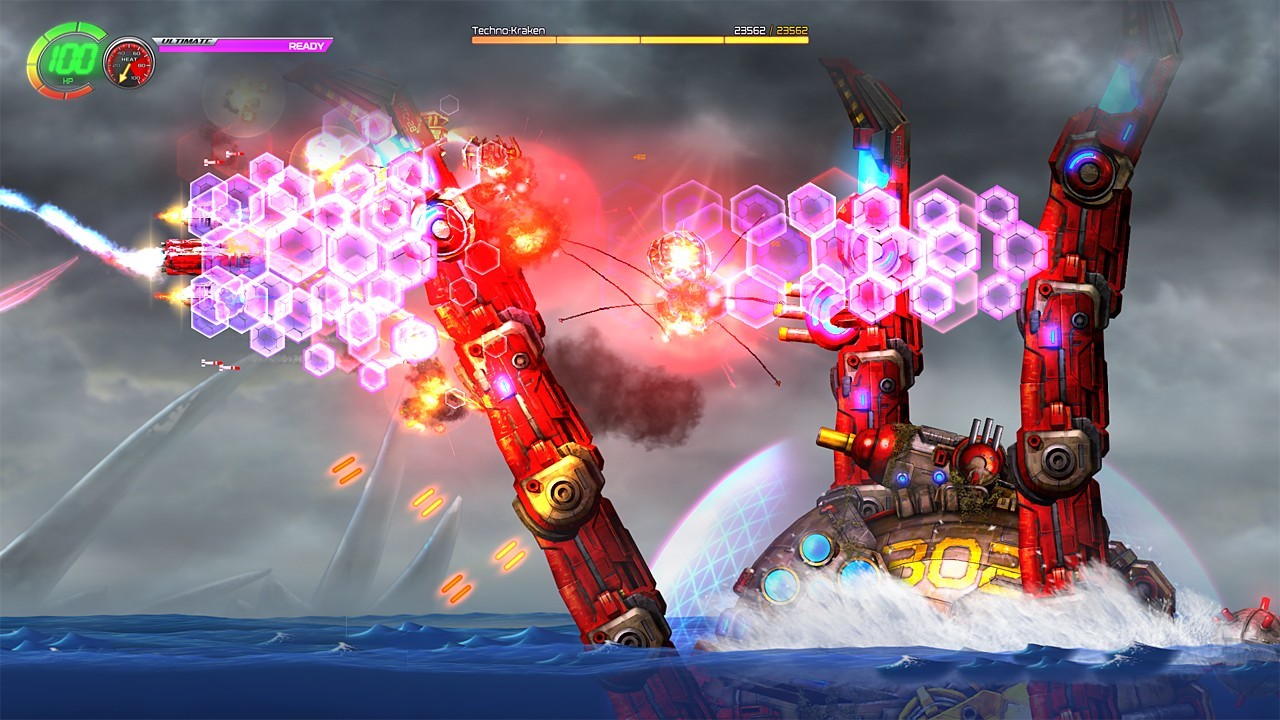 Jets’N’Guns is a marathon, not a sprint. Even if you have the money, you need to invest it wisely and figure out what works for you in play style before maxing out anything. The Daisycutter might be the most natural fit for a gun (being the starting weapon and all), but I don’t think you should upgrade it right away: it generates more heat than the starter ship can handle. Learn to invest in the special extras available on the main screen, like gambling on your own success (being picked as killer of the month can be a serious cash get!) and learning how to use the Mastermind-style hacking tools to get into the abandoned cargo that you find. It isn’t always worth the price of admission, but it can be. Moreover, be patient: what you see in the first mission will not be the entire catalogue of what you can buy. By the fourth mission, you’ll see better and better stuff appear, and you’ll have the money to buy it if you waited. Although, you can’t just squeeze your pennies and pray for a rainy day: you need to be able to buy, use and sell, because the starter guns aren’t going to get you anywhere. No, seriously: the developers have even said that you can’t get very far unless you buy stuff because that’s how the difficulty scales.

As a result, I’m a little torn about the overall effect of Jets’N’Guns. On the one hand, the musical soundtrack is pretty rad, a nice blend of electronic and metal to give that proper “Rusty Space Shooter” kind of mentality, and there’s plenty of satisfaction in swooping in when you’re strong enough to beat heads. On the other, since you only get bonuses upon level completion, I feel like starting out means needing to do the same places over and over again, and it can be frustrating. The level design sometimes means not understanding what is part of the background (you can sail right through it) and what’s foreground material (you’ll damage your hull crashing into it). Enemies have no sense of self-preservation, so kamikaze approaches are common and result in the most damage. The checkpoints are close enough, but also don’t repair your hull on respawn, meaning if you hit the checkpoint with only 10% integrity you’ll come back still on the brink of death. Plus, I feel bad that so much effort was put into the cool, comic-book style storytelling, because I’m not really here for a story. Personally, when it comes to shmups of all directions, I don’t need a reason: survival is reason enough to play.

Still, Rake in Grass wanted to make this early incarnation of Jets’N’Guns available to Switch owners for a twofold purpose. One, to allow gamers of the early 2000s to bask in a game that was and is arguably well made, and certainly has a nostalgic attraction to the right people. Two, to let players know about the sequel which was released 15 years after the fact, and also coming to the Switch presently. If you want to enjoy a decent horizontal shooter with some good facets, plenty of versatility and a vertical difficulty curve, you may just find enjoyment in this particular field.

A good looking horizontal shooter that’s a bit hard to handle, but ultimately attractive to both nostalgic players and hardcore shmup enthusiasts.