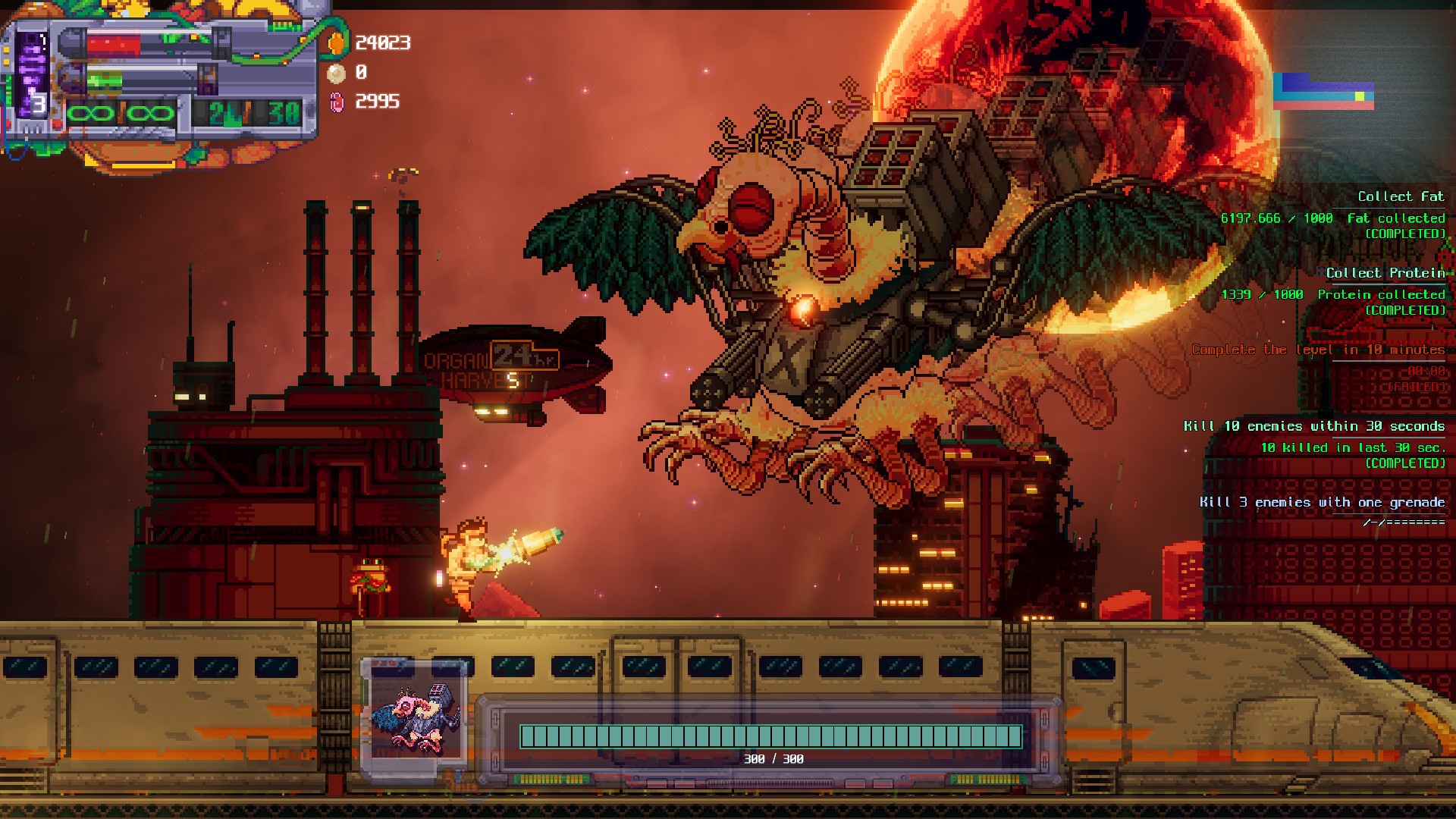 I’m a huge fan of run and gun retro style games such as the Metal Slug series and even Contra back in my youth. Bite The Bullet has stormed its way onto PC, Xbox One, Playstation and Nintendo Switch and follows the same premise with a slightly different spin on things. You’ll have probably noticed a huge barrage of 2D shooters on the scene at the moment, the trend is all about them right now so it is handy to know which will get the most bang for your buck so to speak. Bite The Bullet is developed by Mega Cat Studios and published by Graffiti Games.

Bite The Bullet is set in the distant future where mutants have overruled planet earth. You’ll be in control of a hench looking bloke looking to save the planet from these beasts and bring about some normality to civilization. What is strange with Bite The Bullet though, is not only will you be intent on slaying these mutant beasts, you’ll also be eating them as they are stunned as well. By consuming them, you’ll gain more power and become stronger as you work through each level. Have you ever witnessed a game being described as run and gun and eat? Well, this will be the first as this is what makes Bite The Bullet unique in its own right. I’ve noticed several of the roguelite RPG shooters are attempting to think outside the box and introduce something that makes it original and different to play, and this title certainly succeeds in the point of view. 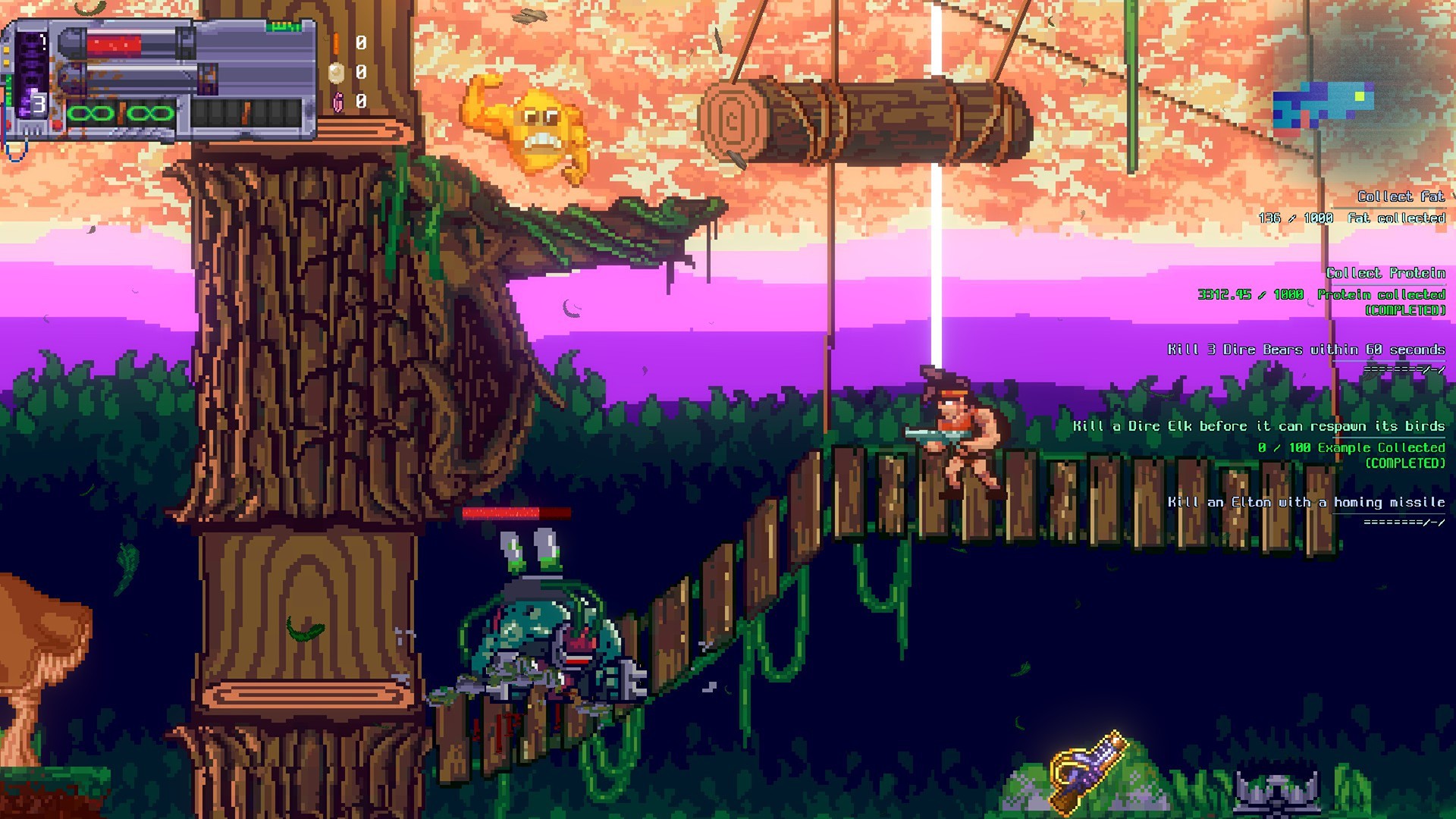 Now if you have played titles such as Metal Slug you will be familiar with the left to right scrolling shooting style in Bite The Bullet. You will encounter a plethora of differing enemy types such as zombies, robots along with gigantic mutant bosses at the end of levels. What really makes it interesting is that the game boasts the ability to customize your weapons and cherry pick power ups from a skill tree. This modernises the approach of the game even though graphically it cries out echoes of the Sega Mega Drive and Super Nintendo era. If you’re not a fan of retro style indie titles, then this may not be for you, however, I don’t think gamers should dismiss a slice of the past and titles like this will always have some appeal.

You will have the ability to carry two weapons, but will start off with a standard rifle, which used wisely and with strategic positioning in mind will fend off enemies quite well. You will be able to collect dropped weapons from the ground and also the potential to upgrade these as you progress. This allows you to always keep your beady eye out for something better than you’re already carrying. Combat I found to be immensely satisfying, fast and frantic, and the added incentive on consuming enemies I found a welcome addition. Graphically the game does as it is intended and has some fantastically designed enemies and backdrops with useful blends of colours. The menus are a severe eyesore though, and extremely cluttered to the point where they are confusing to work through and navigate. I felt like a little tidying up here would have been a huge plus for the overall presentation of the game. 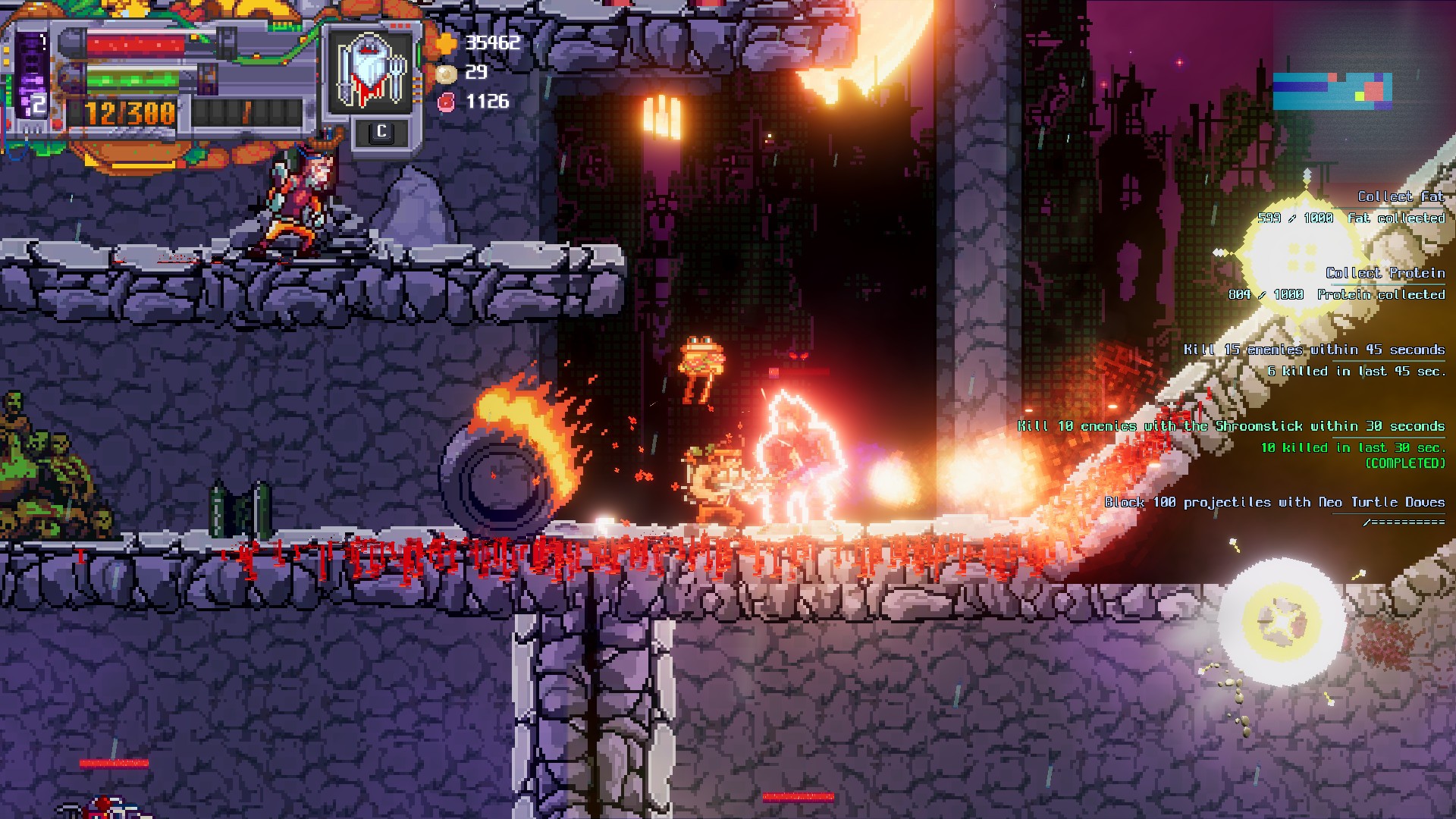 Bite The Bullet has a story involved, which isn’t particularly deep, but holds some structure and is interesting enough to be invested in. I found that on my first play of the game that I was sucked into the unknown of where the level was going, how my character could grow from eating enemies and what variety of weapons and skills I would develop. There is a real sense of intrigue to keep going with Bite The Bullet, though it can get very repetitive very quickly. There are some elements that will keep you interested such as how powerful the weapons are, some of the upgrades will obliterate an enemy meaning you won’t be able to have them for dinner. Whereas a quick weapon swap will be enough to stun and eat them. You don’t want to eat too much as this will affect your stamina and speed and not enough consumption will leave you with a lack of power. Learning how to balance these elements was almost a game in itself, however, it was quite fun and not a burden on the overall gameplay experience. As for the skill tree, this allows to adjust the effect the consumption has on your character. There are four classes to choose from at the start. There are also unlocks to toughen your character and add additional abilities.

There is a lot of gameplay here in a huge array of 50 levels along with additional quests along the way to rack up your experience, for those hungry for a big session of stuff to do then this is well worth a play. You may have played Carrion recently which is also about consuming people and growing. If you enjoyed that then I’d recommend this. I would say it’s a good addition to a collection of retro style roguelite RPG shooters and if you’re a fan of them, then don’t dismiss this one. You can almost forgive its cluttered menus and frustrating use of text across the screen for its side missions, but overall it does nothing mechanic wise that hasn’t been done before. It would be a great pick up and play experience for the handheld generation of Nintendo Switch players, but a more casual playthrough for hardcore gamers who thrive off triple A titles.

Bite The Bullet adds to a long list of similar titles in the genre, but this time you’ll be eating your enemies along the way!