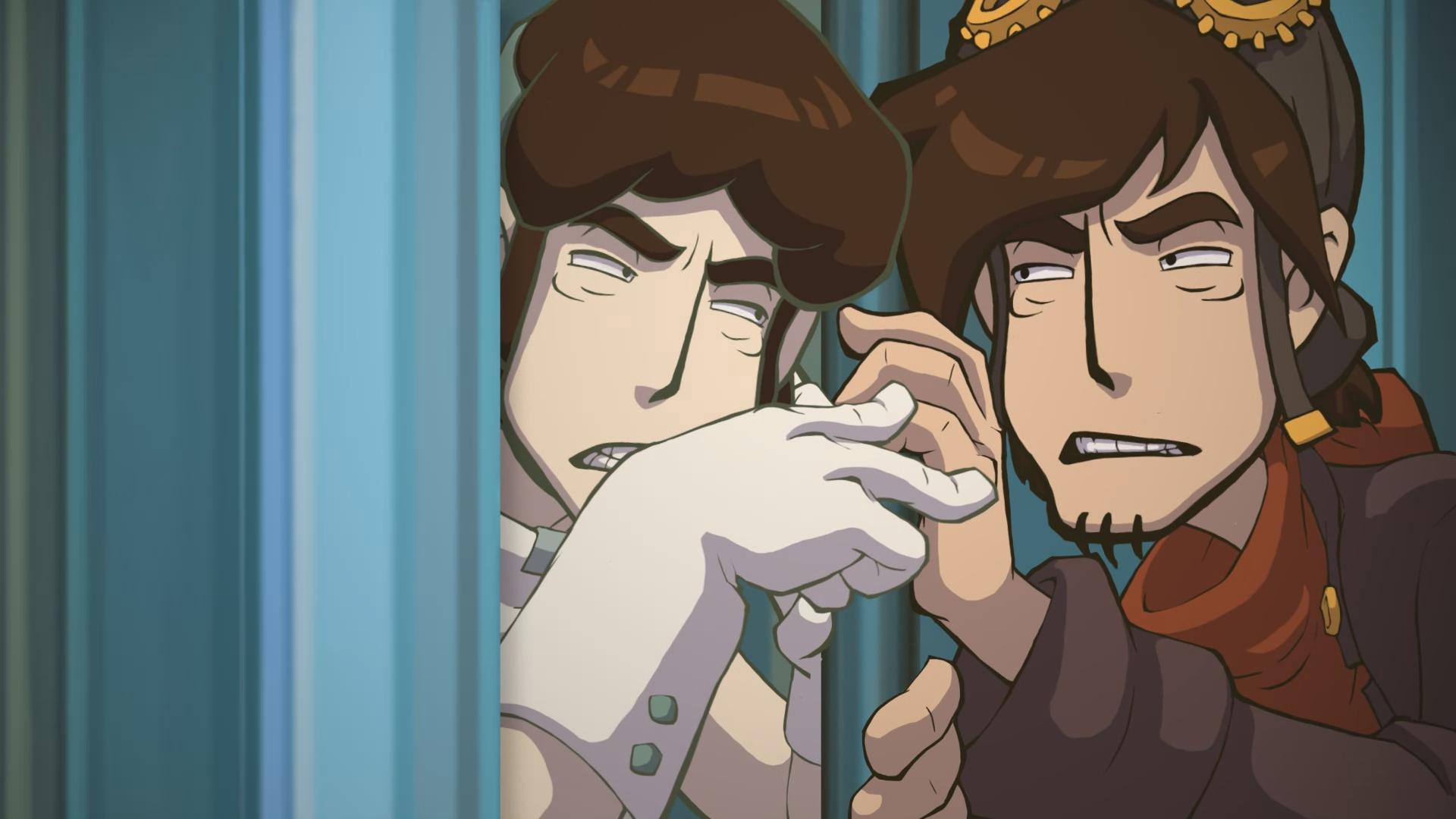 It amazed me how the “Chaos” in Chaos on Deponia is the noun, adjective and often verb of this hilarious point-and-click adventure game.

Chaos on Deponia takes place after the events of its successful predecessor, Deponia. Our protagonist Rufus returns to try and fix some of the mess he inadvertently created. Up until the point of Chaos on Deponia’s beginning, Rufus was on a quest to rescue Goal – a lady from the elite utopia world called Elysium – who has had the unfortunate luck of landing in a major conspiracy that seeks to completely destroy Deponia and its inhabitants. Goal, however, doesn’t posses a brain like humans. She instead has an implant which keeps a cartridge that stores her memories. Even more unfortunate for Goal, this got damaged in a confrontation with the bad guys: the mechanical-bearded Organnon and their little jerk of a helper…a.k.a her fiancé, Cletus! I know, I know. This is all a bit much to take in all at once, but trust me, it gets crazier.

Chaos on Deponia starts off with Rufus recapping the events to a freshly conscious Goal while exaggerating his own heroism, I might add. And true to the game, Cletus shows up, one thing leads to another and Goal ends up unconscious once more. Working with his ally, Doc, Rufus now has to do what he can to save, restore and convince Goal of the danger her fiancé poses. This is easier said than done especially now that Goal’s personality has split into three versions of herself – Lady Goal, Baby Goal and Spunky Goal. Rufus now needs to somehow convince all three Goals to help save Deponia and its equally chaotic inhabitants. Can Rufus finally become the hero that Deponia and Goal need? And that, ladies and gentlemen is the simple version of Chaos on Deponia. Now that we’ve got that out of the way, we can get into the review. 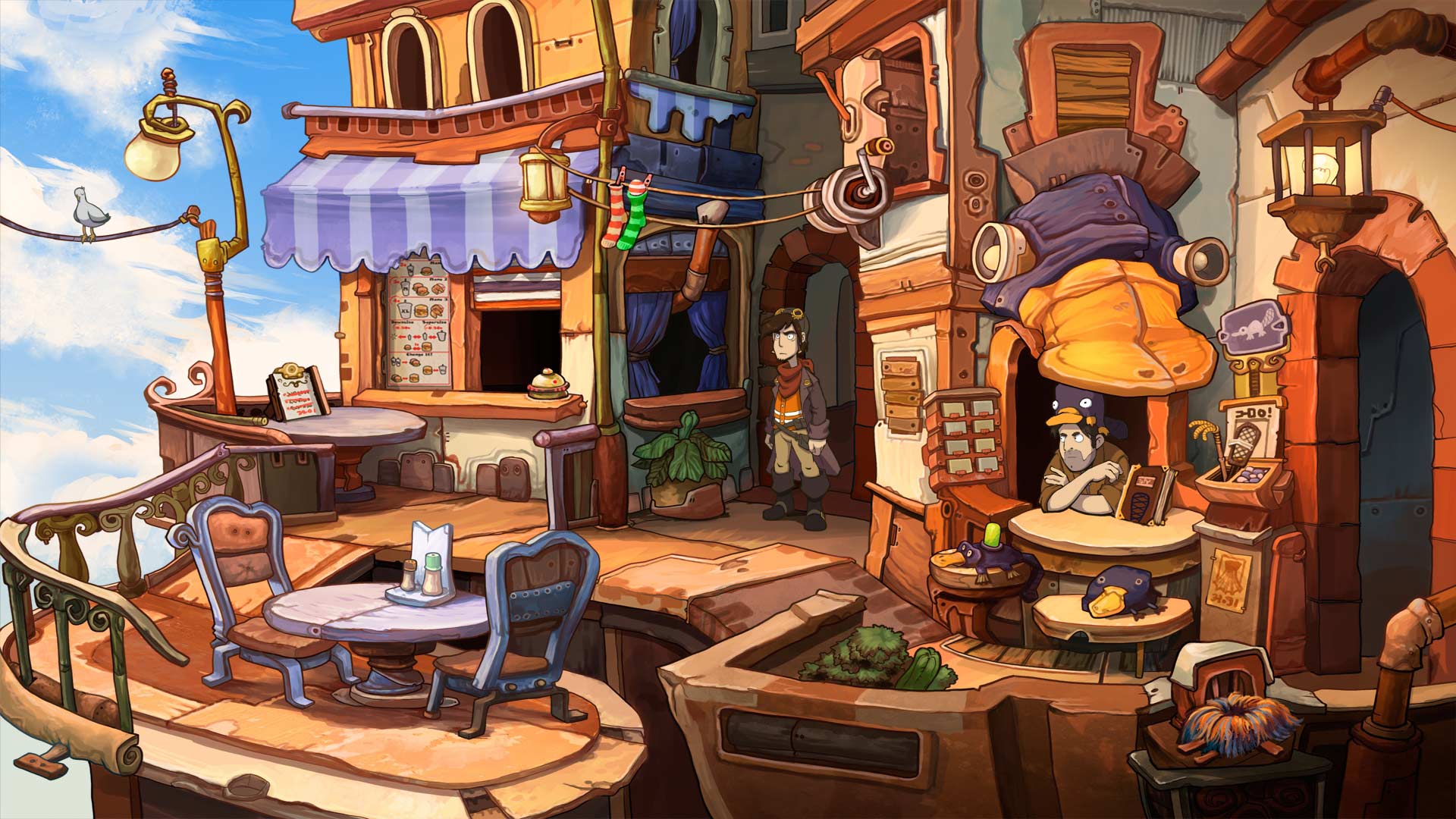 It would be hard to picture that Chaos on Deponia is played as a point-and-click adventure title with all its rich characters, visuals and plot. Daedalic Entertainment has done a superb job of crafting a point-and-click game that offers so much room for players to fail and make matters worse. With each “point,” players will get two to three options for interaction: Examine further, tamper with or take and talk. Depending on what you choose, you will never really know what the outcome will be until it’s too late. There is a crafting system in place for you to combine the objects you have acquired (sometimes legally) and create a new item to be used to achieve some task, bother others and even save your life. There are also a number of mini-games that you will play in the main story line quest and a fun fight scene to enjoy. Despite its simple approach to gameplay, Chaos on Deponia will occasionally throw in some challenging puzzles and missions but are totally doable because Rufus doesn’t give up…

There are even more options when it comes to conversation with other characters in Chaos on Deponia. You can let Rufus interact with others in the game however you feel, but as you unconsciously become Rufus you will most likely be inclined to be true to our protagonist, leading to some of the funniest banter I have ever come across in a game. From sarcasm, arrogance and even just plain old stupid, there is an option for everyone. The playful conversation in Chaos on Deponia is made more insane by the outrageous cast of characters. From an “androgynous” fisherman, a blind “pharmacist”, a not-so-subtle underground Organnon resistance, and even a professional rock-paper-scissors player who refuses to play a match with you until you achieve “tournament fingers.” I loved the interactions between the characters and Rufus who is probably ranked higher on the insanity scale than these folks. The fourth wall is occasionally cracked but not necessarily broken throughout the game. 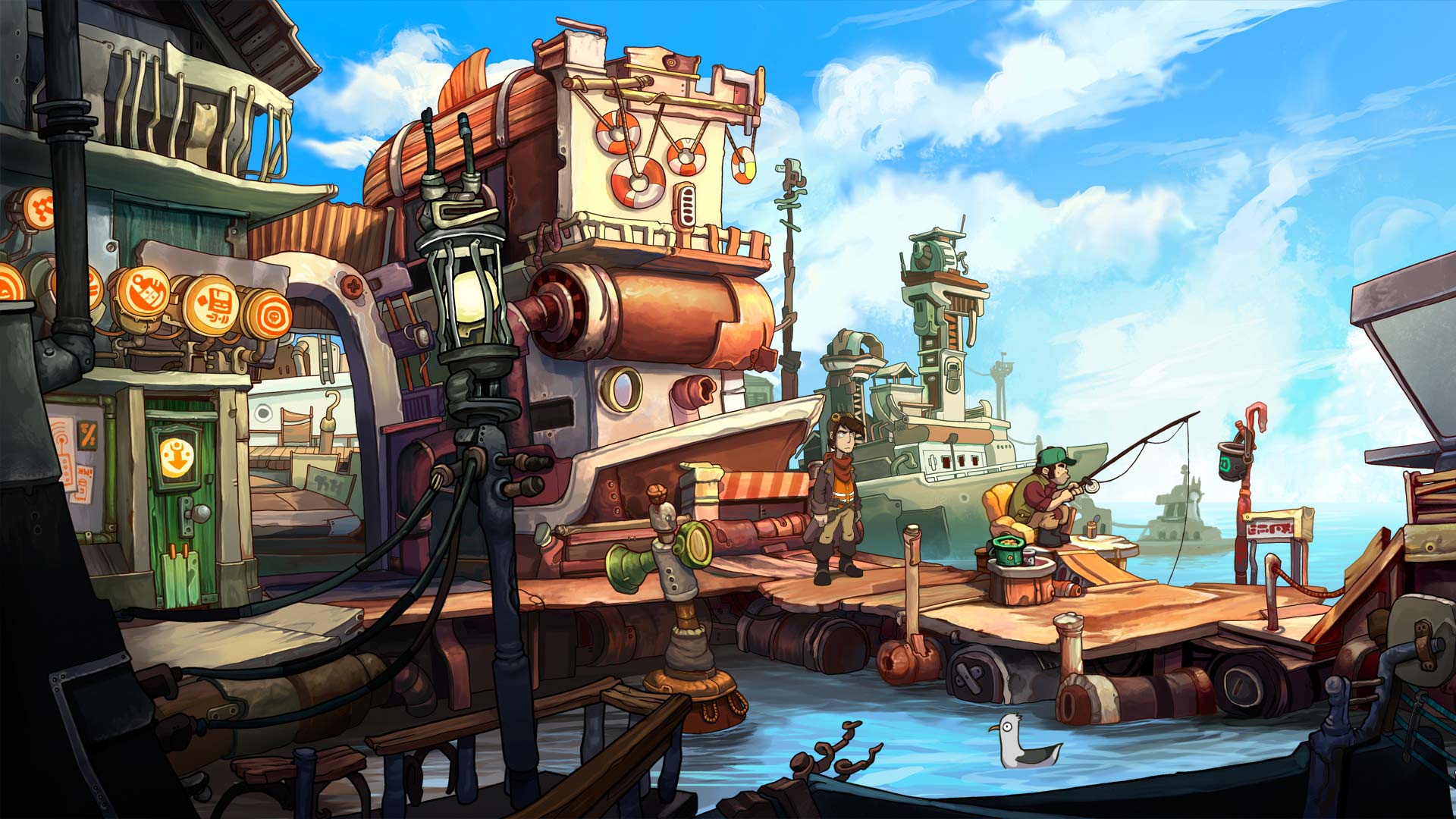 The world of Deponia is what I would call a great attempt at the concept of organized chaos. And noting that it is a town that has been converted from a landfill site to a habitable world with its own “normal” population. It has been beautifully brought to life with great detail and character by Daedalic Entertainment. Form dark alleys to dingey taverns and Doc’s workshop, every place in Chaos on Deponia has character and the more you play, the more you’ll want to save this undeclared loveable madhouse. Shoutout to the bard who gives the most “enthusiastic” accounts of Rufus’ journey and also to Rufus’ self-composed soundtrack: Dada-dada-de-dum-dum-dum-da. A highly recommended game with lots to do, tons of laughs and a heartwarming story at its core.

Chaos on Deponia is an amazing and memorable sequel filled with hilarious conversation, crazy characters and a protagonist who is at most times his own worst enemy.