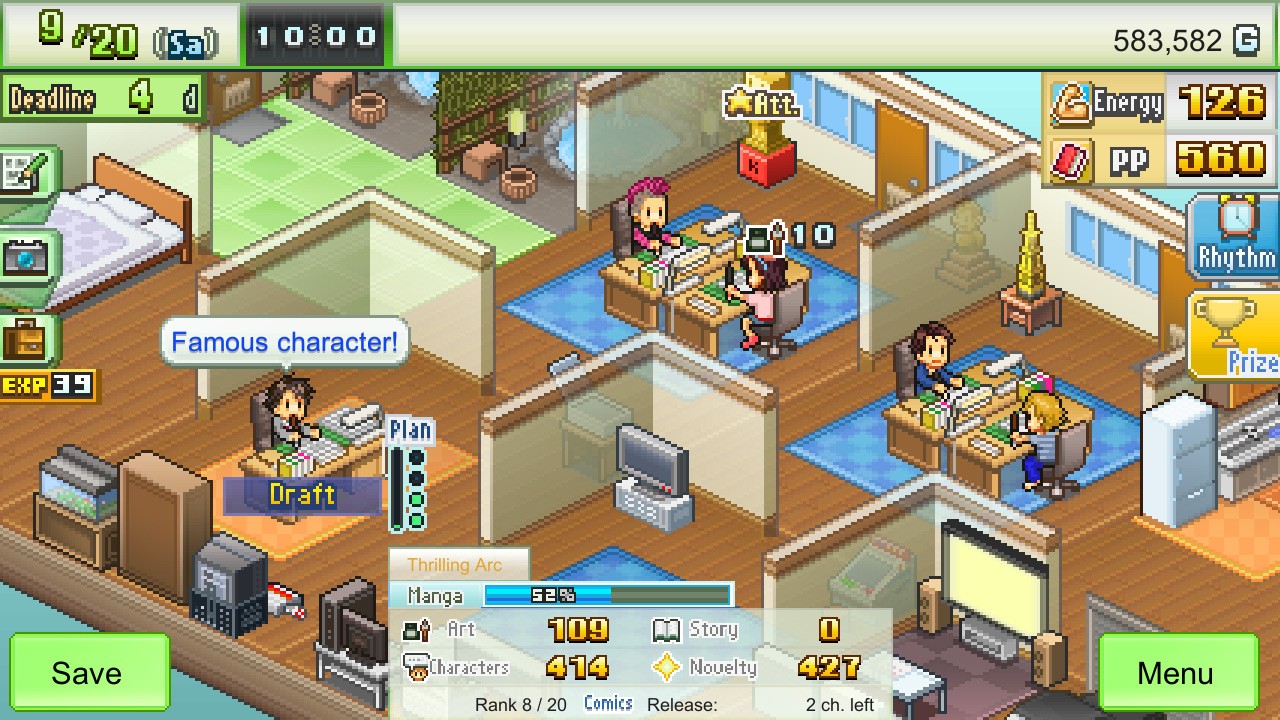 Years ago, when I was first starting out with mobile gaming on my Android devices (original Nexus 7!), I fell in love, wholly, with a game called Game Dev Story. The flagship title from Kairosoft, this simulation/time management title was such an addictive experience that put you in the position of an up-and-coming indie studio trying to make it work in the world of big gaming and the ever evolving landscape of consoles. I enjoyed it so much that I was eager to play it again on the Switch when it got released a while back, and it was still the same fun journey as before, though it felt a bit wonky all stretched out. Kairosoft, naturally, continued and continues to put out new titles, but the scope of things have changed a lot. To be honest, needing to manage a town, a hotel, or a massive fantasy village is really taking and takes tons of consideration: while the fun still exists, it’s a different flavor, one that takes too long to properly savor. I like picking up and putting down games the same way I hug stuffed animals, cuddling some longer than others but ultimately a quick squeeze is enough. Also, I’m a Japanophile at heart, so things that resonate most with the culture tend to sit best with me. So it’s no wonder, therefore, that Manga Works is probably my favorite Kairosoft game to date.

If you’ve played any of the Kairosoft titles before, you already know what you’re in for with Manga Works on a very, very basic level. A lot of cute avatars with the same general humanistic design that we’ve seen in all the other games, some jaunty but mostly forgettable background music, and the option to save your game over and over again, every second, without a moment’s hesitation. The vessel to move forward this particular journey is the solitary mangaka, the would be artist, storyboard designer and concept creator in the wild and vast world of Japanese comics. You dream of one day being a great and successful persona, known throughout the manga world as a master of the craft, but we all must start somewhere, and, in this case, it’s a single room apartment with a futon on the floor. But you’ve got spunk, you’ve got gumption, and you thankfully don’t need to worry about food or rent in this game to the same degree as others, so set your signs on honing your skills, getting your foot in the door and escalating all the way up the manga chain. Who knows? One day, you might get awarded the grand prize and enter the halls of greats like Tezuka Osamu or Akira Toriyama! 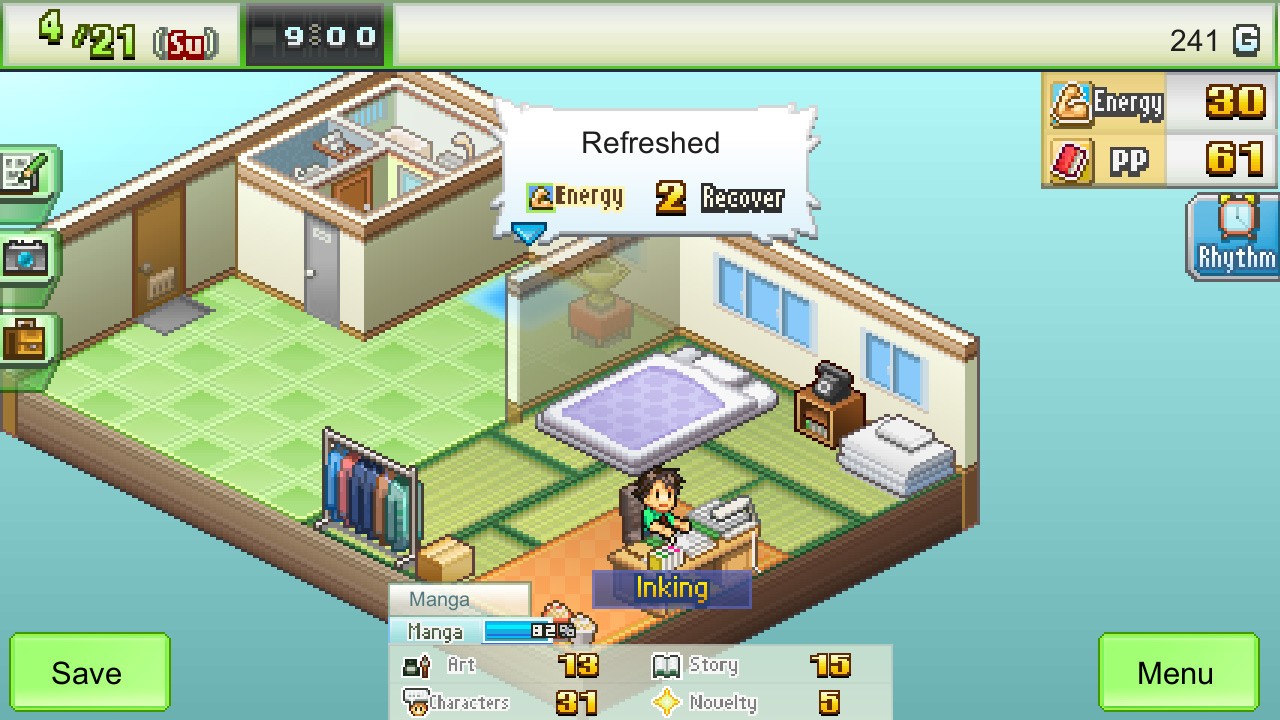 Much like Game Dev Story, Manga Works is wholly focused on the creation of a singular project: once you get to work on a manga, that’s all you’re doing. And I mean YOU. Unlike most of the mangaka of the modern era, Manga Works really puts things in a classic perspective in which you and you alone are the one to shape and craft this new comic to help draw in the hearts and minds of people all over Japan (and maybe the world!). By the time you eventually add more people to your label, you’re so widely established that the focus is on your first character and not, say, on the “brand” that you create. As a result, the pressure to create and the influences that you have are very real, and very much central to your character. Unlike other games from Kairosoft where you develop favorites amongst other designers/footballers/race car drivers, the character you create from the beginning is the one and only that you care about moving forward (sorry, line tracing interns). So when you decide to spend money to train the artistry or work speed of your artist, all your eggs are going into this one basket. If your mangaka isn’t getting enough rest or has too much on his/her plate at once, you’ll end up in the hospital and the whole of your career will have to pause until things are better (which reflects the real life perils of up and coming artists quite realistically). It can be rough, because, of course, you want to succeed and get more accolades, but it’s a slow road.

Also, it’s an interesting one that, ironically, shows more realism than I think was intended. For example, Manga Works asks you and invites you to try out a variety of scenarios in order to see what works best in publication. So a rival story (perfect for teen boys) set in a stadium (perfect for teen boys!) will work really well, but a ghost story (so-so for girls) set out in the open sea (ideal for older men) might not land as hard with target audiences as would be expected. Still, if you’ve got the stats high enough and strong enough, you can push nearly any concept and the whole thing will work out swimmingly. Again, you’re just the artist, not the publisher: after you get your manga created, you still need to take it to different labels and agencies and peddle your wares, trying to get someone to take interest in your comic. Sometimes you get the door in your face and you just gain experience from the effort, but, occasionally, it’ll be appealing, and you get to see your name in print as the comic makes a several thousand print run for fans to gobble up. Hey, you might even get a rookie award, some pocket money and recognized by other studios!

Then the pressure can really start to set in. For Manga Works, you’ll get approached (once you’re recognized) to do one shot manga and get a bit of money for your trouble. If you’ve already got something in your catalog of completed manga, great, no problem, publish and forget. But if you don’t, now you’ve got to knock something out fast, and failure to deliver means you lose feasibility in the eyes of this label. So you spend tons of time trying to get things out faster, keeping an eye on your PP meter (which is your productivity and energy) as it roller coasters along throughout creation. You need to rest, you need to take vacations, you need time to yourself to recover between creations, to inspire you and unlock new ideas for scenarios, genres and characters, and you need money to improve your home, give yourself some much needed home balance, and to live. It can honestly be so unbelievably stressful at the beginning because you don’t want to crash and burn before you’ve even left the hangar. You will probably end up putting your character into the hospital, and that can honestly be damn scary because I’ve never had a Kairosoft game straight up kill my character, but I never know when the script gets changed. 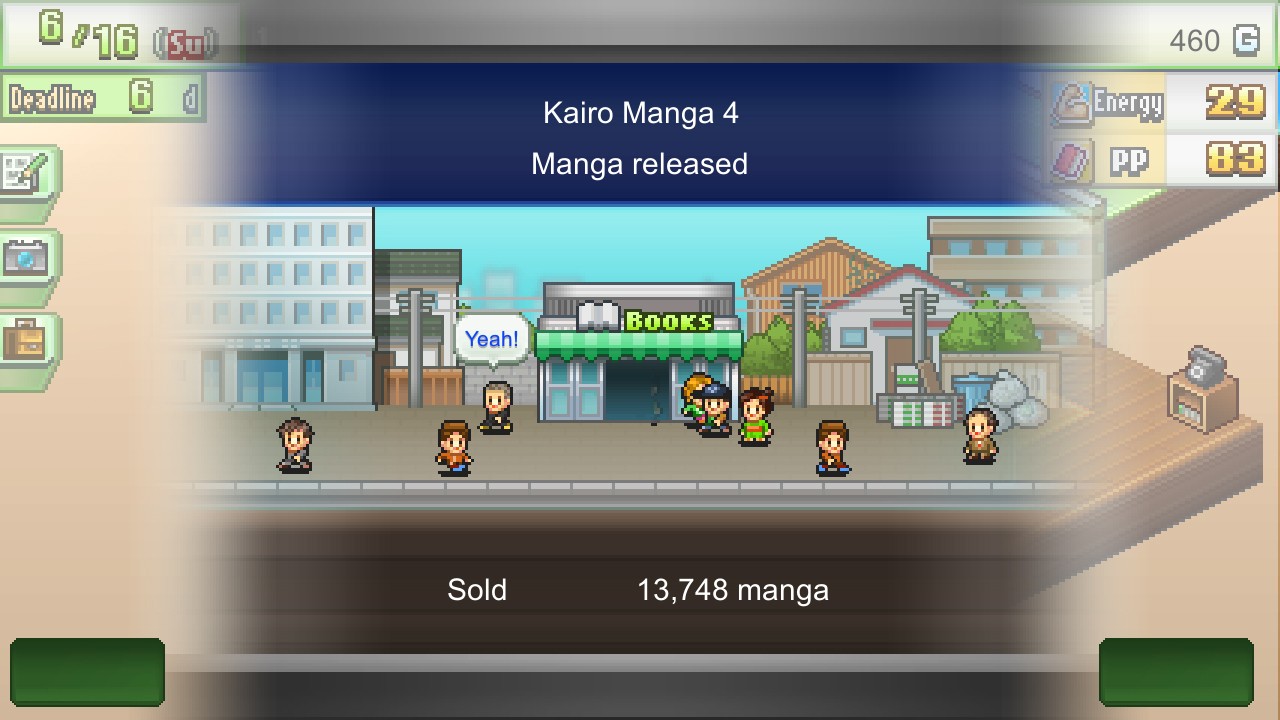 But then things get better. You move into a bigger house, you have more success in turning out projects over longer periods of time, you get to hire some people to carry a bit of your workload, your art and your story stats go higher and higher as you put in the money and time for training and trips to see more of the world, and you elevate. Manga Works is sort of a dream situation for many would-be mangaka, but that doesn’t make it wrong or impossible. It’s a great sort of game where you can actually achieve this rank where you just decide, one day, “I’m going to make a ghost romance comic set inside a jail” and it sells well. It’s why Kojima can make a game where Norman Reedus having to pee is SUPER important and everyone just goes along and praises him for it. When you’re a respected artist, you can do anything you want in terms of genre and expectation bending, and Manga Works is no different. It’s fun and exciting to try things, much like Game Dev Story, but I don’t have to worry as much about a brand new console sinking my current project or my lead developer suddenly filling the game full of bugs. You can hit blocks or have a bad print, but it’s only you who’s doing it, and, once you’re strong enough, you just shrug it off and keep moving because you are a well respected artist. Also, strictly speaking, you can just replace whichever grunt spilled the ink well without caring so much about the consequences. Hey, it’s not a perfect world for them, but it’s great for me.

Manga Works might feel like a step back due to the scope of other Kairosoft games, but I think it’s a wonderful step forward into the roots of what made the company great and what makes their games truly work and stay addicting. You take a great escapism concept, inject a bit of detachment in terms of consequences (you can’t actually die), but keep up the pressure and the atmosphere. You are the greatest damn creator ever, you’re more versatile than Ken Akamatsu, and you will make it onto the Mount Rushmore of manga. This is a great pick-up-and-play game with a ton of replay due to starting over and grinding it all out again (you can “beat” the game in about five hours), and it’s got all the charm, heart and appeal that Kairosoft delivers time and again. The buttons are finally mapping correctly, and I didn’t even think about touch screen controls since I didn’t have to focus on a ton of other characters: just the one. While not for everyone due to the limited range of concepts, I’d say Manga Works is a hearty and heartful addition to the simulation pantheon.

Kairosoft gets back to their roots by creating a simulation to appeal to their core fanbase, and the results are satisfying to a T.