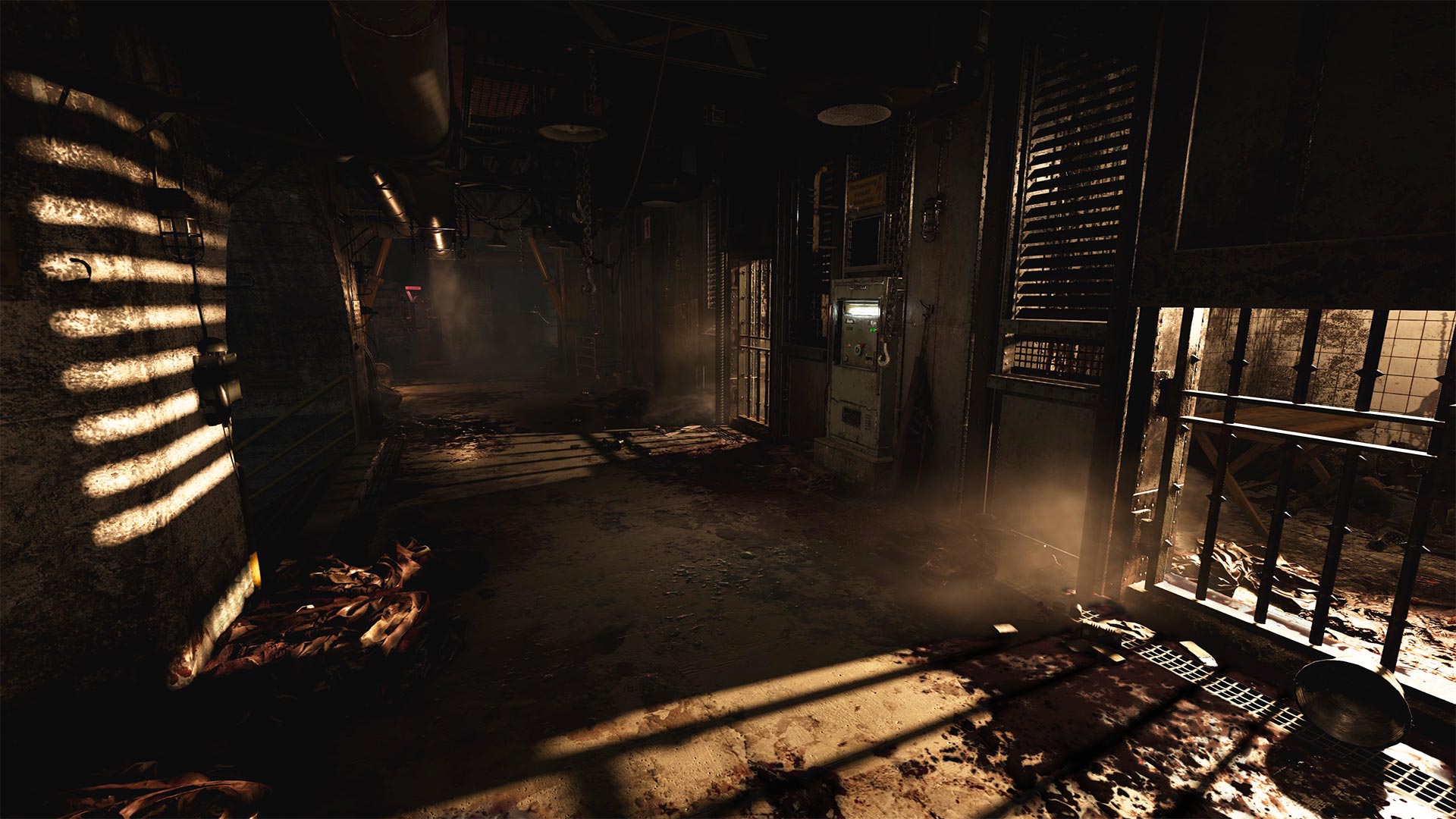 Back in the day, DLCs and Map Packs, used to be at the centre of negative attention. But with time, gamers world over have directed their negative thoughts at microtransactions, which were rapidly gaining infamy – at the time. And now in the year of our lord, 2018, nobody, is even remotely bothered with the idea of DLCs, as over the years they have become a crucial part of the industry. However, if a title has been visibly starved of content, in favour of a gimmick, or with intention of forcing the player to purchase any and all upcoming DLCs, then even today, those who are responsible of such tactics, are ultimately muddled with dirt. And Sledgehammer Games, since launch, were being attacked for the insignificant number of content which Call of Duty: World War II possessed. And some even went as far to accuse the developer of limiting the multiplayer experience in favour of fuelling hype for the title’s season pass, and the first DLC pack titled Resistance, which has just been released.

Unlike all the other DLC packs, for all the other Call of Duties, which came before it, Resistance doesn’t feature four core maps, but three. And while many were initially displeased with the fact that they’ll only be getting three all-mode maps, they’ve grown even further apart, when they’ve found out that one of these maps, is a remake of the Modern Warfare 3 classic map, Resistance. And while many are still up in arms about the amount of content which this particular DLC features, it has to be underlined that it should be judged not for its quantity, but quality, as in the end quality of the maps, is what truly keeps multiplayer alive. And in order to assess the true level of the Resistance DLC, all maps should be dissected individually, even the Zombie map, The Darkest Shore.

First in line, is the smallest map of the bunch titled Anthropoid, which takes place in occupied Prague. And while it may be a miniscule map, in comparison to the existing Call of Duty: World War II maps, it still features three active lanes, which intersect with one another. However, due to the map’s size, it is difficult to realise that in-game, as it is so tightly knitted together, that most won’t even noticed when they have switched lanes.

When it comes to Call of Duty’s most famous mode, namely Search & Destroy, it has to be underlined that Anthropoid, unlike the franchise’s best maps, heavily favours the attackers and not the defenders. The timing behind both points, is really unfortunate, as attackers can reach both bomb sites in under ten seconds, whereas defenders need over sixteen to reach point A, and ten – give or take – to take hold of point B. However, even if the defenders rush both the points, their line of sight can be easily smoked off. And point B is a literal death trap, as it has only two main points of entry, and the defending positions, are easy to predict. Meaning that a single pop-flash through smoke, can secure a site in seconds.

To put it bluntly, Anthropoid is a heavily imbalanced map, as no matter how one spins it, the attackers will always come out on top. And that’s because the layout of the map, always gives them a tactical advantage, and both points, can be easily secured, every time. And even if one lacks the mechanical skill to take on defenders one vs one, he/she can easily cut them off with a smoke, as Anthropoid’s small size encourages smoke abuse, which will without a shadow of a doubt be very common on this particular map.

Valkyrie is the second, and the last quote-on-quote brand new map of this particular DLC. And in many ways, is a complete antithesis of Anthropoid, as it is much larger, and in turn much more balanced, than its Czech counterpart. And due to the diagonal spawns, both attackers and defenders, start off of the same, equal position, and can reach both points within 10 to fifteen seconds. However, Defender’s approach to both points, is much more open, and gives them much more room to manoeuvre, meaning that they can defend both sites without being completely incapacitated by a single smoke. 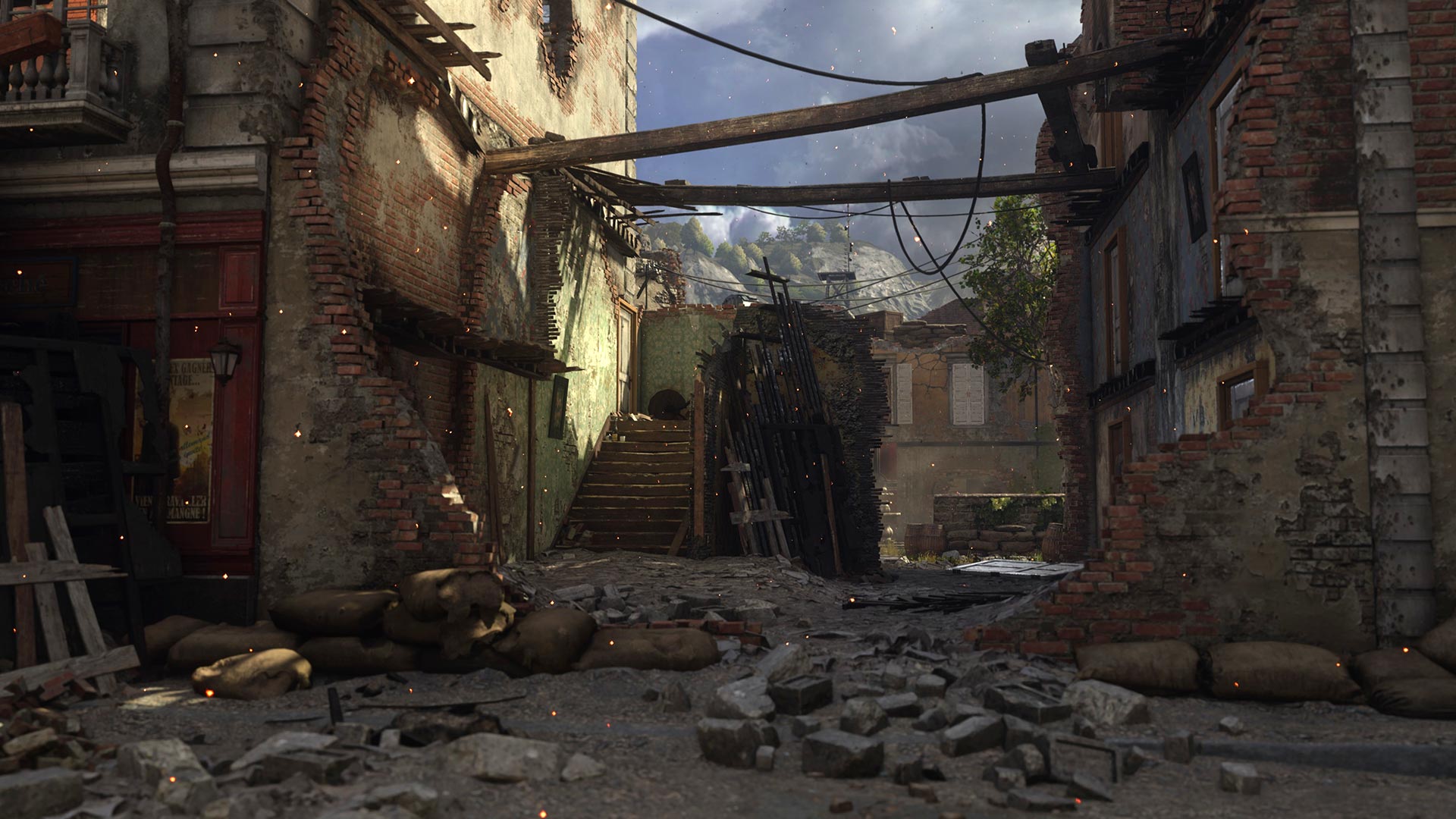 Wolf’s Lair, as Valkyrie is alternatively titled, is a much larger, and much more open map. And while it possesses three lanes, just like Anthropoid. They are much less defined and allow for an increased freedom of movement. However, if one prefers simplicity, he/she can face the opposition head on, as the mid-lane allows for sniper duels. But if one were to grow tired of getting constantly shut down by the enemy snipers, he/she can get on an LMG, and dispatch the opposing sniper with ease, as attacker’s LMG has a clear sight, on what is essentially a sniping nest, from defender’s perspective.

Ultimately, Valkyrie, is leagues above the aforementioned Anthropoid, and unlike the latter, it favours much more tactical, and level-headed team-play. And that’s because its size, and overall design, allows for methodical approach to each bomb site, and in-truth, any other objective, on any other game mode. It features a perfect balance between built-up and open sections, and it never favours, either side of the conflict. And is clearly the leading map for the entire DLC, as it showcases what Sledgehammer wants to multiplayer truly to be like. And while this vision may not align with all fans of the franchise, it has to be underlined that it might just be the best way going forwards not just for Call of Duty: World War II, but Sledgehammer as a studio.

The third and final map is titled Occupation, and as mentioned above, it is a remake of the Call of Duty: Modern Warfare 3 classic, resistance. And in truth, it is the best map of the bunch, as it highlights the high points of the franchise, and Infinity Ward’s excellence of level design. It takes attackers between eighteen and twenty-five seconds, to reach either of the bomb sites. And while those times may not seem as much, it has to be underlined that it takes defenders just under five seconds to reach both of the sites. Meaning that the defending team can set-up on both bombsites, before attackers even gain a line of sight on either.

Occupation, follows all the pre-established norms of the Search and Destroy mode. It allows defenders to easily set up, but in turn gives the attackers an upper hand post-plant, as once the charge goes down, attackers become the ones’ who are defending, and can apply same defensive tactics in the latter stages of the map, in order to hold back against defender’s counter offensive. This makes retakes an intimidating and gruelling task, as Occupation’s tight alleyways, and labyrinthian design is punishing for those who try to run-and-gun.

It could be argued that Valkyrie is the most accomplished map of the bunch. However, denying Occupation’s excellence would in that case be a crime. And no matter how one would like to spin it, there’s simply no denying that Occupation, is simply the best map of the bunch. And while many will be happy with that fact, others will feel short-changed, as after paying £11.59, for a handful of maps, they expect more than two rather average playing-fields, and one which they know all too well. And what makes this situation even worse, is the fact that nearly three months in, Call of Duty: World War II, still possess only three core maps, which is well – rather underwhelming. 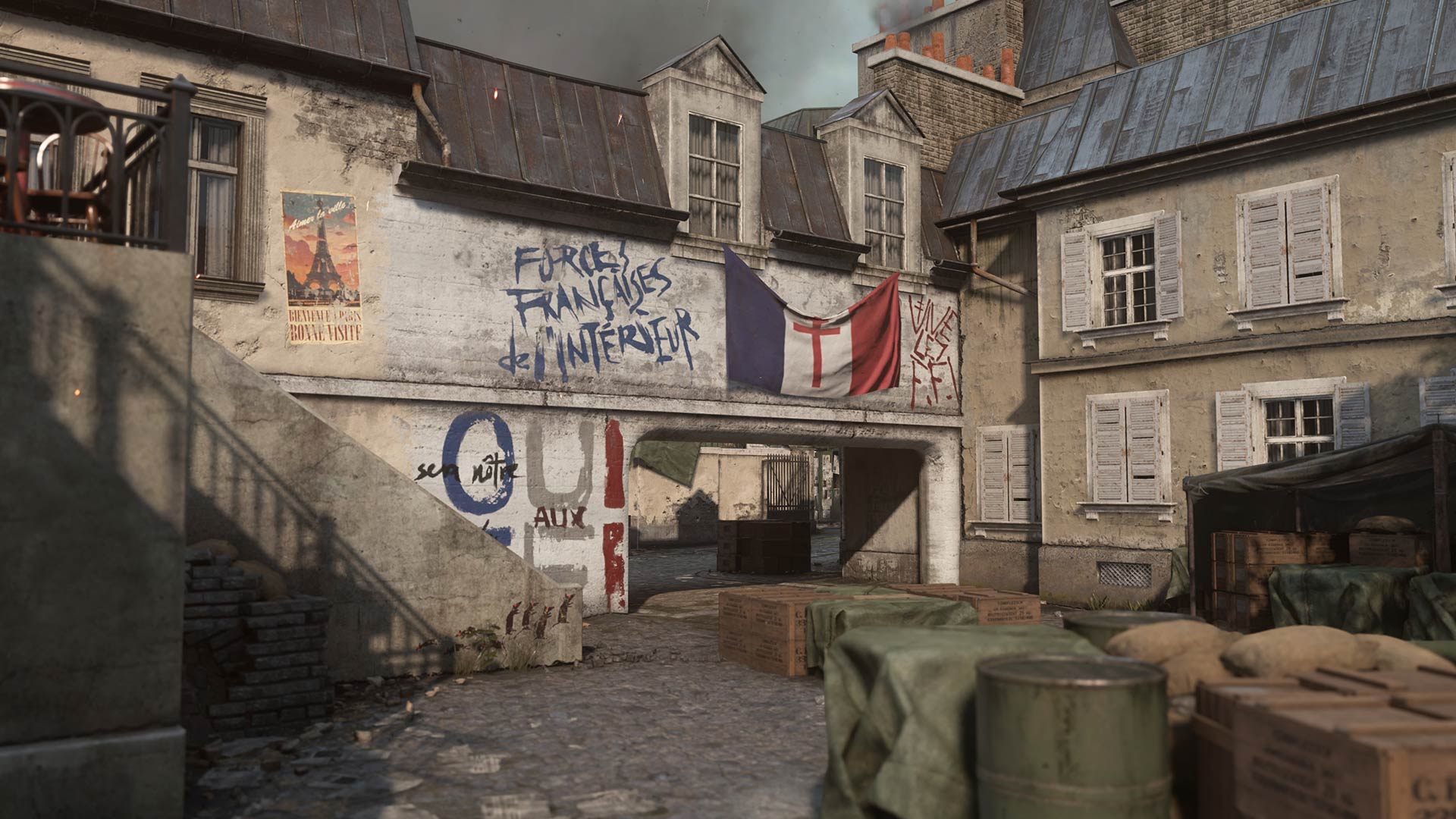 Rest of the Package

In addition to the core three maps, Resistance also features a War map titled Operation intercept. Which takes place in a claustrophobia inducing, urban environment, which favours short range weaponry such as shotguns, and submachine guns. And while many will be happy with the fact that they are no longer forced to use assault rifles, to hold long angles in war, it has to be underlined, that this is the only seemingly new addition to the mode, as otherwise, Operation Intercept is just more of the same.

Operation Intercept is divided into three parts, freeing the resistance informants, of which there are four, two at A and two at B. And they all can be freed with ease, and contrary to polar belief, they do not need to be escorted, as the portion of the trailer showcasing the escort portion of the title, is simply not featured in the final version. One attackers are done holding square, they are then instructed to destroy communications equipment, just like on operation Neptune. But in this time round, there are 25 pieces of equipment to destroy, instead of just ten. And once one is done shooting radios and transmitter, he/she is then instructed to escort yet another tank, just like in Griffin and Breakout.

In short, Operation Intercept, is rather underwhelming. Yes, it introduces a new dynamic to the mode, but once one gets to the core of the map, it is easy to realise that it shares many similarities with Operation Neptune, when it comes to its fast-paced, and explosive gameplay. And while there is some variety, which the War desperately needs, it is simply not enough, at feels like, Sledgehammer has cut a lot of corners just to hastily release this map in time.

Corner cutting, is ever prevalent when it comes to the Resistance DLC. As even The Darkest Shore, the brand-new zombie map, is not devoid of it. Yes, it is incredible, and at times utterly haunting especially when the fog rolls in, and takes over the bunkers, and the mountain approach. But besides the white screen overlay, The Darkest Shore is still more of the same. Unlock all doors, create a wonder weapon, complete the easter egg. Sledgehammer’s formula is stiff and unbending –  to a point where even the special enemies are the same. Yes, there is a new large, spider like enemy, who jumps in and out of the fog, but for the most time, players will just run in circles shooting the game brutes, bomb carriers, and every couple of rounds the decaying sprinters.

There is no denying The Darkest Shore’s eerie and sinister beauty, there is also ne denying that it is leagues behind Treyarch’s creations, and even Infinity Wards’ zombie works such as Zombies in Spaceland. There is little improvement upon the established formula, and while many will appreciate the amount of work to create this rather breath-taking maps, others will denounce it for the lack of new enemies, and other additions.

Ultimately, The Darkest Shores, works incredibly well as an analogy for the entire pack Resistance DLC pack. It is a competent, and fairly entertaining package, but it does very little to improve upon what already has been seen. And there is no denying that content wise, it falls short to what was on offer last year, when Infinity Ward was working on Infinite Warfare. And while some could argue that the items held within the resistance event can be seen as a part of the DLC. It has to be underlined that they are available to all, in the same capacity, regardless of the DLC or Season Pass ownership. Meaning that those who shell out their hard-earned money on the Resistance DLC, ultimately get less than they have bargained for. And it is rather unfortunate, especially for those who were expecting to receive ever new items, just as they did with Infinite Warfare.