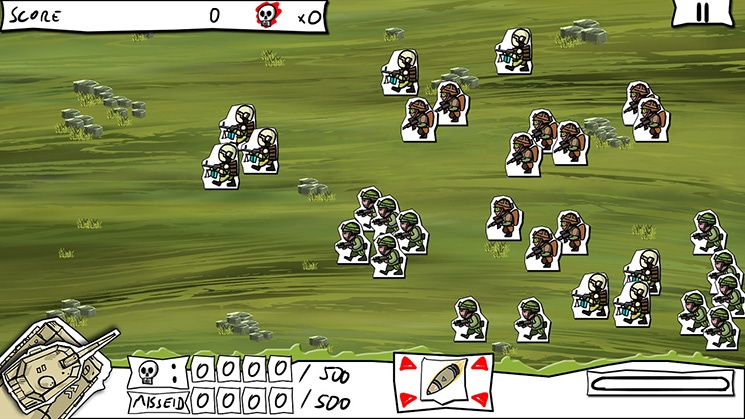 War is never a good thing. In fact, in real life it is easily one of the most horrific experiences that anyone can go through, whether you’re caught up in it or fighting as a part of it. However, on paper, war can actually be good fun and this has never been more apparent than in Paper Wars: Cannon Fodder Devastated, developed and published by Bloober Team/iFun4All; out now on the Nintendo Switch.

This remake of Paper Wars: Cannon Fodder, which was originally released on the Xbox 360, PSP, Wii and android platforms, has been fully remastered and now contains a survival mode and three campaigns: the classic, winter warface and, new and exclusive to the switch version, zombie warz. Its style of gameplay can only be best described as a tower-defence type of game. However, don’t get put-off or too caught up by this description if you’re not a fan of this particular style of genre, as it plays surprisingly different from what you might expect it to. Armed with a lone tank, positioned in the lower left corner of the screen, it is your job to repel the hordes of invading forces that cross the battlefield from right to left. There’s no micro-management or building of different resources here, just plain old-fashioned annihilation on a particularly grand scale.

The graphical style of the game takes on a sketch pad appearance, with various doodles that are drawn on scrap pieces of paper. It gives the game a particular cartoon style that is neatly done and adds a touch a humour to the proceedings. It all looks aesthetically pleasing and very crisp, whether you’re playing it on the television or on the switch’s screen. In fact, the whole presentation of the game follows along this theme, with its various options and campaign levels all scribbled in a very hasty way, giving the game a certain a charm from the offset. 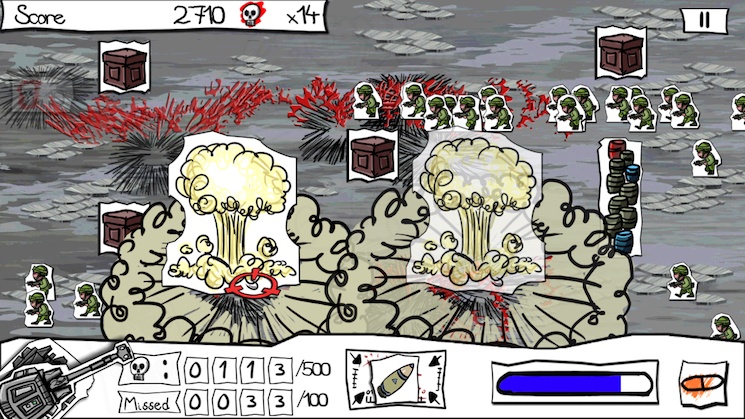 The core mechanics of the gameplay sees you aiming a reticule around the screen as you charge the guns of your tank. The longer you keep the A button depressed, the more power fills within the firing meter; the more you fill the bar, the more powerful your overall shot. This brings an element of timing into the mix as you need to make sure you release your shots at the right time. From the right hand side of the screen, battalions of scrap paper soldiers march their way across the battlefield at varying speeds. Using your reticule, you must launch your shells from your tank in order to prevent the enemy force from reaching the left side of the screen. It all sounds very basic and quite easy and, in essence, the mechanics of the game are relatively basic, however, the challenges themselves can be far from easy.

Unlike the majority of tower-defense games available, it’s not always necessary to stop every single soldier from making it across the battlefield. Each level takes into consideration the amount of soldiers that can fill your screen and, believe me, sometimes the enemy force can be relentless in their quest to reach their destination. Each level offers a variety in terms of whatever mission directives you need to accomplish in order to win the level. These can vary from defeating the enemy with a certain type of armament to only killing a certain type of soldier on the battlefield. As long as you follow the set of guidelines given to you, it doesn’t matter if some of the enemy soldiers make it to the other side; although you do need to keep that number under the threshold of a limit that the game imposes on you.

To help in your quest, various power-ups appear across the battlefield that can have different effects on the game. From mines, which create an explosion within a set radius, to frenzy which basically gives you a rapid fire capability and is particularly satisfying. You can even pick up timers that slows the enemy advance or even icons that forces them to retreat and even reset the counter of the amount of enemy forces you can allow to pass across the screen. With the use of these power-ups and the mission objectives, each level offers a lot in variation in its gameplay rather than the standard tower-defense formula used in many games of its genre. Each of the campaigns or game modes also offer slight variations to the gameplay with different settings and power-ups even though the core mechanics of the game remain the same. 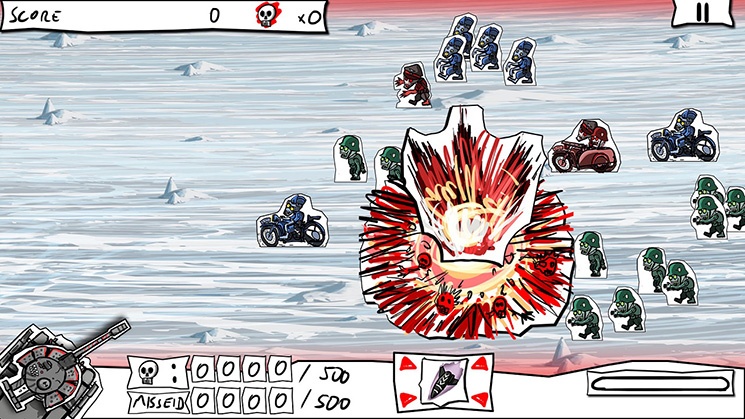 New to this updated version of the game and exclusive to the switch, is the inclusion of zombie warz. Again, the general premise is the same as the other campaigns on offer, although this time you fight off an army of invading zombie hordes. This mode adds a nice change from the usual military mayhem and is quite amusing in its variations of the walking dead. As well as the campaign levels, there is also a survival mode which tasks you with destroying a certain number of enemies before too many make it across the screen. Again, this mode plays the same in its general mechanics, however it does offer a rather stern challenge. Speaking of which, each of the campaign levels come with three difficulty levels with which to play them. This further adds to the challenge and replayability levels of the game; especially if you take into account that each campaign contains twenty-eight chapters and coupled with the differing levels of difficulty, essentially gives you over two hundred and fifty varying levels to play on. That’s equates to a lot of bang for your buck.

Despite its roots being modelled on the tower-defense genre, this game plays in a very different style from what you may expect. With an abundance of variety in each of the levels, as well as a generous offering in its content, Paper Wars is a game that may well surprise many of you. There’s something very satisfying in wiping out the large numbers of invading troops and with its varying missions and objectives, contains that special ingredient of just having one-more-go. If you’re a fan of casual games, then this is easily one of the best examples of its genre out there. It does have a couple of annoying features, such as the background music that is incredibly annoying and no option to turn it off apart from muting all the game’s sounds, but overall there really isn’t a lot wrong with this game. With so much variety and satisfying gameplay, this is a title that doesn’t lose its appeal with the more you play it and it certainly won’t be game that wears paper-thin.