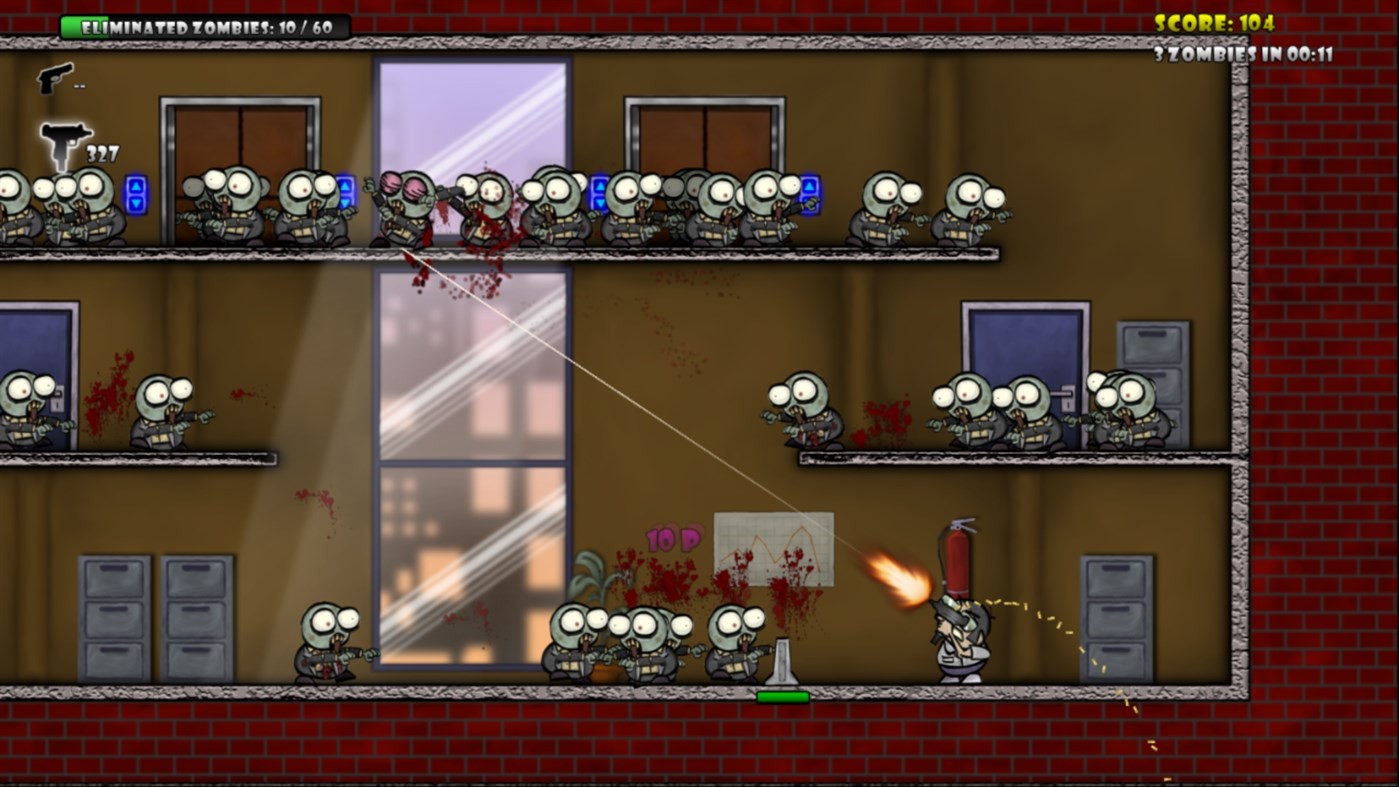 Arcade Twin Stick Shooters really are two a penny these days. If you take a look at any of the game stores, you will see developers of all standings trying their hands at the genre. With the market so saturated, it really is tough to find one that is worth investing both your time and money into. I took a punt on Mancebo Games’ Zombies Ruined My Day. Published by Rendercode Games, this title has you controlling one central character who is tasked with eliminating wave after wave of a zombie horde. You are armed with a selection of weapons, where you must plan your strategy to destroy your enemies, while ensuring that you don’t get bitten. A bite means game over, and your life as a human is cut short. Unfortunately, you will live out the rest of your days craving brains.

The concept of the game is very simple. You start at the bottom of the map, from here you will observe several closed doors, as they start to shake, a new wave of zombies will burst out. They slowly amble to your location, having to overcome any obstacles and walking across any of the fixed platforms. As they approach you, you must select the correct weapon to take them out. If you are too slow, another wave will begin, and you will now have more enemies to tackle. So forward planning and using the correct tools is essential. You are given a clear tracker of the goal of each stage. Killing the Undead will ensure that you reach the target, and as long as you haven’t been bitten, you have achieved your goal. Therefore, you are free to move on to the next level.

You start with a weak pistol, this has unlimited ammo and is sufficient for the early stages. As you move on, you will find that you will require something a lot more powerful. At different times you will unlock new items, and weapons; An Uzi, shotgun, grenades, barricades and more will be used to survive the apocalypse. Killing special zombies will ensure that you receive plenty of ammo for any of the additional weapons. The barricades are used to control the flow of traffic. They only have a limited durability, so plan to use them correctly, or like me, you will just direct the horde straight to your feet and guaranteed death. 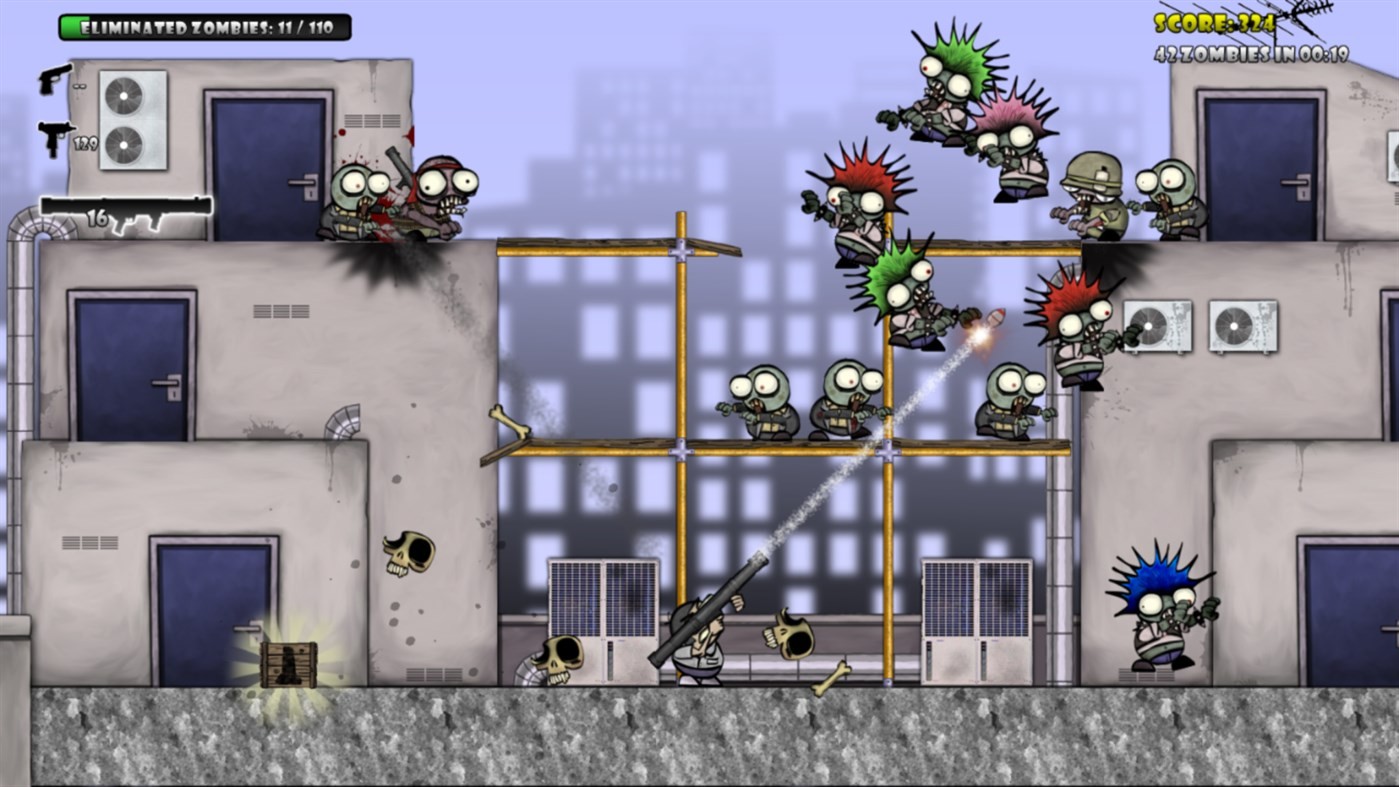 Gameplay is broken down across 3 main regions, each has its own unique look, and as you move through the levels the difficulty increases exponentially. New tasks are also added, in the latter stages, not only must you protect yourself, but you must also stop the zombies from attacking the survivors. This is absolutely brutal, and really does take some thinking in order to be successful. The title suddenly turns from all out action, to strategy and planning. It was a nice twist, and one I certainly didn’t expect. Each of the regions is completed once you have destroyed the main boss. These bosses force you to think outside of the box, and makes you change your gameplay style. None of the levels are impossible, but I admit I had several attempts at a lot of them due to my poor ability to play twin stick shooters. If you happen to be adept at the genre, then you may not have this issue at all. As well as the basic worker zombies, and the loot dropping Undead, you will unlock several special enemies to kill. Each has a unique class, and will require some skill to destroy, from shielded beasts, to jumping punks, and numerous other varieties. The action certainly stays fresh, and doesn’t feel too repetitive.

Playing out in a 2D perspective of a fixed view, all the action is set out straight in front of you. Everything plays out very smoothly, the zombie animations look as natural as you’d expect the Undead to be. The relevant and important information is placed around the outside of the screen, as a result the clutter is kept to a minimum. Therefore, it’s easy to focus your attention to the ensuing chaos. The art style is very clean and cartoony. The colour palette used is earthy, and it’s exactly as I would expect to find within this game’s theme. The change of the backdrop in each region kept the visuals fresh, though they weren’t anything to be excited about, and added very little to the gameplay. Each different character is easily identifiable, as are the weapons. Aiming your gun is aided heavily with a guidance line, if I’m honest, if this wasn’t available I would have struggled much more than I did. This aid certainly made it much more accessible for gamers of all skill sets.

As you take on each mission you will note that the only noise you will hear is groaning, and the constant banging of your gun and explosives. This minimal approach works well. If the developers had attempted to add a high tempo track it would have been too much. Sometimes less is more, and in this instance, I certainly believe that is the case. Unlike most games about the Undead, I wasn’t too scared when I heard them moaning. It was all very light hearted, and quite frankly, everything was drowned out by the ridiculously loud volume of your weapons. Make sure you turn down the audio through your headset, otherwise like me, you will have ringing in your ears for hours after playing. 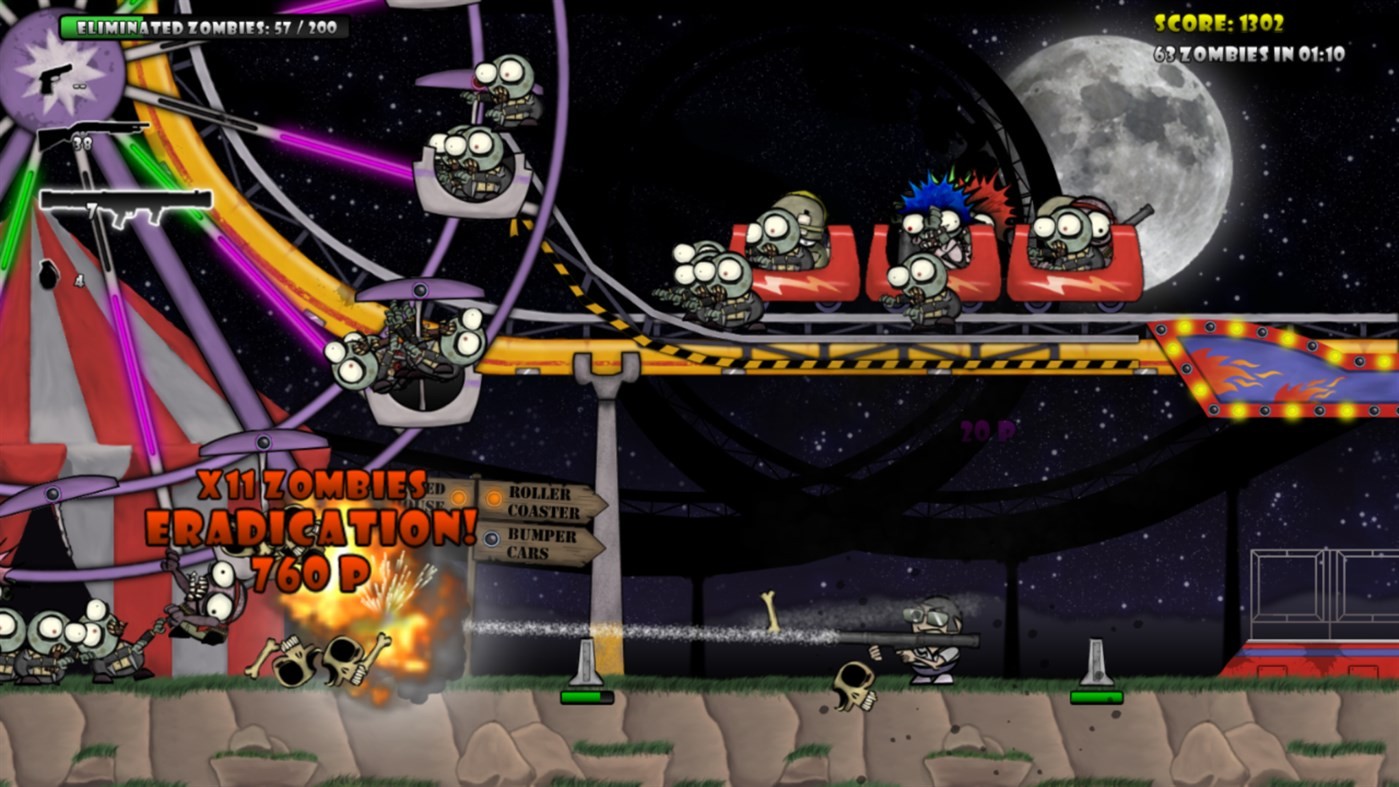 I’m pretty sure that you now understand that my ability to play twin stick shooters is pathetically poor. I have always enjoyed the concept of the genre, but my lack of ability has always put me off. Luckily for me, Mancebo Games made this one pretty easy to control. Helped massively by the reduced area in which you move your character, you can focus all your energy on aiming and shooting. The only time that I found this to not work, was when I got onto the latter stages. Here you are forced to move and plan, this was quite the task for me, and failure was pretty much guaranteed. If it wasn’t for my lack of skill, then I’d say that the control system was very good, and quite straightforward to master.

With a limited number of levels to complete, and no collectables to gather throughout, you would be right to be concerned that this may get old pretty quickly. In my experience this wasn’t the case, though the gameplay is set to follow a certain path, the items that you use, will create a number of variable outcomes that will alter how each level plays out. Add in the very real chance that you will make errors, you will find that there is quite a lot to come back for. Each stage can be completed in a small amount of time, so this one is aimed at the casual gamer. Don’t let this trick you into thinking that this will be a short game to complete, due to the difficulty at the end, you will be looking at around 10 hours to finish this one 100%. All achievements are gathered through natural progression, so there is very little requirement for grinding. All in all, in my opinion, this represents good value for money, and an enjoyable gaming experience.

A very simple concept that could have been very repetitive and boring. Fortunately, the clever use of additional weapons, special zombies, and mission goals kept this one fresh throughout. Due to my skill level I found this quite a challenging title. I’d say most people won’t be as rubbish as I am, and will probably fly through the first two regions relatively easily. The visual presentation makes this easy to look at, and once you sort out the audio volume you’ll not only keep your hearing intact, you’ll also feel like Rambo mid battle. So if you ever have a bad ordeal due to a zombie apocalypse, don’t let it ruin your day, grab a gun and mow them suckers down.

Ever wandered down the street, just to be engulfed by a horde of zombies? Probably not, but if you do, don’t let them ruin your day! All you have to do is grab your gun and mow them down.

The game length may be too short for avid fans of the genre.
Audio balance needs sorting.
Latter levels are perhaps too difficult for the amateur twin stick shooter fan.