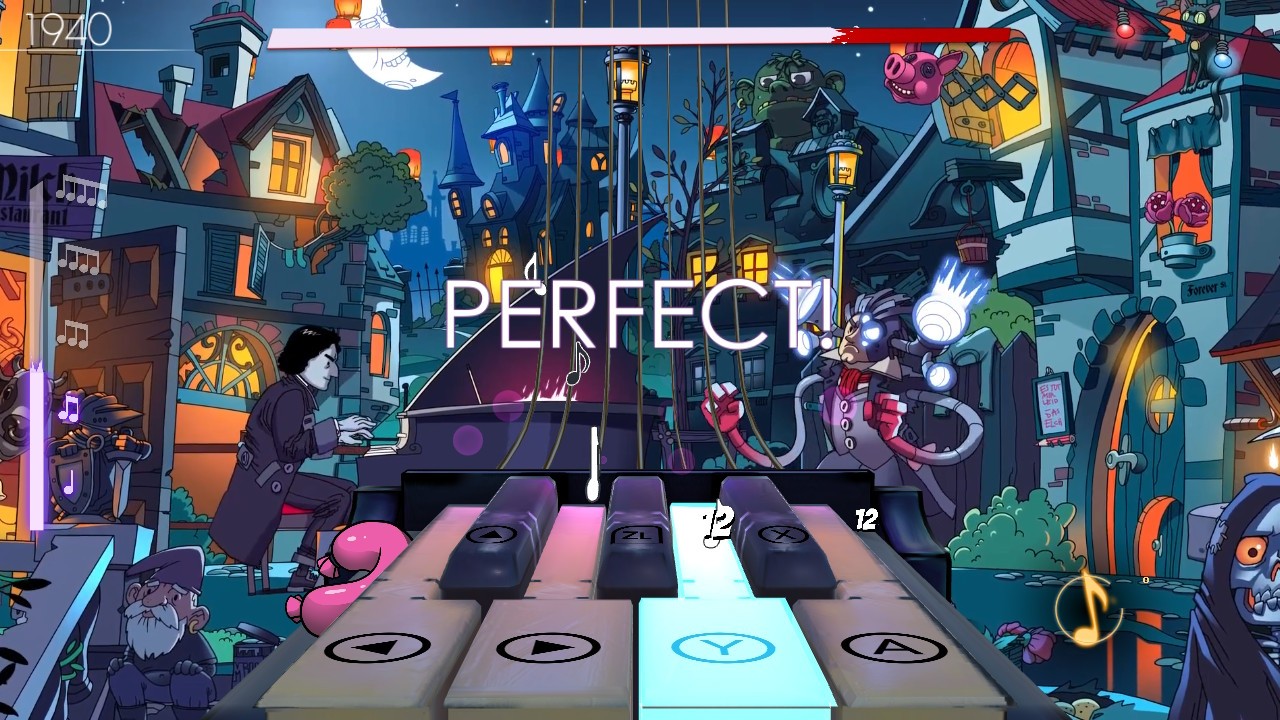 It’s 100% true; when you become a dad, you have no rhythm. Not that I had it in the first place, but Fred3ric ultimately reinstates my insecurities that indeed, I can’t hold a beat, nor can I jump. However, the Switch is the first step into my transition into a full Tetsuo type humanoid, so surely it’s not that hard to keep up the pace?

If your school reports used to compliment you on your observation skills, you’d no doubt have noticed the clever ‘3’ in the title. Fred3ric is the third title in the Frederic series, and despite frequently seeing it in the eShop sales, this title is my first dive into the word of neo-classical performances. Here’s a heads up: Fred3ric is designed for headphones and touchscreen play and if you consider snapping this up, be prepared that the former is the best setup.

Omitting the headphones stipulation was my immediate hurdle as this gives you the advantage. You see, Fred3ric plays out like a lot of those made-for-mobile titles you have played before where it focuses on timing more than anything else, so as a music game if you can’t hear the score, you’re going to struggle. Please don’t put any false security in the visuals as they can be somewhat deceiving.

Don’t also go into Fred3ric expecting bespoke modern beats or licks to play along to, all of the titles are based on classical pieces and depending on how you feel about that, they’re fantastic tracks to interact with. There are nine chapters to choose from, well, they’re available once you unlock them, and each is represented by an infamous piece that you successfully have to play. Like similar titles such as Rock Band, you have to hit a consecutive amount of accurate notes to be able to progress through the game, and this was the initial difficulty. 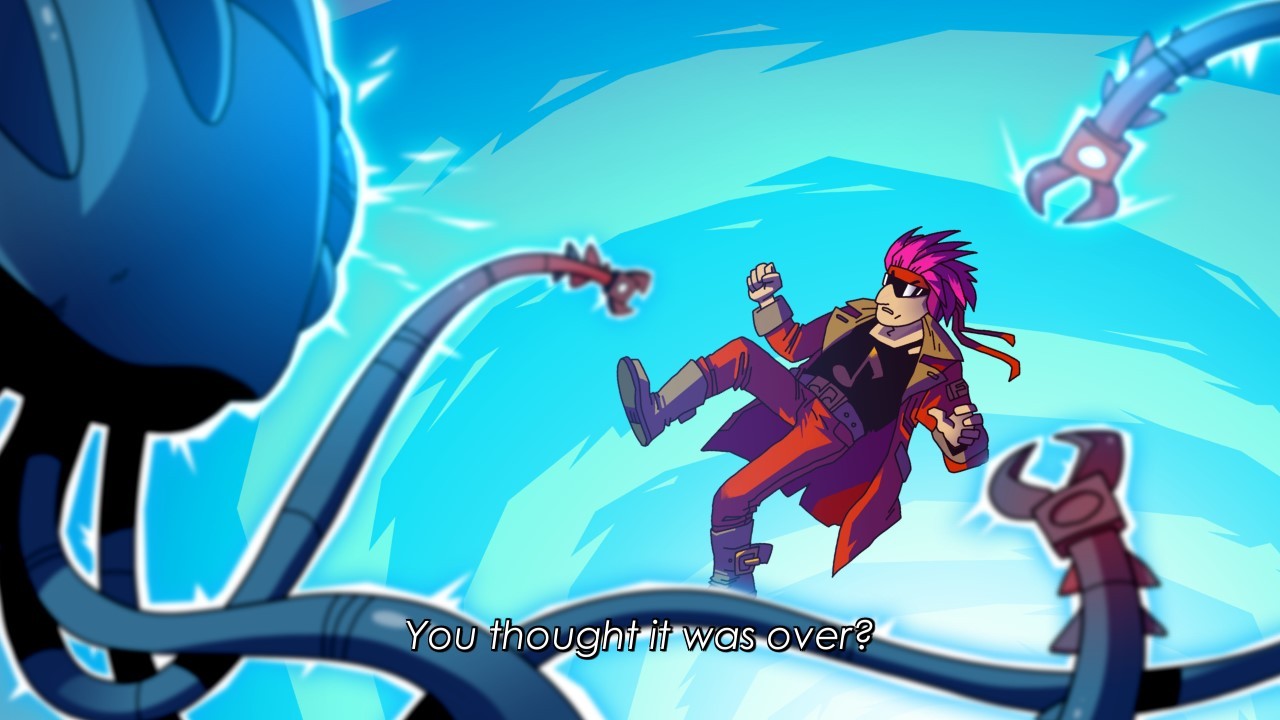 Notes are a physical representation onscreen. Unlike similar titles, they don’t pass a horizontal line where you press a button at the right moment; instead, the notes fall from the top of the screen and align with the keys on a piano. As the note hits a key, you need to touch the screen in unison; the perfect timing results in more points. There doesn’t appear to be a real visual clue on when to tap, so this is why listening with headphones without distraction, offers the best experience as you become somewhat ‘involved’ in the composition.

Each stage offers up a selection of stars that are awarded depending on your performance. There’s the normal mode (hard) and the hard mode (even harder). At least, in my opinion, as it was quite challenging to build up a decent momentum. There isn’t any sign of a quick exit as you can effectively not interact, and the level will play in its entirety. At the end, you will be rated on your performance, so it’s advisable to put in your best effort from the outset. To the left of the screen is a gauge on your performance – each level defined by a single note, moving up to five notes, the top performance.

It was quite refreshing not to be kicked out of a game due to misfiring on a few notes, so there’s plenty of scope to correct yourself while playing. In the end, if you didn’t perform, you’ll be treated to a title screen of ‘you lose’, followed by a summary of your performance. Expect to see your total score, accuracy and combo amount. Playing in the comfort of your own home without having to show the world your score is ideal as I’m not proud that I scraped through most of my performances.

A note on performances: Fred3ric attempts to tell a story throughout. The camera weaves in and out as you take on an apparent opponent as we see close-ups of Frederic playing the piano and his robotic counterpart (more on that in a moment) that are intercut with a style reminiscent of a comic book. The artwork is interesting. It doesn’t break any new ground or stand out with a particular style, but the variety keeps the game fresh and occupies anyone spectating. There aren’t any static images of the keys of a piano as that would be pretty monotonous. 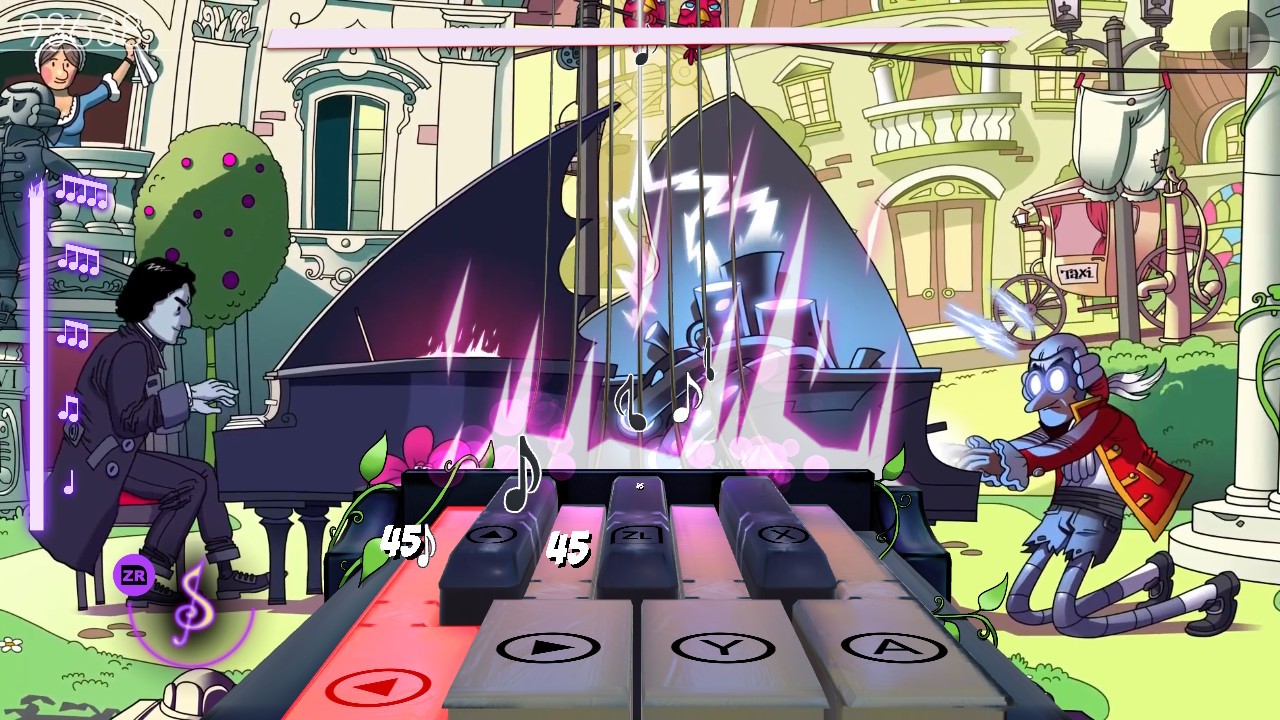 So who is this Frederic fellow? If you know your classical music, or even if you don’t, the character you play is based on the composer Frederic Chopin. After reading this, play some of his work on YouTube or Spotify – no one will judge you, he’s considered one of the greatest composers and for a good reason too. In previous games, your enemy was a character named Zeitgeist, and he returns in this title, bringing cyber versions of classical artists such as Bach, Mozart, Vivaldi and Bieber. The most celebrated composers of our time. Each chapter puts you up against each master, and you must outdo them to stay in the game. For those still following, I’m afraid that the great Bieber does not make an appearance in the game.

Even if classical music doesn’t feature on your playlists, the soundtracks to this game are impressive and easily the standout point. It needs to be, considering the focus is on classical music. Fred3ric features a good setlist and the additional cutscenes are novel and adds to the flow of the game, but the fundamental issue for me is the actual gameplay. As much as I want to be able to feel like I’m composing a masterpiece, I want to know how to do that effectively. The way the notes fall onto the screen doesn’t feel intuitive, and I struggled with being able to maximise the best scores because of that. Well, it was that and my lack of rhythm.

While Fred3ric directs you towards playing on the touchscreen, there is the option to use the controller, though this isn’t advised. Without a doubt, it feels more concise with the d-pad and buttons, but as there are so many buttons to hit, it’s hard to be accurate, so I would recommend using the touchscreen. Fred3ric feels more than a mobile type game, but there’s something about it that misses the mark oh so slightly, and from my viewpoint, it’s knowing when to tap the screen/hit a button. There’s no debate whether the soundtrack is on par or not as it’s the greatest selling point. Fred3ric feels like you can only reach your full potential by playing handheld and with headphones.

As much as I’m a music geek, I found Fred3ric to be a little too tricky to get accustomed with. The soundtrack is spot-on, but the controls don’t feel as accurate as they could be. Unless you can play this in a place without interruption, it deserves to be played with headphones.

Fantastic soundtrack.
The touchscreen is much more intuitive than playing with buttons.
A hard mode offers a bit more of a challenge to those who can hold time.

It’s a little tricky to time the perfect note as no real visual clue.
The graphics are nice but feel a little rushed in places.
If you don’t like classical music, give it a miss.