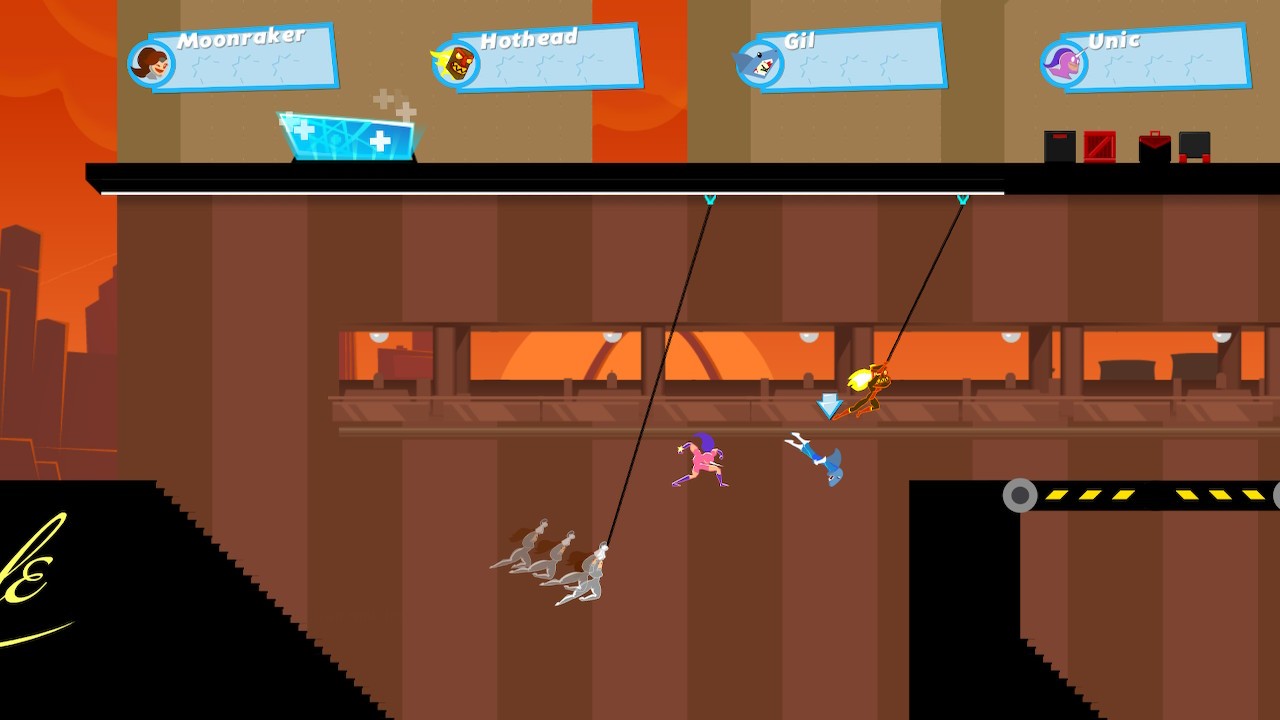 There is a part of me that feels like this is the game that needs no introduction. In the catalogue of my brain, this game is one of those big ones that stands out in the same vein as something like Last of Us, or Super Meat Boy, in terms of identifiability and importance. This is the game that, in their own words, saved TinyBuild from dying before it could even be born. It’s a game that spawned a ton of online competition, and this is far from the first port that’s ever been done. It’s the only title I’ve ever heard of from DoubleDutch, and it’s one of the only titles that I followed in the rise and fall of its eSports fame. This is Speedrunners, it’s finally on the Nintendo Switch, and…it’s rather disappointing for a port.

If you’ve never played it, Speedrunners is fantastic game of side scrolling racing in which you and three other players (or NPCs) attempt to simply stay ahead of the pack the longest. As you run, other players might fall far enough behind to be eliminated by getting cut off by the screen, and, when the head count comes down to just two of you, the screen begins to get smaller and smaller, decreasing the margin of error you’re allowed to perform until even the smallest slip-up means instant death and loss. Usually in a “first to three” sort of race, winners are those who understand the ins and outs of the game in an almost subconscious way. Since the tracks are limited in size (certainly not in variety), you end up running in a loop, knowing the right time to duck, to jump, to pick the certain lane that’ll have a speed boost and to avoid the lane where someone has dropped a hazardous box. If it was only running, it would be exceptionally fun, but Speedrunners does so much more than that. 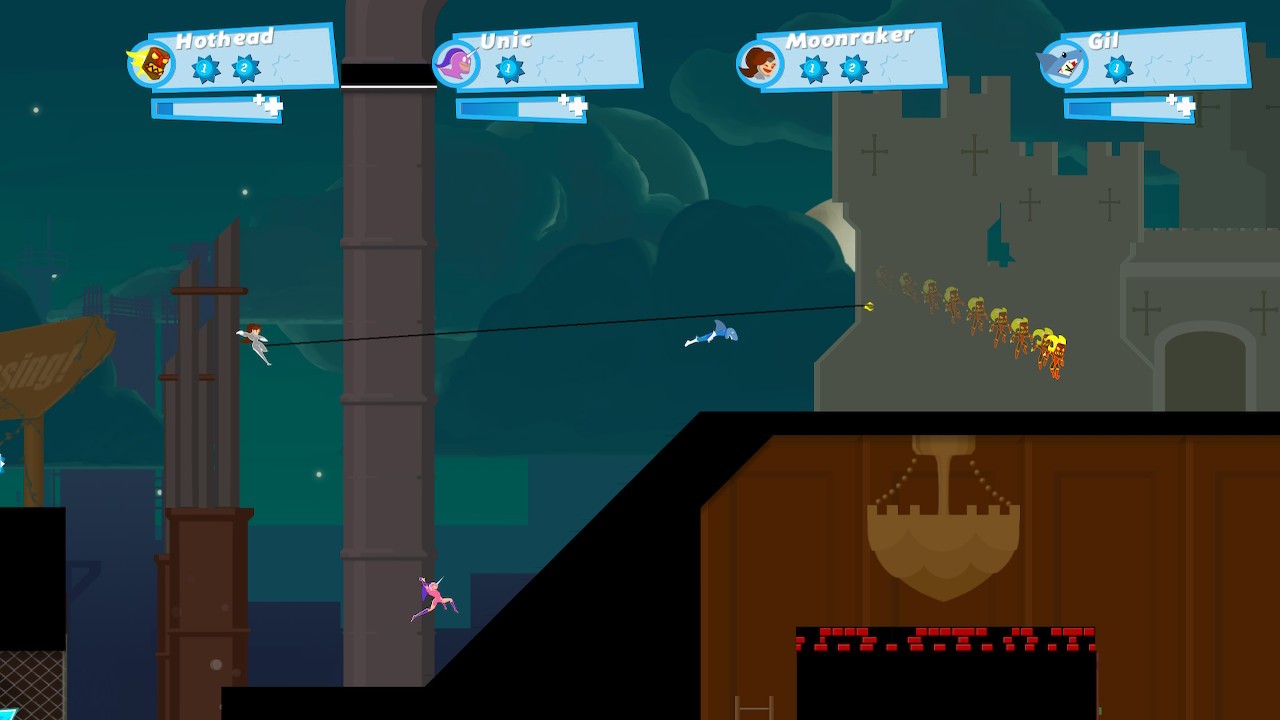 As mentioned previously, you run, sure, but you also can fill up a sprint gauge that feels like the nitrous in a street race. You know others have access to it, and you wait to see when you might be able to use that burst of speed to get the ultimate advantage, or, if you’re too cocky, you end up firing at the same time as someone else and cut away their potential lead. Also, you pick up powerups that you can gradually unlock through the story mode, and they add all sorts of variety to the gameplay in the same vein as Mario Kart powerups. You can get a missile that will target a player near you, but tactical screwups can mean accidentally shooting yourself with it. You always have a grappling hook for swinging from certain ceilings, but a powerup hook will grab a player in front of you and drag them backwards, really ruining their momentum. There’s even a drillbit that gives you a sort of invincibility for a period of time, but you still need to run and jump accordingly: boxes won’t slow you down, but walls certainly will. Unlike Mario Kart items (looking at you, Bullet Bill) there’s not a single item that’s unbalanced enough to give a player an unfair advantage. Each and every pickup still needs skill to utilize it at the right time, and veteran players will have a chance to dodge the attacks regardless.

The controls for Speedrunner are mapped very well for the Nintendo Switch port, and feel quite intuitive. After understanding the location for dash, hook, slide, jump and powerup, everything slotted easily into place. I did a few story missions to test my mettle and unlock some items, and everything was hunky dory. The graphics look wonderful in both handheld mode and docked mode, and the simple but enjoyable soundtrack piped through my tiny speakers as well as the television setup. Much like Runbow last year, this is one of those games that feels inherently “Nintendo” and fits like a glove within the system. The colorful cast of characters, who all have unlockable skins and exhibit certain quirks and personality traits (but don’t have any differences in gameplay), could easily be featured in some sort of b-list Smash Bros clone in the future. There’s a tremendous amount of stuff to unlock through exp, and the online matchmaking is decent right now, though I imagine that’s due to the new release buzz. It’s such a shame the game never achieved PC and console cross play, but maybe it’s something for the future. The number of tracks is tremendous, and the DLC packs allow for a whole lot more to be tacked on if this game becomes your thing. Arguably, if you already enjoy Speedrunners and just want another copy on your Switch, the deluxe edition might be the right investment. 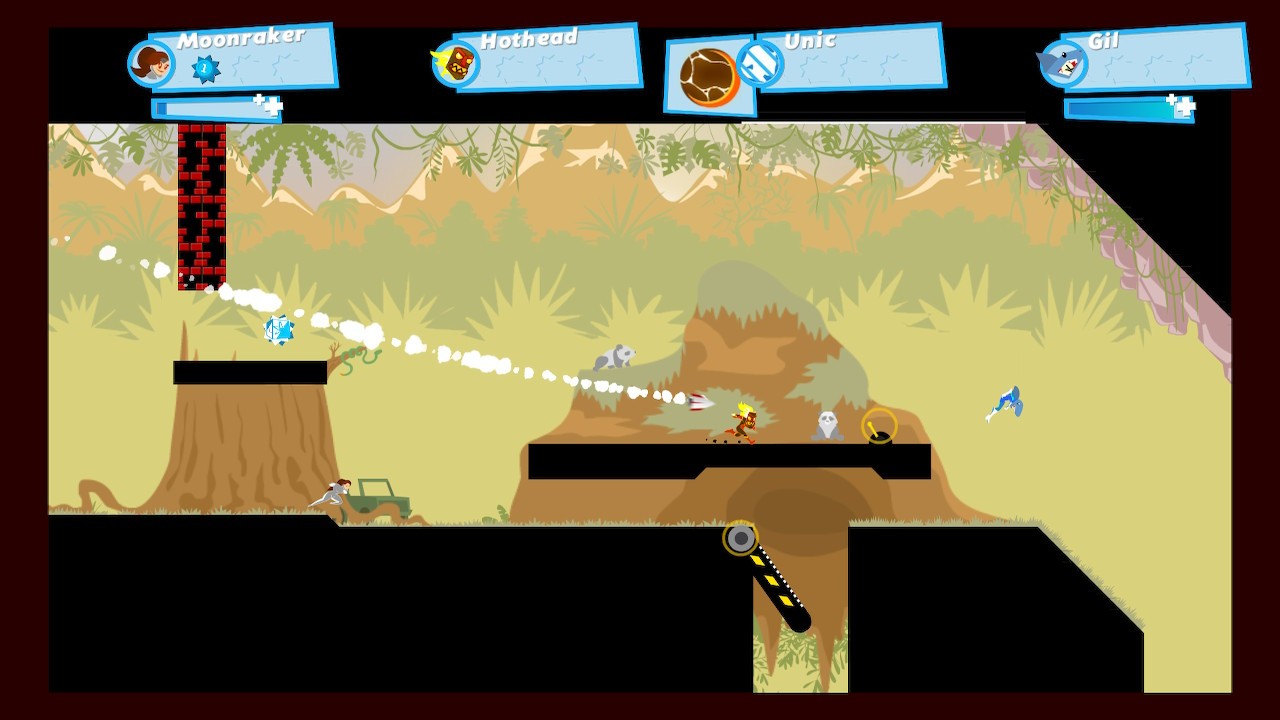 However, you seriously might want to try before you buy. For whatever reason, there is such a tremendous amount of stutter and lag in handheld mode (in my experience) that Speedrunners is not worth playing on the go. The AI clearly doesn’t see when the screen freezes for upwards of two full seconds on my end, but they can run right ahead and keep up with the track while I’m blind for what feels like an eternity. This is one of those games where every single millisecond is key, so how the hell am I supposed to play and enjoy myself when the game simply gives up? If this only happened once, that would be one thing, but it happened multiple times in both versus mode (locally) and story mode (what the hell?). Since I did online in docked mode, I never noticed a stutter there, but I’m wondering if that was because I was docked, and that just makes it feel ridiculous. The reason I’m getting this game on the Switch is portability, and it won’t play well if I’m going portable. I sincerely hope there’s a patch as soon as possible, because this is pretty embarrassing.

Still, It’s Speedrunners on the go, and that has exciting potential, if not execution. Intrinsically, the game is a blast to play, super easy to pick up, and one of those titles that can be busted out for a full on tournament in your home or to quickly settle a dispute, video game style. I’m certain TinyBuild will be able to patch this out (they’ve been good about balancing their Switch releases so far), and, if we can stabilize handheld mode, then we’ve got a fantastic on-the-go competition for everyone and anyone. Just, you know, not yet.

The Switch port of this white knuckle competitive runner looks great, but hiccups and face plants at all the wrong times.