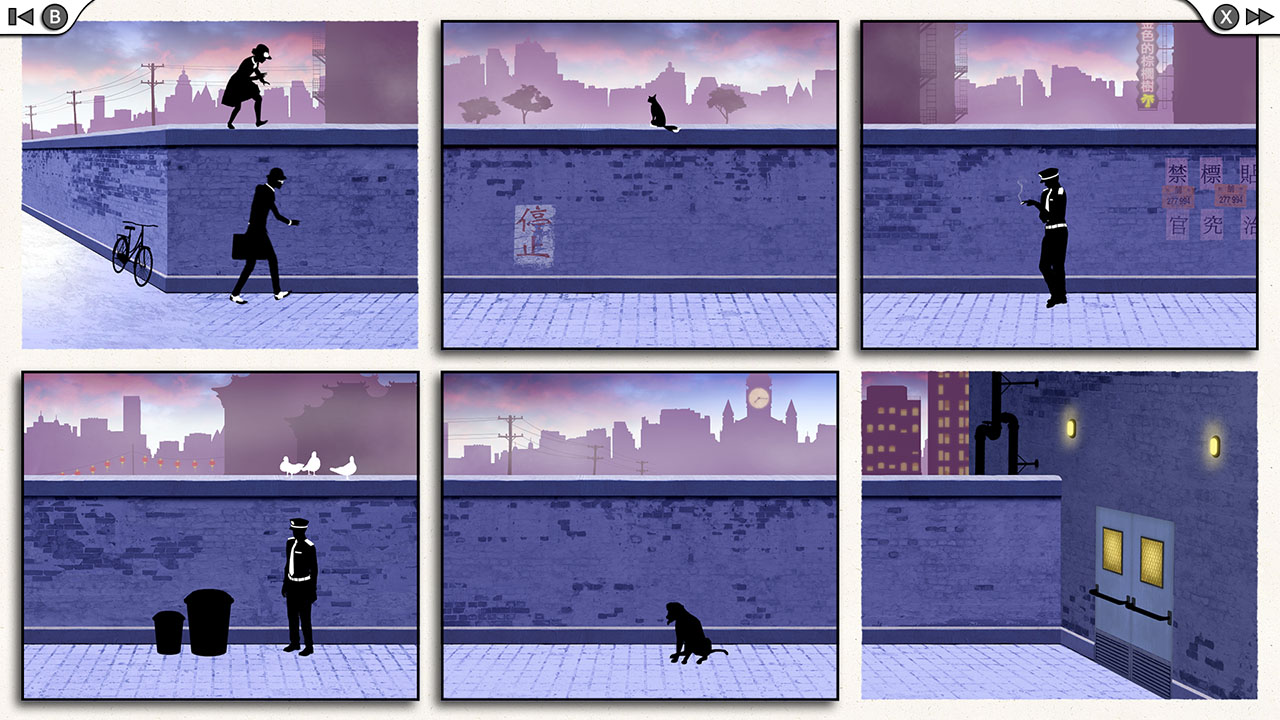 Sometimes, everybody needs to take a step and look at the bigger picture. This has never been more prevalent than with the FRAMED Collection, an artistic noir-styled puzzler, out now on Steam and the Nintendo Steam. Developed by Loveshack Entertainment and published through Surprise Attack Games, this animated comic-book thriller sees you adjusting various frames in order to change the sequence of events during a heist getaway.

This collection of games boasts the award-winning titles of FRAMED and FRAMED2, both of which have seen previous releases on the iOS platform, but now come in a complete package for the first time ever. The mechanics of each of these titles present a simple, yet uniquely challenging and clever series of slides that follows the story of two characters as they try to evade the attentions of the police and local gangsters. Using a variety of windows, or frames, you watch as the story unfolds, from frame to frame, until you run into a dead-end of capture or death. Using your powers of deduction and logic, along with a sprinkling of imagination, you slide the frames around, swapping them or altering their states, until the story reaches a more successful conclusion.

It’s a very clever and unique mechanic, at least it’s one that I have never come across before, that produces all manner of story paths and situations, some of them often humorous in their execution. Each of the settings are brought to life with a stylish comic-book artwork, mixed with silhouetted characters that burst to life with extremely fluid animations. Each of the levels offer a variety in the mechanics of their puzzle-solving; some contain only two or three panels which need to be rearranged, whilst others present any number or size of frames than can be rotated to change the angles of the pictures within and some even require the need to be swapped on two or more occasions, on-the-fly, to reach the end of the scene. 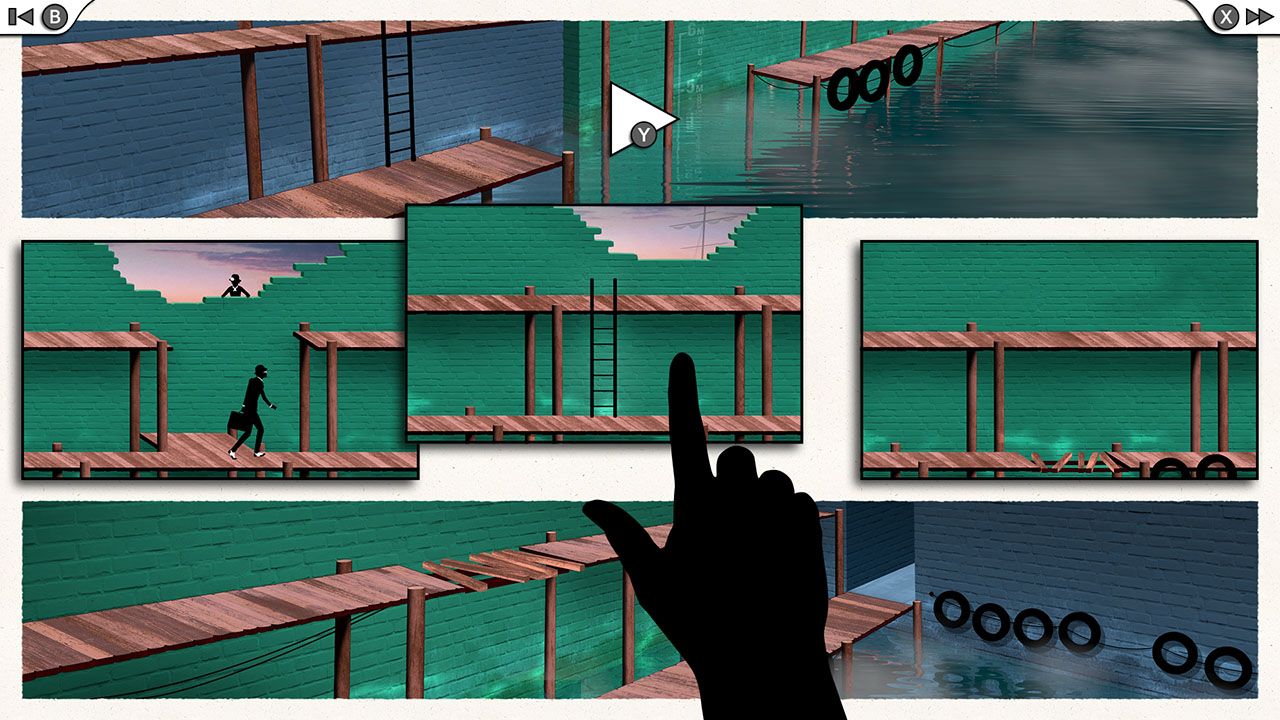 As you swap frames around, they not only adjust the outcome of the story, but also alter the animations within them too. Whereby in one scene, you may approach someone from behind, by changing its playing order, the same scene may show you running past the same person. This produces a technicality to the game that is simply jaw-dropping in its execution. How the developers have produced such a mechanic is a testament to their talents as programmers. An important element of working out a running order for each frame requires a need to pay attention to the details housed within each of them. For instance, if you position an ascending flight of stairs, what does the following frame contain? Does it contain a policeman on the upper level, or is he patrolling down below? All of these variations in the play style of the game produces a puzzler that, although simple in execution, provides a good challenge in finding the correct order for each of the frames.

It’s easy to use a technique of trial and error, as at any time you can play the scene to set its animations in motion. If the scene doesn’t play out as you had hoped, then you can alter the frame sequences again and replay the scene to see what has changed. It only takes a matter of time to find the correct playing order to proceed to the next segment of the story. Each level is presented as a page with a book, or comic, that can be flicked through in order to carry on from where you last left off or replay previous chapters. It’s a nice inclusion that matches the very high standard of presentation that is prevalent throughout both of the games on offer.

The two titles that comprise this collection play under the same mechanics as each other; there’s nothing particularly new, different or ground-breaking that separates each game from each other. However, what FRAMED 2 does do is provide a continuation to the events of the first game as it follows along the same themes and plotlines as the original story. Despite some similarities in how both titles play, each page, for the majority of the time, do offer a new and entertaining sequence to try to solve; although some of these do feel quite cheap in their execution with a couple of examples of repetition and a mechanic that requires swapping out just two frames, thus nullifying any sort of challenging aspects to the gameplay of these scenes. 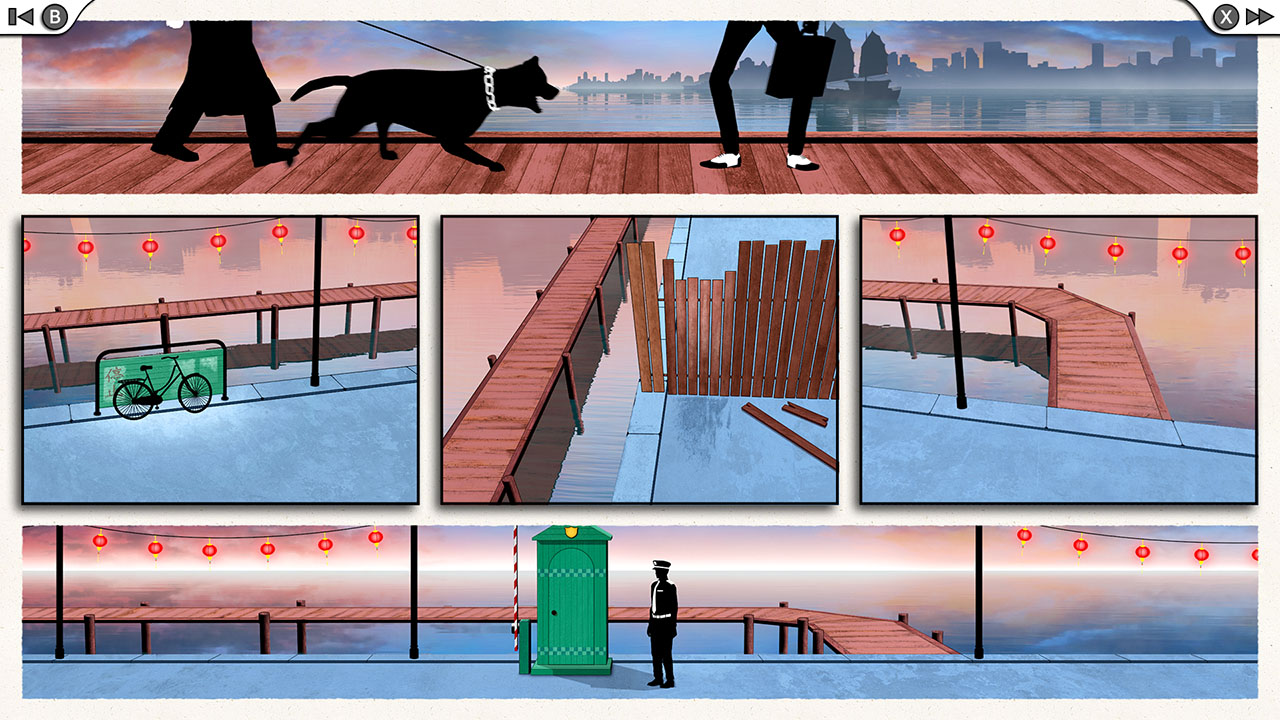 The switch version of the game offers a conventional control scheme, as well as pro-controller support. It also makes full use of the touchscreen capability of Nintendo’s console, producing a more intuitive feel that relates back to the games’ origins. Whatever control you use, they all work in a sublime way with no clunkiness in the mechanics of their execution. The artwork, animation and style of presentation all look glorious, particularly on the smaller screen of the switch’s undocked mode, making it an ideal casual puzzler for when on the go. There’s no narrative here, instead both games contain a presentation similar to the silent-movies of old that are backed up with jazz score as its soundtrack; an aesthetic that perfectly complements in noir-style settings.

Overall, FRAMED Collection provides a unique experience in the puzzle genre. With its artistic style and technicalities in its frame-swapping mechanics, it’s a game that deeply satisfies with whatever sequence of events you create. However, it is, unfortunately, far from perfect with some of its puzzling elements not producing an immediately logical solution, too many instances of cheap gameplay and an overall length that can be completed in just a couple of hours. Despite these setbacks though, this is still a title that should be experienced for its uniqueness, wonderful animations and beautiful artwork. It fits into the casual style of gameplay perfectly, offering a relaxed and stress-free environment in which to lose yourself. There’s nothing frustrating in the execution of its puzzles, as the completion of all sequences can easily be solved through a trial-and-error mechanic, but this doesn’t take away from the fun that can be had, although I do feel that there may some question marks over its long-term appeal. However, if you take a step back and look at the bigger picture, you’ll easily find a refreshing game that sits nicely within the frame of the Nintendo Switch.