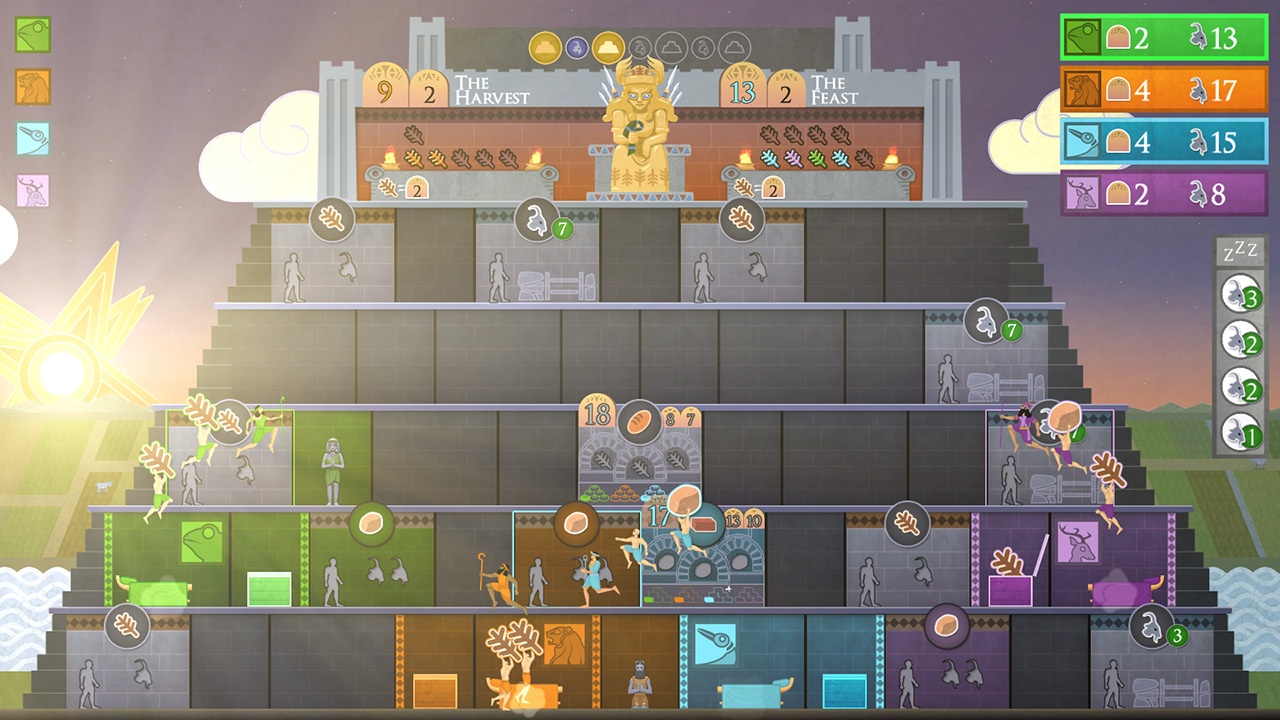 There is something inherently awesome and intriguing about the lost civilizations. Things like the Mayans, the Aztecs and the like paint an amazing picture of a people who were well on their way to conquering the world in another direction before someone (usually Europeans) intervened. There are left behind relics and artifacts that hint at the traditions, beliefs and lifestyles of these lost people, and I have always found them fascinating. Though none seem to be quite as mysterious, in my own opinion, than the Sumerians. Often made the center magical force of the ancient world, Sumer has left behind evidence that it was where innovations of agriculture, domestication and many modern, simple machines first originated. So it seems only fitting that they be the backdrop for the mildly confusing, incredibly hectic but crazy addictive Sumer to take place.

Sumer is a board game of sorts, but that feels like a ridiculous misnomer. Board game suggests something that would translate well to a physical presence, yet I couldn’t even imagine how to put Sumer in a physical form without knowing that someone was going to get very, very hurt each turn. Instead, let’s call it a turn-based action platformer with resource development. Your goal is to appease the requests of the goddess, Inanna, by “sacrificing” certain things each and every turn. You can’t very well sacrifice what you don’t have, so you need to collect it, either through harvesting or general creation. Some items need to be crafted into others, and all of it costs a certain number of goats, which is Sumer’s currency. Sacrificing items earns favor, and whoever has the most favor when the goddess declares the year over is crowned the new ruler of Sumer. It’s not the most arbitrary way for someone to decide fealty, but it certainly is interesting. 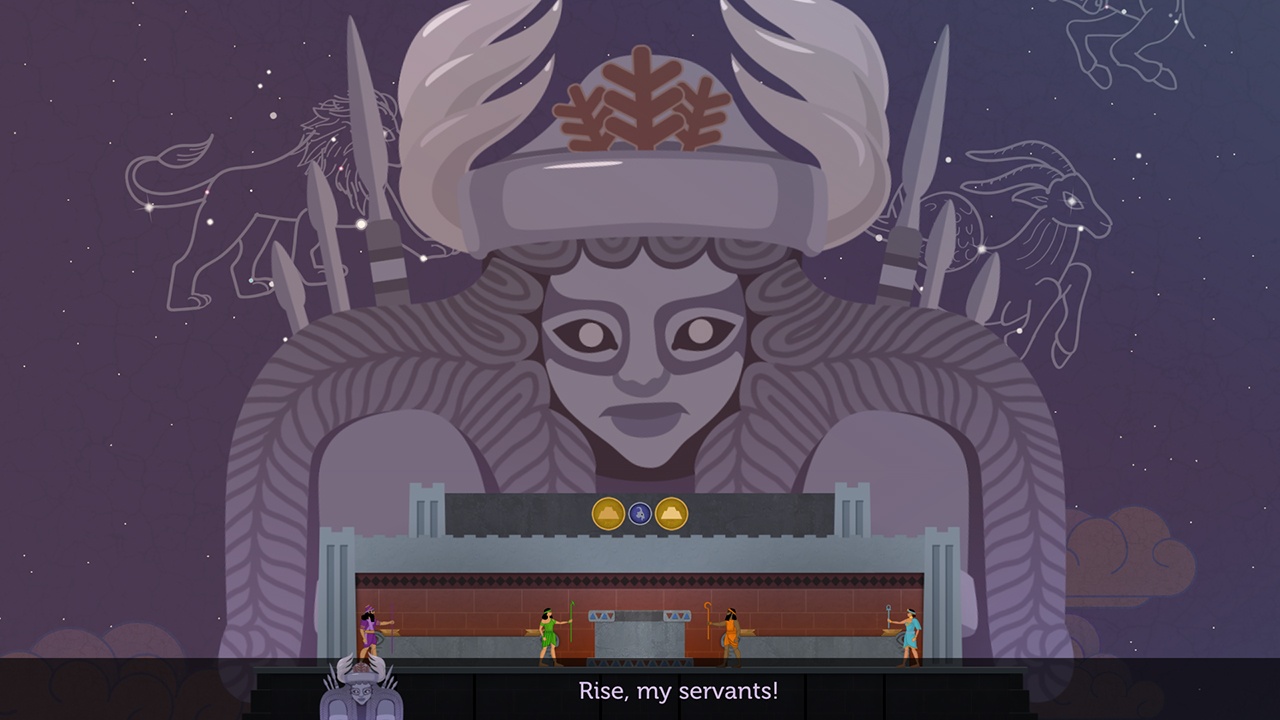 Right out the gate, Sumer is doing something interesting. Trying to read the rulebook available in the menu is a waste of time; a great many people went great lengths to put actions into words which are simply better conveyed through trying than watching. Every turn, you have a certain number of helpers who can gather resources, refine items or otherwise get goats for you. The board has a limited number of slots available for everything, so you need to be fast to get to where you want to get what you want. For example, the goat farms usually give only three, but you can jump quickly and get to the five farm, which’ll be a huge advantage come later in the game. But not only do you want to get to the spot quickly, you also want to retire quickly, as the first to “bed” to end the day will get bonus goats. Basically, it’s like a crafting game with a massive time limit and a lot of restricted access. On top of that, it’s multiplayer, so the likelihood that your friend (or clever AI) is gunning for the same strategy that you are is pretty likely. Moreso, on top of THAT, you gotta pick and choose your battles. Sure, getting clay means not harvesting wheat this turn, but that puts you ahead of the curve for baking a pot, which could be more worthwhile in the grand favor of things.

Additionally, between turns, you get to go to a goat auction house, where you bet in real time against the other players to try and win goodies for either yourself or the whole board. Maybe getting an extra helper, or a statue that grants bonus favor just for being near your home. It might seem silly to beat the band and outbid for a brewery (yes, Sumer was rich in beer) that anyone can use, but putting it closer to your spawn base could make all the difference in the difficult months. Plus, if you really need to, you can sacrifice some of your favor if you don’t have enough goats and are cocky enough to think that this’ll be the tide turner for the game. Remember: goddesses classically don’t like it when you gamble away their blessing on a pottery house.

Sumer is pretty grand for a handful of reasons. Firstly, the gameplay is honest and upfront. Once you play the intro game in the tutorial, you understand about 85% of things, and the rest comes from naturally culminating events and gameplay. Anyone, absolutely anyone, who can figure out strategy and cause/reaction situations will like this game. Since it doesn’t rely entirely on luck, it also removes the painfully awful part of board games where I curse my friend for always managing to land on Community Chest instead of my properties. Instead, this game caters towards gamers who can think on their feet and move their fingers fast. The first half of the game is gonna belong to the cocky kids who know how to get to the wheat quickly, and that’s all there is to it. 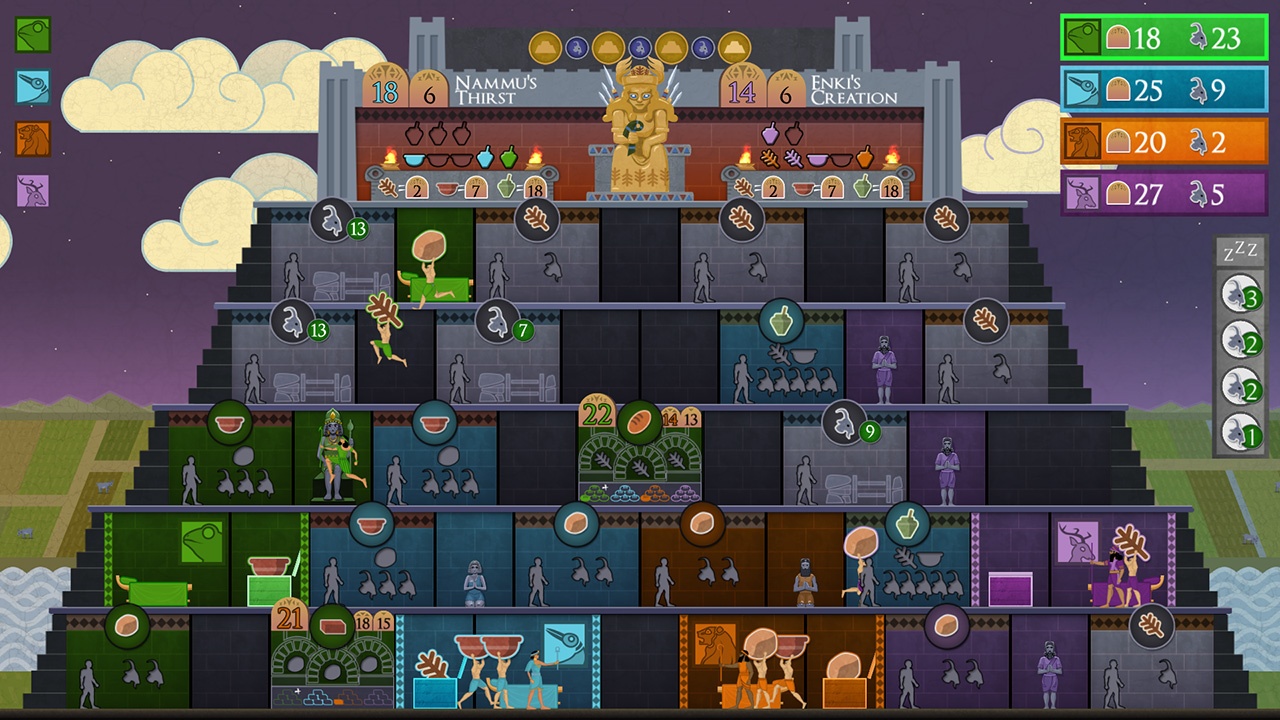 Interestingly enough, strategy becomes a larger component the longer the game goes. Sumer makes sure that players have enough time to live to regret their placements, because you can’t possibly imagine what Inanna will ask for each turn, and how much. You end up running to the other ends of the board because you thought wheat was finished, and now suddenly it’s the biggest request of the month. It honestly becomes frantic, because you’re simultaneously trying to get what you need, thinking about what you WILL need, and potentially sacrificing what you want to prevent others from getting what they want. This is a game that starts to border into Mario Party territory in terms of making enemies out of your friends, but at least it’s all about conniving skill and not just malicious luck. Still, when Inanna makes her final decision and crowns the ruler, that’ll be a sour moment for someone.

The only real drawback of Sumer is that it does attract a very specific audience. It’s far too digital to appeal to the average board game enthusiast and too strict on rules and turns to make a fan out of a staunch typist (someone who only enjoys one type of game). But I say that with the merest weight of problems; this particular criticism is cosmetic and opinionated at best. I really had a blast with Sumer, and I think that most people will, especially if you’re looking for a decently timed game for a close group of friends. Give it a try, I don’t think you’ll be disappointed.