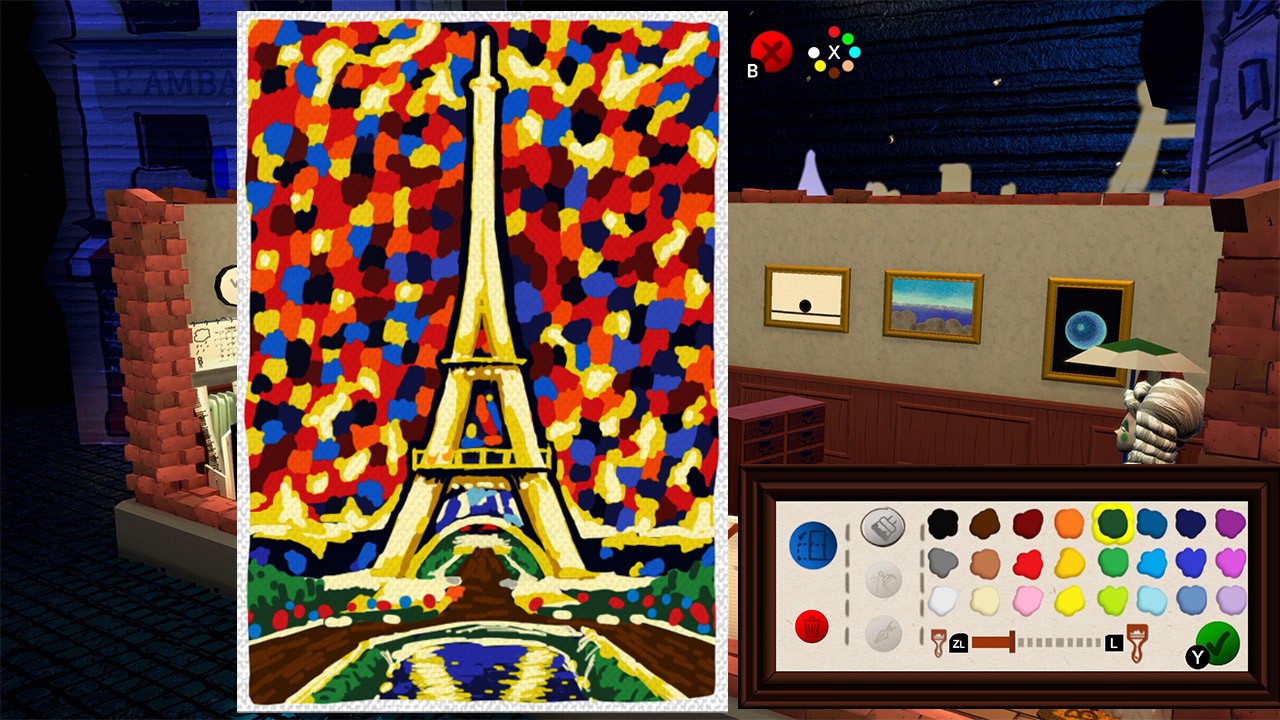 Art is subjective: we all know what we like. But how many of us are capable of creating original, thoughtful pieces that evoke a mood, heighten awareness to an inanimate object or change the world? Probably not many, but hell, let’s give it a go in Passpartout: The Starving Artist.

The title is hardly revolutionary as poverty usually goes with the territory. I have a few artistic family members and friends who are far from indulging in Fabergé eggs and golden grills for their mouth holes, so the plight in Passpartout: The Starving Artist isn’t new. I can’t say the same for the actual gameplay as it’s pretty unique: you steadily build a collection of art pieces, flog them to the appropriate punter to get your name out there while juggling bills and your penchant for baguettes and wine. That’s not a slur, there’s a way to see your income/expenditure and these indulgences are listed with the rent.

Your role is to help Passpartout gain recognition by getting his paintings onto the market. But this isn’t a strategy game – no, no, no: you’re the one producing the art (as Passpartout) and adjusting your productivity to the tastes of the art lovers.

In the beginning, you start off with a humble abode – you work out of a lock-up/garage and pump out pieces of art to an audience who have seen your sign advertising art for sale. Here you click on the easel located in the garage and are presented with a blank canvas that you can either fix in an upright position, portrait, or landscape. To the right of the canvas are your colours to paint with, tools that you will eventually unlock and the option to adjust the width of each stroke. Before you start salivating thinking that you can compose a work of art, be mindful that the painting tools and direction is on par with MS Paint. That being said, I’ve personally seen some amazing work created in the above just using a handful of colours. Forgive the cliché, but your imagination is the limitation. I’ve always campaigned that anyone can draw/paint – it’s mostly down to creativity. Technique comes later. 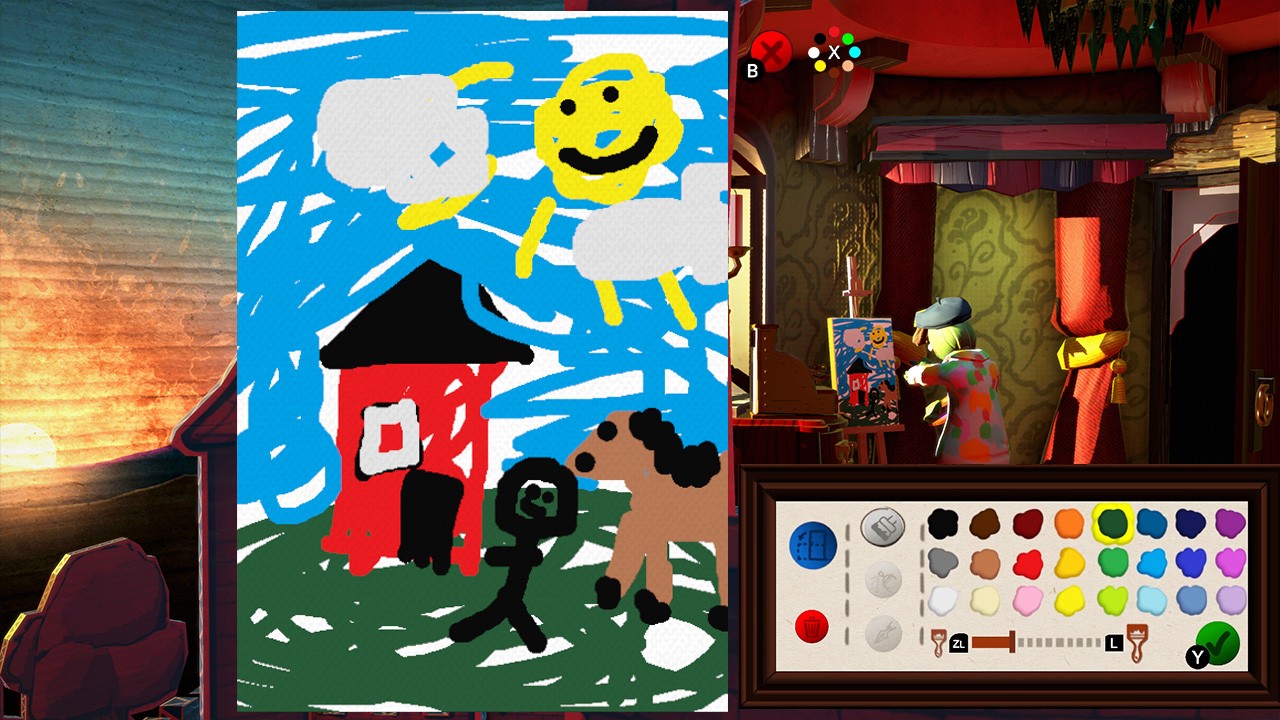 But how do you draw in Passpartout: The Starving Artist, I literally hear you cry. I do. Well, you can use the analogue stick if you’re a maverick, but chances are you’ll use the touchscreen for accuracy. I enjoy drawing freehand in with a mouse but understand that not everyone agrees. That’s why pro’s use tablets and look – you have one in the Switch! Granted, it’s quite small, and unless you have a stylus, you’ll be using your sexy digits instead. It’s not as bad as you think, and considering the art you create isn’t being submitted to the Tate Modern, you can feel safe in your experimentation.

The fun lies in what to create. In the early stage you can do whatever you like – heck, if you’re a true artist, you can stay like that for the rest of the game. See what happens. Ideally, you need to adjust to the feedback of the art lovers who look at your work. Be warned: they aren’t particularly pleasant if they don’t like what they see and will call it rubbish. Don’t get too attached to your creations and it won’t matter. Here, it’s mostly about productivity. Time is on your side in that there isn’t a time limit to beat or a boss to defeat. Instead, potential customers will look upon your inventory and decide whether they want to purchase or not. If they do, they’ll make an offer, and if you choose to accept it, you can make a profit. Do note that the longer you take, the more they’ll drop their price, but you can also take a risk and haggle. As I said, if they don’t want to buy the piece, they’ll let you know.

For a good hour or so I played this non-stop. There’s no real indication of what the goals are other than producing and ensuring you pay the bills. I was continually in profit so had the flexibility to explore my artistic side, though the fussy side of me didn’t like it that every time I put a painting on display, it soon sold and I had nothing else on offer.

I went through a few transitions in my brief art career. The first steps were painting a landscape picture of a house with a chimney, smiling sun – that kind of thing. Then I moved on to the infantile side (my favourite) drawing boobs, dog eggs and general stupid images and words. Finally, I moved onto collections. My first was a series of pop art style fruits, later onto German expressionism. I was showing off by then.

Eventually, a critic sees your work and your garage moves on to an outdoor exhibition to exclusive galleries. The audience changes up a bit, and it’s again up to you if you wish to cater to their needs or be true to yourself. Whatever that means. What worked before on the street doesn’t necessarily appeal to the suits and fat cats you meet later. Again, they’ll let you know that they don’t like your work. There are different paths to take, so the ending may change. 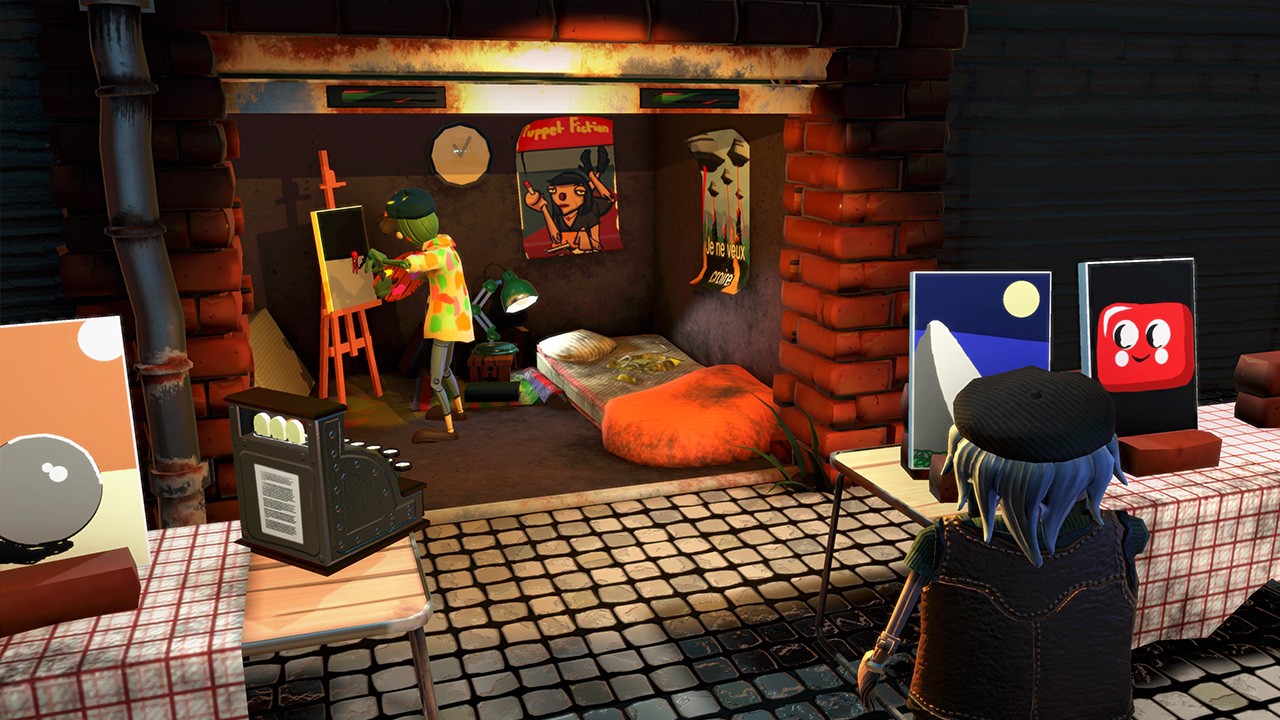 Overall I really have been enjoying Passpartout: The Starving Artist. It’s quite a unique game building on a pastime we’ve all experimented with: doodling with MS Paint or equivalents on mobile. I find comfort in drawing anyway so this was right up my street, but putting that to one side, it’s very replayable. Again, it’s all down to your imagination. If you don’t like drawing – even if it looks terrible, you probably won’t like it as that’s effectively the game. There aren’t any bonus stages or additional features.

Presentation-wise, the graphics are great, juxtaposed with the artwork you create. There’s not much point spending an age on one item as you need to make money to pay your bills, so the finished product often looks crass. Like a starving artist then. In addition to the visuals, the music is a nice addition as it’s almost like a muse in that it keeps you upbeat and actively producing new material. Without the touchscreen, this would have been dead in the water as it’s not the best experience with analogue sticks, obviously.

Passpartout: The Starving Artist has been out on the PC for a couple of years now so you’d think that this is hardly a breakout game now it’s on the Nintendo eShop. However, I would champion it as a great addition to your collection if you like variety and a bit of creativity in your diet. It’s not your conventional game but being able to play this on-the-go, with a touchscreen and taking a screenshot of anything you really liked at the press of a button is excellent. Passpartout: The Starving Artist has found a decent home on the Switch, and I encourage you to try something new.

Something I realise I’ve skipped over in my review is the ability to name every piece you create, or rename it should you change your mind if it starts to decay without any financial interest. One thing I will say is the ability to trash a painting if it doesn’t garner enough attention. A couple of times I had comments that my work was unoriginal so in fear of it denting my fragile artiste persona, I sneakily would chuck it in the bin. That’ll be our little secret.

A nice distraction from headshots and the undead, Passpartout: The Starving Artist is a charming game that brings out the inner creative.

A great, limitless concept for doodling
Mildly therapeutic through creativity
Intuitive controls through the touchscreen, though a stylus would be a plus

The game is just drawing, no platforming, mini-games or QTEs
A little frustrating when you think your art is good, but the AI literally says it’s crap, and you can’t earn any money