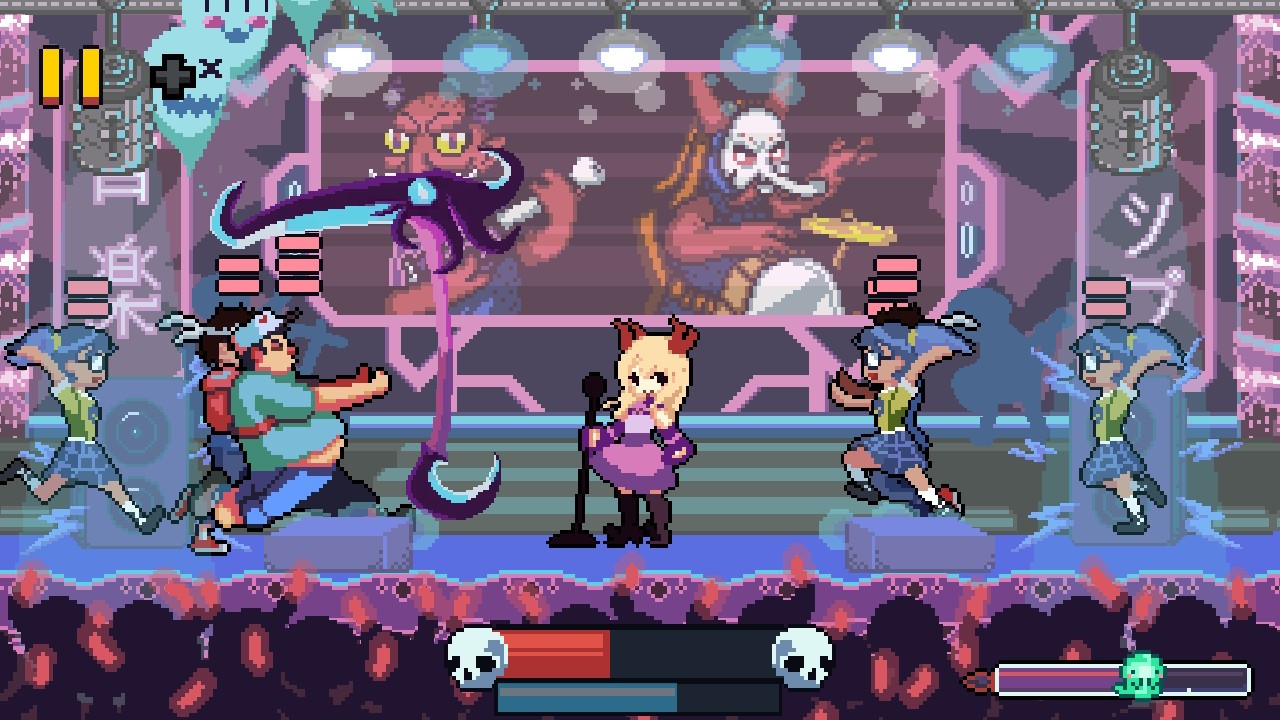 Sometimes, a title and a graphic are enough to get me into trying a game. Specifically, I was immediately entranced and excited by the ridiculous presentation of Kawaii Deathu Desu. The title is obviously a fantastic nod to all the different speech mannerisms that show up across different anime titles, and mispronouncing death as “Deathu” was enough to get my attention. Plus, the entire pixel art presentation of an incredibly cute Death mascot told me that it had a lot of potential. Games have been made, successfully, off of much less, so why shouldn’t this one be a success? From Pippin Games, Kawaii Deathu Desu does live up to its name: Death is a fantastically cute character, and the gameplay, however simple, was enough to keep me coming back for more.

In this game, Death and a small cohort of supernatural beings are all attempting to be pop idols, because why the hell not. Death and her pals naturally decide that they need to be adorable in order to woo over fans, and their plan succeeds too well. Now, everytime they have a concert, they get completely mobbed by obsessed fans, and it puts our idols into serious danger! The only solution is to beat the fans to death and reap their souls, because you might as well do some work while you’re having fun. Death and pals will have never-ending stages and a permanent wellspring of screaming concert goers, so sharpen your scythe, prep your fists and get ready: this mosh pit takes place on the stage and the fight is on!

Kawaii Deathu Desu is an ultra simplistic arcade brawler that takes place on various stages around the world. Death, or one of her companions, will be performing a song while fans rush in from either side to basically tear them apart in appreciative fervor. The only hope is to beat them back the swinging either left or right, using the L and R shoulder buttons, respectively, to swing in the aforementioned directions. There is zero walking, blocking or doing otherwise: L and R are your only options. As you slaughter the fans, a bar will build up, eventually allowing you to unleash a sort of limited super attack that has different forms. For example, Death-chan will suddenly get a massive scythe that does better damage and has a far greater reach. You continue to smash the fans until the song is over, you take a bow, and everyone can go home if they’ve still got souls left in them. You can then apply the collected souls (which are the game’s currency) to different things, like unlocking new characters, additional costumes, and levelling up in order to increase your stats. With multiple stages across various countries, the fun never ends. 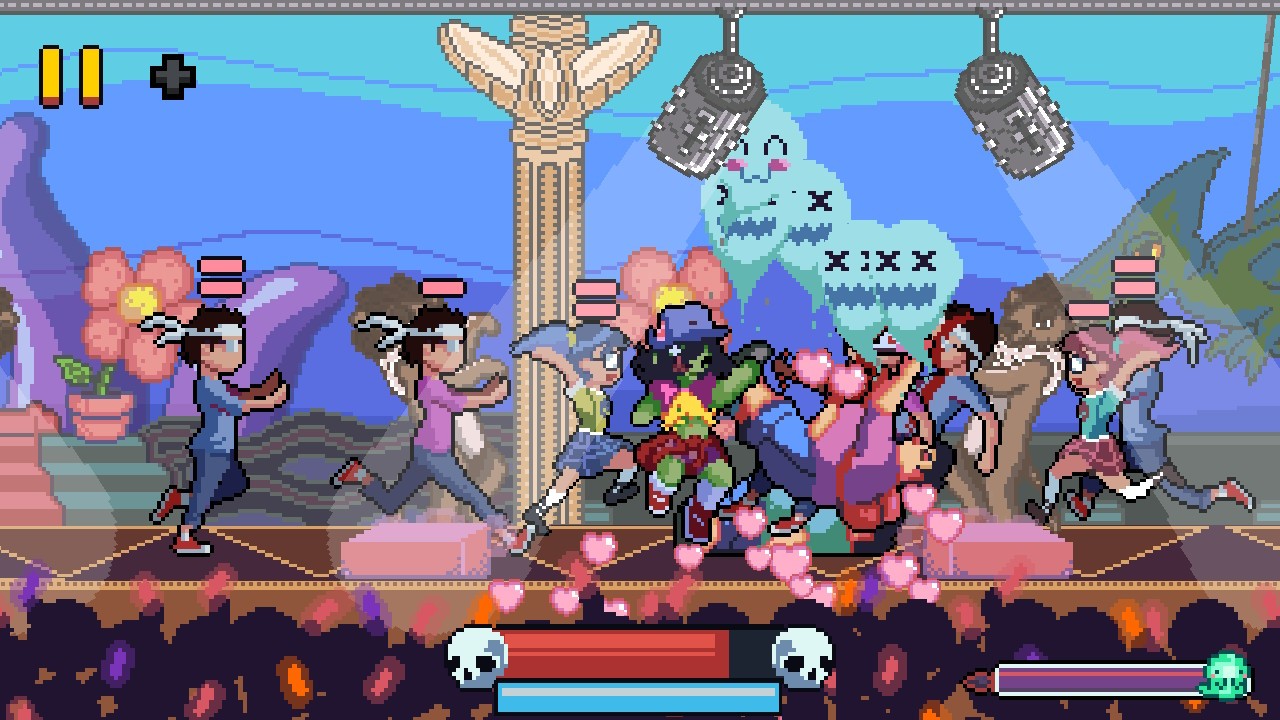 I’ll start with the bad because the bad aspects can severely turn people off. First, everything I just said is the entirety of the game, front to back. Kawaii Deathu Desu certainly hopes to capture the minimalist aspect of arcade gaming, and there isn’t anything more than mashing the two shoulder buttons over and over again while trying to stay alive. For what it’s worth, it’s not totally mindless: you do need to keep the proximity of the fans in check, you need to pivot and button mash like crazy to stay alive, and you need to know when the superpowers are going to run out because you can get swarmed in a hot second. Seriously, later levels are nuts with how fast the fans overpower you and then you’re simply dead with a pithy pile of collected souls to bring back to Hell or whatever. I ended up using the new button remap feature in 10.0 of the Switch OS to move the shoulder buttons to the directional buttons to make things that much easier and less noisy. Once you relocate, it’s a breeze, but it doesn’t change the fact that there’s zero additional gameplay miraculously behind the curtain. If the constant swinging or punching doesn’t seem appealing to you, it probably won’t be.

Additionally, Kawaii Deathu Desu is very non-intuitive outside of the gameplay itself. The menus are all navigated through button cycling, meaning you need to mash certain buttons repeatedly in order to move through different options. Choosing levels or characters is fine because it does utilize standard directional pad expectations, but toggling between character profiles, outfits and the level up system means pushing the same button multiple times to shift between screens. While this seems like a small thing, keep in mind you MUST level up to progress out of the initial Japan levels and survive in your first international stage (China). The fans have more health and move faster, and you won’t survive as a level one idol trying to carve out a name for yourself. Not that it really matters because the music, for the most part, is sort of poppy without really being electronic or exciting. The menus and the music don’t seem to match the game, which is such a crying shame, because it’s a wasted opportunity all around,

Now, having said that, there is a lot to be enjoyed with Kawaii Deathu Desu. Firstly, if you do jive with the core game mechanics, you’ve got so much ahead of you to rock out and lock into. Death and company move across so many stages throughout the world, and each is done up with adorable pixel identity that gives unique attributes to the stages, the outfits of the characters and the fans that you lovingly, mercilessly slaughter. The pixel art is what got me hooked, and it keeps me here by taking what is little more than a simplified One Finger Death Punch (if you can imagine that) and throwing in a ton of anime inspired artefacts. If I was just killing innocent fans all over the place, that would be one thing, but it’s awesome to swing my scythe or throw down a green fist over very stereotypical otaku from every God-forsaken corner of the globe. There’s variety in their appearances and moves, so it’s not just a straightforward copy and paste from stage to stage. 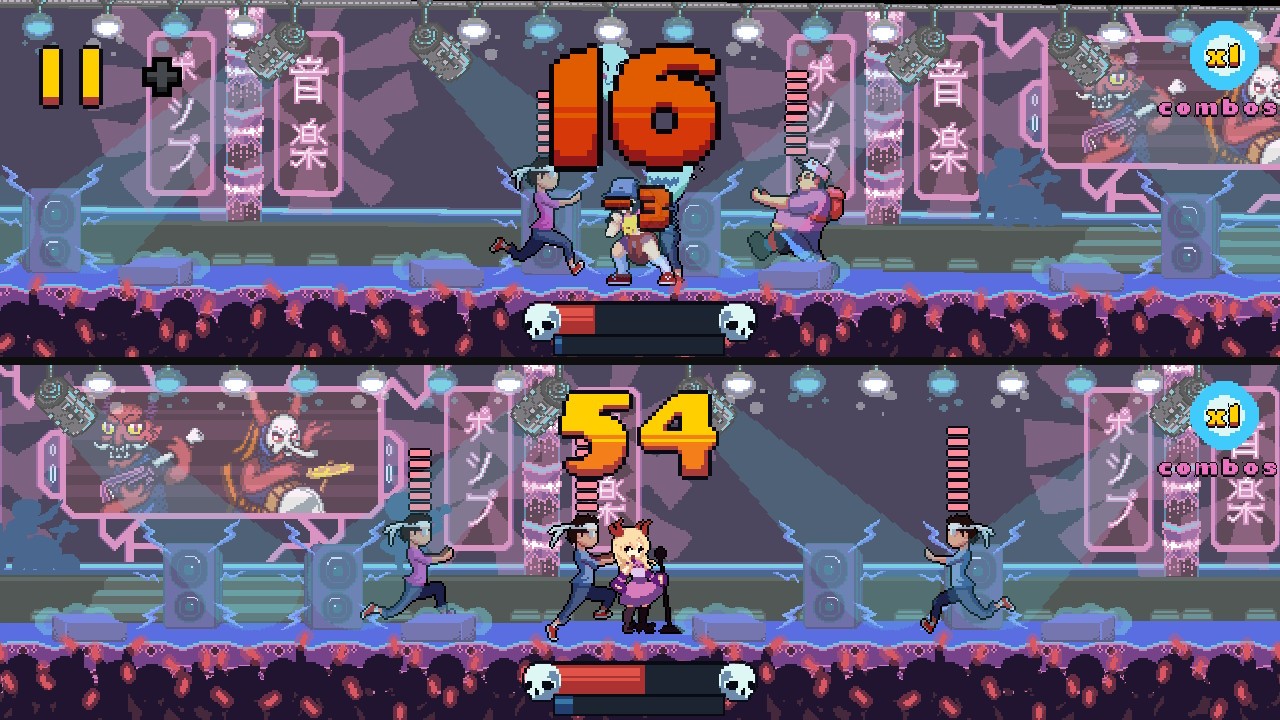 Additionally, there is a lot to be unlocked, and I mean a lot. Death has something like six additional friends to bring on tour, and everything I’m reading says the devs are involved with constantly adding more information and more detail to the game all the time. The music does get better the further you go along, though I never quite got the kawaii metal sensation that I was hoping for, no Babymetal vibes ever fully presenting. However, the number of costumes for Death alone are adorable and plentiful, and every single unlockable character has a different set of outfits to get, not to mention needing to level them up so they can survive the fans outside Japan. If you’re a completionist, you’re looking at a lot of hours harvesting souls in different regions to help get you that cute little pink number that brings out the blood so well.

Lastly, the game, surprise, isn’t as simplistic as you might think. Okay, sure, Kawaii Deathu Desu never changes its stripes, but it does offer the stripes in different colors. The endless mode is just a weird hell of its own making, and I don’t recommend it. Besides being tiring and seriously hard, the reward outcome isn’t worth the time you put in. However, rocking out the levels in normal mode to unlock more realms and then doubling back under Ranked mode makes a lot of sense. You want to prove you can sustain under heavy assault of the fans, and get that awesome stamp on the card to prove that you rocked out with the best of them and was still standing when the last encore played. I’m hoping more stamps get added later on so that I can have additional incentive to keep playing and to add more character variety than just being either Death or Mary (the other characters aren’t nearly as versatile or have the reach/strength). The appeal is in the appearance, but there’s more in terms of delivering with consistent gameplay and expansion.

When it comes down to it, Kawaii Deathu Desu is an interesting approach to a simple concept that falters slightly in some aspects (I do wish the music was a bit more lively and exciting), but fully commits to the core mission statement and the presentation. The game looks fabulous, and it’s addictive as hell to keep mowing down concert goers left and right in a desperate bid to finish the damn song. If you’re looking for a title that will hook you hard for a couple of days, this is a pretty solid bet, and you can enjoy some adorable, well crafted pixel art in the process.

When Death stalks in with a cute skirt and symmetrical pigtails, you know you’re doomed, but is that really such a bad thing?