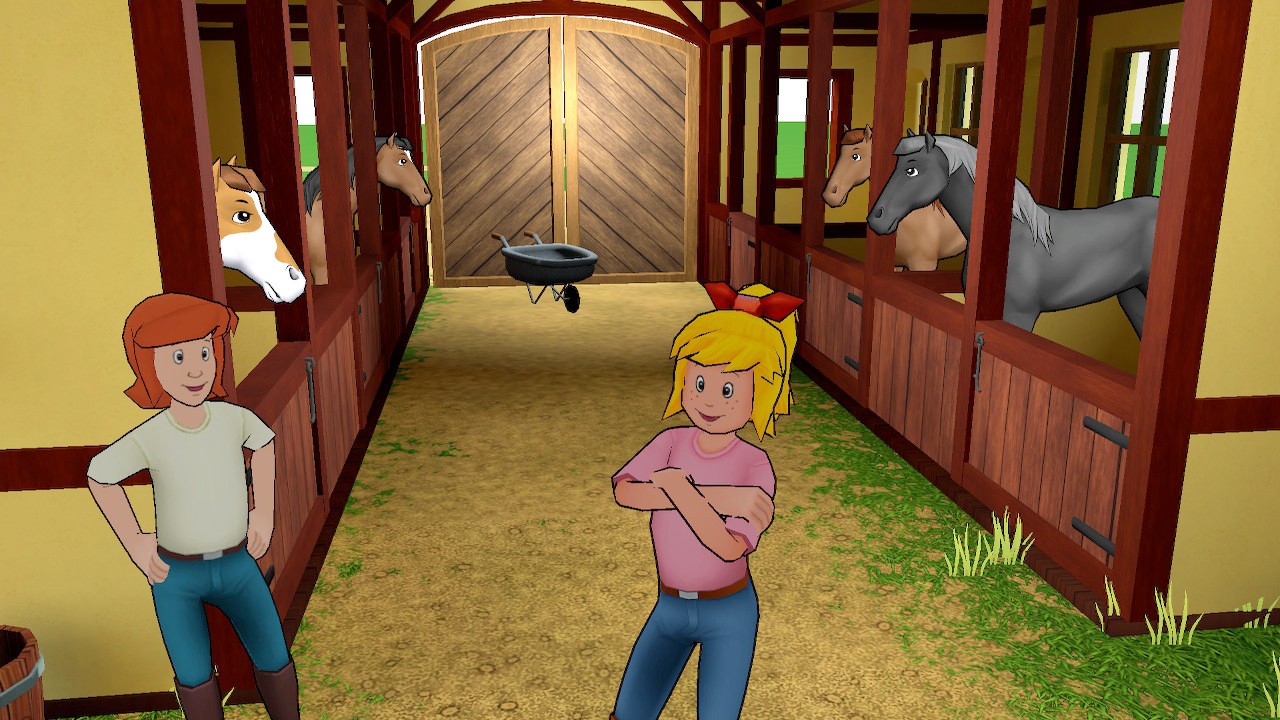 You might be asking yourself: why on earth are we reviewing two different horse related games this week on Bonus Stage? Could it be that this is equestrian week somewhere in the UK? Or have I just developed a particular interest in reviewing games that are clearly marketed at children? The answer, dear reader, is none of the above. Sure, I definitely was morbidly curious in looking into these games, because, for every generation, there tends to be one of those titles that stands out in a way that makes the average player scratch their heads. We’ve all had the heyday of things like Superman 64, Corey in da House of Garfield Kart Racing, but the Nintendo Switch hasn’t had a truly standout title that is both terrible and compelling just yet. The good news, at least for developers with TREVA, is this game isn’t terrible, not really. But it also isn’t necessarily compelling in the same sense of the word. Which is why we have, here, Bibi & Tina: At the Horse Farm, written with just a touch of disbelief on the keys.

Fun story: I already wrote a review for Bibi & Tina earlier last week, but I was apparently not versed enough and mostly unaware of the world of Bibi Blocksberg and German radio dramas from the 1980s to understand that I was reviewing the wrong game. See, there are three (3!) Bibi & Tina games out there, and this is the second game about horses. The other title, Bibi & Tina: Adventures with Horses, is a very confusing game that is entirely based around a movie that none of us have seen and also came out five years ago. Naturally, I didn’t know that was different from “At the Horse Farm,” so I played it, tried to make sense of it, and then found out it wasn’t even the game that is taking the spotlight. This is a word of caution for all of you, lest you get super into the idea of this title and accidentally buy the wrong game. Keep in mind, there are a lot of things that are, at the core, identical between the two, but that’s neither here nor there.

Bibi & Tina: At the Horse Farm is an interesting and slightly strange game about two young animated girls who are performing missions in and around the German countryside. Per the backstory about Bibi and Tina, you should know that Bibi Blocksberg is a teenage witch, and she is able to do several feats of magic in both her radio drama and her animated television series (which is where this game draws inspiration from in terms of character design and plot points). However, Bibi never, even once, does magic in this game, and it makes no difference if she is a witch, a fairy, a vampire or some kind of alien. She just rides horses. You can choose between being either Bibi or Tina as you set out, and you often have to perform tasks that involve riding from point A to point B and getting there in a set amount of time. You may also need to hit checkpoints along the way, and this is…sometimes challenging. It’s an interesting dynamic because it’s challenging in design, but also in, well, glitchiness. 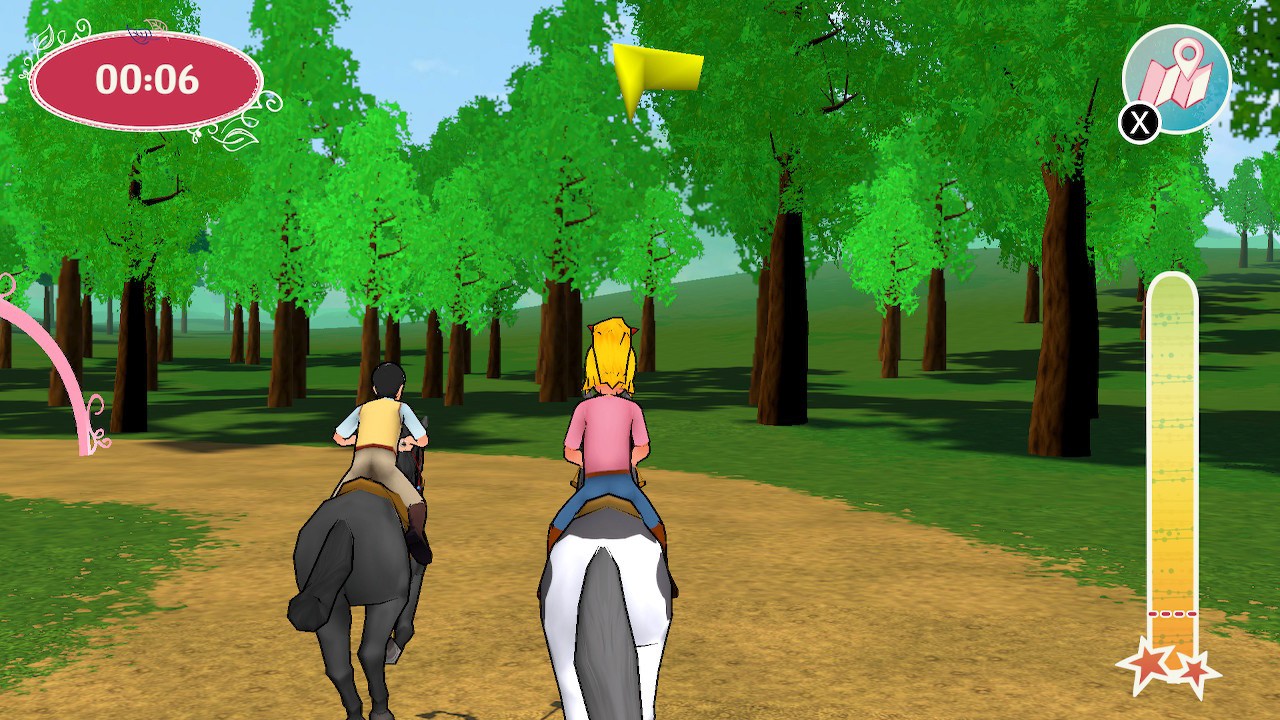 With Bibi & Tina: At the Horse Farm, the controls are wonky from the very beginning. To move the horse, you push forward, and steer left or right. Fair enough, right? However, pushing forward is never a straight forward movement: you’re always drifting left or right depending on the pressure you apply to the joystick. This is mostly counterbalanced by your “urging” of the horse, which is a dash bar that you activate while pressing A. If you never used this bar, you’ll never finish a single mission, because the core trotting speed is unbearably slow and should only be used in tight emergencies. With the dash bar, you push A over and over to get the horse up to a gallop, but be careful: if the bar bottoms out, then the horse “bucks” and you stop. By buck, I mean the horse often comes to a dead stop wherever you are and whinnies in protest. There is no danger of being thrown from your horse here. There is no health bar for Bibi or Tina. Their lives are protected. Maybe that’s the magic Bibi is casting over this whole game, to keep her and Tina alive in spite of terrible horse management.

The game simply looks dreadful, and I want to throw that up as early as possible. The character design is clearly lifted from the cartoon, which is cutesy and whimsical enough, but it’s then imprinted on a wireframe character, causing the facial expressions to appear manic and static. You often see Bibi and Tina from behind, so it’s just their own simple body forms that sit astride one of several horses. There was effort put into making the horses unique and different (and customizable, but we’ll get to that later), yet there’s something inherently off about the beasts. When you get a closeup and start to add accessories or hair highlights, you end up seeing their snouts are too long, or the manes are jagged, and it feels super strange. I liked adding hats and color streaks to my horse as much as the next person, but it still didn’t make me like looking at them.

The poor look of the game is then countered by the poor performance. There’s ambition with Bibi & Tina, and the maps, surprisingly, are huge. When you aren’t doing missions, you can do a free ride to explore the different areas, and the land is sprawling, far more than I would have guessed for this title, and there are 96 hidden packages to discover in each of the free ride maps. These packages unlock extra modes and horses, so it’s fun to do, in theory. In practice, you start to see the game really suffer under its own demands. The draw distance for everything creates a weird, ghostly effect where trees don’t exist, then become vague brown crayons, then jagged stalagmites in the German countryside, and, finally, trees. The horses do not like being driven into trees, and they actually seem to whinny and protest stronger from hitting solid objects than being ridden too hard. You’ll see the game stutter, freeze and jump around in the map as it tries to comprehend that you want to leave the path and take the more direct route to get to a package off in the distance. Several times, I saw checkpoint rings hanging in the air, and it would take a couple of seconds before I got close enough for the game to register they were connected to a tree (and then I connected with a tree). As someone who isn’t invested in this series, it was frustrating: I’m trying to imagine a child playing this and getting utterly depressed that they keep missing their goal time because the game isn’t playing fairly with the map. 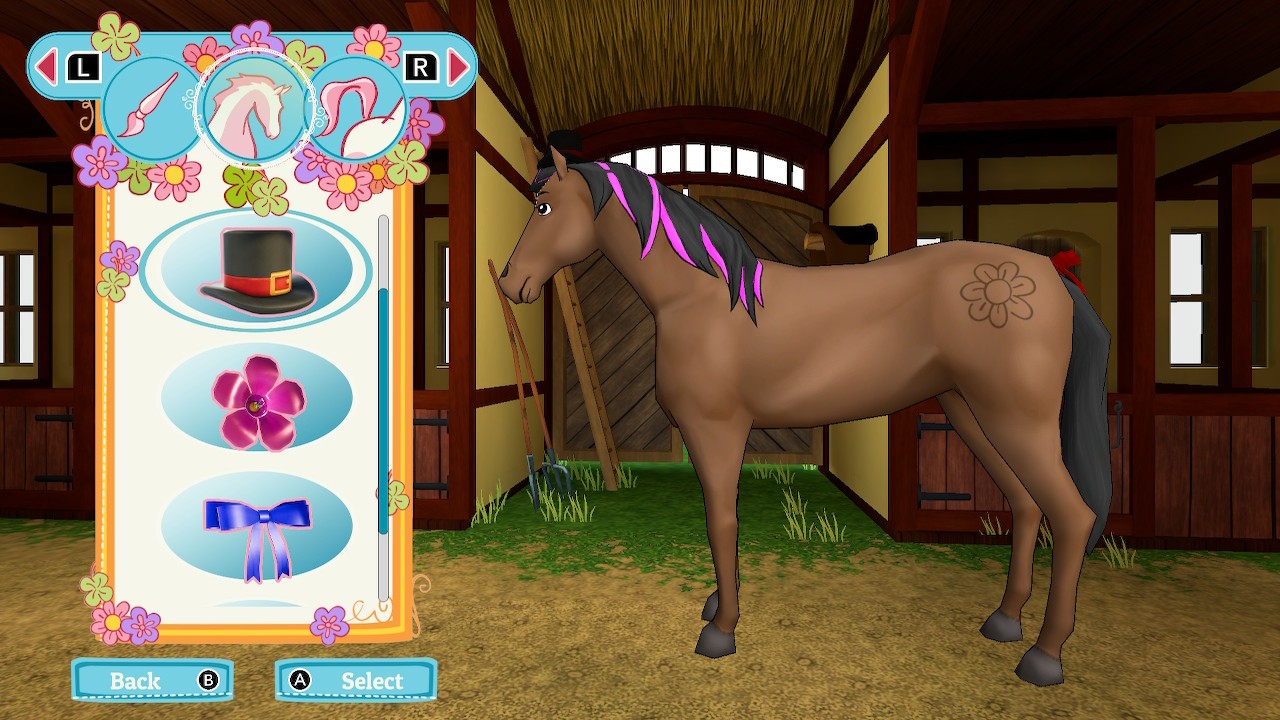 Once you spend an ungodly amount of time doing the very boring missions (ride in this straight line until you get to a place!), you can, eventually, unlock the mini games about horse grooming and customization, and those are cute and fun enough. Bibi & Tina really wants to appeal to that rare breed of child who loves horses and wants to do everything with horses, but doesn’t care enough to learn that horses don’t enjoy being colored or given hats. The grooming mini games, which usually involve brushing in a time limit, have their benefit, and make your endurance meter hardier (and there are some additional endurance goodies to be found out in the free ride missions). But these modes should have been unlocked much, much earlier. As an adult, I see my kids really love doing the silly little games more than the main meat of things, and this is the case with Bibi & Tina. It doesn’t feel rewarding to do the mini games after slogging through several checkpoint riding missions. It feels like getting a Christmas bonus of one of those giant tins of popcorn. Like, thanks, it’s a good gift, but I did eighty hours of unpaid overtime in November, maybe lead with something better?

Bibi & Tina: At the Horse Farm has replay value and longevity in that it takes a long time to do everything in the game, but you see all you need to see in the first 15 minutes or so. If you need to unlock ALL the horses and find all the goodies, sure, keep hitting the free ride trails and keep grinding out those missions until you 100% this bizarre game. Most players out there, though, are going to grow bored and be done with this game after just a few moments. Please, only get this if you’re a fan of the television series or share a household with someone who does.

Is this a must play this holiday season? Discerning young witches answer “neigh.”