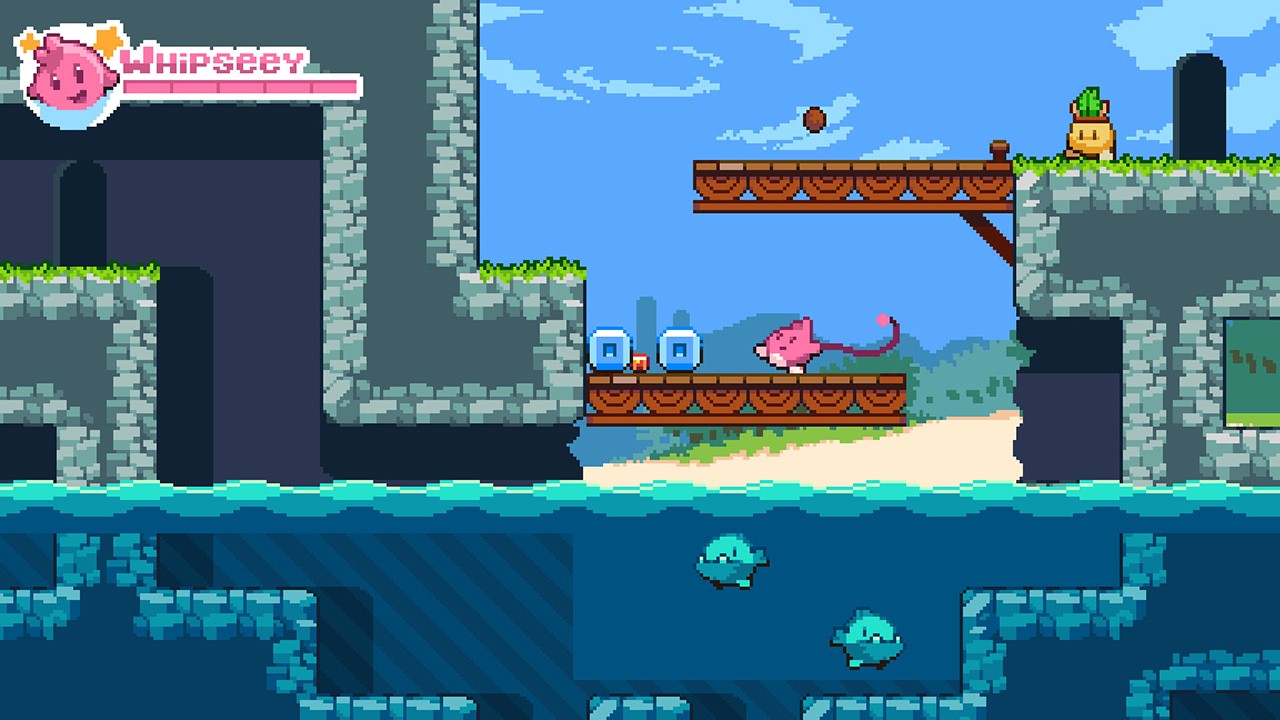 Whipseey and the lost Atlas is another retro inspired platformer that has found it’s way onto the Nintendo eShop. In the game, you are transformed into a small, pink blob and expected to traverse five lands collecting gems and completing stages. The game obviously borrows ideas from the Kirby series, as well as other late NES platformer games. But the real question is, in a market full of retro inspired titles, does Whipseey measure up? Or does it require another crack of the whip?

The game is a simple platformer, reminiscent of Kirby’s dreamland and other similar titles. This provides the simple premise from the start, cross the various worlds and reach the goal. The controls are simple to understand with typical mechanics such as jumping and attacking with your whip. Whipseey can also use his whip to slowly fall; the whip acting as a helicopter blade. He can also use the whip to lasso onto specific rings and swing across gaps.

Enemies in the level have a very distinctive feel and you would be easily mistaken for thinking you were playing a Nintendo first party title, with enemies looking just slightly different from their obvious inspiration. Most enemies can be dispatched quickly with the whip or by jumping on them and most leave behind gems to collect. Boss battles are slightly more complex, but follow the tried and tested formula of “learn the pattern” and “take your time” in order to complete them. 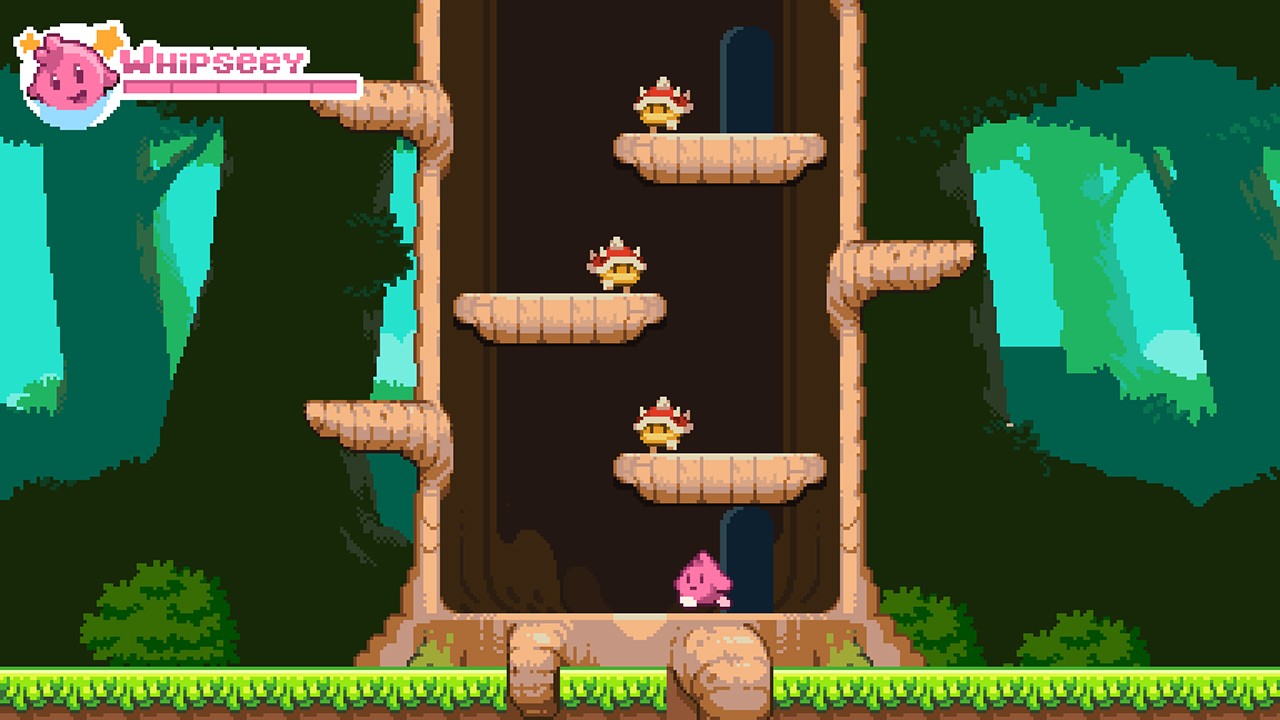 Overall, levels aren’t too challenging, but in order to try and drag out the length of the game, the placement of obstacles often makes for a frustrating case of “insta-death” which prolongs levels needlessly. Putting that to one side, Whipseey has a number of hit points available for enemy damage before being sent back to the start of the level.

The main reason I feel that the insta-death mechanic is utilised, brings us nicely to the first main flaw in the game. It is incredibly short. With only 5 worlds to explore, the more seasoned gamer can complete the title within an hour, making it a fun distraction for a lunch break or a short trip perhaps, but not really providing the depth that most people would want from a platforming game. Add to this that the theme of each world is often very generic, featuring the tried and tested tropes such as “grass land” “desert land” and “cave”.

Graphically, the world of the Lost Atlas is a beautiful rendition that would feel right at home on a Super Gameboy/Game Boy Advance title, with a wide range of colours well designed and animated sprites. But again, with so few worlds to explore, it just made you wanting to find something more to make the title feel worth it. One of the best examples of the beautiful world design the game presents, is in the train ride level, where you see a beautiful contrast between the toyland blocks and the snowy facade. 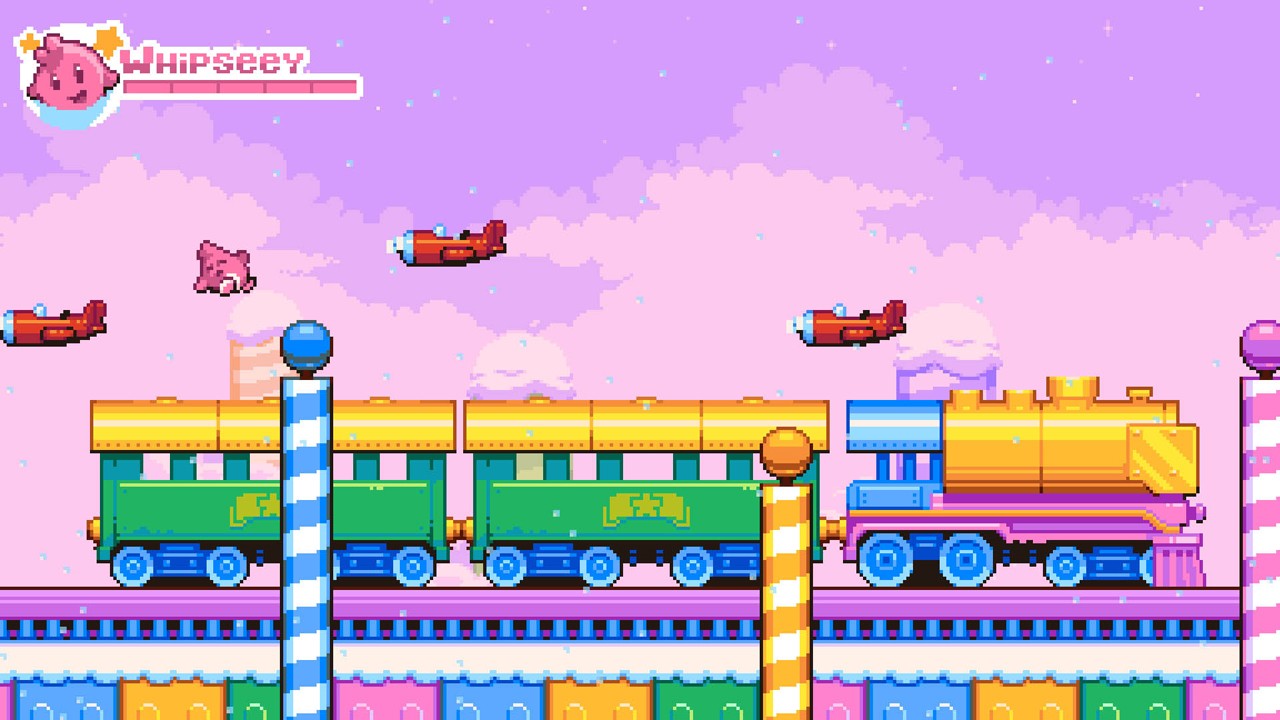 The soundtrack works well with the game too and has been well thought out. The levels all contain melodies which make you feel immersed in the theme of the level, but again, with the insta-death and possible repetition of the levels, will make these tunes start to feel dull and the short length of the game means that those who do complete it quickly will quickly forget the soundtrack, as the game has no replay value besides wanting to see or hear a specific level again.

Overall, Whipseey and the Lost Atlas is an OK platform game, with beautiful graphics to complement some good design ideas. But there simply isn’t enough breadth or depth in the game to justify paying what is £1 per level at full price, but if you are looking for a quick, simple adventure, or trying to introduce a younger player to the often more challenging retro gaming design, then this isn’t a bad title to pick up. The real issue when deciding whether to recommend the game comes from the fact that there are just so many other retro themed titles on the market, both at the same price or less, or offering a lot more content for their price.  Keep an eye out for it in an eShop sale perhaps or wait and see if a sequel is made and the game is turned into a bundle if you are in two minds.

Whipseey and the Lost Atlas Review

With the inclusion of frustrating insta-death mechanics to prolong the gameplay make it a title that seasoned players will breeze through and less experienced players may feel frustrated by.