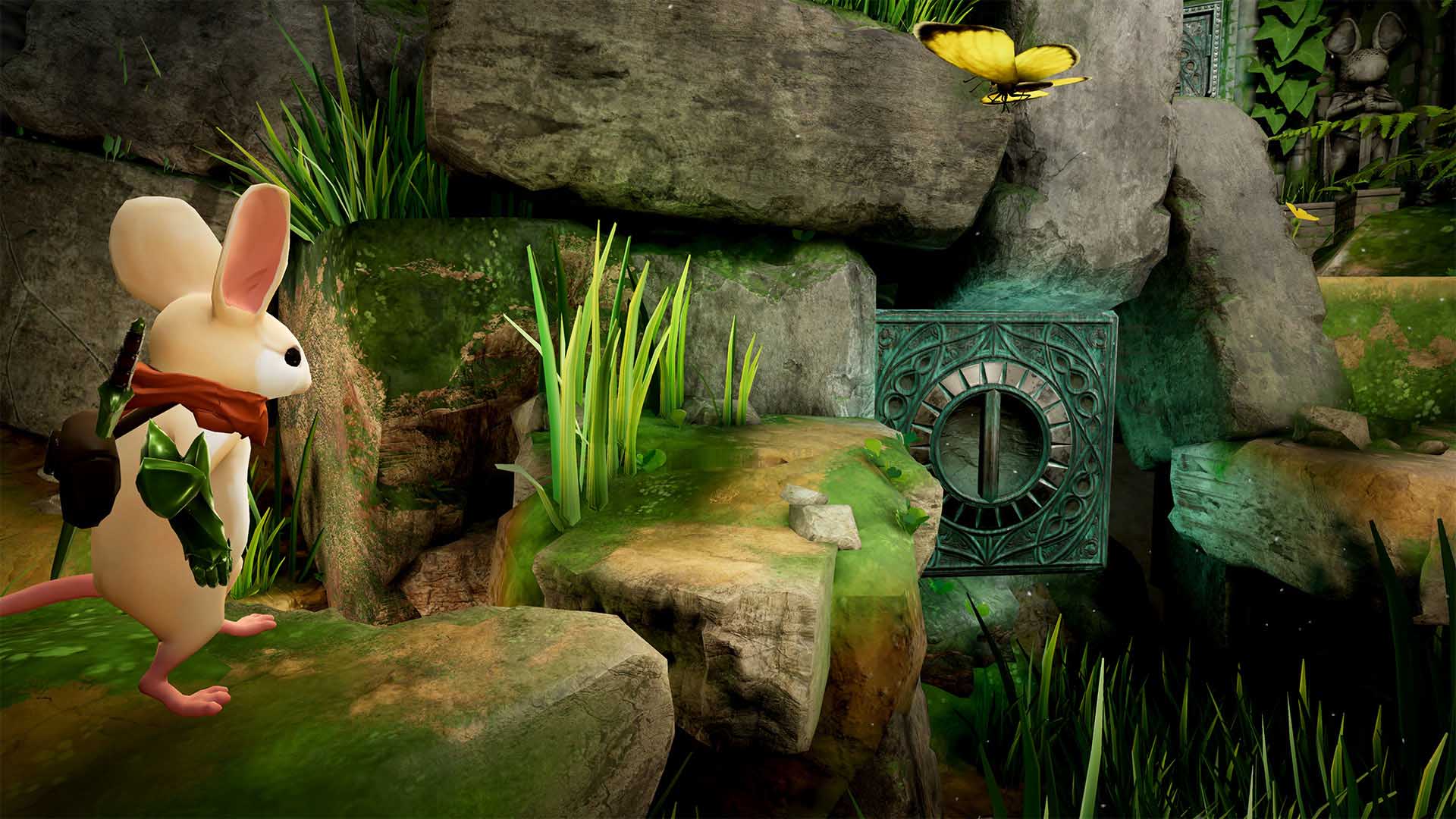 I’ve been looking forward to playing the complete version of developer Polyarc new VR title Moss ever since I played a small section on last year’s PSVR demo disc 2. And I must say that watching gameplay snippets on YouTube or other social platforms does not do Moss justice, it should be viewed as the developer originally intended to really get the full ‘Wow’ experience. That 20-minute demo introduced you to a cute little mouse that you briefly assisted in traversing a few simple environmental puzzles but the demo ended very quickly leaving you inevitability wanting more and a long wait for the full release.

Luckily the full version has now finally arrived and it’s as good as I hoped it would be. Those early demo sections are still exactly how I remember them and gradually playing through I find each stunning level improves on the last in every possible aspect. It’s quite simply a perfect slice of gaming magic with VR bells and whistles to boot.

The beginning places you in a stunning realised gothic cathedral with an unopened book, you the player have control of what can only be described as a blue orb via the Dualshock light bar. With a press of the R2 button you careful open to the first page beginning a subtle but superb narration helping to fill the back story on the characters and your future quest. Once the narrator finishes you drift into the book to play “the reader” a masked figure (think man in the iron mask) who hovers just above ground level and must help Quill, the cute mouse to traverse the environments in search of her missing Uncle.

The viewpoint in Moss is a fixed 3rd person which instantly reminded me of a title I reviewed last year called ‘Theseus’. I found this viewpoint to be quite experiential and original especially as you come to expect VR titles to be in the 1st person for the obvious reasons and I’m glad it’s been used again in Moss. 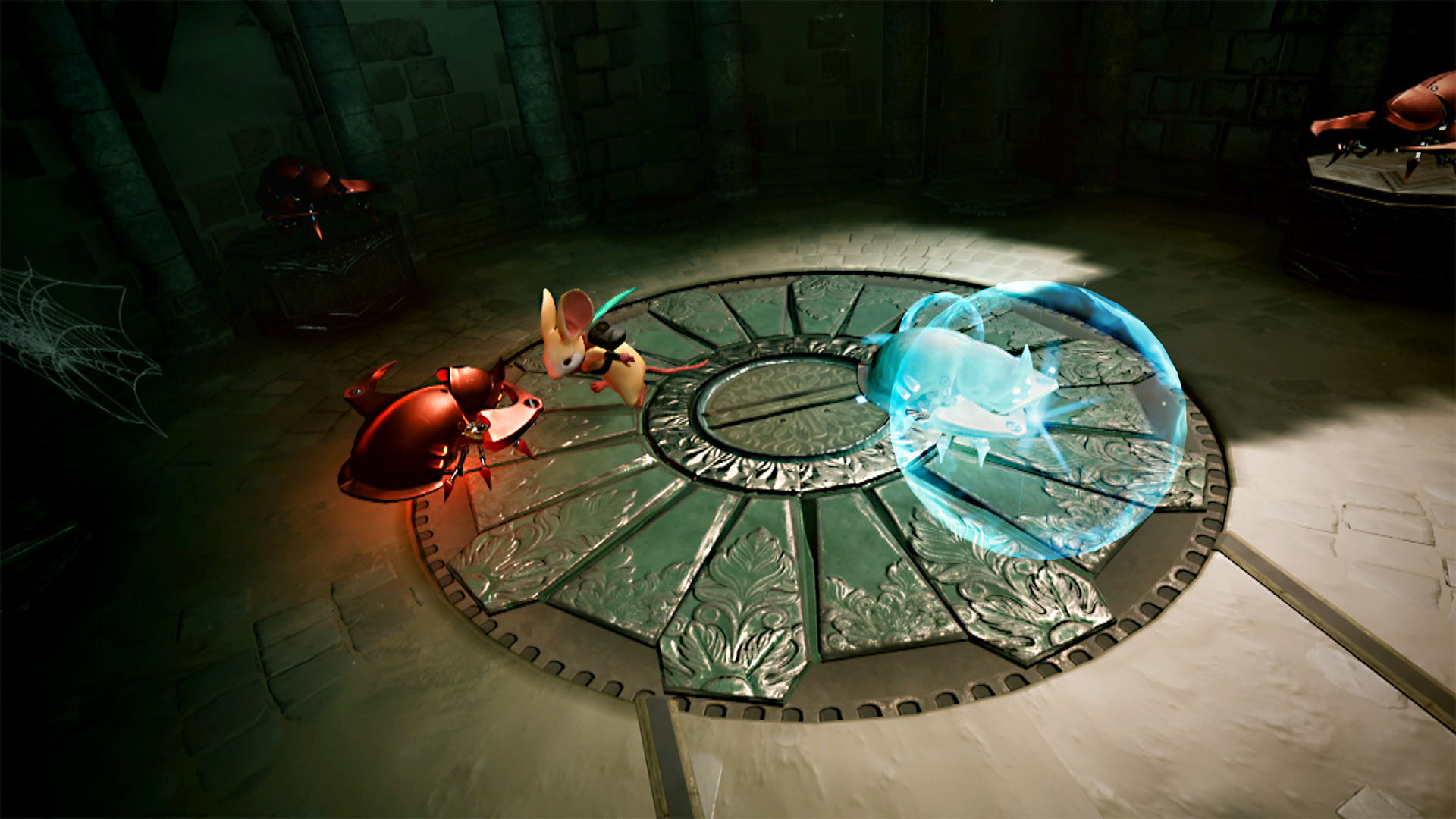 During the adventure you are tasked with simply assisting Quill either by environmental puzzle solving or fighting the small variety of enemy’s hell bent on stopping her, and for a nice change it’s all done with the Dualshock 4 controller.  You manoeuvre Quill using the left stick, help defend with the square and jumping is mapped to the X button. The puzzles are nicely linked to the light bar highlighting the specific item you want to move using the onscreen blue orb I mentioned earlier and then holding both L2/R2.

All the levels are hugely varying in both scale and environments, they have been stunningly created with a 3D pop-up book look to them which is very reminiscent of the brilliant PSVR short movie Allumette. Each set piece fixes you directly in front and slightly above the environment’s but you have the added ability to move and look around everywhere.  Leaning into the lush forests or peaking behind the walls or walkways aids progression and gives you a feel of complete visual freedom even though you are ultimately looking at the page of a pop-up book. And making the effort to look around these beautiful surroundings admiring and investigating every pixellated inch offers up both hidden treasures (if that’s your thing) and helps demonstrate how small you and Quill really are within the environment’s.

The puzzles are simple to begin with but require more thought and planning as you progress and at no point do they ever hinder the adventure as Quill is quick to point you in the right direction should she feel your struggling.  Basically, moving blocks to complete a path or creating gaps small enough to jump across are as difficult as the puzzles get.

Combat is also a simple affair with only three different enemies to defeat but you can also use them at certain points to benefit progression. Quill carry’s a sword to help defend herself with in case any manage to get to close but you can also help by using the enemy’s weapons against each other to assist in opening locked sections or to reach higher areas. This is achieved by taking brief control of some of the attacking enemies to position them on a pressure pads, shooting switches or even shooting each other. This level of combat may be too simplistic for some gamers but the heart and soul of Moss is obviously in the relationship you gradually attain with Quill and not with how many enemies you kill. 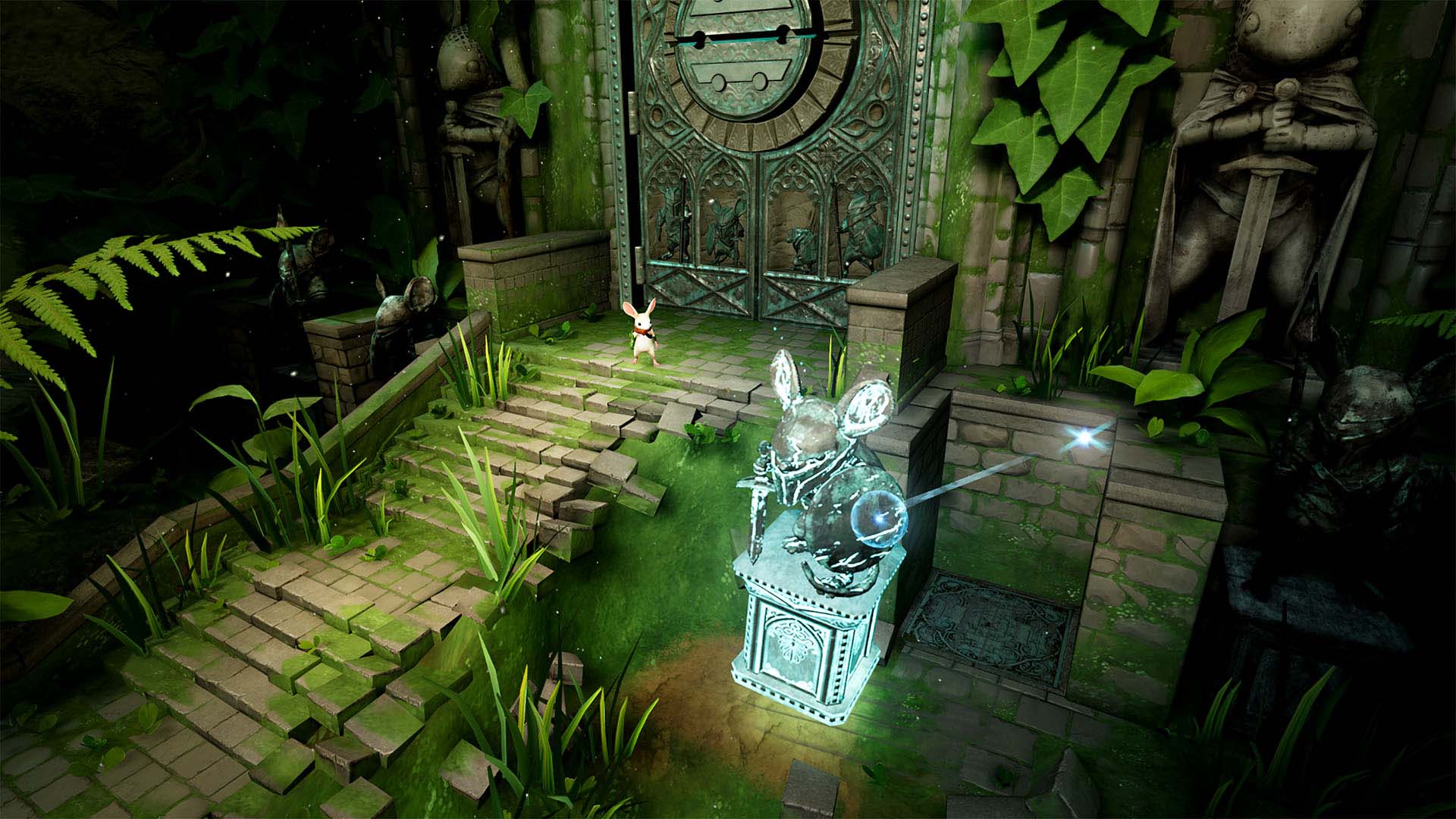 Guiding and helping Quill through each individual set piece is just thrilling as she will constantly interact with little hand gestures or facial expressions showing you her gratitude or confusion and gradually this builds a great rapport with you “the reader” and Quill the mouse. And it’s these little personal interaction moments that really give you that feeling of achievement when she makes it safely to the next page. And I say ‘page’ because Moss is basically a narrated story with each level being a single page of the book. Whenever you reach the end of your current screen it darkens with the sound of a page being turned and you either find yourself in a completely different environment or back at the cathedral for a story update.

Overall Moss is probably one of the best PSVR titles there is. Beautifully clean and crisp visuals with equally impressive sound and level design, challenging but uncomplicated puzzles and combat, with a character so well animated you can’t help but admire the intricate details designed to draw you in too both Quill’s world and to care for her ultimate wellbeing.

Yes, it’s a short adventure running in at about 4 hours and costing an eye watering £24.99, and as many of my readers will know I’m not a fan of overly expensive short VR titles but this game has my forgiveness as its four hours that draw you hook, line and sinker into a mesmerising tale of love and adventure. It has perfect old school simple gaming mechanics with faultless VR and motion tracking which all in all finishes with a game that genuinely leaves you with a feeling of utter achievement and in a surreal state of happiness.

I can’t recommend Moss enough and I for one will be demanding more from developer Polyarc because for the asking price we deserve a little more and secondly because another adventure with my new best friend Quill the mouse is definitely on my most wanted list. Almost perfect in every way except for the short playtime.