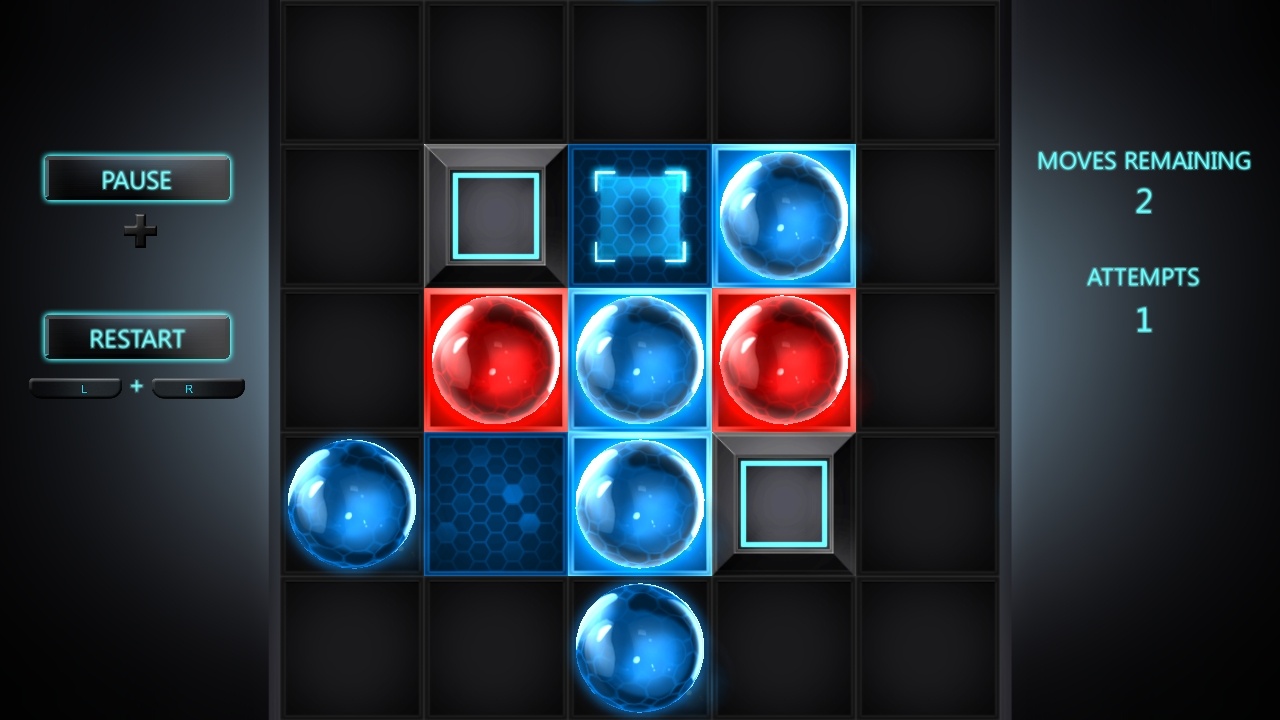 What is it that makes a good, compelling puzzle game? In my experience, it always boils down to simplicity. The simpler the mechanics of gameplay, the more enjoyable the puzzle. After all, it’s bad enough being set complex challenges, but having to be bombarded by a slurry of overwhelming extras only helps to confuse things. Thankfully, Grid Mania, a game developed by FX Valley and published by QubicGames, is so simplistic in its values, that it all turns out to be rather mind-boggling.

The premise, here, is simple. Over a series of grids, that range from 4×4’s up to 6×6’s, you must manoeuvre a series of coloured balls to the specifications that, whatever game mode you play, are required to fulfil whatever criteria is set. I say ‘whatever game mode you play’ as Grid Mania has four different varieties of game to play, which all adds up to a total of over one hundred and seventy different levels to test your mettle.

The first mode, casual mode, is probably one of the easiest variations with which to get your head around. It works by having a set number of balls with a set number of corresponding, coloured squares. Your objective is to slide the balls along the grid, much like the old-fashioned, plastic sliding puzzles where you had to create a picture, and line each ball onto its suitably coloured square. It all sounds rather simple in its execution, but with certain elements in place around the gameplay mechanics of the puzzle, it soon becomes quite a test. You see, as you slide the balls around, the other balls in the same row, or column, also move in the same direction. You do have a certain amount of freedom with your movements, in that you can slide the balls off the top of the screen and move them to the bottom, as you can left and right, and this is quite often the key to success. However, it can also be just as easy to get all your balls lined up, only for one movement to completely undo everything you had done. You really do need to stop and study the effects of each move before you make them. Although one of the more forgiving modes of play, as you progress further the introduction of blocked off squares and extra colours, significantly ramps up the difficulty level. 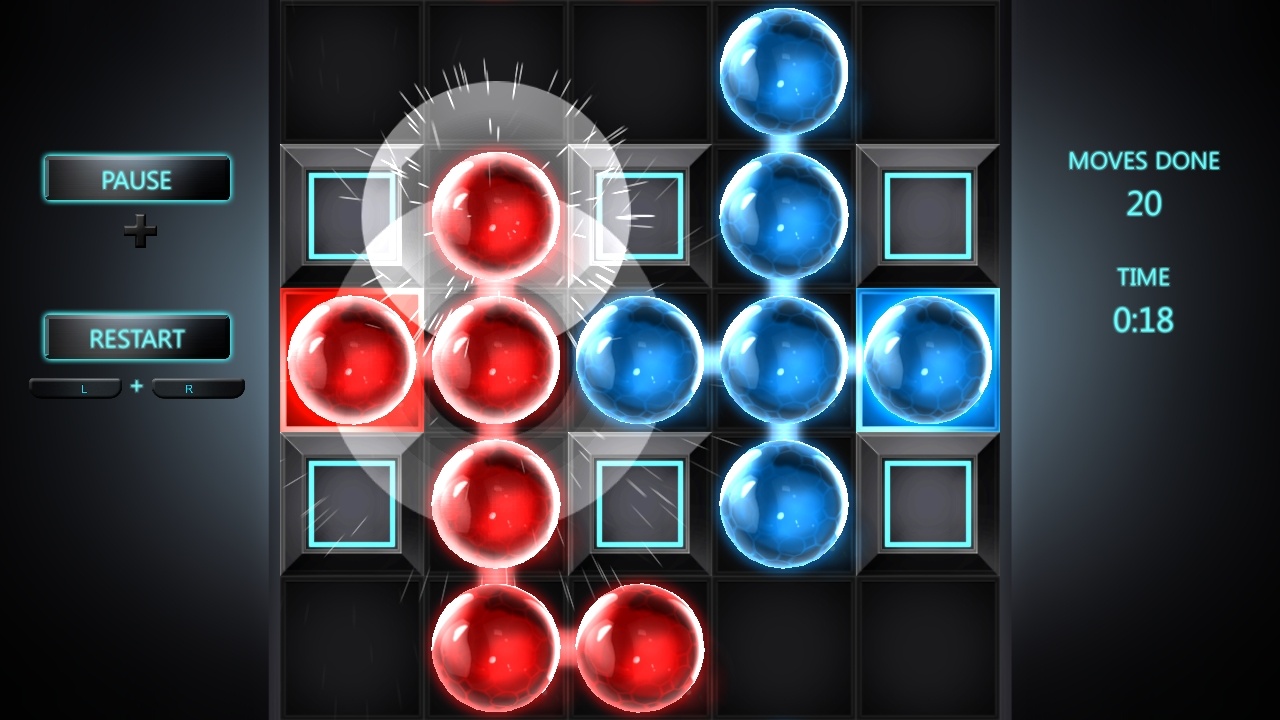 Another mode is the Quick Challenge and this is probably the least forgiving of all the games available. Running along the same lines as the Casual mode, these sets of puzzles introduce a set number of moves in which you must solve them. Overstep the mark and you need to start the whole grid over again. You have no choice, in this game mode, but to sit and study the grid before you make your move. The game also tracks how many times you fail each puzzle and taunts you with its unforgiving totals.

Grid Madness offers a variation to the style of gameplay from the other two previous modes. The objective of these set of puzzles is to align a row, or column, of three balls of the same colour. This in turn, makes the balls disappear and colours the squares, upon where they once lay on grid, in a corresponding colour. As other balls begin to appear, it is your objective is to fill whole grid with coloured squares in order to solve the puzzle. This game mode offered a more relaxed, rather than complex, set of puzzles and brought a nice change in its objectives.

The final offering is Chain Reaction. In this mode, you are presented with a single square, within the grid, that is highlighted with the colours that are represented by the balls within it. Your goal is to move each set of balls so that one of them sits inside the square and the remaining, similarly coloured balls, sit adjacent to the newly filled square. Again, this was a very challenging game mode but also brings another variety to the board.

When you have completed the game and finished all of the levels, which will take you a significant amount of time, a further element is added as the game introduces a series of randomly generated levels to keep you going. This is a nice inclusion as it keeps the life of the game going indefinitely and offers many, many hours of solid puzzle-solving game play. 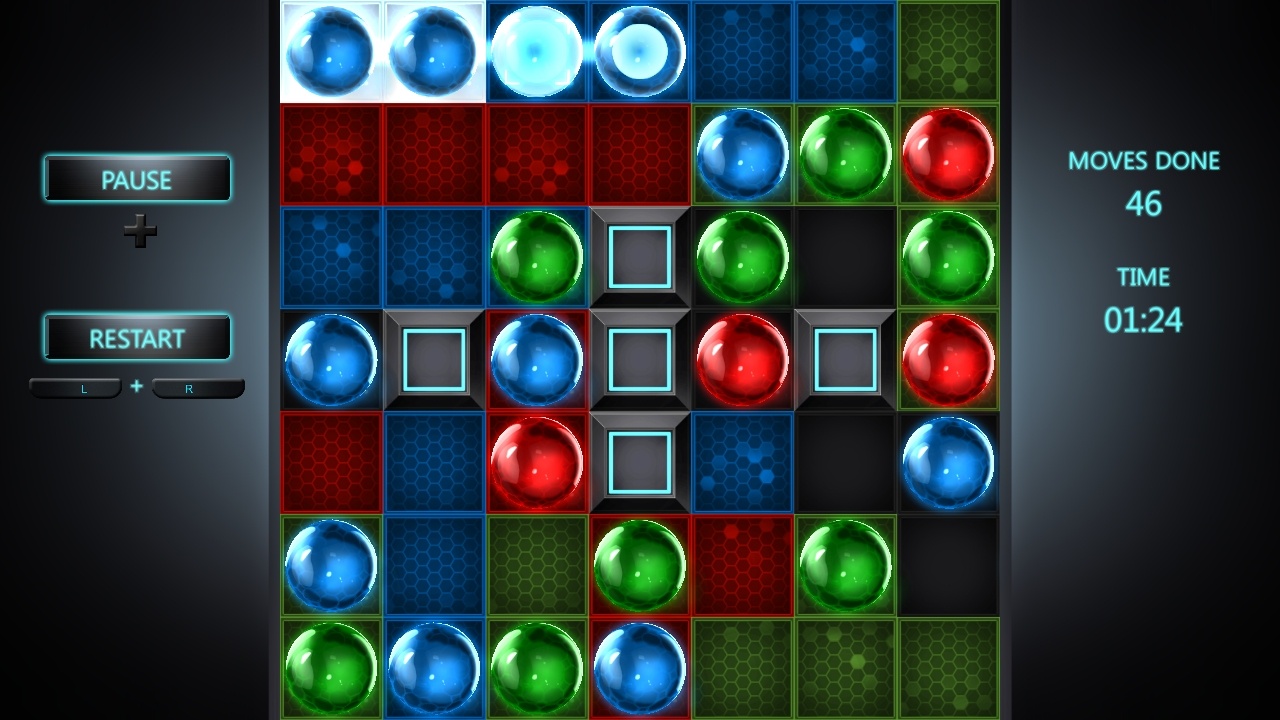 Each of the different game modes guides you in gently as an introduction to its mechanics, with simple to follow instructions and solutions to their completion. However, it doesn’t take too long for the difficulty of each challenge to significantly spike. This doesn’t make the game overly frustrating, as with careful thinking and planning you’ll soon find your eureka moment which is immensely pleasing and satisfying. With its simplicity of gameplay, Grid Mania is a game that possesses an engaging and addictive premise with its ‘one-more-go’ mentality and brain-teasing puzzles.

Aesthetically, there is nothing particularly new or ground breaking here. Much like its gameplay, its production values are very simplistic with a basic viewpoint for each puzzle on offer. Its presentation is nothing more than a grid with coloured balls and squares; all placed upon a simple, black background but it functions perfectly well and is suitably adequate for the style of game that it is. As well as a pause and restart button, something that you’ll probably use a lot, the screen also offers information on time taken for each puzzle, number of moves taken and, in some cases, number of failures. Despite its simplicity, the look of the game does possess the sheen of a modern, technological style of graphical presentation and also has some background music to match. However, despite its electronic beats, the soundtrack does become quite monotonous after a while and often distracts from the concentration required for each of the puzzles, although you do have an option to alter its volume or turn it off completely.

Overall, Grid Mania offers a nice little package with a lot of content. Its mind-boggling puzzles are suitably satisfying and its variations on its basic premise have enough quality that they could easily warrant their own separate releases. With the full use of the Switch’s touchscreen, as well as a suitably comfortable control scheme, this is a game that both young and old can play, although the complexity of some of its puzzles may require a helping hand for the younger audience. For its pocket-money pricing, this is a game that contains a lot of hours of gameplay, however, it must also be said that this is a game better off played in short bursts as it can soon begin to feel repetitive or frustrating with a more extended session. If there is one complaint, then it would be that the game doesn’t come with a warning in its ability to melt your brain, as some of its challenges are so fiendishly clever, that you’ll have trouble keeping it cool.