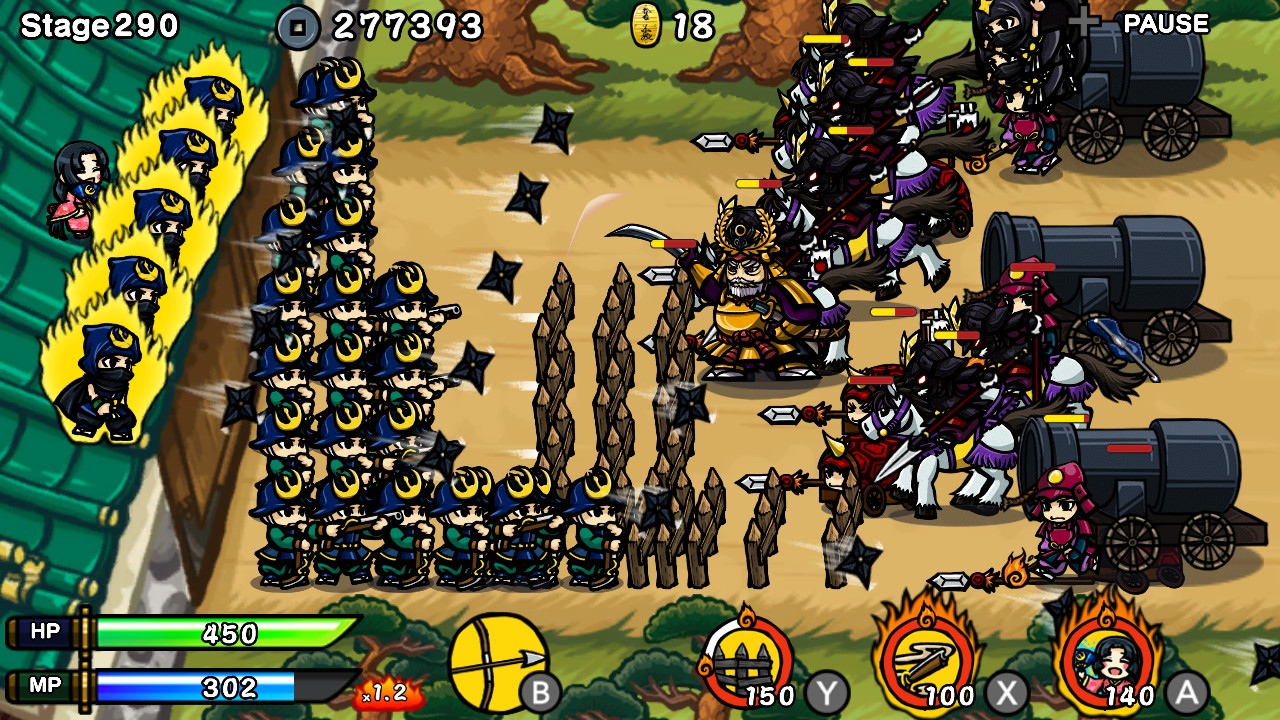 There used to be a time when the words ‘Tower’ and ‘Defence’ would send a shiver down my spine; the same could also be said for ‘Samurai’ and ‘Ninja’, too. As gaming genres, or content, I’ve never found any of the above to produce a title that I was ever to gel with, or appreciate its worth. So, you can imagine how I felt when I came across an amalgamation of the two with Flyhigh Works’ Samurai Defender: Ninja Warfare, a tower defence game, incorporating samurais and ninjas, that’s out now on the Nintendo Switch. As you can imagine, I wasn’t expecting great things.

Set in Japan, obvious really by the title, you are tasked with protecting the gates of your castle as a marauding, invading army attempt to break through. Its mechanics work with you, a lone archer, nestled above the gate on the left hand side of the screen, whilst a variety of warriors and weaponry make their way from the right; trundling along a path to reach the gates of your castle in order to break it down. It sounds like a simple premise and one that’s certainly been done before. However, despite its similarities to other games within the genre, it’s the towering values of its gameplay that brings a defence to its style.

The game eases you gently along the first few incursions from the enemy force; with each break in-between battle offering you guidance on how to navigate menus, commence attack and upgrade your capabilities. With each successful bout, you are awarded experience points and a variety of coins that are used to purchase upgrades, or stratagems as they are referred to in-game. These come in a number of forms, ranging from increasing the damage output of your arrows, or making them faster, to extra archers, barricades and varying classes of ninjas. As well as these, you can also purchase abilities that call upon reinforcements or carpenters who can repair damage. 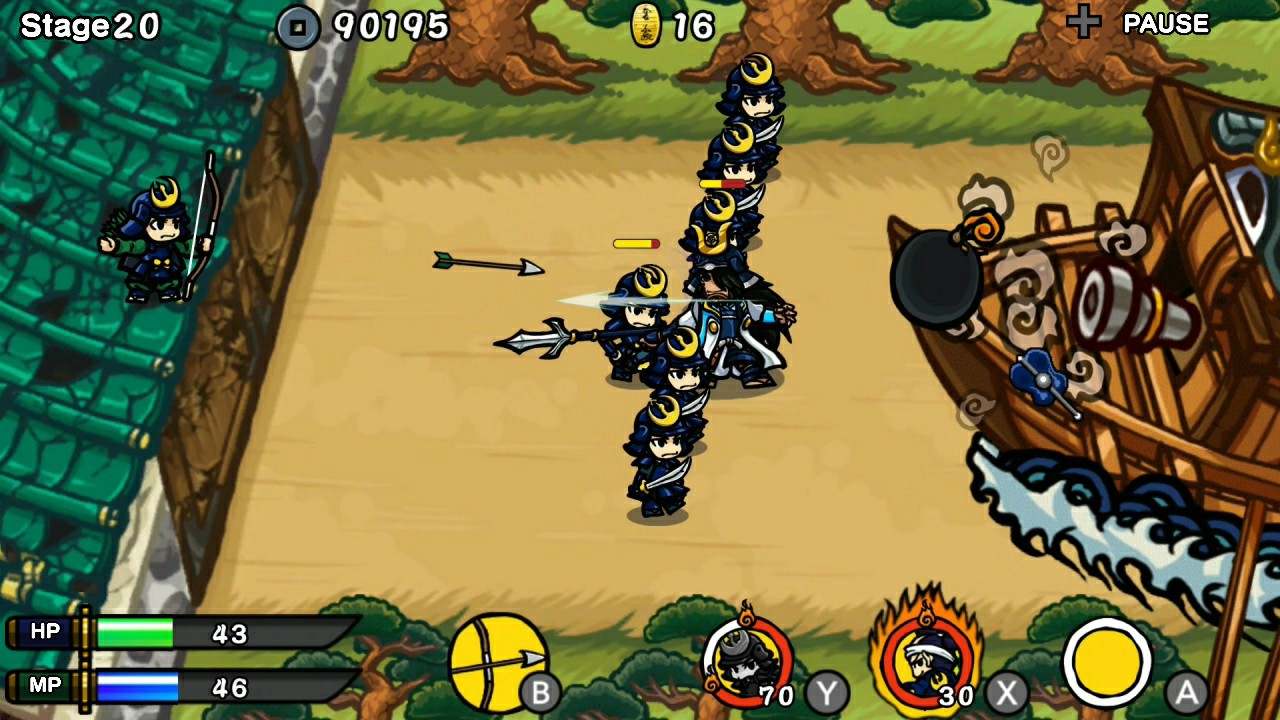 This quickly becomes an important factor within the gameplay, as the enemy begins to add a variety to its warriors, attacks and numbers; the latter soon filling the screen as you battle against seemingly impossible odds. However, with increased firepower, defensive placements and backup help, you can put up a reasonably good fight. In order to keep the attackers at bay, you pin-point locations for your archer to fire towards. This can be accomplished through the use of the Switch’s touchscreen, or with a conventional control method that sees you moving a cursor to position and ordering your archer to fire by pressing the B button. Whatever scheme you opt for, both are pleasingly executed.

Once ordered, your archer continuously fires arrows in the direction in which you stipulate. Depending on speed and power, it’s a manageable prospect as you learn the mechanics of the game over the first few levels. However, every ten levels or so, the enemy forces send in a boss to bolster their attack. You’ll need a level head to combat their advances, often producing special moves or colossal vehicles and machinery to try and advance. This is where your backup comes in, as you try to repair damage or stifle the advance of enemy attacks. However, these abilities can only be utilised with the reserves of your mana, or magic power, signified by a self-recharging bar, with each unit costing varying amounts of your magical abilities.

Due to the overwhelming numbers of warriors, or size and style of enemy attacks, there will undoubtedly come a point where you simply cannot manage to defend your castle successfully. To be able to advance, you need to grind through previously played levels in order to level up your experience and accrue enough gold to strengthen your stronghold. This isn’t necessarily repetitive in its nature though, as the main bulk of the game follows the same patterns and the rewards for doing so build upon the gameplay, thus increasing the enjoyment you can have with this game. The more you progress, or the more you upgrade, the more the enemy throw at you and having the ability to thwart their attempts is a hugely satisfying chunk of what this game has to offer you as a player. 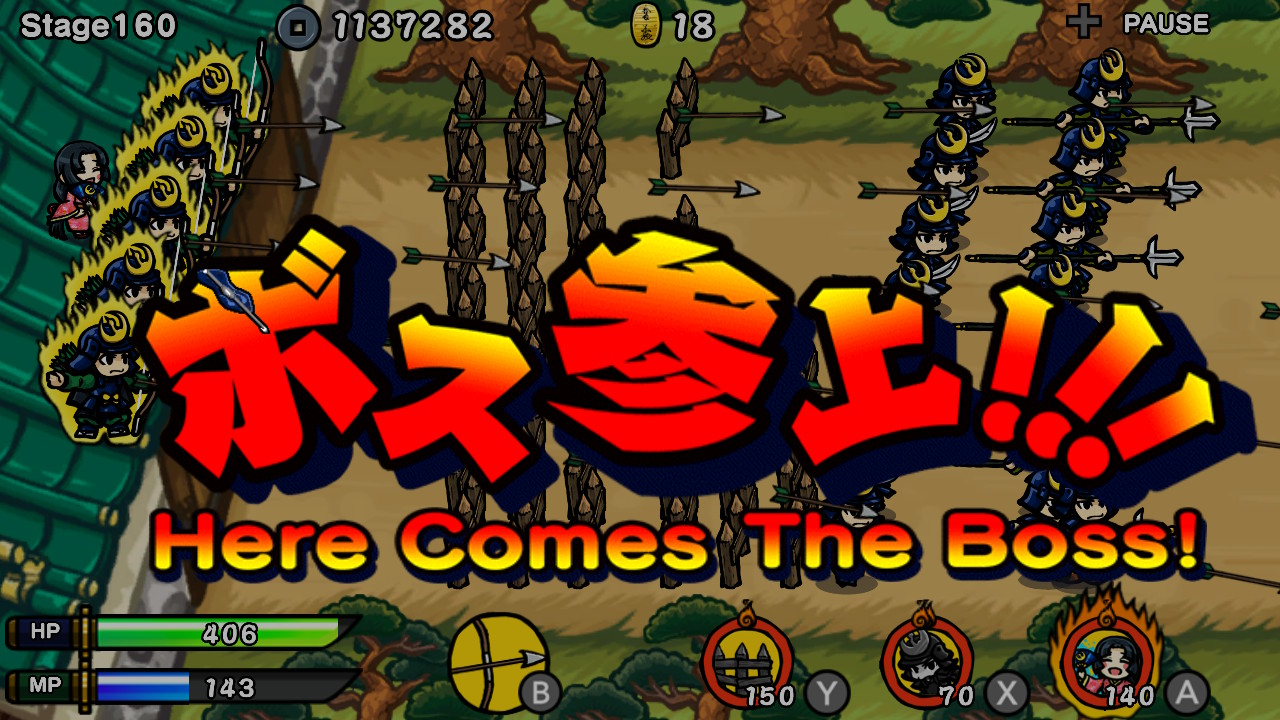 Its presentational values are particularly well done, with a graphical representation that produces characters styled in Kawaii design. It produces a hand-drawn, cartoon style that is bright, bold and colourful, with each of the features on-screen being easily distinguishable. It also boasts a soundtrack that matches the mood of its gameplay, often simulating Japanese tones that play quite melodically. Menus are easy to navigate, with a simplistic, yet detailed design which informs you of everything you need to know in order to upgrade, buy and advance. It all adds to an instantly accessible title that is easy to pick-up-and-play, yet its challenge is enough to keep you playing through its variance of attack and defend options, as well as its generous offering of level counts.

Overall, Samurai Defender: Ninja Warfare provides a fun game with a high entertainment value. Despite its tower-defending genre and origins, plus its design not really bringing anything new to the table, it’s its gameplay values, variations and abilities that make this an enjoyable title. The sheer number of enemies on-screen, as well as the enemy boss battles, each one based on real-life warriors such as Oda Nobunaga and Shogun: Tokugawa Leyasu, bring a real sense of urgency and panic as you try your hardest to defend their onslaught. Yes, you do have to grind. Yes, you do have to replay previous missions. But the rewards for doing so, upgrading your abilities to a point that matches the attacks thrown at you, produces a pleasing mechanic that makes the repetitive nature of the game worth it. The sublimeness of its control scheme further bolsters its playability values, its options fully optimised for use on the Nintendo Switch. Although I was never fan of its content or genre, I have to admit that I was pleasantly surprised by Samurai Defender and it’s a game that I am still continuing to play now and that in itself, is a testament to the playability of this title.