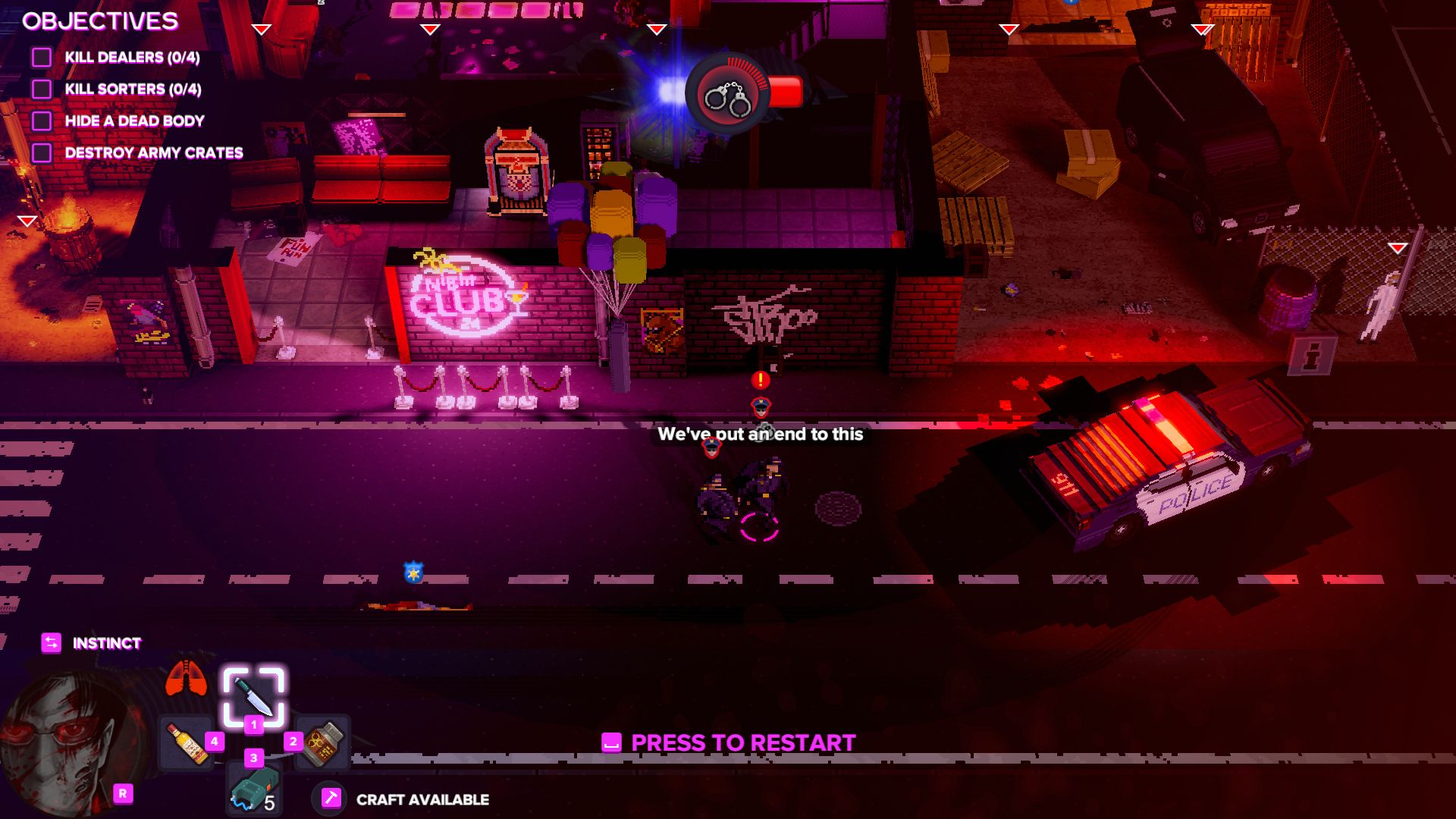 Party Hard has been a title that I’ve followed with fascination throughout the years. I own it on the PC, my phone and, naturally, the Nintendo Switch, where I reviewed it some years ago. Pinokl, the development team, has worked well with tinybuild to bring out the game, some DLC, and the brand new sequel over the last couple of years. I got a chance, a long time ago, to see an early build of Party Hard 2 on the PC. While the upgraded graphics and larger area were intriguing, I saw a lot of “more of the same,” making me feel like the idea was progressing, but stagnating. Thankfully, quite a while has passed since that Early Access build, and now the full-fledged Party Hard 2 has come to the Nintendo Switch. Trust me: it’s more than just the kill now.

The story, at least from the beginning, is similar: you are a dude who has gone off his medications, is sick and tired of the filth of this world, and are finally doing something about it. Taking the entire vigilante terminology to bold new extremes, you will slowly infiltrate a series of parties, gatherings, concerts, shindigs, meetings and other locations in order to take apart wrongdoers brick by brick. Meaning, you’re going to stab, poison, explode and generally murder all those who have done wrong in the eyes of the player. This time, though, there’s at least a bit more direction from the very beginning, and our anti-hero has a lot of choices before him. Getting help, sticking to the minimum of justice, and even deciding to try to end the situation without violence. Then again, he could just bow to the voices entirely and murder everyone and everything: they didn’t stop this, so they’re just as guilty as the perpetrators. 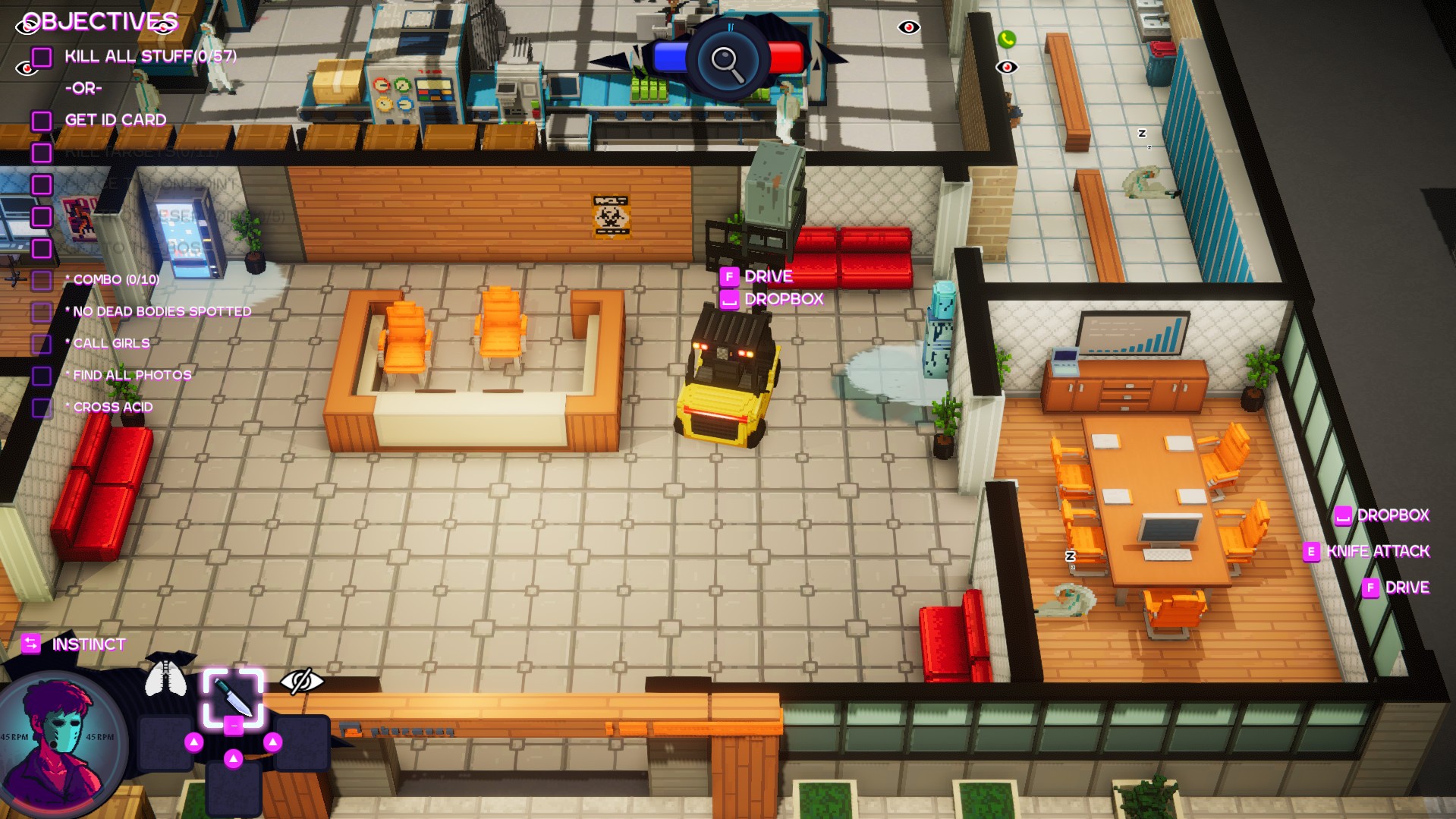 From the drop, players who have played the original Party Hard and didn’t like it should just check out immediately. This is not the massive, game changing, 180-degree turn that some game series experience. The core mechanic and approach – strategically murdering a whole bunch of people and not getting arrested – is the bread and butter of the saga, and doesn’t change a bit. There are a ton of new options and ideas within the game, but everything still boils back down to murderfest, and if that’s not the party you want to attend then don’t RSVP for this game. In that same vein, players who have gotten tired of the mostly same approaches again and again should consider one of two options. The first, most obviously, is not to get this game. If you were that bored by setting up speakers to explode or stabbing someone in the toilet, then you probably will not be over the moon with this one. The second, which is more convoluted, is to get the Deluxe Edition, which comes with three additional characters with different approaches to the game. While there are additional characters in the core game, two of them don’t unlock until after you’ve played a certain point, and the two that are ready are either the original Spree Killer(whose canonical name is Darius) and a new dude called Wannabe. Wannabe is basically an easy mode, giving you more health and stamina and allowing you to absolutely burn through a level. Wannabe also does not contribute to the four playstyle branches that you gradually increase throughout the game, so any hope to unlock goodies is firmly not happening without playing in the regular game.

What’s to be said about Party Hard 2? It feels like a couple of steps forward, a couple of steps back, and firmly landing back in the same position while being in a different area. The game certainly looks significantly better, having taken some interesting turns from the original, pixel-heavy approach of the first game. They haven’t entirely abandoned it: rather, Pinokl now presents a game that uses a combination of detailed, properly lit areas and props with slightly grotesque versions of the first character models and designs. They’re still pixel dense, but now they have these shadows and forms that almost feel like they’re a strange mockery of how the first game looked. Don’t get me wrong, I like it: the wrongness and the mildly upsetting feeling jives well with the game, and even makes familiar and new characters alike come to life in this bizzaro world of vengeance and mayhem. It’s just incredibly noticeable as you swap from the old, single screen sort of levels to these new, progressive scapes that involve great attention to seeing where traps, beings and weapons might be.

Party Hard 2 is doing its best to get the players more on board with different ideas and notions within the game world as well. As we mentioned, several levels don’t ask you to kill everyone, but just to kill specific people and destroy other things. That’s doesn’t mean you CAN’T do that (with some exceptions), and some levels even give you a choice to either hash things out with minimum homicide OR go ahead and kill everything: think of it as goal #1 and goal #2 in the scope of it all. The player now can craft different weapons if you get a good inventory going, and I do like the new inventory system. Holding on to multiple things at once is always helpful when it comes to how you’ll be approaching your next mark (or marks). Gone are the days of having one single item that may or may not be the crux of you being able to accomplish a goal. Now, you can have booze to get someone drunk (and away from the crowd), adrenaline pills (to give you that extra outrun speed), frag or stun grenades (to somehow inconspicuously clear a room) and the sun gun, which, in my opinion, is ridiculously OP, but we’ll get to that in a moment. You can also combine some things, like a lighter and lighter fluid, but I feel that this is both an egregious use of the term “crafting” and also something that a player isn’t as likely to use if they’re just doing story mode. If they want to appease an audience or have a spot of fun during a Co-op mission, sure, but that will not be how you accomplish things normally. 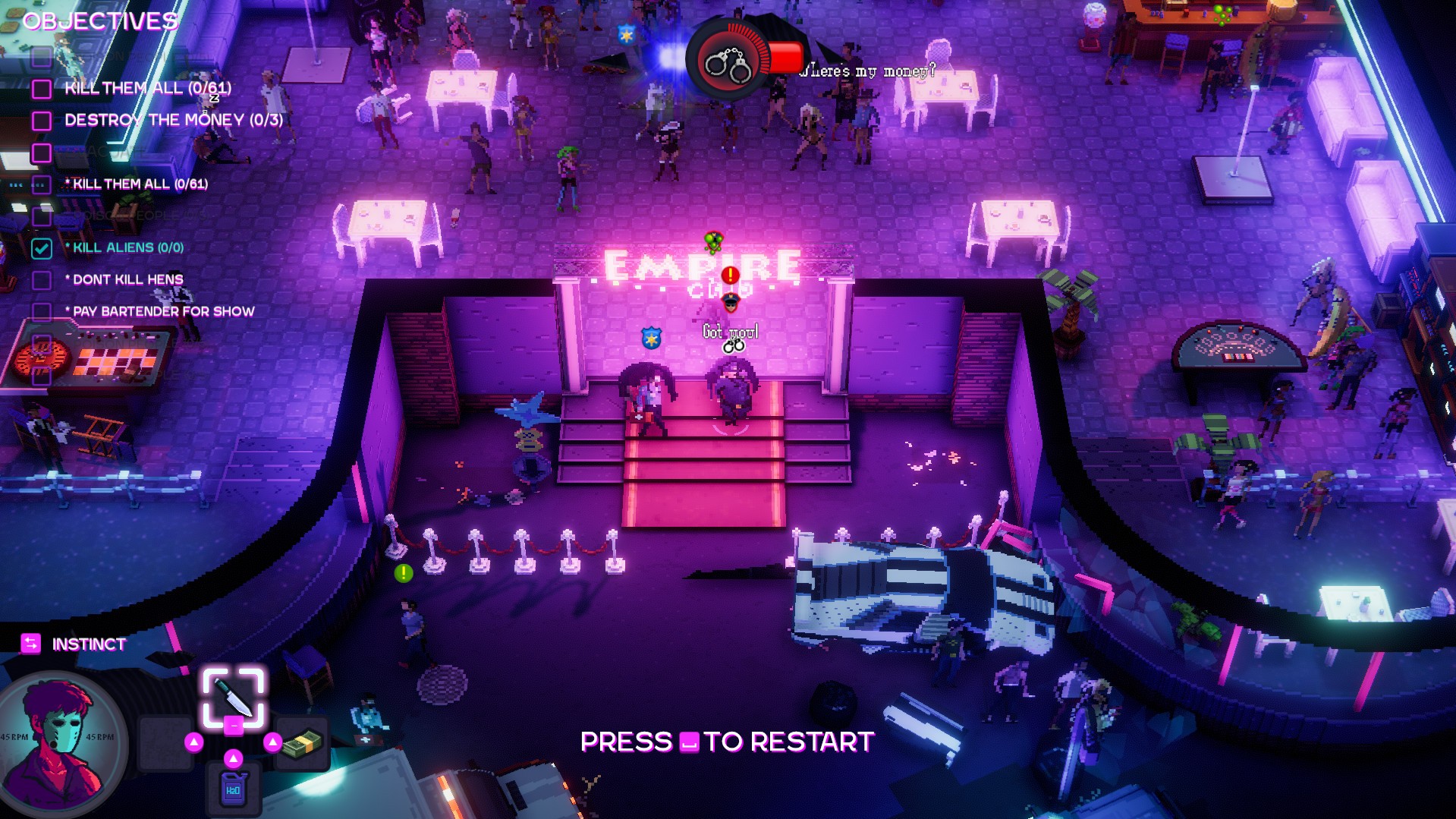 The stun gun plays directly into my biggest criticism and applause of Party Hard 2: police officers. In the original game, the police were the be-all, end-all “bad guys” that would take you out with no problems. If you got the cops called, you had to outrun them until they lost interest (which they’d stop doing if they were called a few times) or prayed you could be Kevin McAlister enough to catch them in a trap at just the right time. This game, however, makes the cops quite vulnerable in the grand scheme of things, and I don’t know how I feel about that. If a single cop approaches you, stabbing him and surviving your arrest is totally plausible with almost no followup from other units. If you manage to get the stun gun away from a cop or from a bouncer, now you’ve got a perfect defence against OTHER police officers, and you can even stun them in front of other people with no ill effects. Let me be clear: I have no problem with killing cops in this game, because it’s significantly more realistic than the first game, having you just give up and go quietly because the boys in blue arrived. My problem is that it can be TOO easy and takes away some fundamental problems of balancing the difficulty of the game. Murdering a bunch of people without getting caught is a fun exercise in strategy, and it goes out the window when you can GTA your way through certain stages without a lot of backlash. The cops are still more resilient, faster and more aggressive than other mobs, so it’s not a total crapshoot, but it’s a more viable solution than before, which I do appreciate.

The Nintendo Switch port also handles the game incredibly well, which should be a sigh of relief for many players. Despite the more robust areas and the confusion that can come from Co-op, there are zero issues in terms of slowdown or lag within the actual gameplay. Now, if you’re like me and you go full Bane and link together six explosions in a row, you will see the game start to strain under the pressure, but all the sprites will do so as well, so don’t worry about getting caught off-guard in the process. In fact, go ahead and enjoy the game in all its glory when things like that happen. Definitely crank the excellent soundtrack (which I can only describe as murdercore) and make sure you enjoy the insanity of it all. Plus, the incentives of extra goodies through the game tracks of Anarchy, Stealth, Mystic and Criminal drive you to explore bold new ways to enjoy the game, like summoning a UFO or doing subsequent playthroughs as a dude in a panda outfit.

Party Hard 2 is just a pleasure to behold, particularly if you were a fan of the first and want more with a bit of a spice within the gameplay. It justifies the price of admission with updated graphics, new mechanics and a killer soundtrack, and it keeps you locked in with unlockable things, craftings to discover, Co-op replay and varying difficulty levels to see if you really are a bad enough dude to literally murder everyone. I’m incredibly satisfied, and I think it’ll be another big success for Pinokl and tinybuild here on the console front.

We return to the scene of the crime for more strategic murder, this time with better weapons, stronger strategies and much, MUCH bigger explosions.