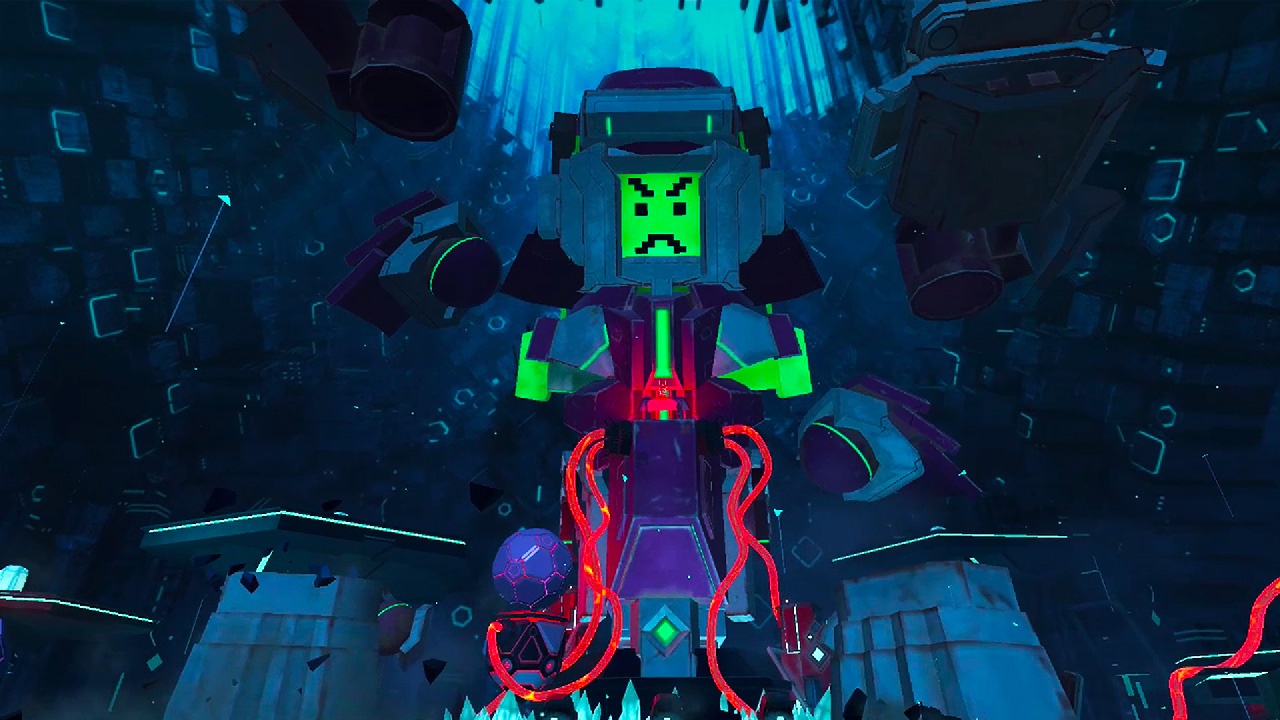 There have been some good wave shooters since the PSVR’s release that have made full use of the technology on offer from both the headset itself and the (last generation) move controllers with Shooty Fruity still holding my top spot. The new game on Sony’s VR system is ‘Blasters of the Universe’ from developer Archiact interactive, it’s a title that’s been around since 2016 on the PC and it’s now finally arriving on consoles losing none of its distinctive retro look.

Blasters of the Universe falls into the “Bullet Hell” gaming genre, I haven’t really played much of this type of game mainly because it’s mostly exclusive to arcades machines and various PC only early access options. To simply sum up ‘Blasters of the Universe’ is easy to do, it’s a sci-fi wave shooter that constantly bombards you with an ever-growing legion of attacking enemies that you must eliminate while avoiding their incoming fire. But the graphics, gameplay and overall gun customisation is far from simple and all credit should be given to the developer for really making use of the PSVR’s good elements.

Presentation in Blasters is very bright and very colourful with a distinctly Tron-esque cartoon feel to both the weapons you have and the enemies you face. Incoming bullets are immediately obvious in their bright orange and red colours, initially starting with one or two bullet patterns progression sees more enemies fill the screen creating multiple varying patterns and a steep but not overly frustrating learning curve. 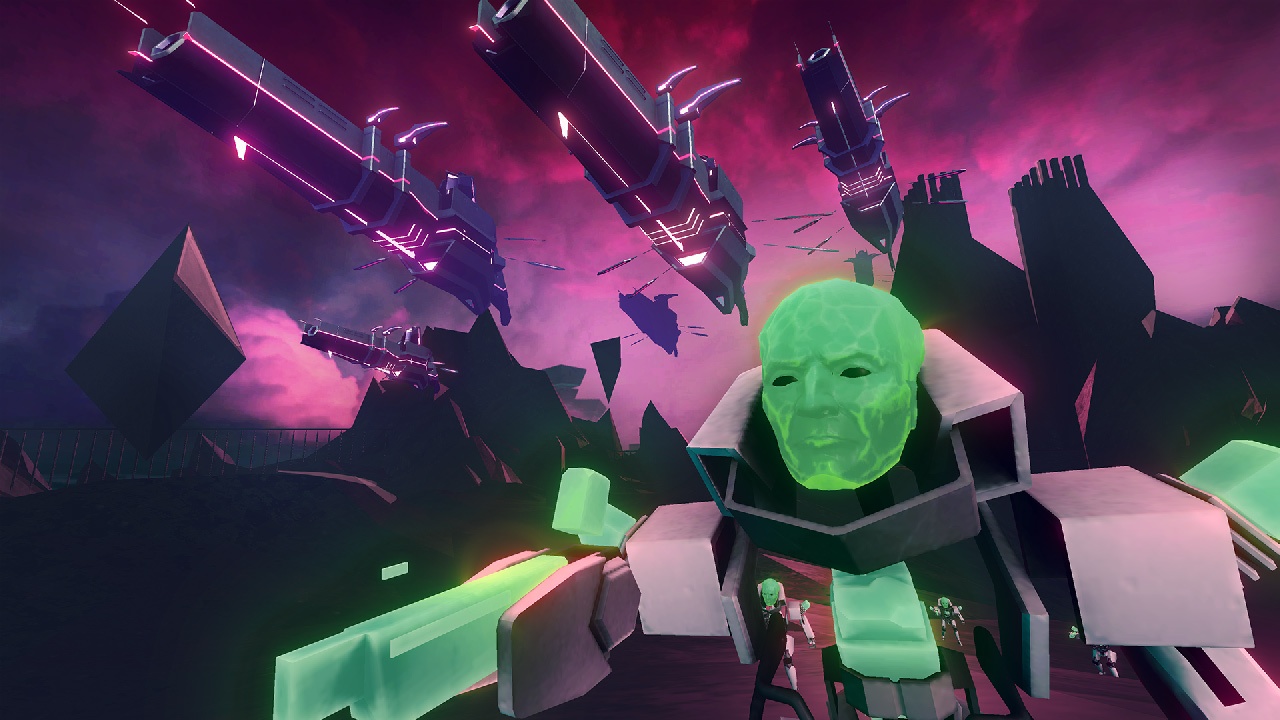 Single attack patterns now turn into bulk bullet patterns to either weave around or block with the standard rechargeable shield. Avoiding the incoming fire is a challenging task as you try to memorise the specific patterned attacks by the various duplicating enemies who appear from every direction, then planning your defence accordingly. Personally, taking out the harder multiple shot attackers as quick as possible while dodging the single shooters leaving them until the screen is a lot clearer and easier to finish was my theory. And once you have cleared all the attacker’s you face an end of level boss and these require more strategic planning as there’s normally a specific spot/s that needs to be hit multiple times and all are hidden behind their own defensive shields.

Movement is simplistic as you are technically fixed to the spot, dodging has been nicely limited to the head only so there’s no need to over exert yourself as a move of the head or tilt of the shoulders is as strenuous as it should get. But the VR implementation is so immersive and with the later levels becoming full to bursting of incoming bullets you can’t help but get the rest of your body involved, often full side to side shifts or ducks and at one point I jumped to avoid a large block of bullets, so I do recommend leaving yourself a decent play space to avoid injury or any damaged hardware. The VR implementation and tracking of the move controllers is perfect as I didn’t have a single miss-tracked bullet or dodging issue whatsoever during my playthrough.

The biggest positive in Blasters is in its gun customisation with a quoted “130,000 different combinations” that unlock during the campaign levels. This total includes multiple modifications, ammo and shield upgrade options to assist in gaining maximum points and help raise your stats in the world rankings on the online leader boards. The customisation section is an area you will probably spend most of your time in due to the almost unlimited options that are very generously unlocked throughout play. 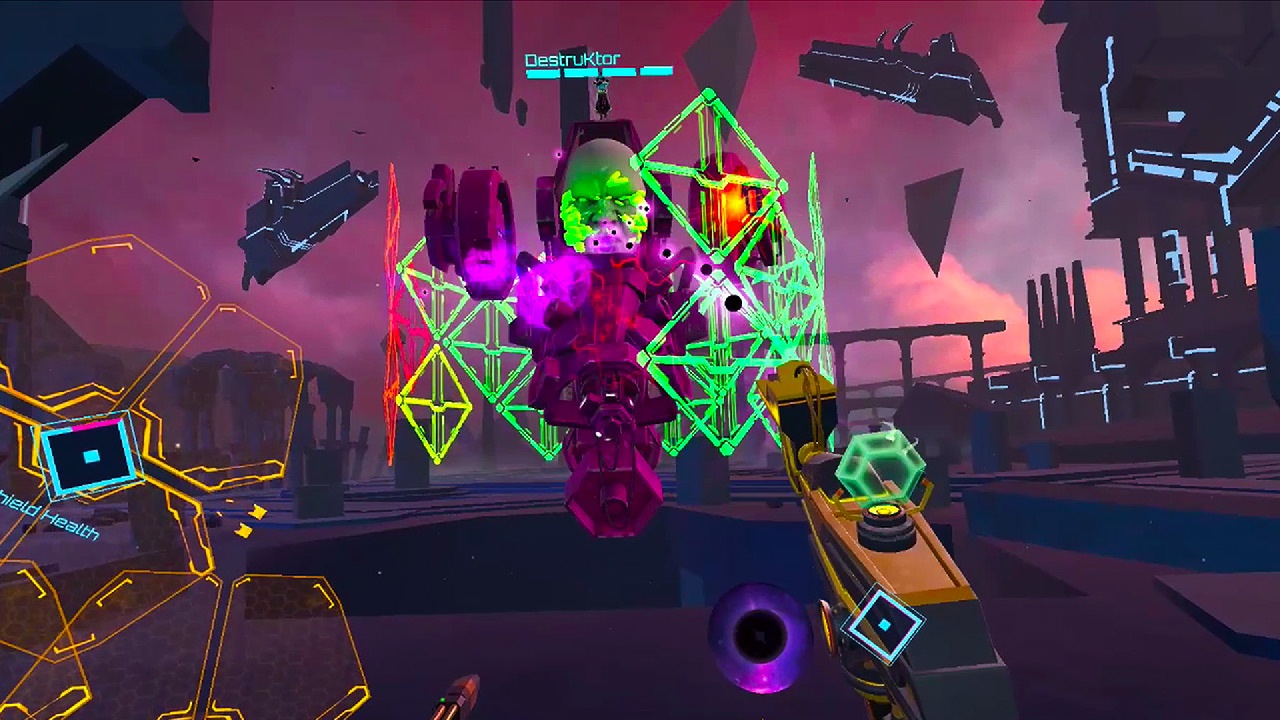 Adding and removing various gun additions or ammo upgrades and then testing out your monstrous creation on the firing range before entering the campaign levels is limitless. I personally spent almost an entire two hours creating and dismantling whatever gun combination I could possibly conceive of before playing level 3, only to find they were great to test on the firing range but completely pointless when faced with hordes of enemy’s. So, I do recommend spending quality time in the customisation area because it will pay off when you construct a decent gun and to be honest it’s just cool creating a gun with no limitations.

But, unfortunately there is a big negative in Blasters and that is the campaign playtime, it roughly clocks in at about an hour with only four measly levels to complete. However, you do unlock the harder setting once you’ve been through it once on standard but even that only extends the game by another hour or so. You are ultimately playing the same scripted four levels with just a few extras attacking enemies and once you start gaining the higher points and unlocking the more advanced customisations it becomes even easier.

Overall ‘Blasters of the Universe’ is a fun addition to the PSVR wave shooter catalogue with its bright 80s inspired cartoon presentation, perfect motion tracking and challenging but limited levels. It also has a decent trance soundtrack and a level of weapon customisation that I personally can’t see anyone actually fully using. But unfortunately, it does get a little repetitive once you have memorised the various scripted attacks and learn to counter them. It’s an exceptional wave shooter but critically damaged by it’s extremely short campaign.