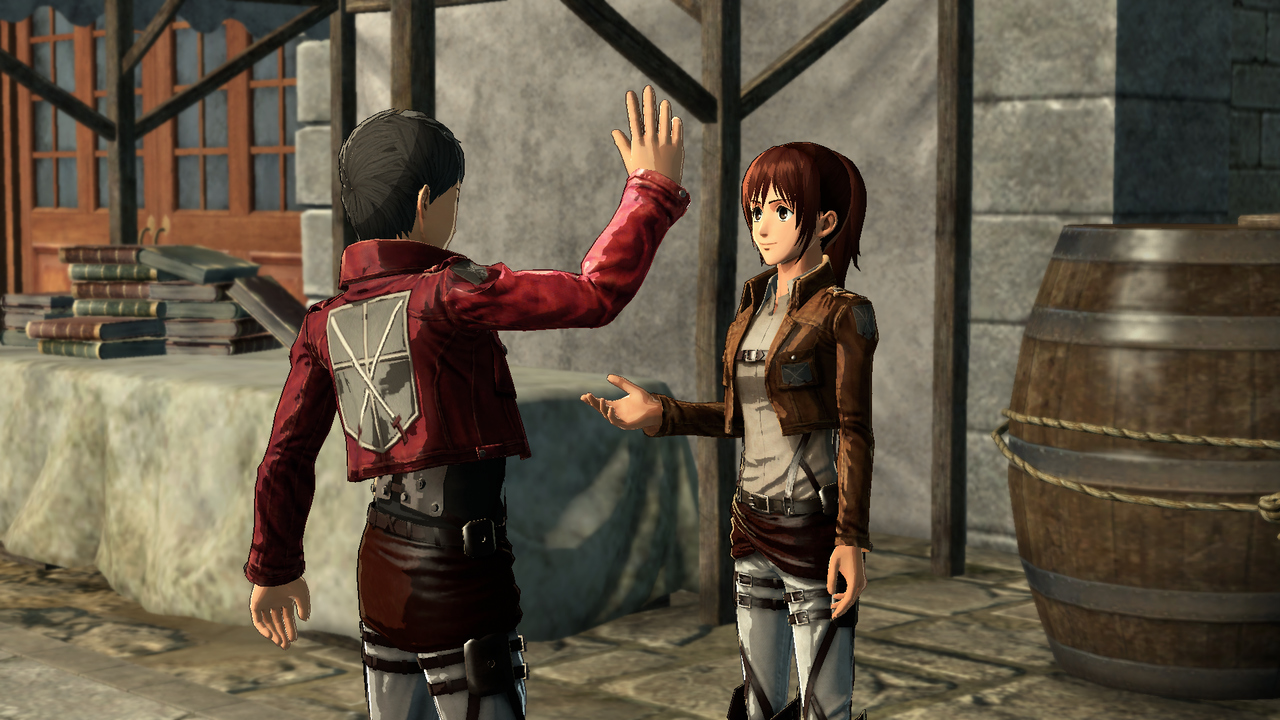 Anime games aren’t something new and if you’ve played enough you’ll know how mediocre they can be if handled badly. The first Attack on Titan game from 2016 sat somewhere in between average and great. Good news is developer Omega Force had taken notes of complaints from the first, such as AI intelligence and difficulty, in the hopes of making A.O.T 2 one of the better examples.

There are 2 main game options Story Mode and Another Mode. Story Mode is self-explanatory and follows the first 2 seasons of the anime. For those who aren’t a fan of the manga or anime – basically humanity was almost wiped out by giant humanoid creatures called Titans that appeared over 100 years before where the story takes place. Humans have been pushed back to a small area living behind three walls until a giant 200 foot tall Titan, aptly named the Colossus Titan, kick starts the plot by destroying part of the outer wall leading to the main characters, Eren, Mikasa and Armin fleeing for their lives and then later joining the newest group of cadets to save humanity and get revenge.

Instead of being stuck to playing the main characters you can create your own character. They shoehorn you into the story by saying you were there alongside the main three during the attack at Shinganshina with your plot being wanting to get revenge on the armored Titan for killing your parents. Your character is the ‘nameless soldier’ and wrote a journal explaining the events that took place, which is being read by a narrator.

You can make your character either Male or Female, you then select a preset from a selection that you can leave the same or you can go a bit deeper and change the options you would expect such as hair type and colour, eye size and position etc. Options are somewhere between limited and in-depth, one of the strangest parts about it is that certain aspects are stuck together such as eyebrow type and eye type. Clothes are particularly detailed and look good.

Attack on Titan looks like something that would play well in a game if done right. In the series fights involve characters flying around with Vertical Manoeuvring Equipment aiming for Titans napes to kill them. It’s something that looks great but could be quite boring to play but fortunately this game is far from boring. Just flying around the maps with the wires you shoot out of your gear is great in itself, if you’ve played spider-man games before, particularly the second movie game, you’ll know how freeing it can feel. On top of that there’s great satisfaction in slicing off Titans limbs , which is a good thing since that’s the majority of what you’ll spend your time doing in the game. 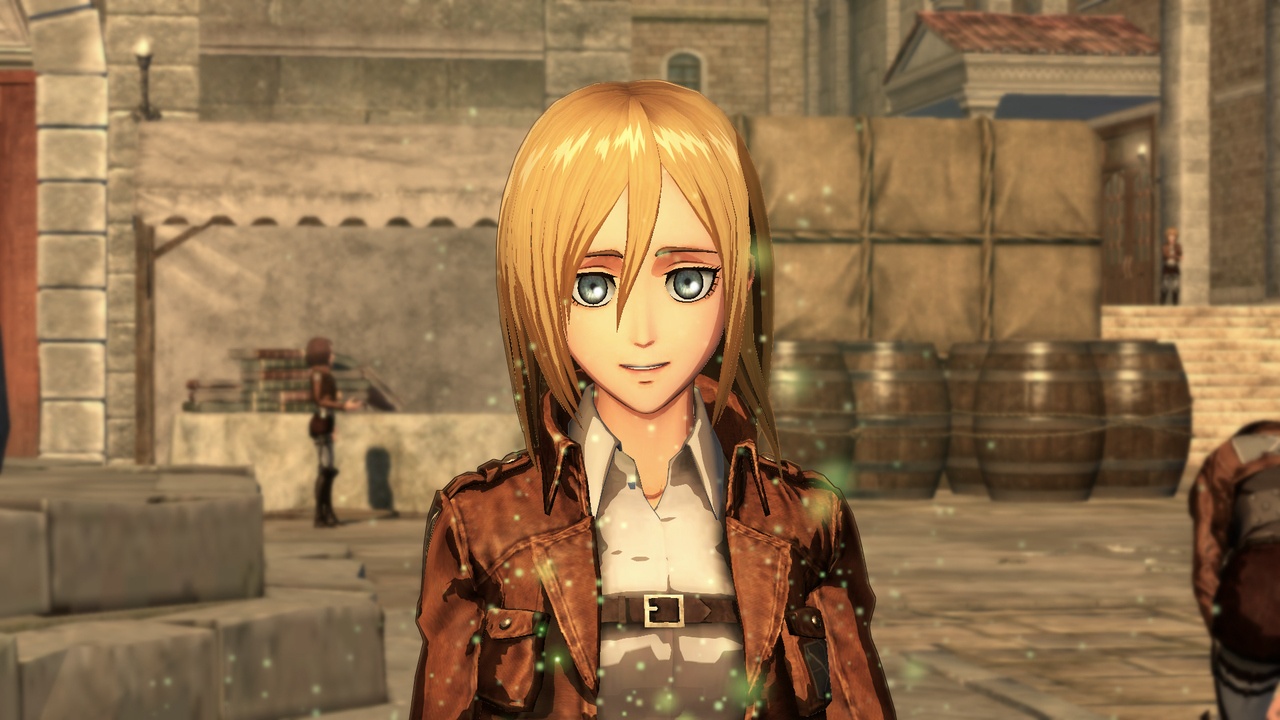 Variety comes in the different types of Titans, both in their sizes and shapes as well as types. Normal Titans act the way you would expect and move in similar ways and abnormal Titans are all over the place, crawling around or jumping with their limbs all spread out.

Throughout the story you get to choose from 3 options during conversations. Your choices won’t change the plot, but importance comes in the form of the friendship mechanic. Basically you can build friendships with many different characters from the series through completing missions with them and having conversations with them during the Daily Life sections of the game which is the downtime between missions. Levelling up a friendship will unlock skills and stat improvements, make training more successful and more importantly progress small stories that give you more of an insight into characters backgrounds and motivations.

You get exp from killing Titans, completing missions etc and levelling up gives you more max skill points where you can equip abilities such as those that increase stats and more specialised ones like reduced blade damage and gas consumption. You also get Regiment Funds that can be spent on buying equipment and materials as well as upgrading equipment which can either be by using materials to change it to the next type of weapon or reinforcing it by sacrificing 3 other pieces of equipment. Upgrading equipment has a tree system sort of like a streamlined Dark Cloud where after upgrading a weapon so many times it can branch off into 2 different types. Destroying certain limbs of Titans can give you extra materials, as well as creating a mining base in missions.

Side quests come in the form of scout missions where you must complete missions as part of an expedition, if you complete them without going back to base you get increased awards. Completing them gives you materials, money and wings of freedom which allow you to give opinions on regiment affairs (affecting NPC), using regiment services (such as training) and upgrading bases. There are also side objectives in every mission where a green flair will highlight a character in distress that you can help. During scout missions you can choose a character to deploy with you and this will increase their friendship level, but this is limited to ones with pages in the scout journal.

Part way through the game you unlock the ability to capture titans. There is a list of types of titans to catch and doing so upgrades your research rank that unlocks items to use in missions such as Molotov cocktails etc. 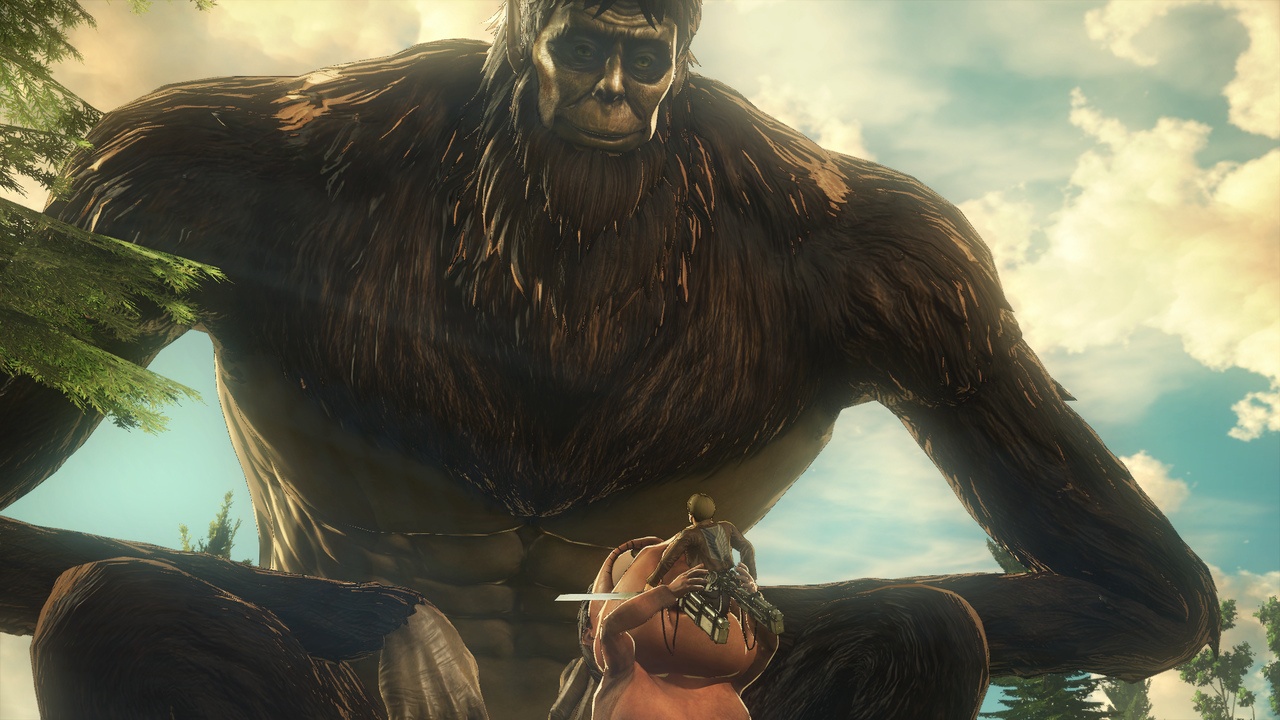 The main story took me around 12 hours to complete but the last 1/3 of the game I stopped paying attention to Daily Life and just cracked on with the main missions, going for somewhere close to 100% completion only in the story mode could see you racking up in excess of 20 hours.

Outside of the story, the other way you’ll spend most of your time in A.O.T 2 is Another Mode where you can play as your favourite characters, and has a wide selection of around 40 (before any DLC). Game modes come in the form of the scout missions from the main story, progress in these missions carries over between each mode as well as equipment, materials and wings of freedom but each character has a unique level and varied base stats. Other than to play as varied characters, the main draw of this mode is multiplayer. You can play cooperatively or versus with 8 players. The competitive mode, Annihilation, involves trying to score the most points – earned by killing titans. As well as this you can answer distress calls and play through story mode with other people.

One of the bigger anticipations for fans is the ability to play as more of the main Titans then you could in the first. This is something I was very disappointed by, in the main plot there are no missions where you can play as one (which makes sense for the story but is still disappointing). You don’t actually unlock the ability for other characters until way into the story mode. If you pay attention to the friendship mechanic there are side quests where you can be in a team with a character who can turn into a character, triggering them in combat will transform them and you can then take control of them. The main place you’ll be playing as them is in Another Mode but the game didn’t explain it very well, the move they say you have to do to trigger it didn’t seem to work but whether I had to do more missions, or buy particular things eluded me. Since I mainly focused on the story (as it was so long), I only actually played as a Titan once and it was with Eren. During the mission I transformed once, it didn’t really last long and didn’t feel satisfying at all. You can move around doing regular and strong attacks as well as charging up for a rage attack. I’m sure during Another Modes multiplayer with friends, having playable Titans running around could be great fun but it’s not something I experienced myself.

On top of the modes and gameplay mechanics, graphics are a real treat and look like the anime but 3D. Cut scenes are done in a similar vein but there’s a weird filter over everything, a sort of mucky brown which may be trying to emulate the fact it’s all memories from a book, but it just looks dull. Performance is silky smooth, I only experienced noticeable slow-down in the last couple of missions when buildings were being destroyed left, right and centre.

Even after the lengthy story mode there’s even more to do. If you’ve kept on top of friendships you’ll have all of the characters ready to be played in Another Mode as well as the harder story mode you unlock after finishing the game, Inferno Mode. I could see myself coming back every now and then  but the sheer length of the story mode has left me satisfied for now. Fans of the anime will most likely rejoice and newcomers can find a lot of enjoyable aspects to the game.