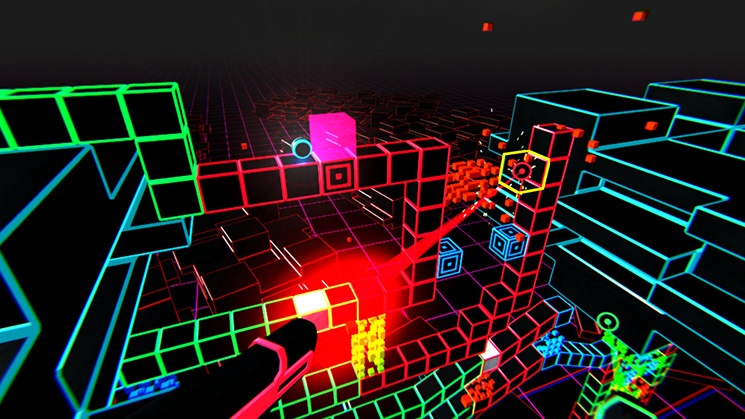 There’s definitely a huge obsession between some modern electronic culture and the neon pop of the late 80s and early 90s. Besides the fact that things like synthwave, vaporwave, retrofuture and any other number of musical genres born out of “inspired” throwback style are huge (and pretty damn good), there’s also this whole notion of breeding and building a bunch of games that are aesthetically connected to the generation of yesteryear. It’s more than likely due to the fact that the children of that age (Xennials, if you will) have come to full fruition and aren’t as embittered as their predecessors, but also not as connected as their underclassmen. The result is yearning for what was while still being aware of what is and what could be. That almost seems like the perfect analogy for what brought Neonwall to life, and how it executes here on the Nintendo Switch.

Don’t even worry about the story: trying to unpack the plot is easier than unwrapping a thing of Dunkaroos, and even easier to see where the inspiration came from. One dark and stormy day, a faceless gamer steps away from the Caveman Warriors cabinet (nice callback, Jandusoft) and decides to try a quick game of Pinwall, which is the simplest pinball machine I’ve ever seen. Lightning and bad luck makes our player get sucked into the game, which then immediately changes perspective and style and stops being about pinball all together. Now, our player must use fast reflexes and good aim to successfully navigate a ball down a colored pathway in order to…get home, maybe? There’s no dialogue or written words, so you gotta just go with it and be like “Hey, sometimes we get sucked into arcade cabinets. This is why arcades all closed down, too many missing kids.” 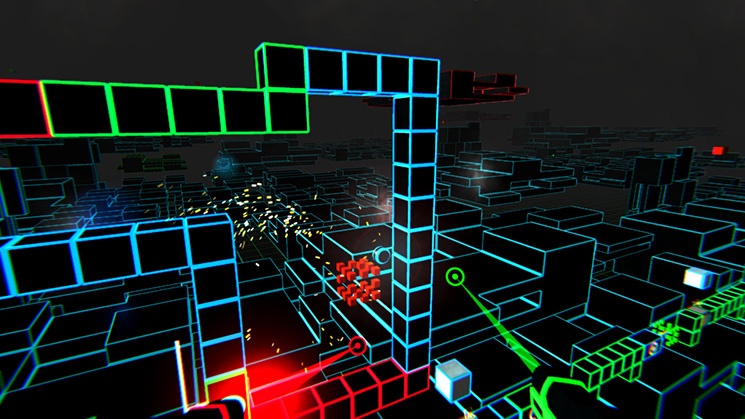 Controlling Neonwall relies entirely on three important things. One, that you’re not colorblind: if you are, I’m sorry to say this will simply not work out for you. There’s probably a way to bruteforce your way through the game, but it would be long, unfun and probably painful. Two, that you’re cool with a totally arcade approach to problem solving. You’re primarily using the shoulder buttons on either Joycon and the twin joysticks to control everything. And three, that you deeply, deeply enjoy the core concept of the game, which is propelling a ball along a lit pathway and changing the ball’s color in order to match the floor. If you’ve got these in the bag, then you might really enjoy Neonwall.

Neonwall drops the player in and quickly explains things with momentary pauses in action to move you along. You find out there are a few different types of levels, from racing and problem solving to fast reflexes and careful planning. In all cases, the central idea is that your ball will move faster if it’s the same color as the floor, slower if it isn’t, and could very well fall to its death if you’re not careful. Neonwall likes to introduce a bunch of unexpected elements that you’re sort of ready for but not really. For example, Neonwall tells you about the disappearing bridges that you’ll phase through if you’re not the right color. Alright, fair enough. But it only gives you a momentary heads up before also letting blocks fall from the ceiling and either impose to stop you from rolling backwards or almost crushing you. I never got crushed, but does that make the danger any less real?

In terms of visuals, Neonwall does a bang up job of capturing the atmosphere and light of a classic arcade game without going too chintzy and making it with a CRT filter or anything like that. Instead, you have bright, bleeding colors that pulse and really draw the eye and remind you that you’re in an arcade game. This isn’t some demure RPG or grizzly action game, you are moving along in a game that’s meant to compete for your sight and sound at all cost, and, interestingly, your sensations as well. Jandusoft actually has a vibration adjustment bar, something that is incredibly rare but desperately needed in most Nintendo Switch games. I hate the noise and the jarring sensation of having high strung rumble, and being able to tamper that down to the lowest setting without turning it off entirely was really dope. 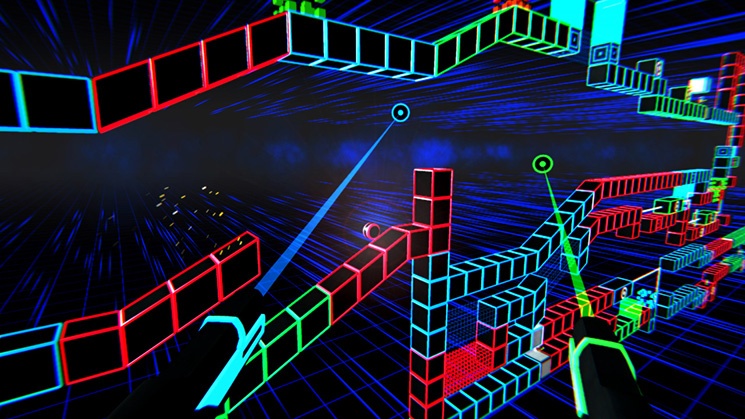 And the puzzles of Neonwall are actually pretty spiffy. While I was ready to dismiss the game after the first couple stages are so easy, things quickly get hectic and complex as you need to keep an eye on your ball and actively blast away chucks of wall to keep moving but also not accidentally blowing a hole in the floor that’ll keep you alive. You have to be borderline frantic to swap out the colors of your ball fast enough, and you also have to be very, very aware of where you’ve moved your cursor. You don’t need to have the ball in the crosshairs to paint it, and I sometimes forgot if my left was still my left or not. This resulted in applying the wrong coat to my ball, having it phase through the floor, and needing to do the whole damn thing over again.

But Neonwall does everything in such a fluid and inoffensive way that I wasn’t mad when I made a mistake. Rather than be a flaw in the game or the design, it was very clear it was a flaw in my own execution, and I didn’t need to repeat it. I wanted to keep playing, like I had a quarter lined up and it was still my turn until the big kid behind me cleared his throat audibly. You get sucked in on the simple task of getting your ball through the maze, and you want to do better, clear better times, make better moves and swap colors faster to shave off precious seconds. There are evenly placed spawn points so that larger levels don’t ask you to start from the very beginning as long as you still had some lives in reserve. And, when it all comes together, it’s satisfying and rewarding.

Neonwall may not grab your attention at first, but it’s deserving of your attention nonetheless. Well build and solidly designed, this puzzle arcade experience is fun and challenging in a way that you can only get from a good passion project that’s given proper room to breathe. If you’re like me and looking for the next great pocket game that’ll take seconds and stretch them into hours, you may have found a totally radical home here with Neonwall.