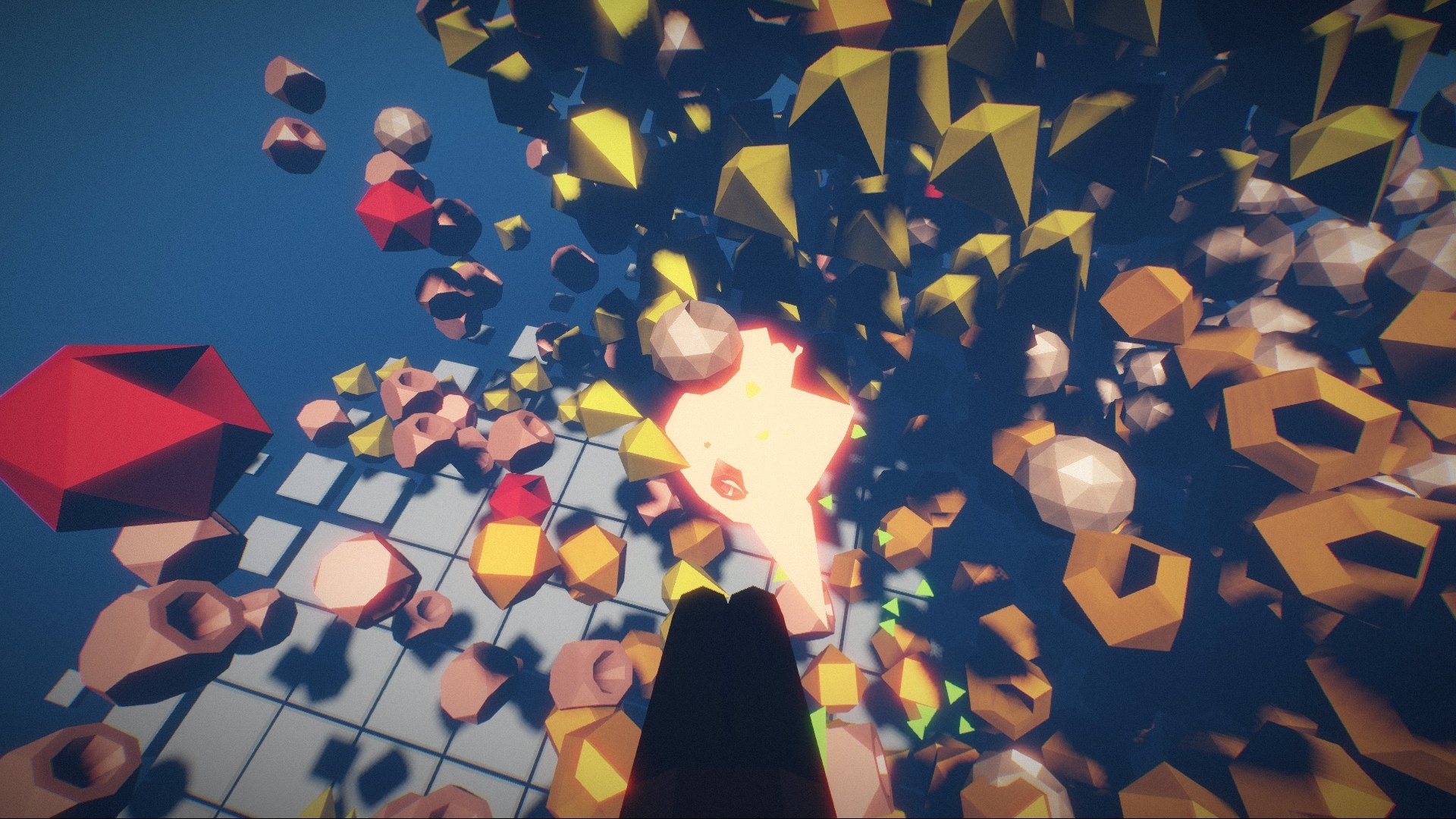 Swarmlake kind of came out of nowhere for me, and I must admit that at first glance it didn’t really look like something that I’d enjoy. However, after learning that it was developed by Dominique Grieshofer, who developed a pretty neat small first-person platformer called Refunct, I got my hopes up, and surely enough, when I got my hands on it, I was not disappointed.

Swarmlake is best described as first-person arena shooter, where the whole point of the game is to survive for as long as possible while also collecting gems that enemies drop when they die, in an attempt to reach the highest score possible. The game takes place in an arena that keeps expanding in the direction you’re moving, so even though it might look like you might fall off the edge, that isn’t the case. 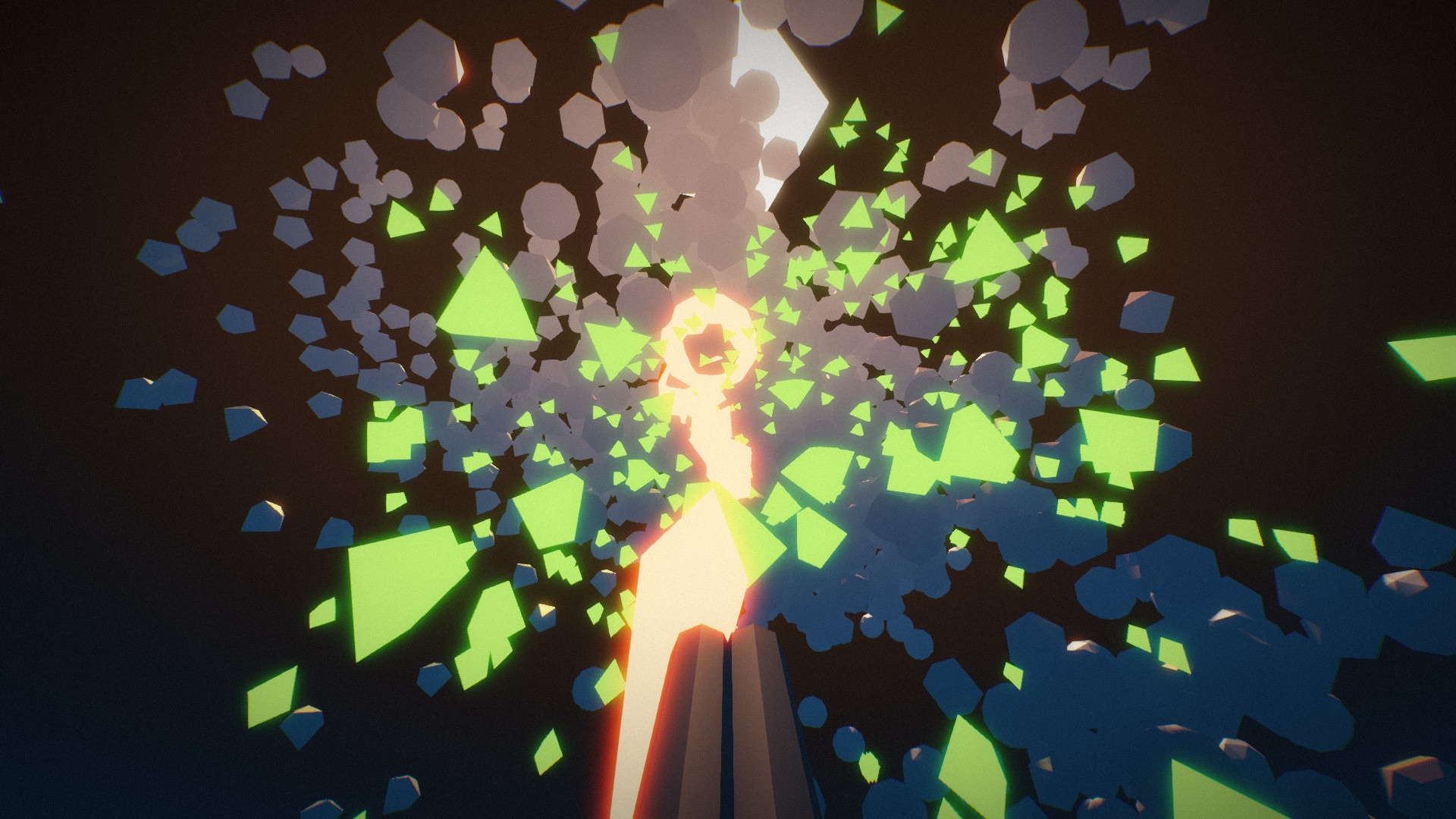 Now, this isn’t your typical arena shooter, in the sense that the difficulty arises from an ever-increasing number of enemies, up to hundreds if not even thousands of enemies all at once. Now, I’m not sure if these waves spawns are random or happen every few seconds, but either way, things are so chaotic while you’re playing the game that I believe it isn’t even humanly possible to keep track of such a thing if it even exists. Another cool thing about Swarmlake is the fact that you’re always shooting, you don’t even have to press your mouse button, the game does it automatically for you, which I really appreciate. With that said, left clicking with the mouse will fire a shotgun-like blast, which is better suited for some situations where you see a bunch of enemies coming straight at you, but also, and more importantly, it can be used to propel yourself into the air so that you can “fly” around swarms of enemies and avoid them completely, which is a must in this game.

There are a handful of enemy types, but you’ll die if you simply bump into one of them regardless of the type. With that in mind, you have to prepare yourself for some frustrating runs in which you slightly mess up your movement and bump into an enemy and you have to start over. There are these yellow shaped arrows that spawn every few seconds in front of you in a line formation, and after passing by you they will turn around and chase you. There are also these red orbs that appear to be bulletproof, but they will bounce back shots which helps in dealing with other enemies, but if you run into them, they will explode and turn any nearby enemies into gems which you can collect to increase your score.

I’ve seen a lot of people comparing this to Devil Daggers, but I think that their similarities kind of stop in the fact that they’re both first-person shooters which rely on constant movement. In Devil Daggers, there is a set time for each wave of enemies to spawn, and you can easily get a pretty good time on it once you learn the patterns. However, in Swarmlake things are much more random, enemies seem to come out of nowhere, and you’re not limited to an arena like in Devil Daggers, you can just keep moving and flying around while avoiding the enemies. To that end, Swarmlake is all about managing the number of enemies on the screen and always making sure that you have a clear path to escape from the swarm that tends to amass behind you. 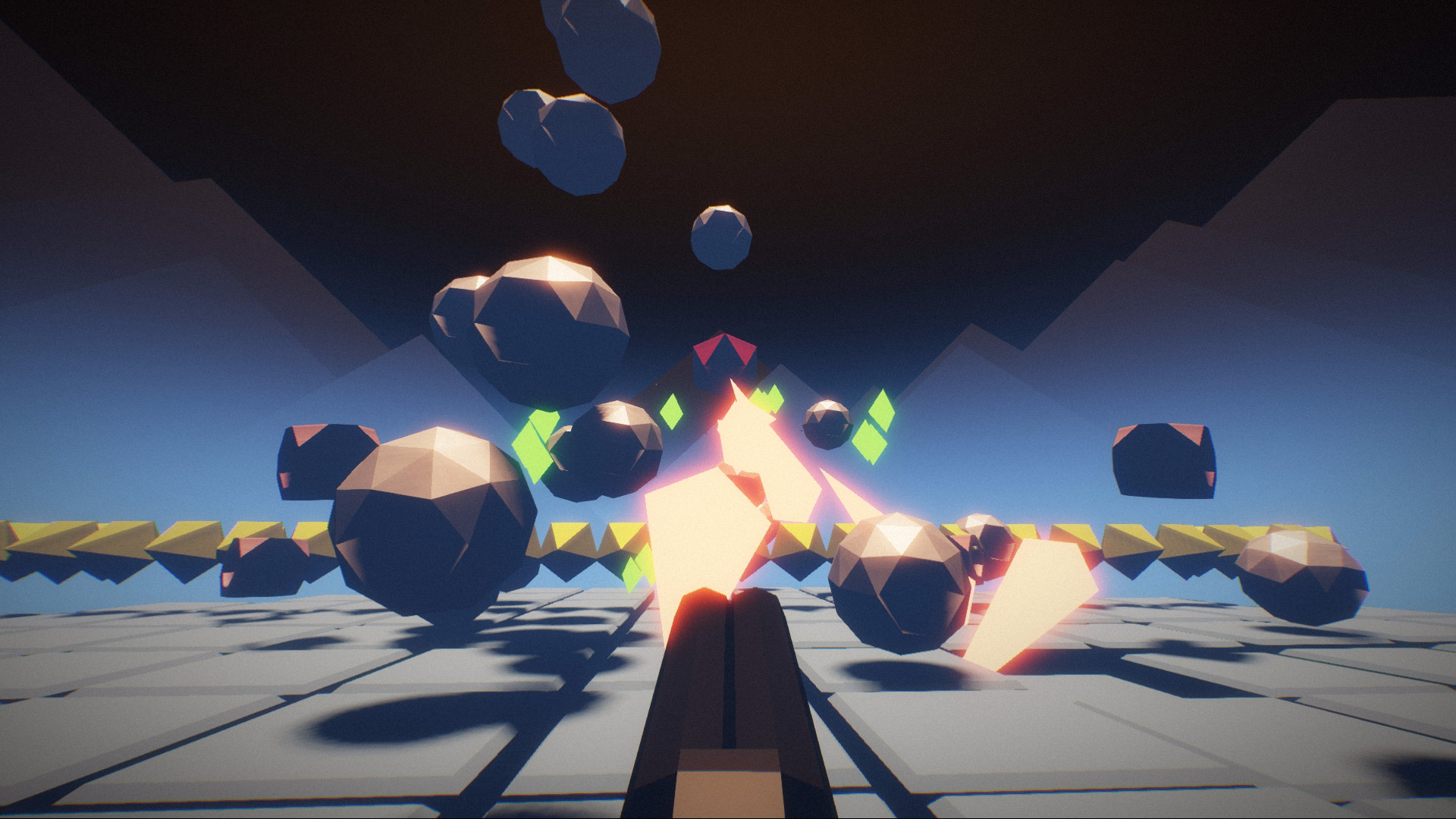 The more you play the game, the more you’ll find yourself elaborating a strategy on the go that works with your play style and skill in order to overcome the ever-increasing waves of enemies. As far as I can tell you can’t really stop enemies from overwhelming you, you just have to play along and move with the flow, as if you’re leading a charge of this swarm into nothingness. In the end, this all results in an extremely chaotic and hectic experience that always had me on the edge of my chair.

Do not be fooled by its simplicity in looks and mechanics though, as this game does what it set out to do pretty damn well. Swarmlake is fun and addicting, and if you’re into it as much as I am, it will always leave you with that craving for just one more run to see if you can do better this time. The low poly graphics style makes it easy to figure out what is going on, and the game also features a pretty great soundtrack that fits the game quite nicely and keeps going even after you lose and start over. For the price, Swarmlake is more than worth it for what it is, it might not be a groundbreaking game, but it surely is one that will most likely provide a few hours of fun if you’re into first-person shooters or score based games like this.