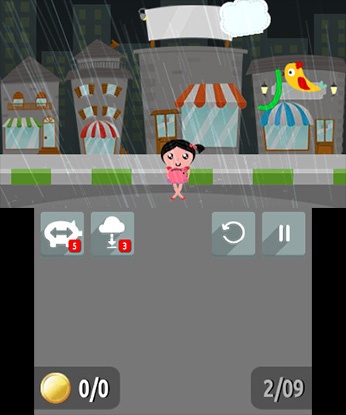 Raining Coins is a fun family oriented type of game from the developers at Crazysoft Limited. With gorgeous story book animation and addictive gameplay, the game centers around a little girl named Eve who wants toys she can’t seem to afford at the moment. It isn’t until the sky opens up one day with raining coins that Eve can finally buy the toys she loves if she keeps saving up for them. The game is an attractive game in many ways and one can not help but be engrossed with the cute child-like animation and the four immerse worlds the game has to offer.

Raining Coins has one simple objective for each round. Catch all the coins in each round and move on to the next one. The game has more than 80 rounds of game play, so each round becomes more complicated than the last leaving a bit a challenge not just for the kids but for parents to play along side with their kids. The game also offers a bit of a challenge even for those that are not children to take part in the fun. The game also offers a mode where players can dress up Eve with lots of cute skirts, costumes, and accessories as players compete in each world and complete each level. The game, although one player even has an extra help feature as the journey for coins becomes that much more complicated. 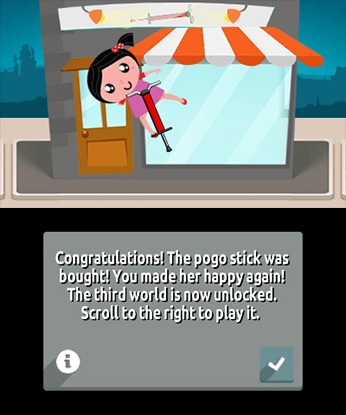 Graphics also change according to the weather conditions for each level throughout the game while little things are added here and there to also prevent players from capturing all the coins. These are great little features that give the game a little more body , creating not only a more immerse game experience but also keeps the game from getting stale for long continuous game-play.

While the game is pretty simple in its premise and great in terms of animation and difficulty, the game mechanics somewhat suffer in this regard. Being that the game is made for the 3DS, the game questionably forces players to use to the control pad instead of the joystick. The joystick would have allowed more fluidity in terms of movement to catch the coins in each level. Since the difficulty becomes more intense as you complete the levels and reach new worlds, the control pad seems a bit restricting in terms of movement even with the help feature acquired at times. 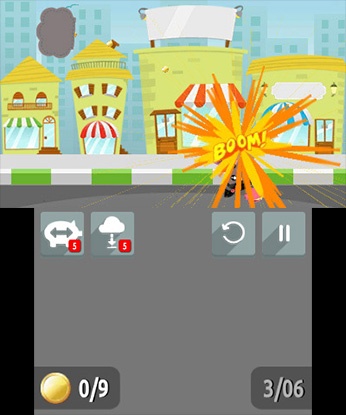 Eve as a character also seems a bit slow throughout the majority of the game as well, leading to some of the coins falling out of place at times when they fall into her piggy bank. While some might not mind missing a few coins here and there, missing entire clouds of coins at times becomes a little frustrating as the levels become increasing harder.

Despite these minor setbacks in this indie title, this is a crafty simple title is a nice time waster for kids, teenagers, and adults. More importantly, for an indie game, the massive content inclusion of four worlds and so many rounds shows the time that was spent trying to make this game a fun experience for everyone. While the date is yet to be announced on this little treasure of an indie title, its to be expected that this game will be a quick little crowd pleasure for children and parents for those long appointment waiting times or even as a nice lunch break time killer.