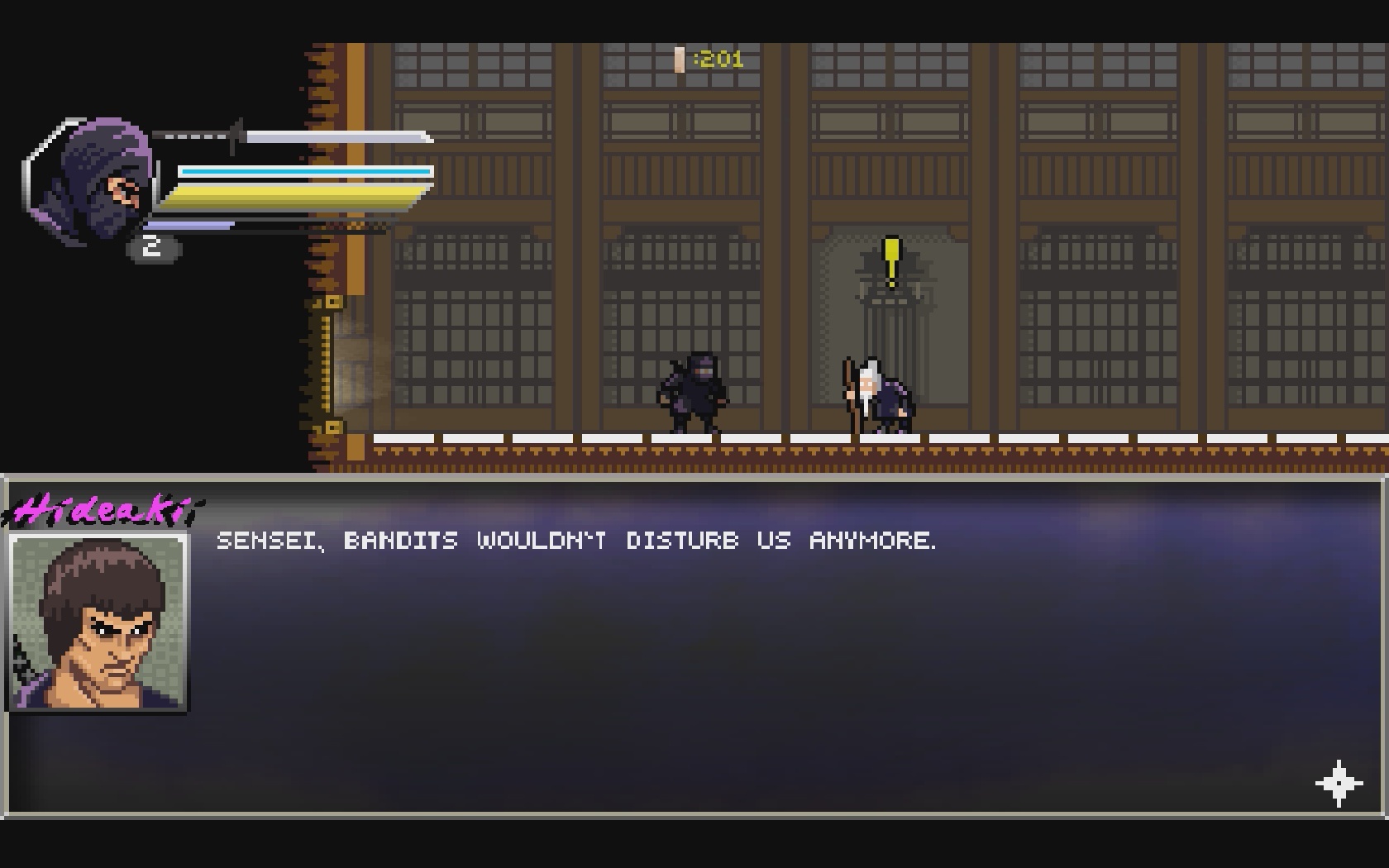 When I was in my early childhood, I remember distinctly in Pre-First some questions they asked my classmates and I. One of the most common ones was “What do you want to be when you grow up?” Of course, my response was a concoction of being raised by Saturday morning cartoons, video games, and whatever was being bombarded at my brain during the 90s. My first answer was ninja-astronaut-cowboy-police officer. I would learn later in life that this was not an acceptable answer. When I got older, I learned to just embrace what I loved and leave it to the professionals.

Pixel Shinobi  is a fine interpretation of the ninja genre. The formula of this game is grounded in the classic platforming aspect of the game mechanics, but it also adds more. The core elements that comprise Pixel Shinobi are the platforming game play, stealth detection mechanics, expansive RPG skill tree, and crafting system. These elements mixed with the homage to 8 bit art make this game a strong entry into the Metroid-Vania genre.

As flexible as ninjas are, Pixel Shinobi offers the ability to use keyboard or game pad controls. I used the keyboard controls as my primary form of game play. Compared to their game pad counterpart, they were simple enough to adapt to. The game also allows you to customize your control scheme if needed. 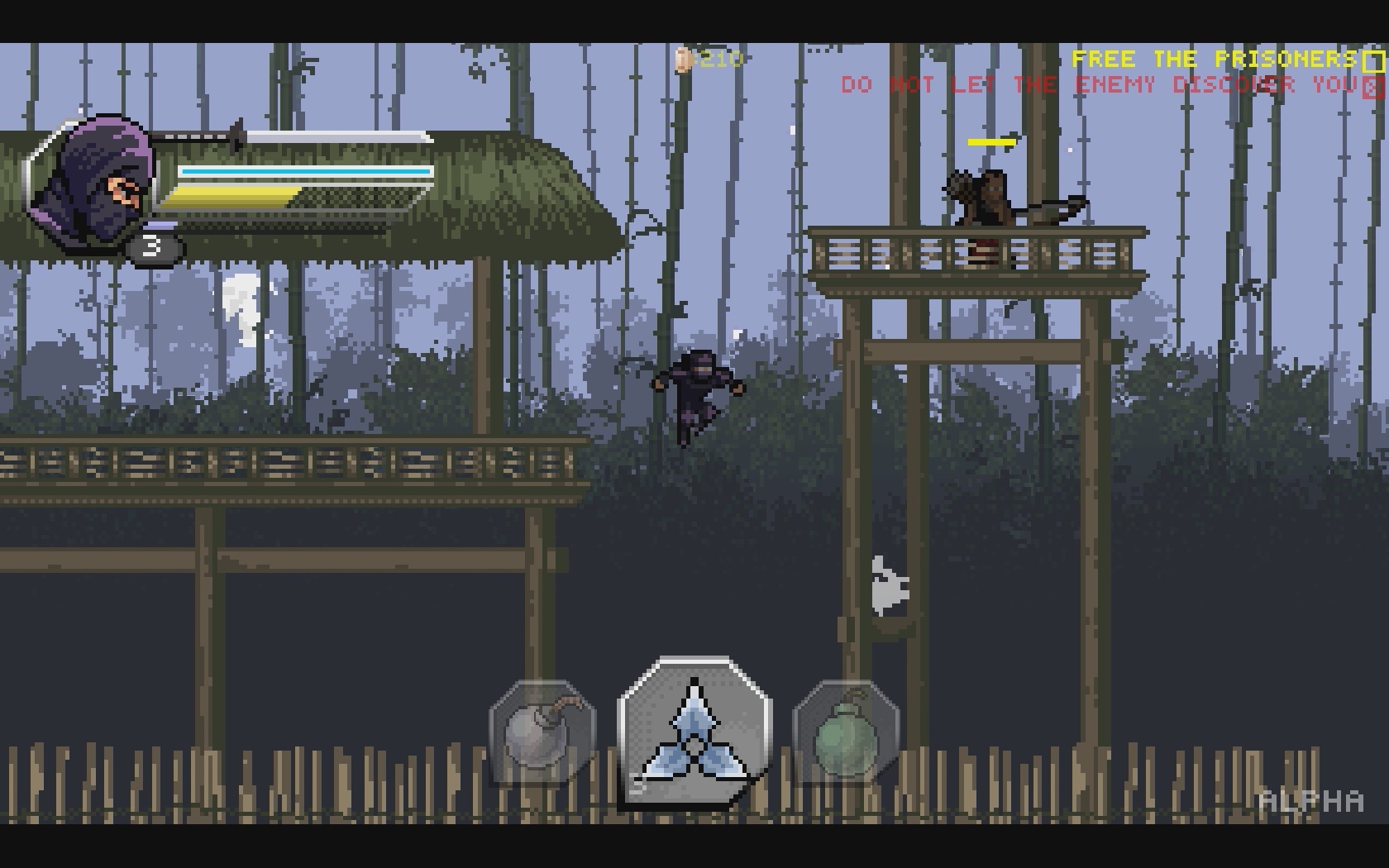 The story plays out in a straightforward narrative. In ancient Japan, the last Shogunate loses control over its dominion. This breaks into a civil war and among those that rise up from that war, a specific clan decides to break off and take things into their own hands. The leader of this clan worships dark entities and does things that are forbidden in their culture. Eventually, through this dark worship of entities, it infected him with the spirit of a vengeful Samurai warlord. He takes his clan and spreads his reign of chaos throughout the land, but one clan detaches and stands as the last hope against this plague. Now, it’s time to cleanse the homeland.

One of the best things of Pixel Shinobi is how it gets back to basics. The setting isn’t set in the present or future, nor is the protagonist fighting aliens, robots, zombies, or anything outlandish. You are set in an ancient setting, fighting enemies that have basic weapons such as staves, swords, and some throwing weapons, but that’s it. This game sticks to what is grounded in reality and builds upon that as you progress in each level.

Another thing that Pixel Shinobi nails is the skill tree. After each level, you are graded based on mini objectives you achieve throughout the level. This involves how many times you are detected, enemies killed, assassinations, and other things. You will gain points based on these achievements and then you are able to spend them in the expansive skill tree.

The skill tree gives you the power of options. Each ability that you unlock strengthens your character by best suiting a specific play style. Do you want to deflect enemies easily with blocking? Then dump your points in the blocking skill. Or if you prefer a more offensive stance, wanting to dispatch as many enemies as possible, put your points into dealing more damage either unarmed or with one of the many weapons you can craft.

As simple as Pixel Shinobi appeared on the surface, I was impressed with its intricate crafting system. As you return to your home village, any crafting supplies you get from each area you play through can be used to craft weapons that are either melee or projectile based. This allows different play styles to be explored and creative problem solving as you continue your quest to dispatch anyone that gets in your way. 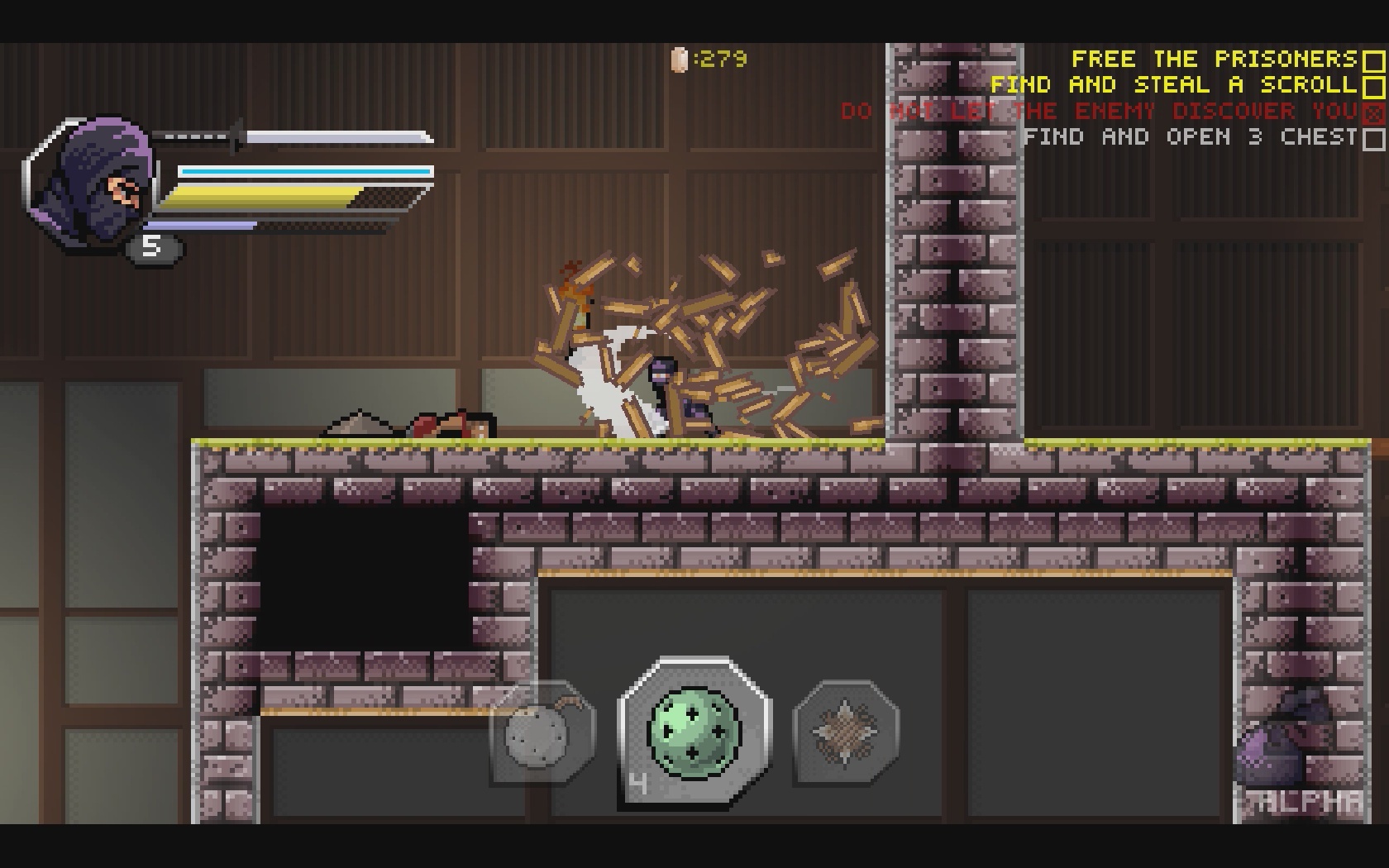 As of March 14, 2017, Pixel Shinobi has an updated 20 levels and 4 bosses. The developer does a great job supporting this game with free updates and keeping in touch with the community on its Facebook page. There are also some guides and walk throughs available on the Steam Community HUB for new players to take advantage of when adjusting to Pixel Shinobi’s unique mechanics.

The only drawback I found of this game was the learning curve. Before I knew each level was graded based on objectives achieved, I went through and slashed all my enemies. In addition to that, I didn’t realize that if I didn’t learn the countering/block system well, I was easily dispatched in a matter of swipes from their blades. I also learned that hiding and timing my attacks carefully paid off later, as it usually resulted in a satisfying decapitation of my foes or stunning them enough to take them down with a combo. It will take some time, but it’s a good investment to learn the mechanics to improve upon each level you complete.

At the end of my initial play through, I’d have to say that I’m impressed with Pixel Shinobi. As I’ve stated before, it doesn’t strive to reinvent the ninja platformer genre, but instead offers refinement. I’d recommend this game to anyone looking for a good, layered RPG action platformer game that doesn’t mind being patient enough for stealth or wants to experiment with different ninja based weapons.